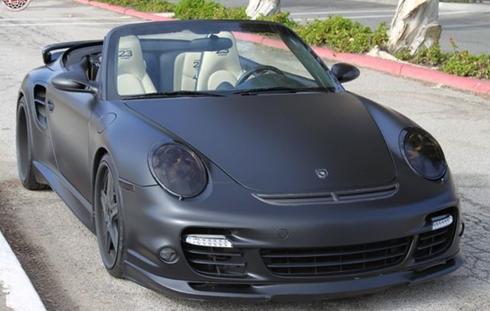 David Beckham seems like a genuinely nice guy. In the articles and interviews we've read, he's come across as intelligent, affable, and not too full of himself -- no small feat, considering that most soccer fans and advertising directors think he's a demigod. We don't fully understand Beck's affection for his sharp, pointy wife, but she's probably lovely once you get to know her.

There are, however, two things we will never, ever understand:

1) The celebrity fascination with matte paint jobs: Matte paint looks like primer, and when we think "cars doused in primer" we don't tend to think "upmarket". We think of our third cousin Earl, whose half-restored Caprice has sat in front of his mobile home for the last 15 years.

2) The rationale for paying big chunks of change for celebrity cars (with matte paint jobs): Is it for the collector's value? Because we don't really understand collecting either. If we did, we would've stocked up on Lladro figurines and Franklin Mint chess sets years ago.

By now, you've probably figured out that someone coughed up more than $217,000 for Beckham's matte black 2008 Porsche 911 Turbo. The buyer chose to remain anonymous, but our money says it's Simon Cowell. (We're only half-joking.) Get the full report at Motor Authority.