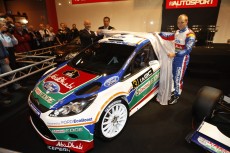 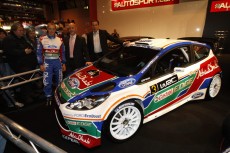 Ford factory WRC driver Mikko Hirvonen and much of the world rally team was on hand in Birmingham, U.K. today for the unveiling of Ford's new Fiesta RS WRC entrant, set to take the place of the current Focus for next year's championship.

The use of the Fiesta as the WRC racer comes on the heels of changes in rules limiting displacement to 1.6 liters. The changes are built around the core of the S2000 rules, which govern a junior series where the Fiesta RS met with success in the 2010 season, winning rallies at Monte Carlo and elsewhere.

"Ford's designers and product development engineers have worked closely and efficiently alongside the expertise of our partners at M-Sport.  The aim was, of course, to produce a car capable of challenging for world championship titles, but one which also reflects the much-admired 'kinetic design' styling cues synonymous with Ford's current road vehicles," said Ford of Europe motorsport chief Gerard Quinn.

The fat-fendered, all-wheel-drive, insanely high-output turbo Fiesta RS may look vaguely like Ford's road cars, but that's about all they have in common.

Though the new livery is out for all to see, specs for the new Fiesta WRC car remain under wraps. We'll have to wait for the the first week of February, just ahead of the season opening Rally Sweden, for the final details.