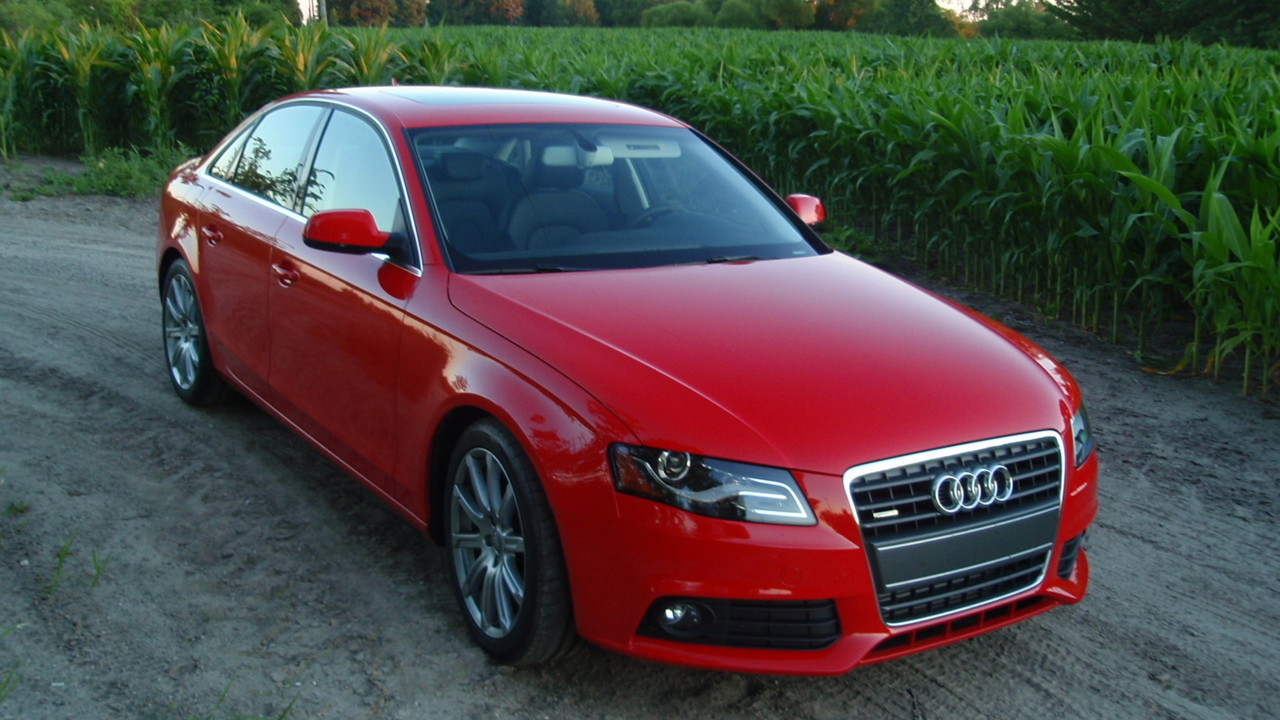 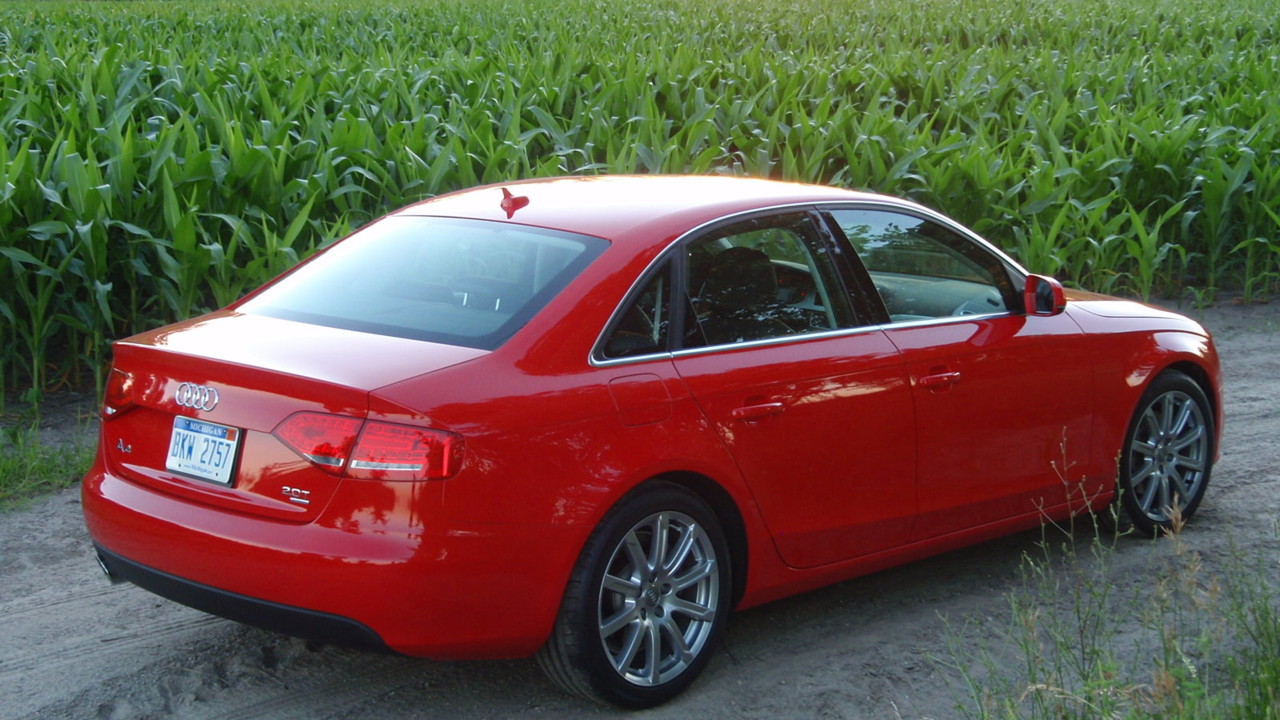 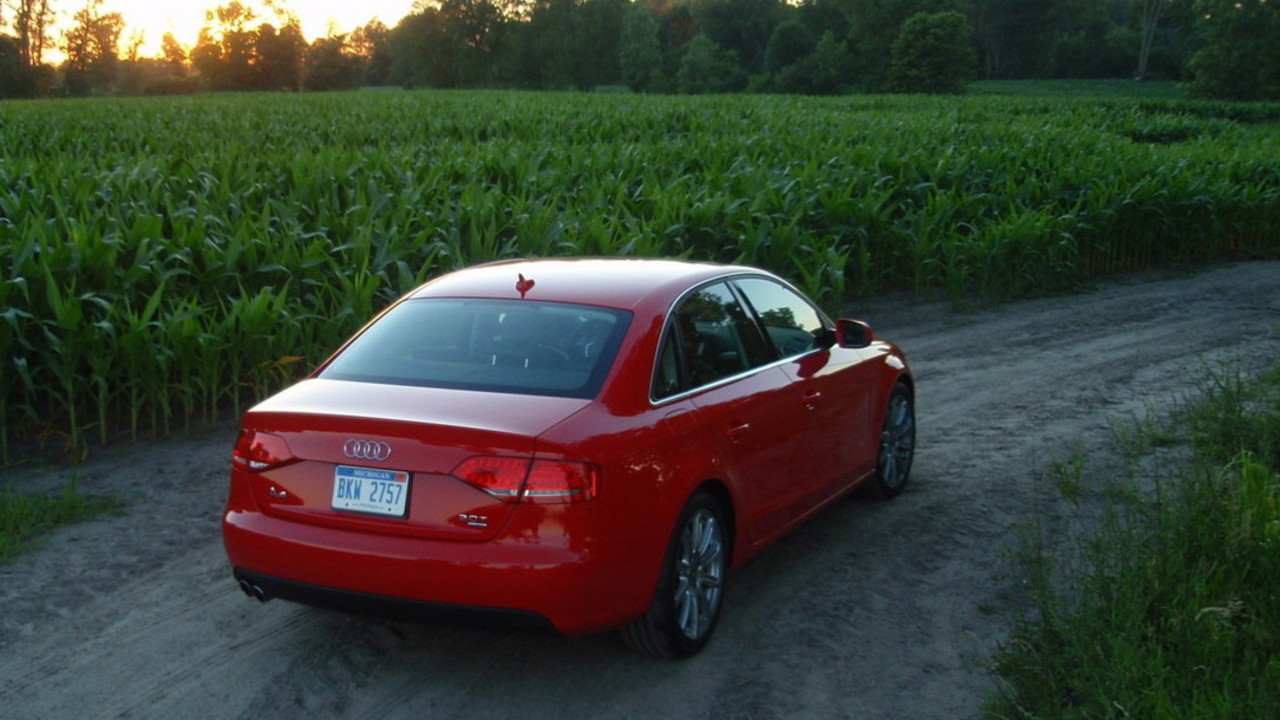 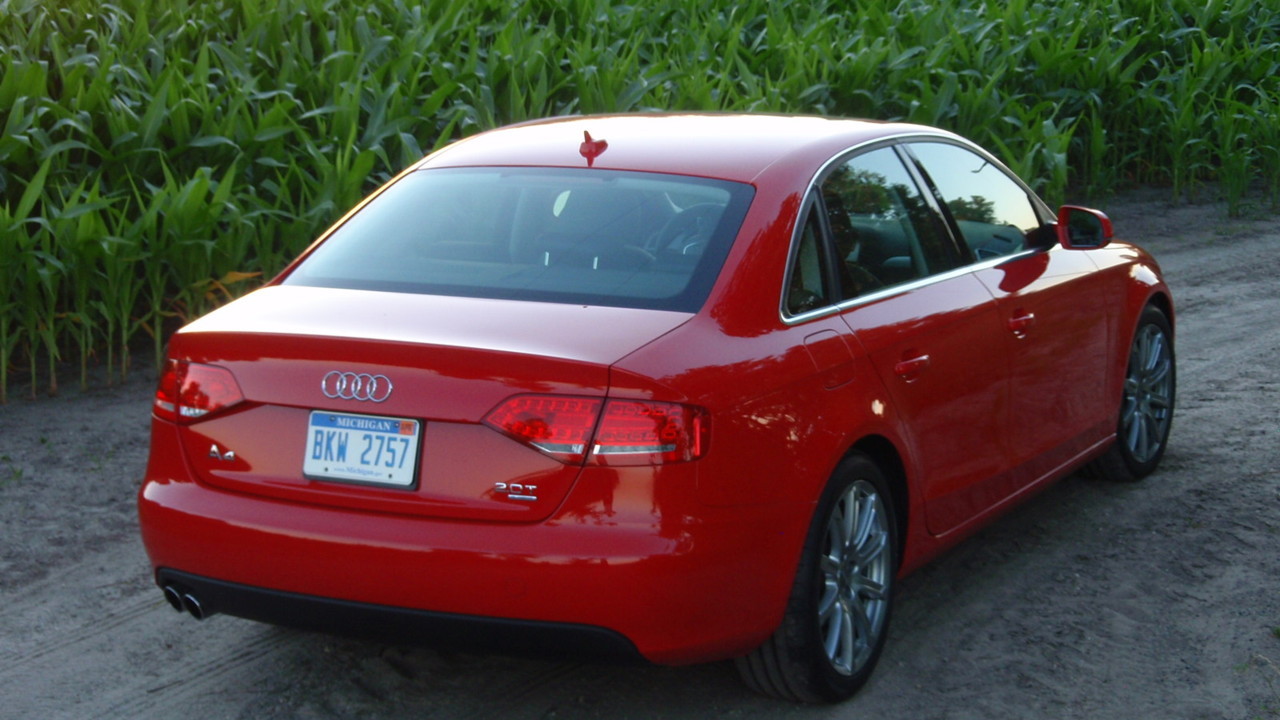 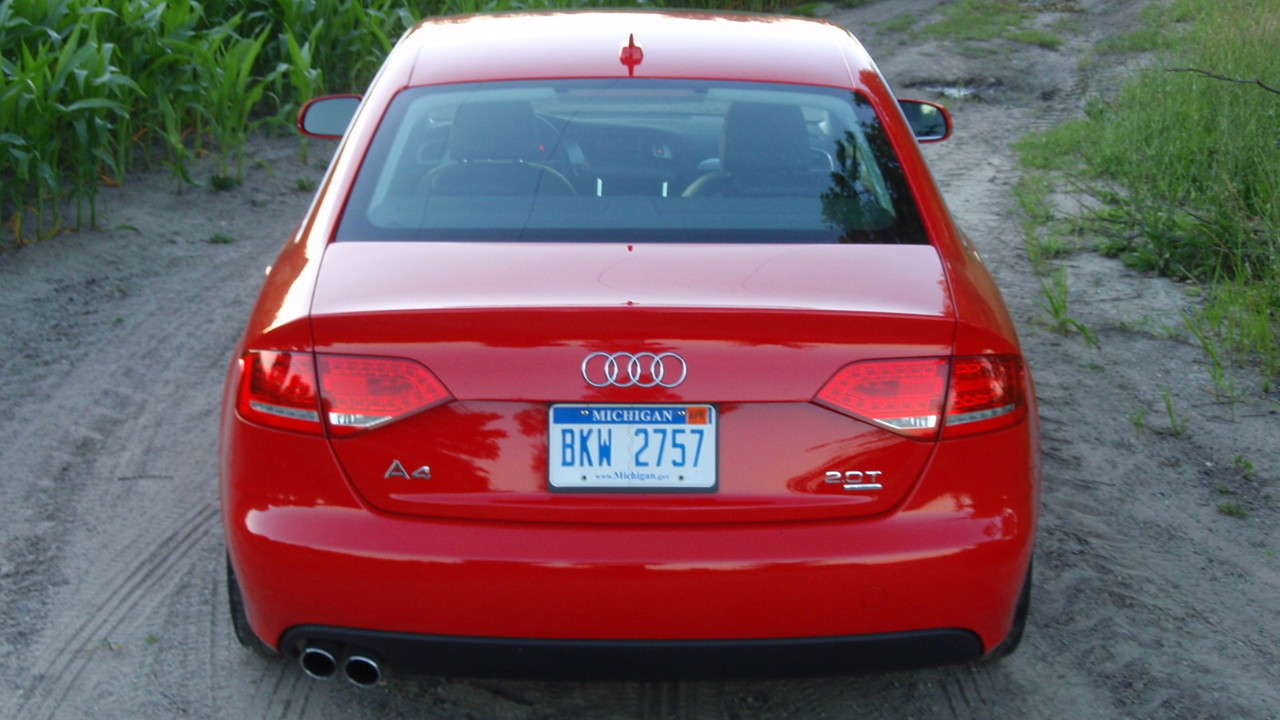 14
photos
If you've driven the A4 in the past, and crossed it off your list in favor of another compact sport sedan, you owe it another chance.

Last year, for 2009, Audi completely redesigned its much-loved sport sedan, giving it the most significant personality change since its original 1996 U.S. introduction. Up until then, serious enthusiasts tended to dismiss the A4 for being a little too cab-forward, always stylish but never quite as track-pedigreed as the BMW 3-Series. With the 2009 A4 it all changed; the new version is sleeker and sturdier-looking, with less front overhang but a longer hoodline, and the result is a sportier, more aggressive profile, with the cabin farther back.

The new A4 has a wheelbase that's more than six inches longer than the former model, which surely brings more passenger space—and particularly backseat space. But the difference isn't quite as pronounced as you might expect. Overall, seating is a little lower and a little less upright than what we remember; headroom could be a little tight in front for the tallest drivers (a sunroof comes on all models), and in back there's no surplus of legroom but just enough for two adults to be comfortable. The sport front seats included with the Sport package are excellent for this tall driver.

As well, the A4 accelerates, steers, and hunkers down at high speeds much more like a true sport sedan. The new base 2.0-liter engine, which was introduced last year is quite different than the 200-hp, 2.0T engine it replaces. With 211 horsepower and 258 pound-feet of max torque, it makes 11 more hp and 51 more lb-ft than before, and comes with variable exhaust lift and a host of changes.  It doesn't quite churn out the torque just above idle; the torque curve builds rather abruptly, so if you let out the clutch too soon and don't let the revs climb high enough at launch you can hit a flat spot that leaves you wanting—until you pass the 2,500-rpm mark and a rush of boost and torque comes on, all the way up to redline.

The six-speed manual gearbox that comes standard on the A4 shifts with more BMW-like precision and less of that loose, notchy vee-dub feeling than those in previous A4 models. Audi's handy electronic parking brake engages with a quick lift-on or release-down motion, and automatically releases as soon as you lift the clutch to its friction point. We thought that the taller ratios affect drivability a little bit, leaving us to downshift two or even three gears for passing, but they sure do help fuel economy. And when you wind out the gears with a good launch, it's as fast as BMW's 328i: The manual version can get to 60 mph in just 6.4 seconds (6.6 seconds with the automatic). Though we drove the A4 around mid-summer, it's worth noting that our model also had the quattro all-wheel-drive system, which sends more power to the back wheels now during most types of driving, helping to keep handling more balanced at the limit.

The one thing that left us wishing a bit was the way the engine sounded—way too coarse in our opinion for a vehicle in this size and price class. Provided you're in one of the higher gears and the revs were below 3,000 rpm, you don't hear the engine, but rev past the 4,000 rpm mark especially, and it gets boomy. There's also a surprising amount of vibration, as well as a tickling of the gas pedal at a resonant frequency around 70 mph.

Better at the pump than any of its rivals

But oh, is this sport sedan frugal. Audi claims improved fuel efficiency with this latest iteration of the turbo four, and they sure aren't exaggerating. During our week with the A4, we averaged an an almost incredible average figure (on premium): 31 mpg overall—admittedly mostly level highway driving, in Michigan, at responsible speeds, but with a fair amount of suburban stop-and-go and spirited back-road two-laner stints mixed in. That's better than any rival but the BMW 335d, which can only be had with rear-wheel drive.

The A4's steering system is one of the better systems in this class. The former A4 had steering that was often too light, but this feels firm and reassuring enough at higher cruising speeds yet imparts just a bit of road feel (yet a sense of weighting) in lower-speed corners). It's not quite on par with the all-wheel-drive G37x's awesome feedback near the limit, but it's close and in high-speed hauling it's more satisfying. One of our few nitpicks with the A4 was its brakes, which on our test vehicle felt a bit grabby and overboosted at low speeds; throughout a week with the vehicle we kept stopping several feet short of our intended spot.

Our test A4 was equipped with the Sport Package, which included 18-inch sport wheels, high-performance tires, and a sport suspension, which altogether made the ride quite firm. On a rough, frost-heaved Michigan road, the A4 was downright punishing, but this same calibration would be perfect for LA canyon highways.

Feature-wise the A4 is a decent value—especially in the form we tested, at $38,255 all said, with the Premium Plus Package, Sport Package, and available exhaust tips. It's about the same money as a well-optioned Infiniti G37x or Lexus IS 350, or a basic BMW 335i. The Premium Plus Package includes tri-zone climate control, Bluetooth, heated seats, a garage-door opener, trip computer, and rain/light sensors, among other features. We missed a USB port on the sound system, but turn it up with SD or CD inputs and the sound is rich and satisfying.

Cabin no longer trend-setting; sexy exterior makes up for it

The Audi A4's interior a few years back was a trend-setter in its class—and the new model still leads the pack when it comes to design—but the materials look and feel less remarkable in 2010, with some of the metallic plastic trim feeling like exactly what you'd find on some much less expensive vehicles. But build quality is still astounding—we couldn't get a single creak or rattle from the interior, despite a short stint on a gravel road.

We found its exterior more than makes up for the lack of wow on the inside. From a few paces back, the A4, like the A5 with which is shares its proportions and most of the mechanicals, has presence—serious, I-mean-business presence on the street. The sport-package wheels, exhaust tips, and Premium-package xenon headlamps and LED running lamps and tail lamps (along with the impressive detailing around the front air dam) altogether give this sedan quite the look.

In all, proportions, as well as performance and fuel-stingy practicality, that you'll likely be happy with for a long time.