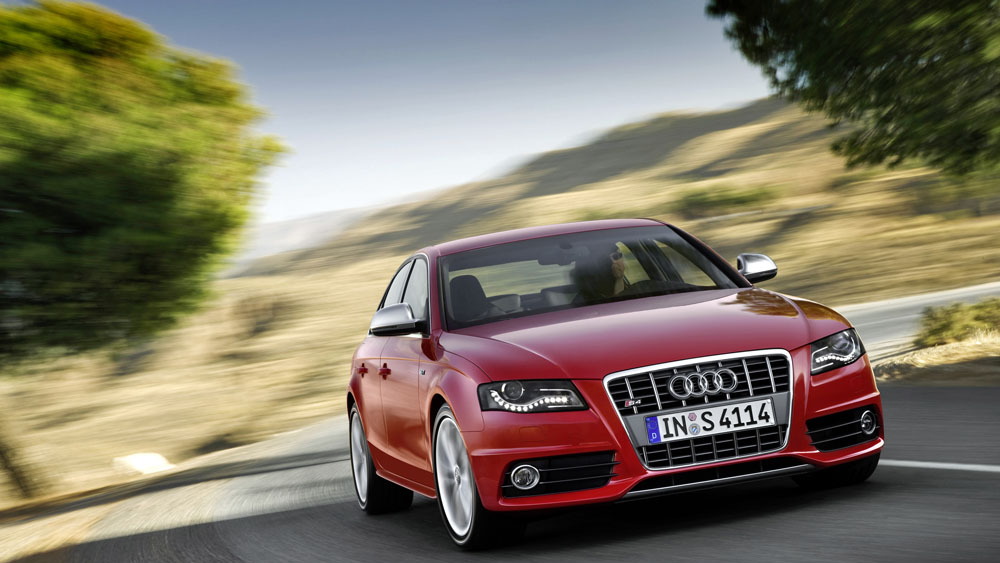 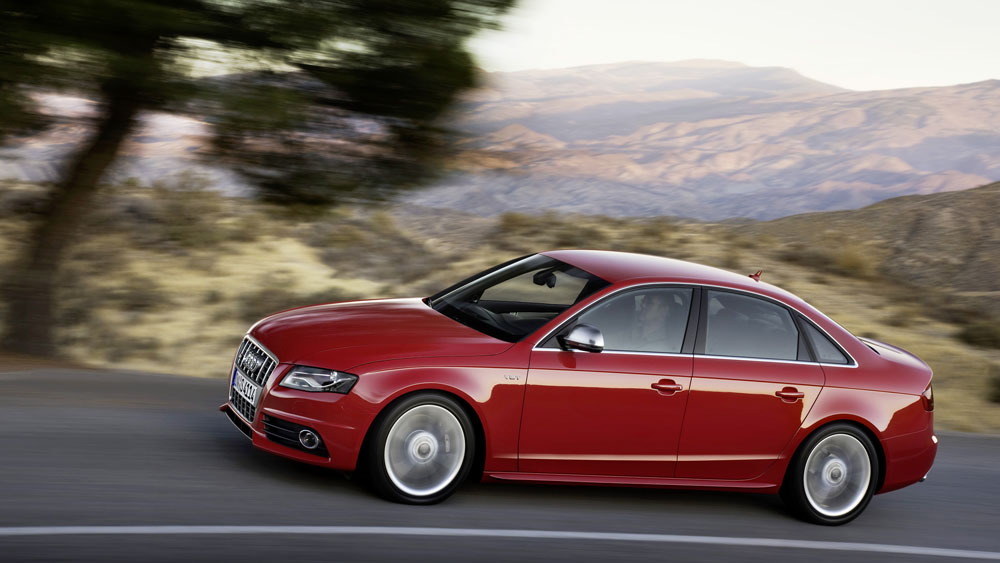 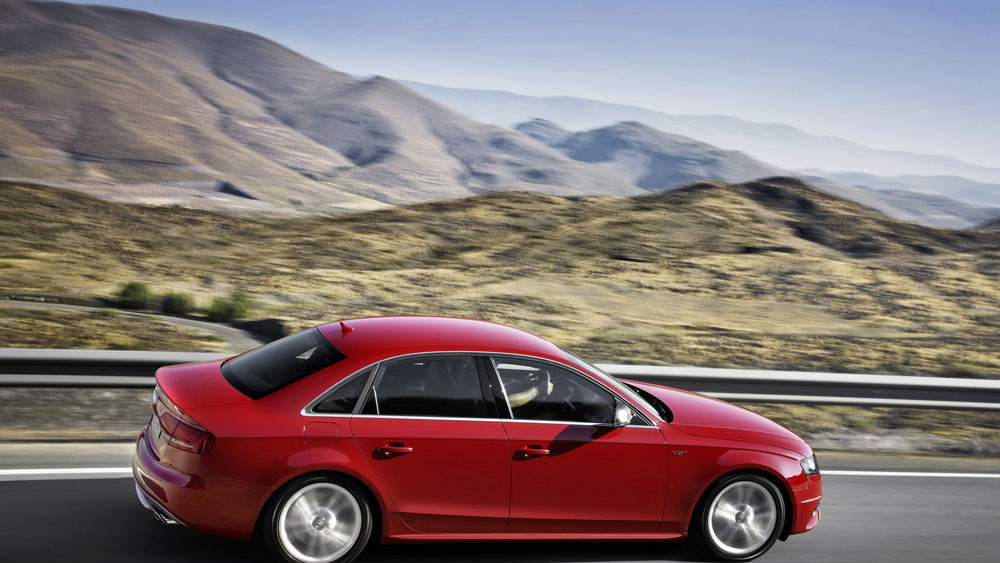 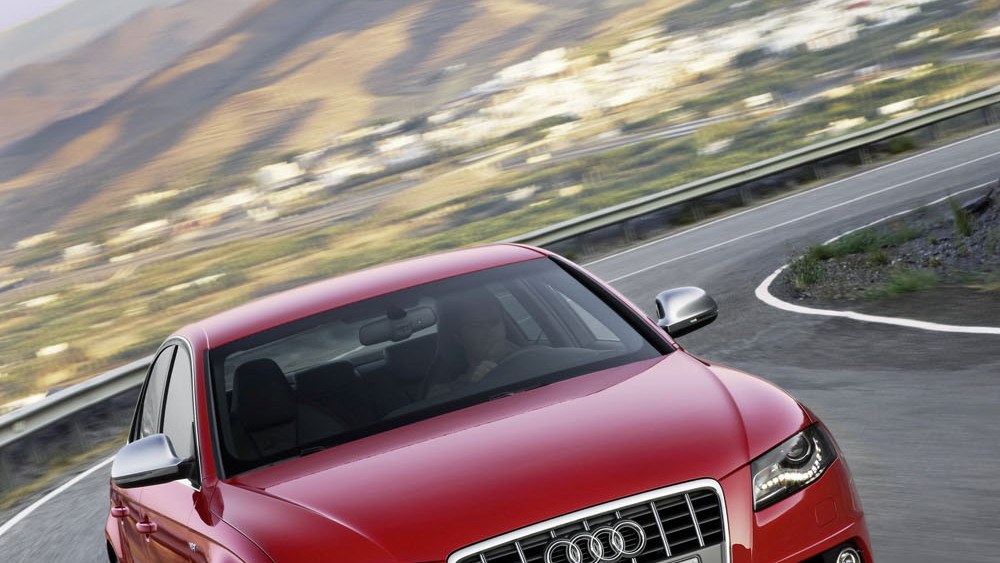 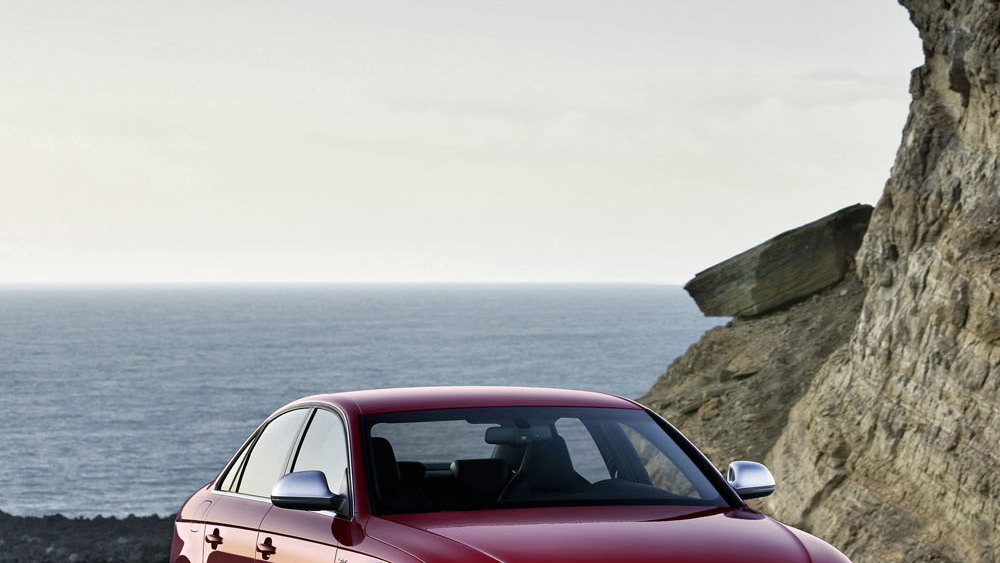 What? You don’t think first about fuel economy when shopping for a 333hp super sports sedan?

The kicker, by the way, is multifaceted.

The lengthened wheelbase (by six inches) of the new A4/S4 greatly benefits both handling and the cockpit arrangement. (More on handling, shortly.) While the cabin grows by every measure, some of these gains are quite fractional, but one gain, headroom, is substantial, and has the effect of making the A4/S4 far more airy and pleasing.

I’m not an especially large man by American standards but if you’ve ever been to Germany you know that, on average, Germans are very big people (and I don’t mean obese — I mean tall, long, lanky). Imagining even an average-sized German driving the old S4 was always a push for me. I understand at least slightly how the Mazda RX-8 could come to market with a decidedly tight cabin. The Japanese are no longer small folks, but on average they aren’t as huge as Americans or Europeans.

But German cars with cramped interiors always struck me as decidedly Lutheran — a Protestant reaction to excess that must only make sense where austerity is still, in some circles, seen as virtuous.

The newest Audis, however, at last feature generous fore/aft legroom, and while the A4/S4 duo take a small slice out of trunk space as a consequence the rear seats fold, 60/40, so you’ll still be allowed a generous 34 cubic feet of storage should you require carrying golf bags or other such bulk.

The outgoing S4 featured a 4.2-liter V-8. The new car gets a much smaller, three-liter supercharged V-6 with direct gasoline injection (an exceptionally high pressure spray of fuel is emitted into the combustion chamber for a far cleaner, more efficient burn). While the new car has a smaller motor, the seven-speed S-tronic transmission car out-sprints the 2008 to 60mph in 4.9 seconds, vs. 5.6 seconds for the old Tiptronic S4; 4.9 seconds for the new manual six-speed vs. 5.3 seconds for the prior manual.

One gain here is that although that V-8 had a bit more horsepower (340hp), the new car features more torque (325 lb. ft.) at 2,900rpm vs. 302 lb. ft. at a far higher rev of 3,500rpm. Amazingly, though the 2010 S4 has grown in all dimensions, it’s lost between 30-60 lbs. (depending on transmission), which also helps account for its quickness. And the fact that that stronger torque figure is available all the way up past 5,000rpm means you’ll need to change gears less often as well; there’s more power at lower revs, and this not only improves engine life (no reason to chase that 7,000rpm redline for propulsion), but improves the daily driving livability of the car, a fact your passengers and spouse will appreciate as well.

There’s no getting around it; while we tested the six-speed manual Audi, the S-tronic is a great transmission, one we’d readily take instead of the true manual. Yes, that’s a dubious statement to traditionalists, but Audi’s latest double-clutch gearboxes are superb and shift faster than any human being can. Plus, in daily driving you can treat them like automatic gearboxes, which is a huge benefit if you commute through traffic with any regularity.

No matter which gearbox you chose, the S4 must be ordered with the optional Sport Rear Differential (part of the $3,950 Audi drive select package) that overdrives the outside rear wheel in corners, fighting understeer. Torque biasing is also improved on the latest quattro cars like this one, with the default split 60/40 toward the rear wheels, so it’s rare to experience front-end torque steer.

Audi’s also done as good a job as BMW in creating a variable steering ratio system that’s relatively benign. That is, Audi’s dynamic steering mechanism, like BMW’s Active Steering, gives you tighter lock-to-lock during slow-speed maneuvers, like parallel parking, and a comparably less twitchy experience during highway cruising. Most drivers won’t even realize it’s there — which is sort of the idea.

And steering feel, though still lighter than you’ll get from BMW’s 3-series, is precise and mates nicely with the litheness of the suspension, which, with the aforementioned drive select package can be adjusted in a range from comfort to dynamic (this also changes throttle response and how much you’ll feel the aid of that Sport Rear Differential).

Best of all, this S4, unlike far less sophisticated boy toys, can play more than one note.

Take a highway exit ramp at 70mph (with the ESP off) and you can perch the S4 right on the pinhead apex of initiating drift, the suspension stiffening just as you desire it. Or just tool around for grocery errands and note how you don’t get beat to hell over every crack in the blacktop or feel the transmission balk at demands below 2,000 rpm. A world-class car should be a great date no matter the occasion and that’s what the S4 is.

Yes, I actually did find one other reason to want for the S-Tronic model, and it’s a ding. When Audi finally decided to enlarge the cabin of the A4/S4 they forgot to also enhance the range of the tilt/telescoping steering column. Now smaller drivers are penalized, especially those who want to reach the clutch without driving with bent tyrannosaurus arms. Adjustable pedals could be a fix, but better still would be a steering wheel that would dive closer to flush with the instrument panel, so your left foot can entirely depress the clutch but you can still drive with straightish arms.

Yeah, so we wanted the S-tronic anyway! You might, too, if you’re shorter than about 5’ 10”. But even if with bent arms, we'd take the S4 without reservations.