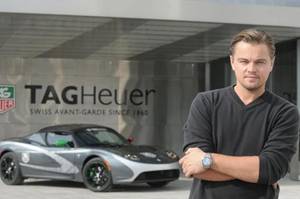 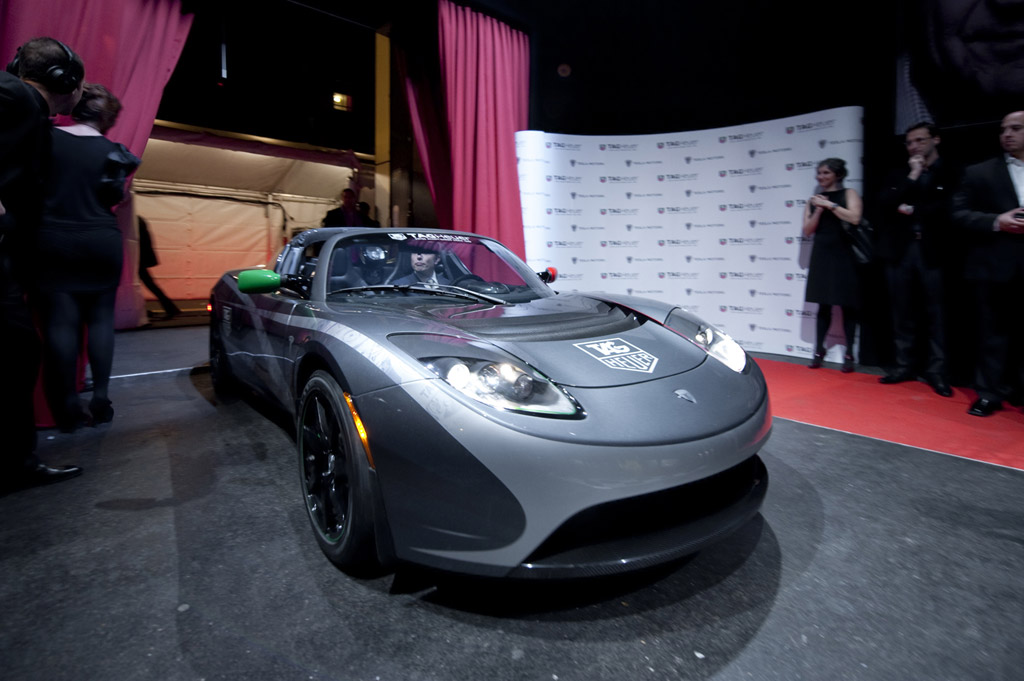 It would be really easy to make fun of Leonardo DiCaprio. Heck, if nothing else, the guy was in Titanic, which, according to our extensive research, is the sole reason for the continued popularity of Riverdance. In most countries, that would be worth a death sentence or two, or at least a good tar-and-feathering.

But as often as we write off celebs for their superficial interest in green cars or muscle cars or saving the chinchillas or whatever this week's cool cause may be, we can't dismiss Leo so easily. He's been a vocal supporter of eco-friendly technology and sustainability practices for years, and he doesn't seem to be slowing down. Now, the guy is kicking off a round-the-world road trip called the Odyssey of Pioneers (sounds grand, don't it?) -- and he's doing it alongside a special-edition Tesla Roadster designed by luxury watchmaker TAG Heuer.

The all-electric badassery starts tomorrow, as 20 Tesla owners drive from Basel, Switzerland to Zurich. From there, the 2010 TAG Heuer Tesla Roadster will travel on to Monaco, Milan, Budapest, Warsaw, Moscow, Delhi, Beijing, Shanghai, Tokyo, Los Angeles, Miami, New York, London, and finally, Paris. In all, the trip will take about eight months -- presumably because the battery-electric Tesla Roadster has a range of 200 miles per charge, and a re-up takes around eight hours. Kinda puts a kink in the travel schedule.

We're taking some solace in the fact that Leo won't actually be making the trip himself: that fun will be left to a special team of drivers and sidekicks, including first driver Luke McClure and cameraman Vivien Floris. So basically, Leo flew to Basel just to unveil the special-edition Roadster, and, presumably, to receive a really nifty watch. Given the carbon emissions involved in jetting from the U.S. to Europe, that doesn't sound so eco-friendly after all. So maybe we can make fun of him.

While we ponder our way out of that conundrum, here's a video clip of the Roadster's unveiling (sans Leo, we might add), along with the official Tesla press release. Because you guys don't have anything else to do on a Friday, right?

Leonardo DiCaprio, a TAG Heuer spokesman and an early owner of the Tesla Roadster, kicked off the 24,000-mile/37,000-kilometer trip on March 18 in Basel, Switzerland from the TAG Heuer 150th anniversary party. The eight-month tour will include displays, owner appreciation gatherings, and VIP events in 15 cities and 150 towns on three continents. The tour will conclude with at a final event in Paris.

The Odyssey centers around the 2010 TAG Heuer Tesla Roadster – a rugged, one-of-a-kind collector's Roadster incorporating TAG Heuer avant-garde design elements, a unique interior with a prototype watch and other timepieces. About 20 Tesla Roadster owners will travel from Basel to Zurich, the first stop on the journey on Saturday afternoon.

The TAG Heuer Tesla Roadster will recharge using existing infrastructure worldwide. All Tesla Roadsters can be refueled from conventional electrical outlets, enabling owners to recharge from their garages, at hotels charging stations, parking lots or nearly anyplace with electricity. The Roadster’s charger is on board the car, so owners simply plug the car into an outlet. Similar to a mobile phone or hair dryer, no special equipment required.

“Tesla and Tag Heuer believe that we should use technology to improve our lives and tread more lightly on this planet,”  said Tesla CEO Elon Musk. “We are undertaking this global journey using existing infrastructure, proving that the world is ready for electric cars.”

The Tesla partnership is the first time TAG Heuer has teamed with an electric car company. TAG Heuer, a star brand from the luxury group and worldwide leader Louis Vuitton Moet Hennessy (LVMH), has deep roots in the automotive sector. In 1911 founder Edouard Heuer received the patent for The Time of Trip, the first car dashboard chronograph, followed in 1933 by the Autavia -- the first dashboard timekeeper for both automobiles and aviation. TAG Heuer has a rich history and expertise with the world's most prestigious racing teams.

"We believe that high-performance drivers are increasingly searching for products that are efficient, socially responsible and stylish,” said Jean-Christophe Babin, President and CEO of TAG Heuer. “TAG Heuer and Tesla are two of the few companies already achieving these ideals today.”

To chart the Odyssey in real time, meet the drivers, attend events, and find out what happens at the end of this epic journey, visit http://odyssey.tagheuer.com.