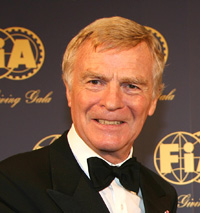 
In a joint statement distributed by the carmakers on Thursday, they slammed the revelations in the British tabloid media at the weekend as "disgraceful", even though Mosley has denied that his escapades with prostitutes did not have a Nazi element as reported.

"As a company, we strongly distance ourselves from it. This incident concerns Max Mosley both personally and as president of the FIA, the global umbrella organisation for motoring clubs.

"Its consequences therefore extend far beyond the motor sport industry. We await a response from the relevant FIA bodies," the statement read.

The news from Germany coincides with revelations that the Crown Prince of Bahrain barred Mosley from attending the grand prix this weekend.

London newspaper The Times said Sheikh Salman Bin Hamad Al-Khalifa told the 67-year-old Briton in writing that he is not welcome in the kingdom at present.

"With great regret, I feel that under the current circumstances, it would be inappropriate for you to be in Bahrain at this time," the letter read.

Mosley had been due to travel to Bahrain for the F1 event and to attend a dinner hosted by the Crown Prince.

Max Mosley on Thursday responded with disappointment to news that carmakers involved in formula one had denounced his involvement in the sex scandal.

Mosley, who in a letter to FIA affiliates this week did not deny his escapades with five prostitutes, responded: "Given the history of BMW and Mercedes-Benz, particularly before and during the Second World War, I fully understand why they would wish to strongly distance themselves from what they rightly describe as the disgraceful content of these publications," he said, no doubt referring to the Nazi elements of News of the World's reportage.

"Unfortunately, they did not contact me before putting out their statement to ask whether the content was in fact true," the 67-year-old added.

But Mosley's support base subsequently only dwindled further, when F1's Japanese contingent - manufacturers Honda and Toyota - also slammed his conduct.

"When all the facts are known, it will be for the FIA to decide whether Mr Mosley has met the moral obligations which come with the position of FIA president."

Honda reacted similarly, expressing concern that F1 and its stakeholders' reputations are "being damaged".

"We request that the FIA gives this matter careful consideration and reaches an immediate decision in the best interests of F1 and motorsport," it added. (Source: GMM)