It's now been two years since Tesla revealed the Cybertruck, and during that time other automakers have launched electric pickup trucks with features the Tesla lacks, meaning for once Tesla is the one in catch-up mode.

The information was announced last week by Tesla CEO Elon Musk, who in his usual style, took to Twitter to reply to a post about the Cybertruck no longer being listed as an available model on Tesla's website.

Initial production will be 4 motor variant, with independent, ultra fast response torque control of each wheel

The new R1T pickup from electric-vehicle startup Rivian offers four electric motors, while GMC's Hummer EV only offers up to three motors but features all-wheel steering. The steering system is what makes the Hummer's diagonally moving function, known as the Crab Mode, possible, and Musk in a subsequent Twitter post said the Cybertruck will offer similar functionality.

Rivian is developing its own Tank Turn feature for the R1T that, under the right conditions, will be able to turn the vehicle on the spot—a full 360 degrees—by spinning the left and right wheels in opposite directions. No other company has announced plans for something similar yet, though.

At the Cybertruck's reveal, Musk said the pickup would offer battery options for over 250 miles, over 300 miles, and over 500 miles, with prices starting at $39,900, $49,900 and $69,900, respectively. The base model was to have a single rear motor, while the mid-range model was to have dual-motor all-wheel drive. The previous range-topper was to have a tri-motor setup. It isn't clear how Tesla will rearrange the lineup now that a quad-motor setup is planned. 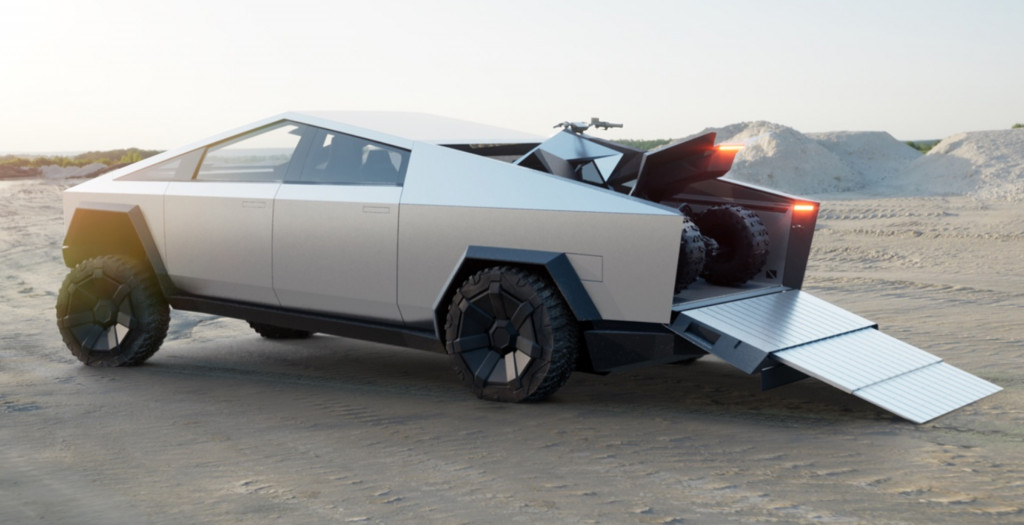 Cybertruck production was originally due to start at a new plant in Texas in late 2021, though Tesla in July said production would only start after Model Y production is up and running at the Texas plant.

Tesla confirmed in September that Cybertruck production has been delayed to late 2022. The company also said at that time that production of the redesigned Roadster would be pushed back to 2023.

More details on the company's product pipeline are due during an earnings call in January.