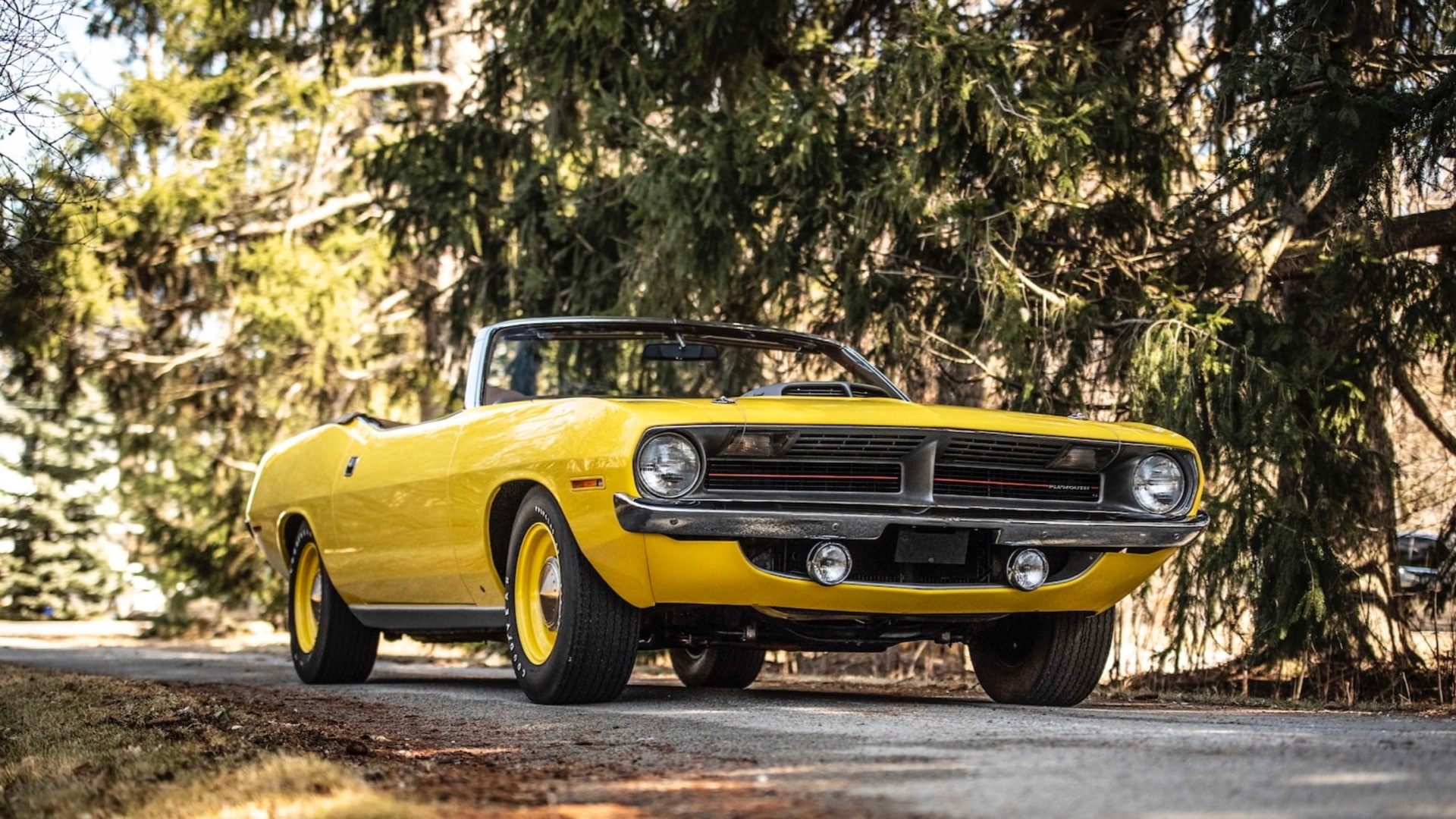 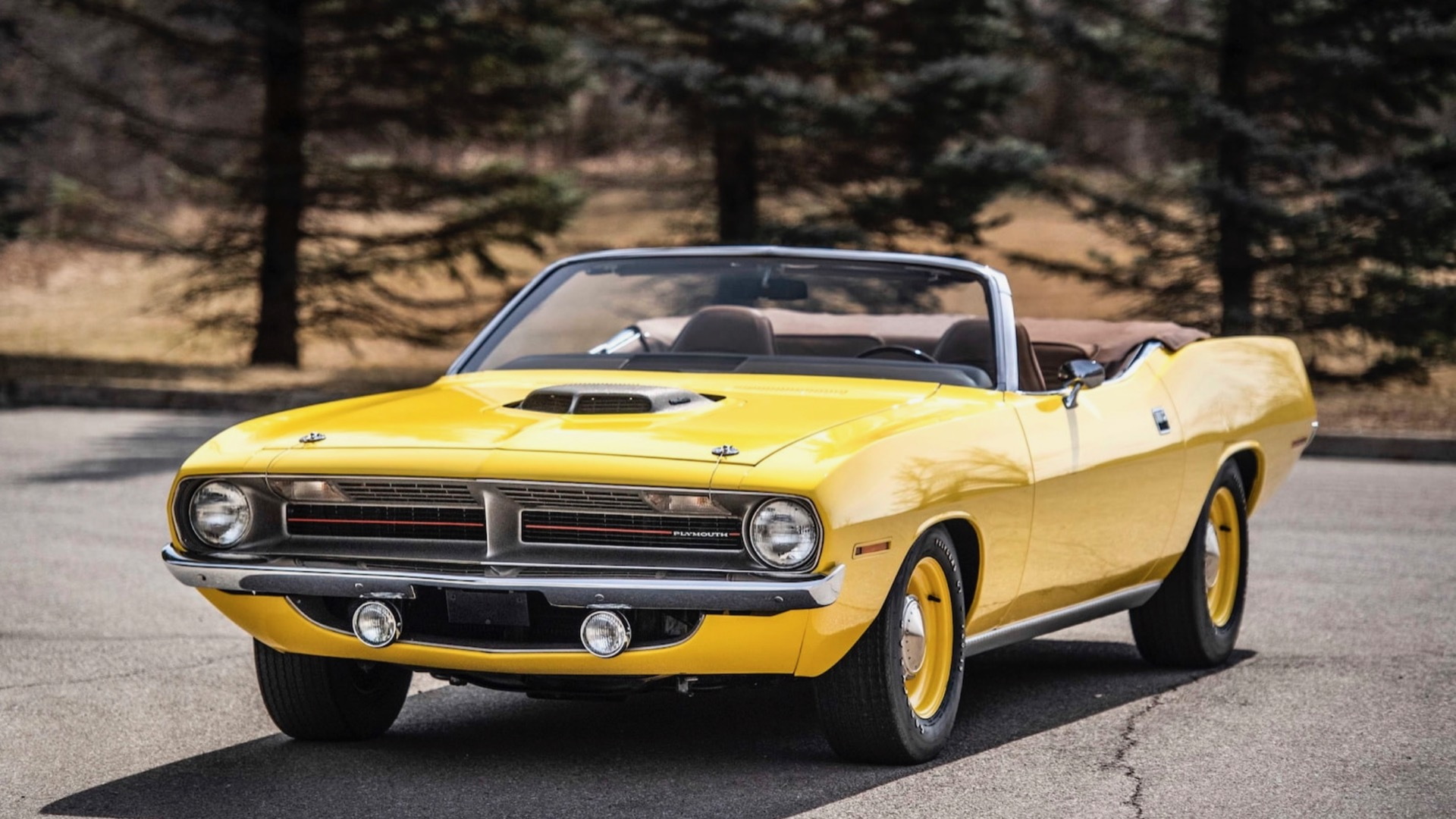 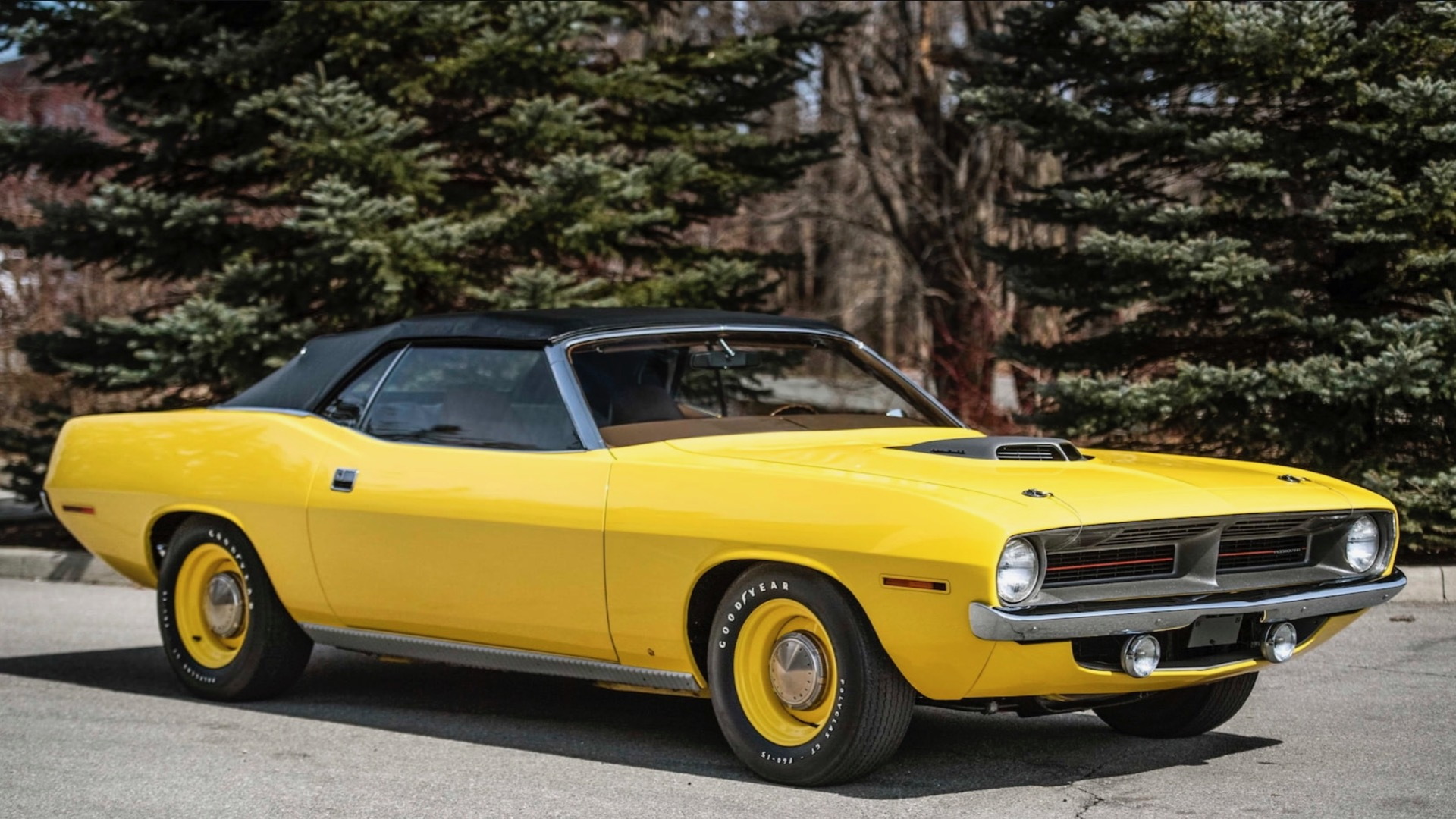 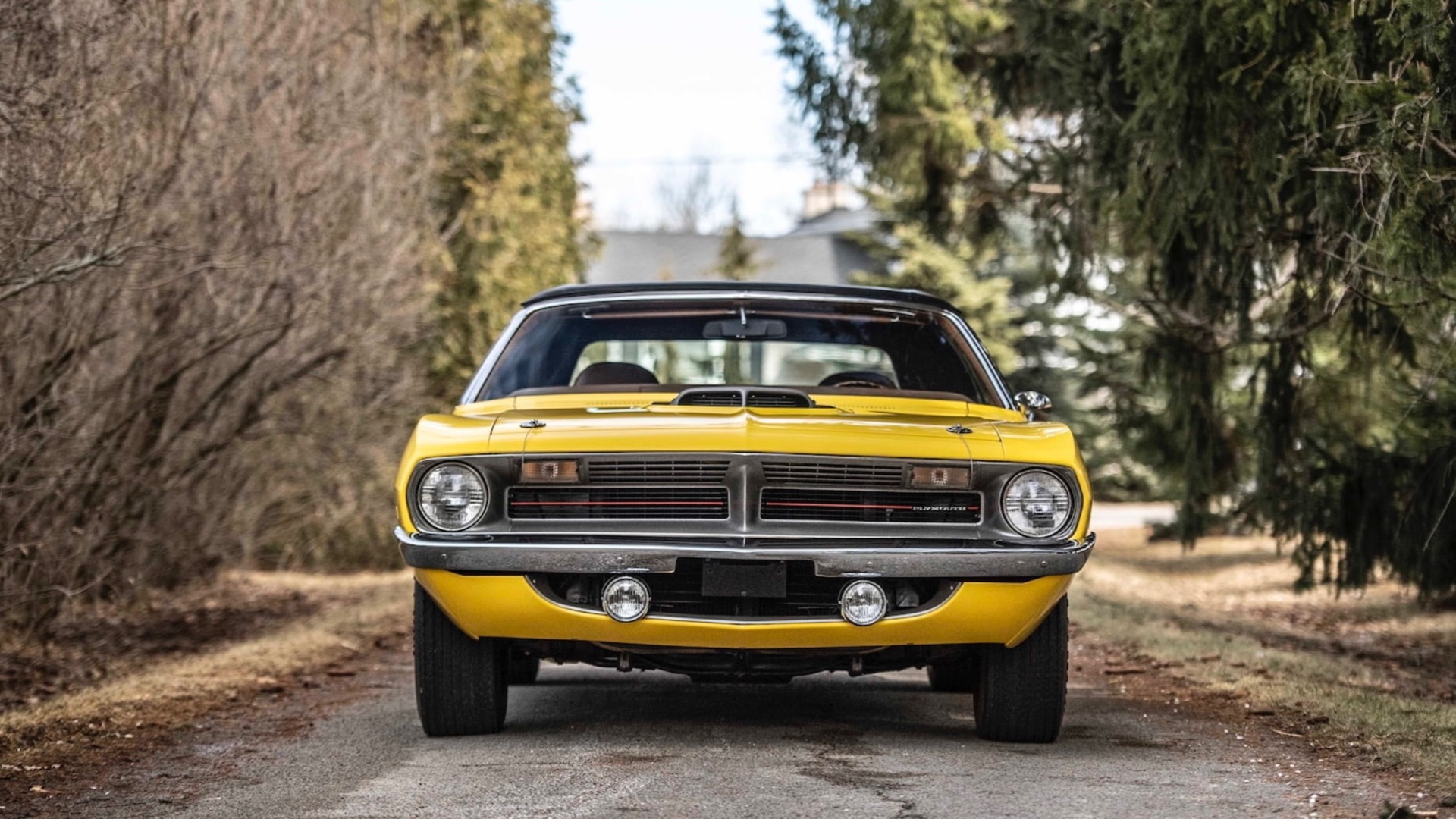 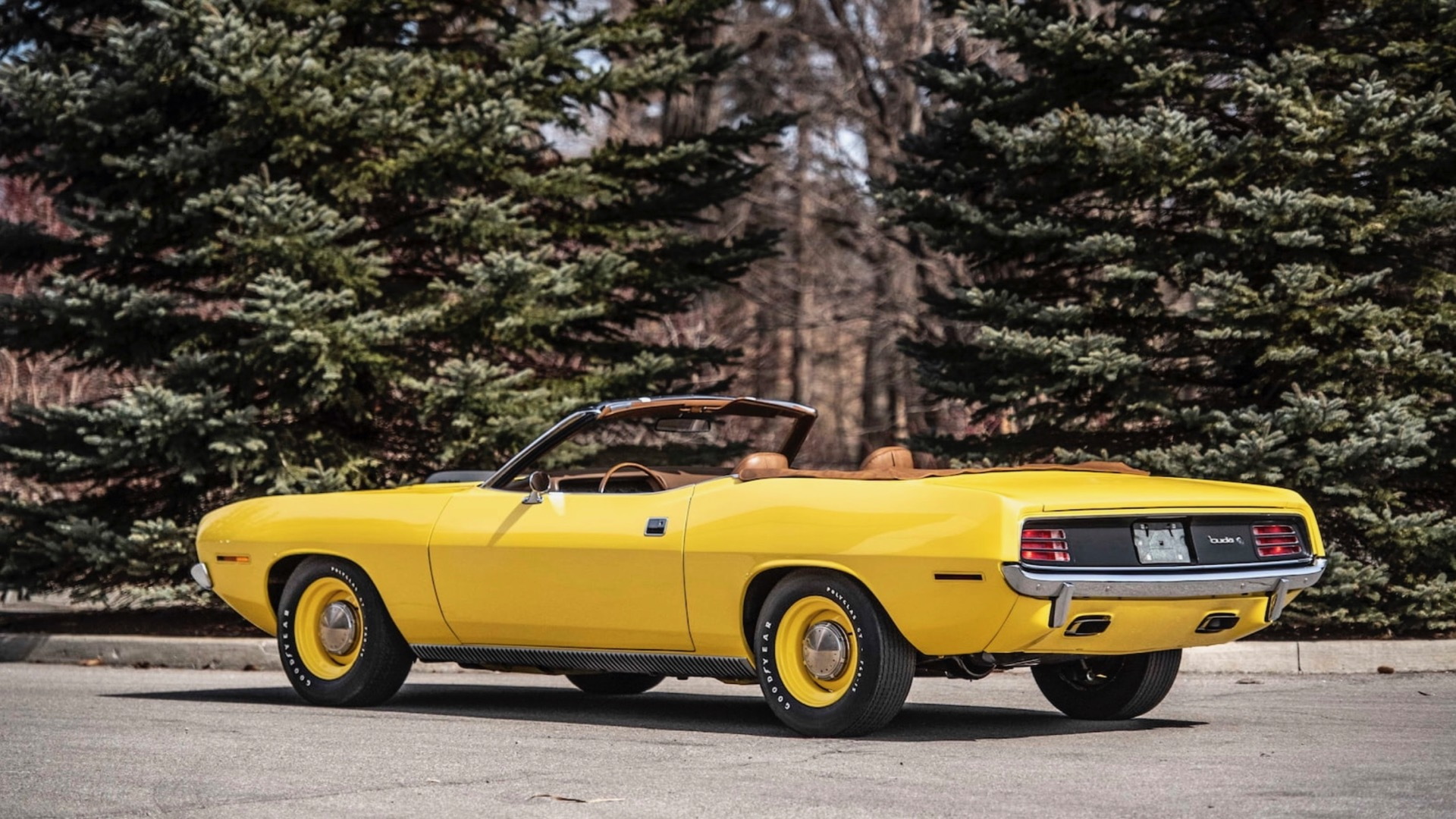 An extremely rare 1970 Plymouth Hemi 'Cuda Convertible is among the featured lots at Mecum's auction scheduled for January 6-16 in Kissimmee, Florida. Mecum doesn't publish pre-auction estimates, but you can expect this topless muscle car to go for serious money.

The Plymouth Barracuda (performance versions got 'Cuda nomenclature beginning in 1970) was the brand's competitor to the Ford Mustang, and shared the E-Body platform with the Dodge Challenger. That means plenty of affordable entry-level models were produced, but this isn't one of them.

According to the listing, this car is one of 14 1970 'Cuda Convertibles with the legendary Hemi V-8 engine, one of nine with an automatic transmission, and one of just three built for Canadian export. Of those three, one is believed to have been destroyed, while this car and another left the factory in the retina-assaulting High Impact FY1 Lemon Twist paint you see here.

The 426-cubic-inch Hemi features dual four-barrel carburetors and sits beneath the iconic Shaker hood scoop, so named because it moves when the engine is revved. The convertible also left the factory with 15-inch steel wheels painted the same Lemon Twist hue as the body, and with a Saddle Tan interior. This is the only Hemi 'Cuda Convertible with that combination of interior and exterior colors, according to the listing.

The car was treated to a rotisserie restoration by Legendary Motorcar of Halton Hills, Ontario, Canada. The entire body was stripped down to bare metal, while all chrome parts were repainted. Assembly line markings and tags were retained for authenticity's sake, per the listing.

Hemi 'Cudas generally sell for millions of dollars at auction. A pair of Hemi 'Cuda Convertibles fetched more than $2 million each at a 2016 Mecum auction. Another sold for $3.5 million in 2014. Expect similar money for this beauty.