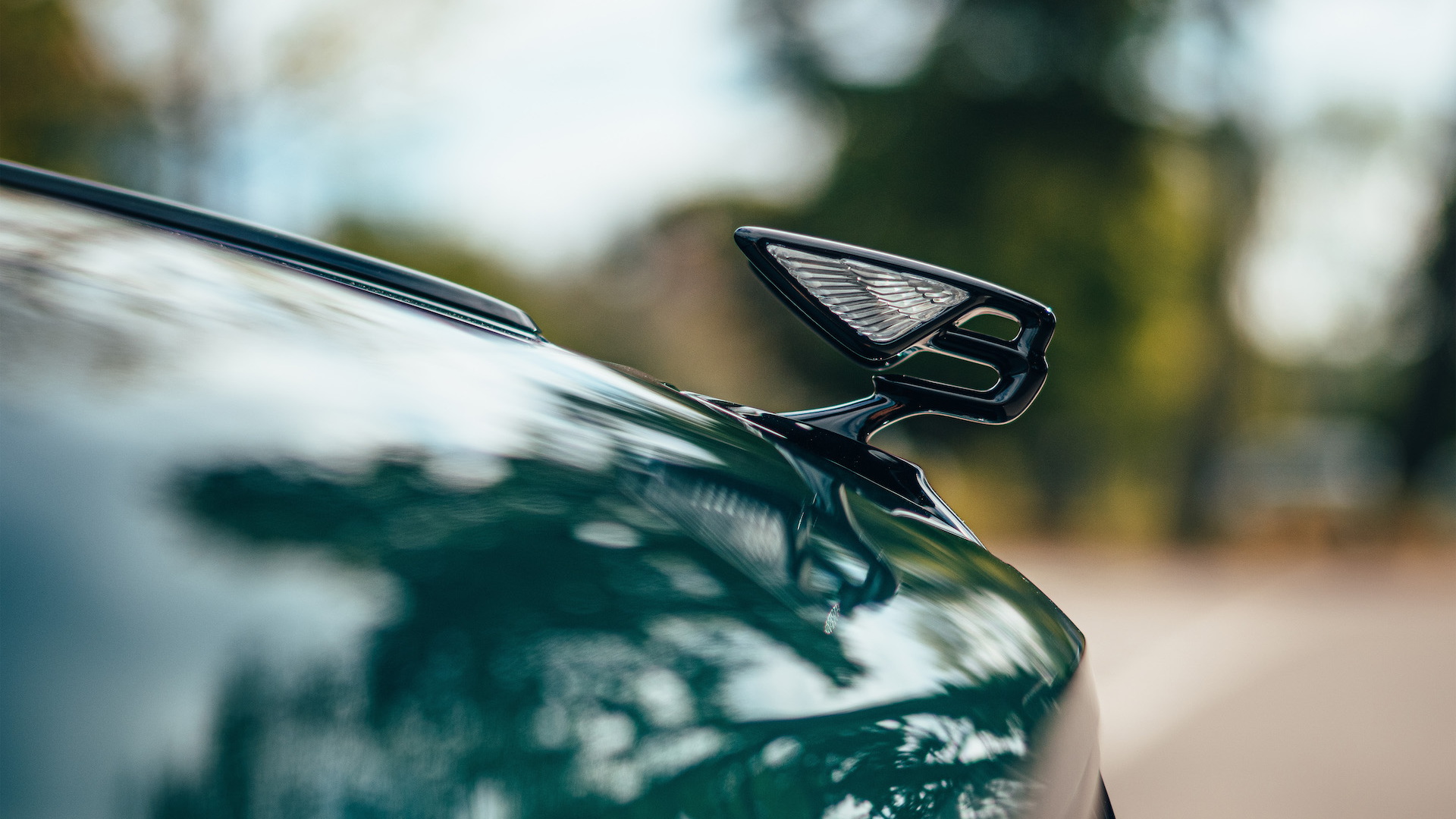 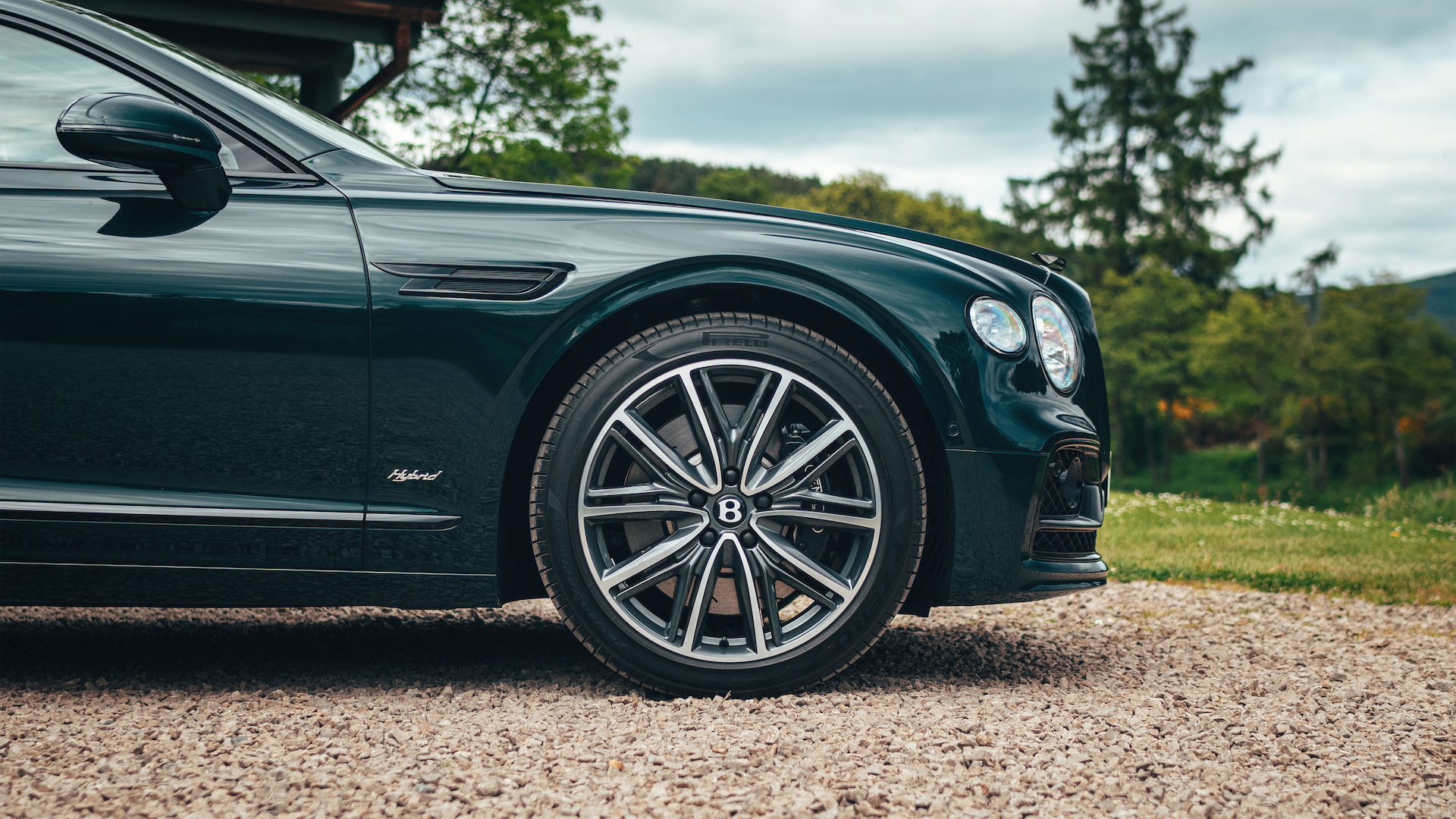 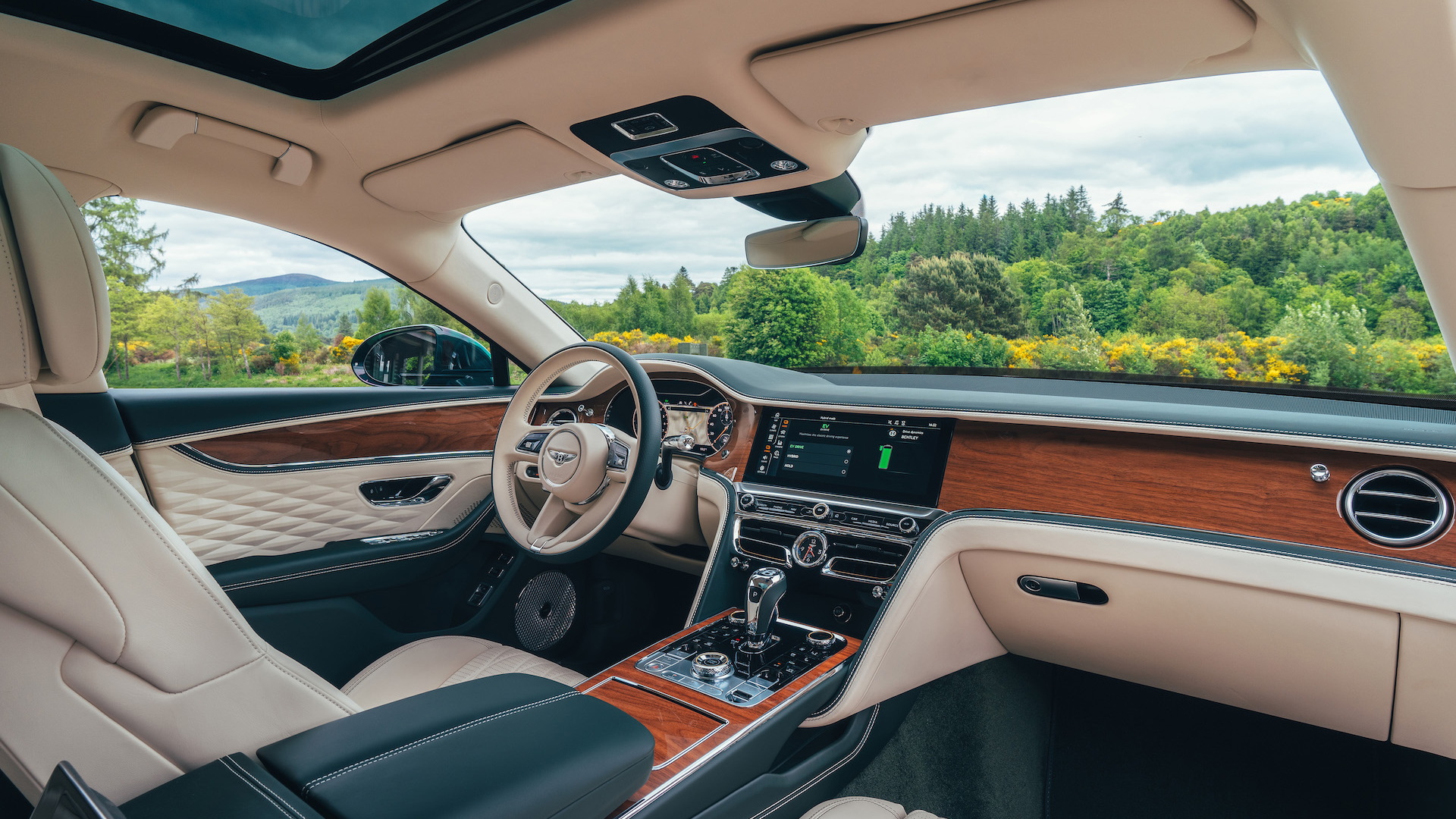 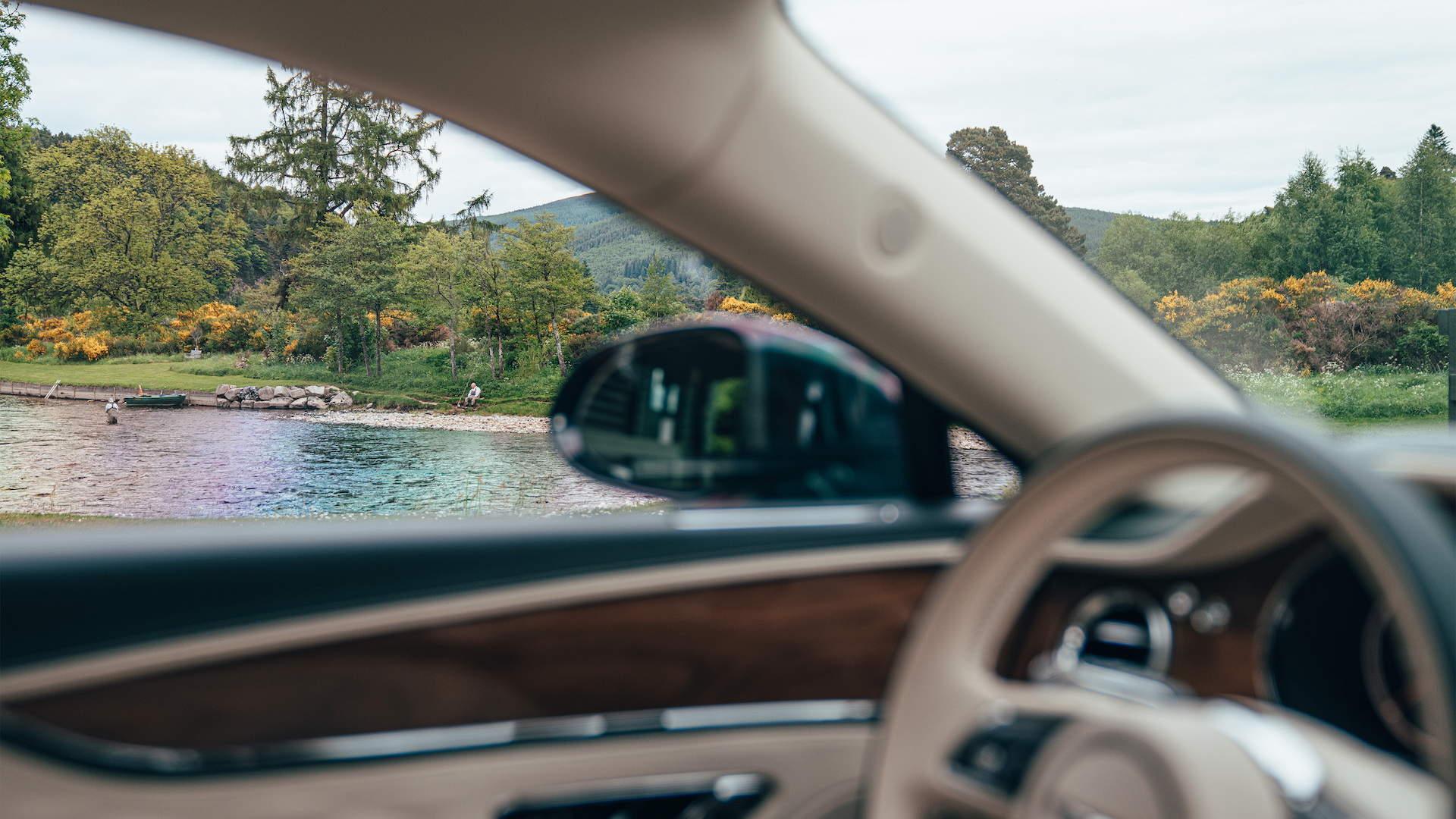 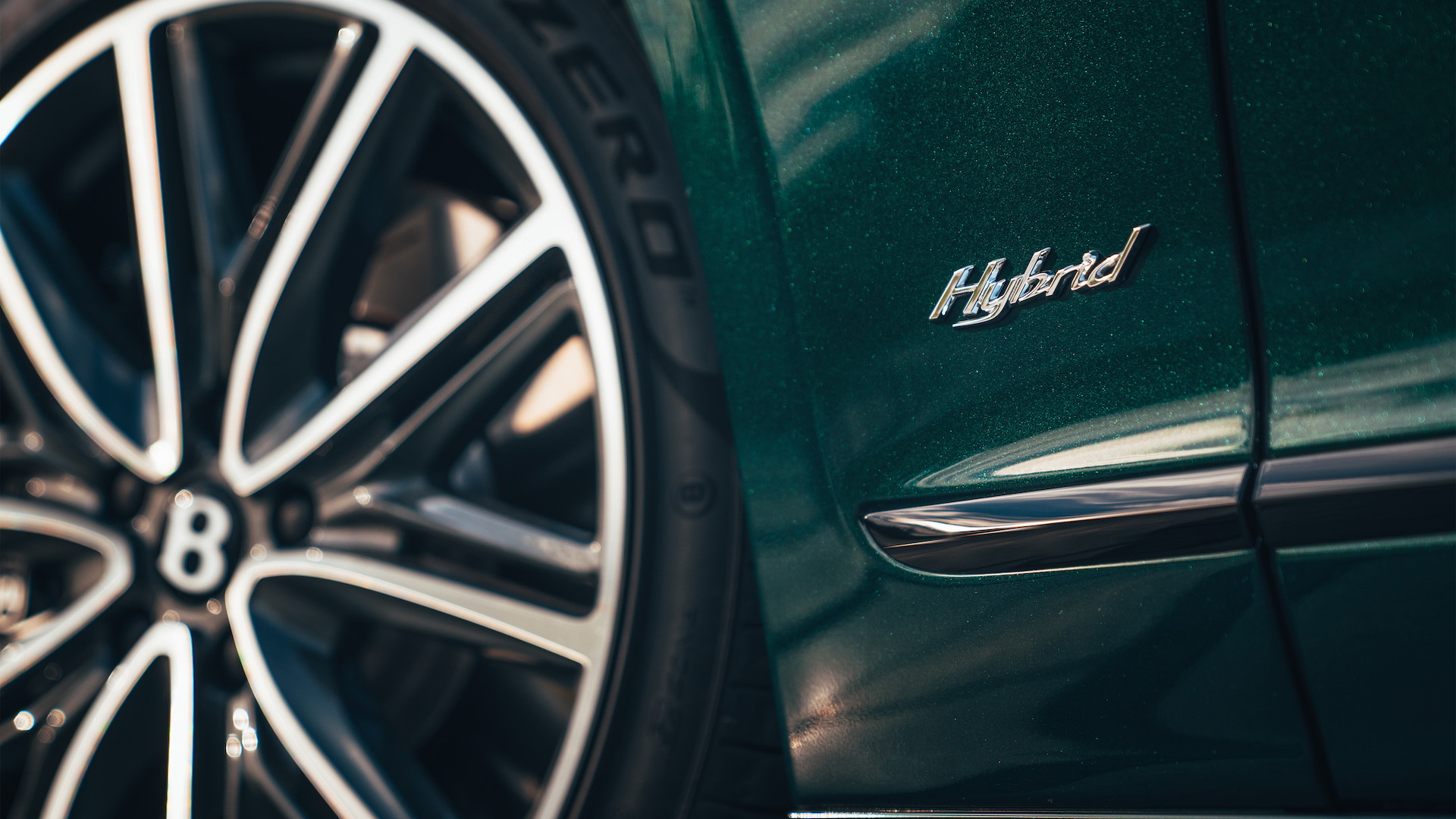 Bentley is on a path toward selling only battery-electric vehicles by 2030. In the meantime, the company is taking steps toward that future, first with the Bentayga Hybrid and now the Flying Spur Hybrid, which is due to hit the market by the end of the year.

Bentley revealed the Flying Spur Hybrid on Tuesday. A plug-in hybrid, the luxury sedan will have about 25 miles of all-electric range according to the European WLTP cycle, which tends to be more generous than the U.S.'s EPA cycle. It will be powered by a twin-turbocharged 2.9-liter V-6 that makes 404 hp teamed with a 132-hp electric motor positioned between the engine and transmission for a total of 536 hp and 553 lb-ft of torque. That's about the same output as Bentley's twin-turbocharged V-8, and it will launch the car from 0-60 mph in just 4.1 seconds and push the car to a top speed of 177 mph.

Bentley says the permanent synchronous magnet motor's immediate torque covers any turbo lag, and the powertrain meets the company's performance and refinement expectations. A 14.1-kwh lithium-ion battery powers the motor, and can be fully charged in two and a half hours on a Level 2 charger. Buyers can get a Bentley-branded charging station at no charge.

It's essentially the same plug-in hybrid system used in the Bentayga Hybrid, but that vehicle uses a less-powerful single-turbo 3.0-liter V-6.

With the lithium-ion battery in back and a lighter engine up front, Bentley engineers made small changes to the tuning of the three-chamber air suspension to maintain the Flying Spur's comfortable yet sporty ride and handling.

On the outside, the Flying Spur Hybrid gets a "Hybrid" front fender badge, quad oval tailpipes, and a charging point on the left rear fender.

Inside, drivers can choose three hybrid-specific driving modes: EV Drive, Hybrid, and Hold. EV Drive, the default mode when the car is started, goes for maximum electric driving and is best used for short trips. Hybrid uses the motor and engine to deliver the best efficiency. When a destination is input into the navigation system, this mode will choose the driving style best for the situation, using engine coasting when appropriate, storing energy for use in cities, and and aiming to drain the battery when it reaches the destination. Hold mode maintains the battery charge for use when needed. Hold is automatically chosen when the Sport mode is used.

The Flying Spur Hybrid also adds some information displays on the head-up display, infotainment screen, and instrument cluster with hybrid information. The instrument panel shows when the car is using the gas engine, operating as an EV, and regenerating energy during deceleration.The infotainment screen shows the flow of energy, efficiency statistics, and charging timers. Range, battery level, and charging information can be seen in the head-up display, gauges, and center screen.

In addition, battery charge and trip stats can be viewed through the My Bentley app, which also allows owners to pre-condition the interior.

A Bentley spokesperson estimated about 30-40% of Flying Spur buyers in the U.S. will choose the Hybrid. A company rep also said Bentley intends to offer a hybrid Continental GT by 2025.

In addition to the Flying Spur Hybrid, Bentley announced a collaboration with the Scotch whisky brand The Macallan on Tuesday. The companies will collaborate to share practices to work toward carbon neutrality and sustainability. The partnership will also spawn some The Macallan special-edition Bentley models.