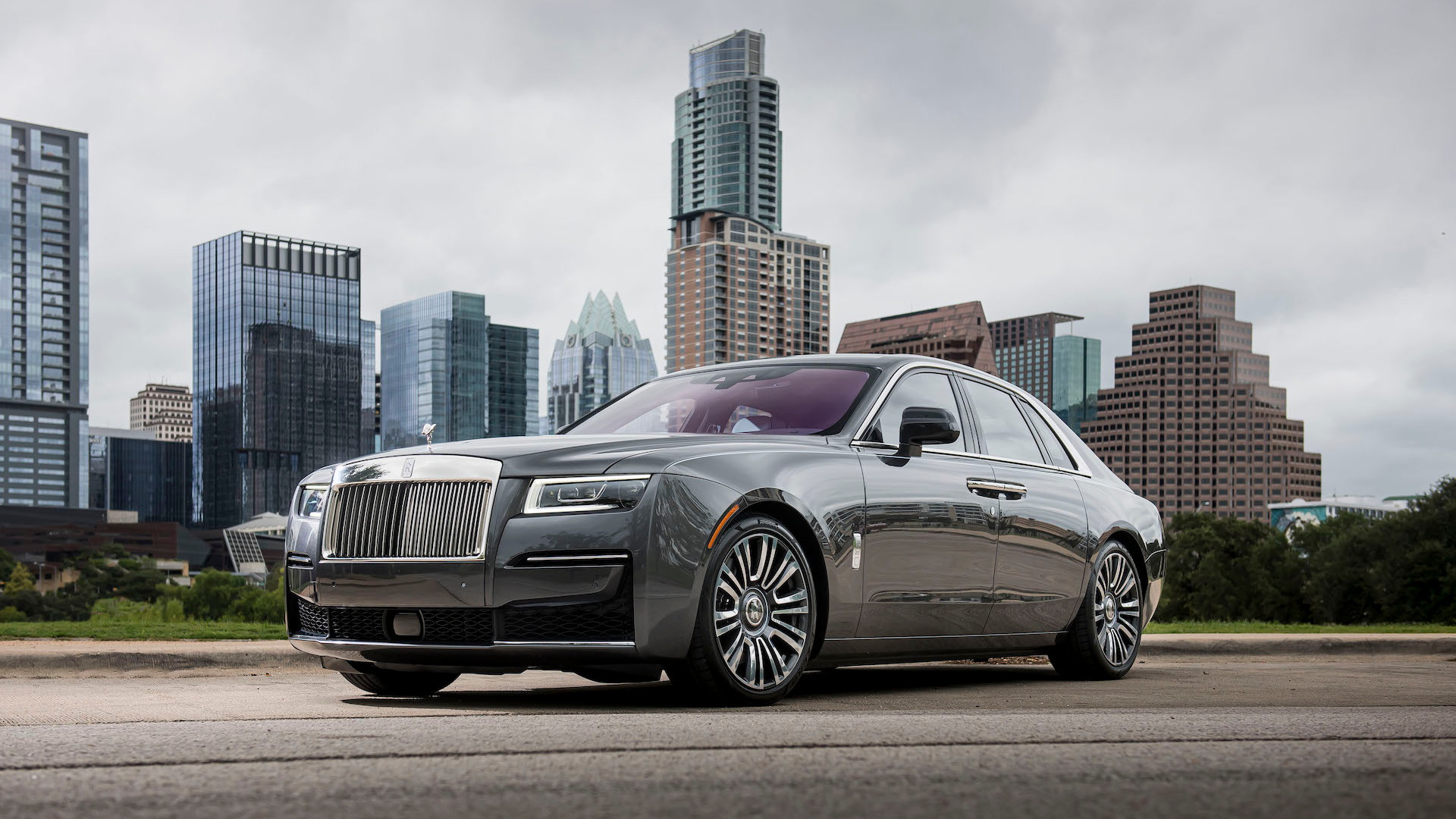 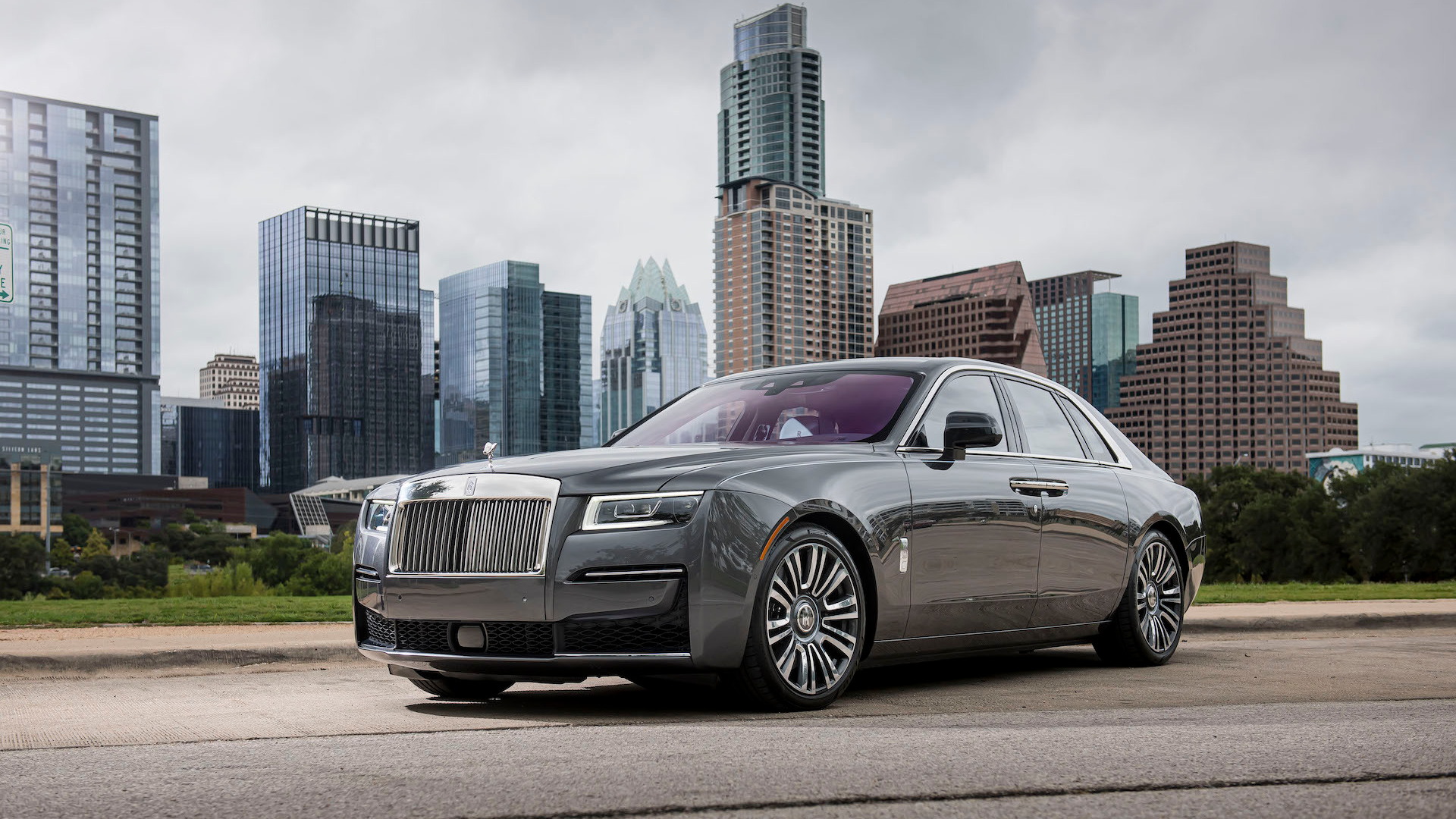 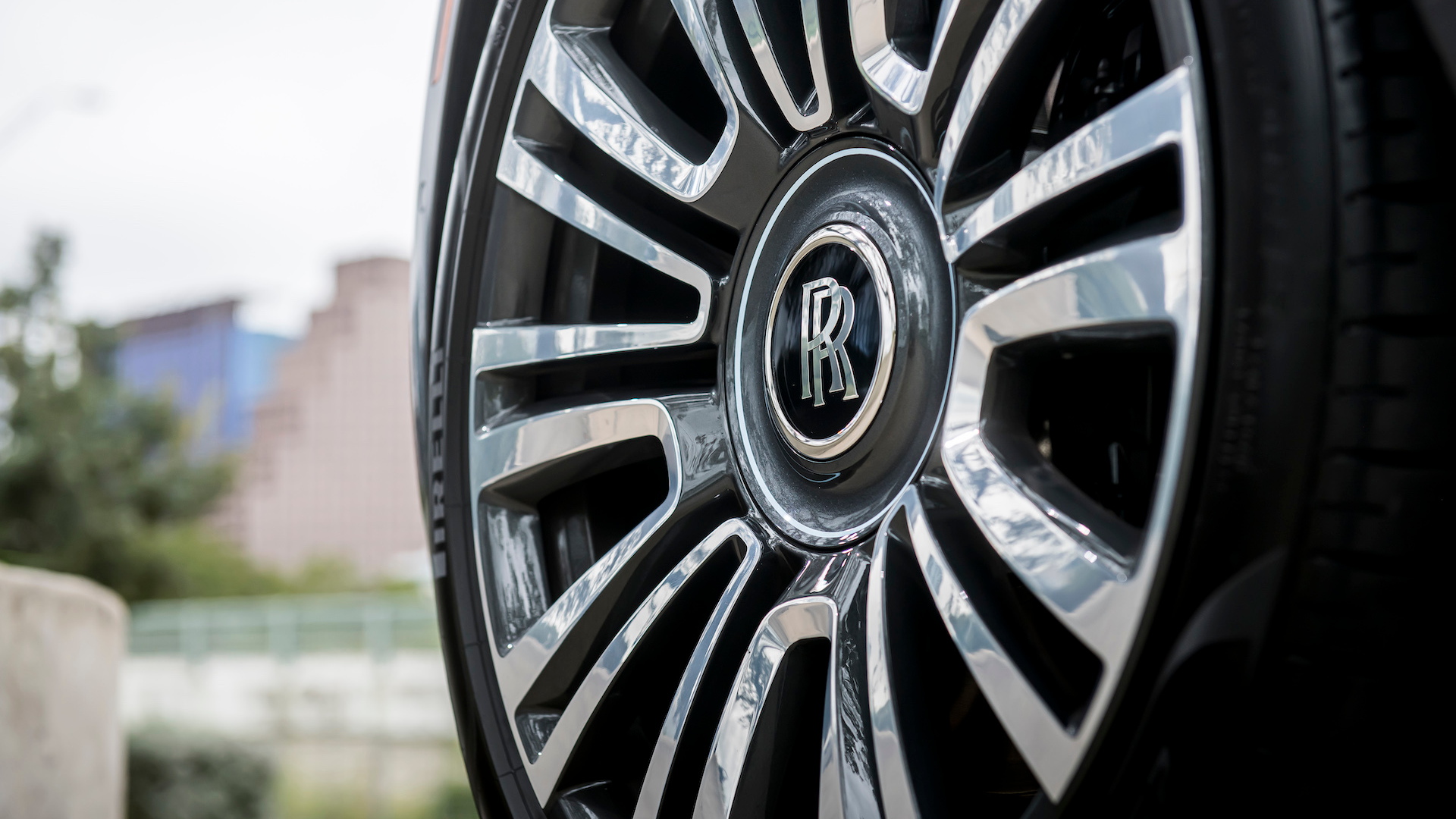 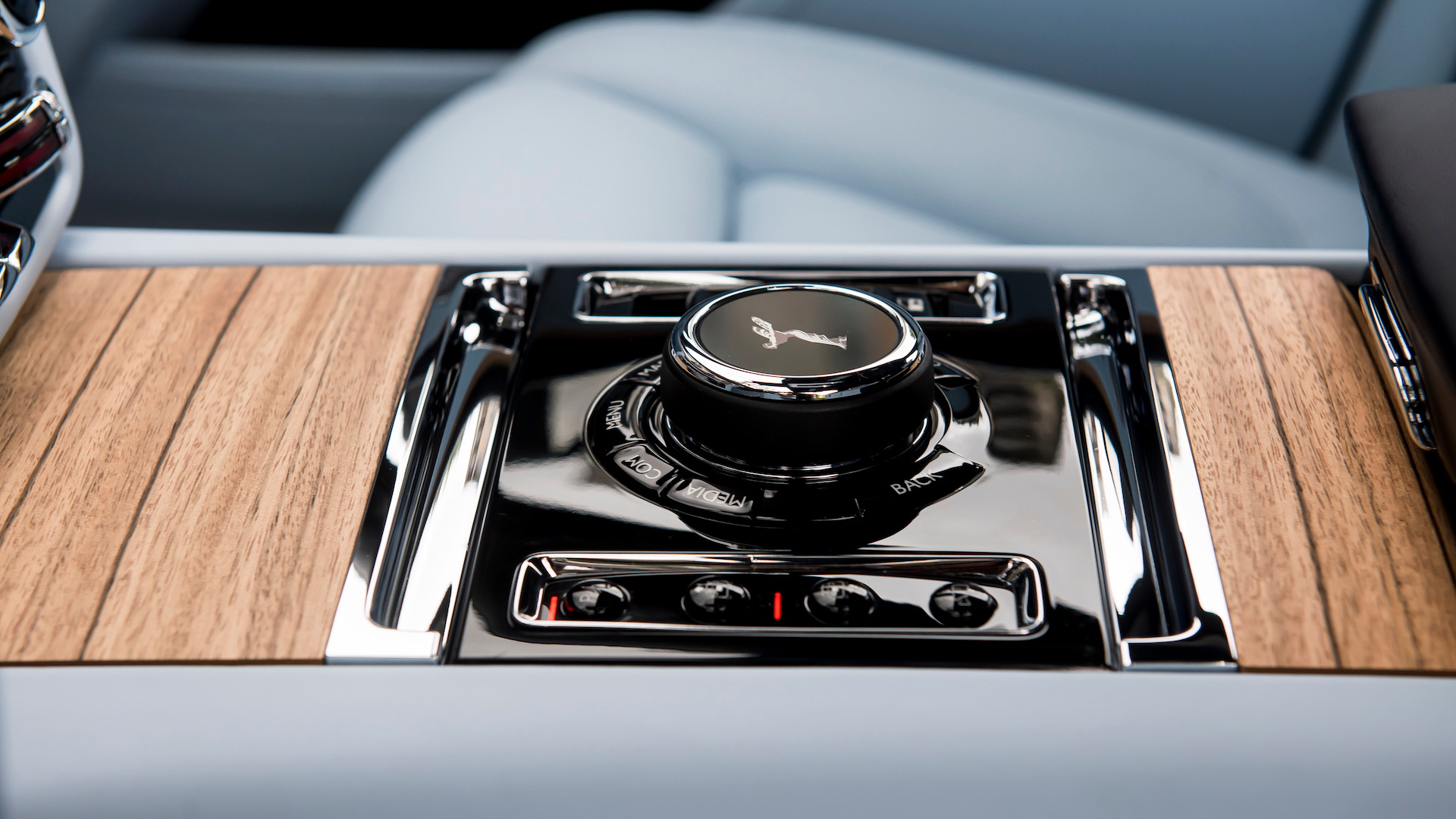 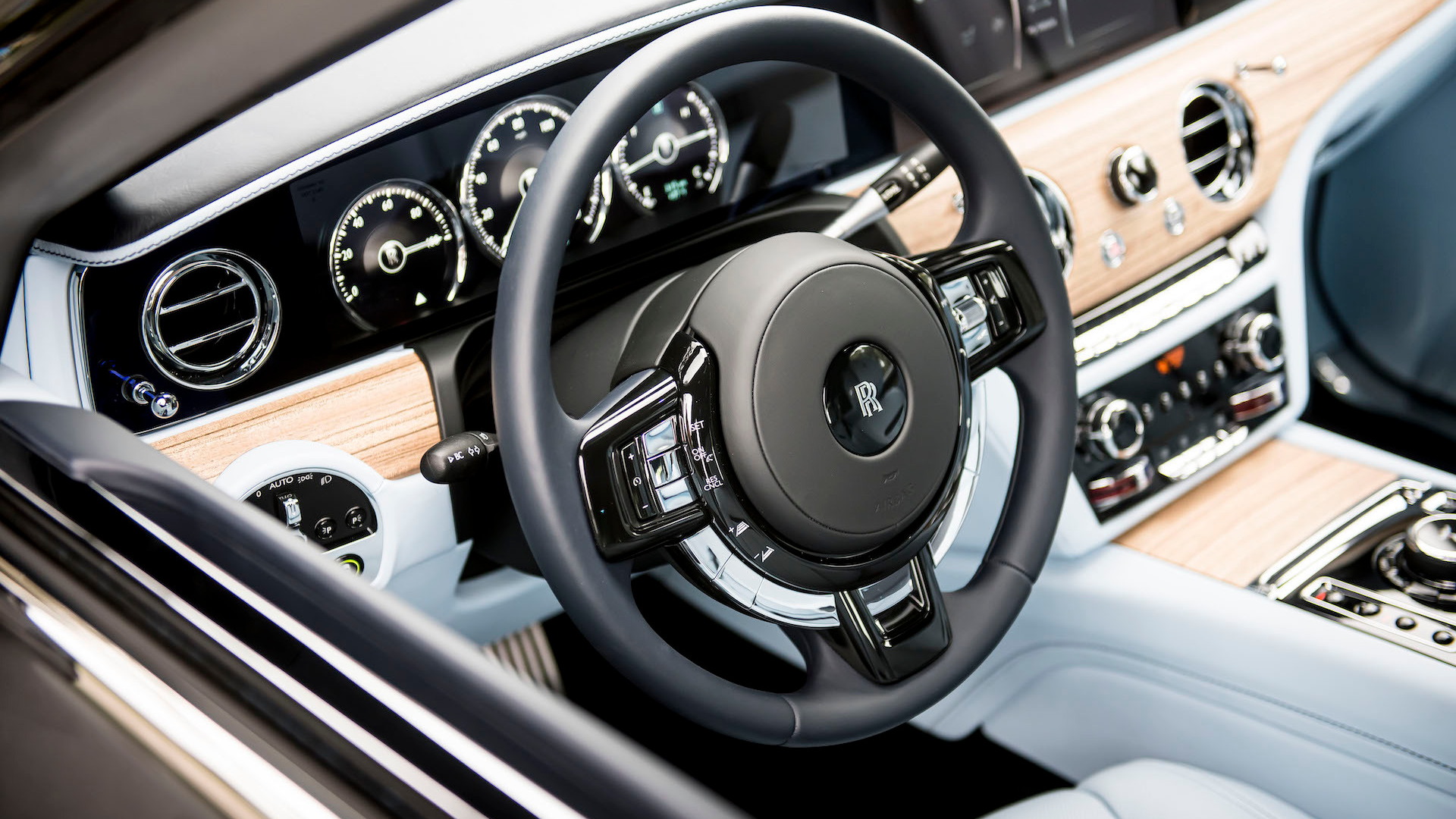 “Post-opulent” is the buzzy portmanteau you’ll hear surrounding the new 2021 Rolls-Royce Ghost, which is nonetheless a gilded car for our new Gilded Age.

Replacing the former Ghost, which was the best-selling car in Rolls-Royce’s 116-year history, the latest Ghost eschews some of the “superficial expressions of wealth” for a sleeker, more contemporary take on extreme luxury, according to Rolls-Royce.

We spent a morning driving the new Ghost outside Austin, Texas, and can confirm a few things: that the Ghost isn’t superficial, is contemporary, and is probably the best vehicle seen in the Whataburger drive-through in at least a week.

Most of the excess that’s been pared down has been scraped from the Ghost’s hide. It downplays the Edwardian grille of the Phantom sedan and Cullinan SUV in size, while it burnishes its glow with 20 LED lights that send rays of light down its veins. The Ghost rounds down the high and crisply formal roof and shoulder lines of the other RR cars, and angles instead for billet-smooth body panels and a tapered silhouette with strong horizontal cues and only a thick band of chrome or two. It’s loose but structured like a good sport coat; it’s Rolls’ Fuselage car, one with coach-style rear doors that play anachronistic games with the thin fillets of LED headlights and lozenge-shaped taillights.

While European legislators are taking away her power, the Spirit of Ecstasy has new agency on the Ghost hood. She’s split off from the grille, and now stands on her pedestal, ready to dive into an infinity pool of chrome.

The Ghost cabin echoes her Esther Williams realness on a dash-mounted display that takes its place on a wide, almost uninterrupted dash that’s spared much of the old button clutter. Open-pore woods now can trim the cabin, while other finishes mimic lava rock and amber speckled with aluminum. Burled walnut is as out of date as Burl Ives in here. I drove a Ghost upholstered in sky-blue leather even applied to the underside of the dash cap, paneled in a light open-pore wood, fitted with speaker grilles that could double as grates for a KitchenAid pasta maker.

A dazzling sideshow to the minimal treatment sits in front of the passengers, where a spray of 850 stars lit by 152 LEDs casts a constellation’s glow like the one that emanates from the Starlight headliner. Lighting is the new chrome.

Bristling with new driving technology, the 2021 Ghost charges ahead behind a 563-horsepower 6.8-liter twin-turbo V-12 with 627 pound-feet of torque, sent to all four wheels via an 8-speed automatic. The Ghost gathers itself up to a hustle so quickly it surprises a cocky Model Y caught napping. Nearly noiseless, its shifts are so seamless they feel like they’re handled by some offshore call center. I’ve used sewing machines that were less smooth.

Rolls pegs the 5,490-pound Ghost’s 0-60 mph time at less than 4.8 seconds, with a 155-mph top speed. Don’t look for drive modes or selectable moods here: that’s all filtered off as excess information that’s better left to everyday drivers—you know, like a BMW 7-Series.

The Ghost’s standard all-wheel-drive system can split power from the rear wheels and send it to the front in a 50:50 ratio. All-wheel steering edits the cornering line for the large sedan, while a new air-sprung suspension with adaptive damping also has a control-arm on control-arm arrangement that isolates the front end better from the road. The road surface feels unbroken below the Ghost, with only an occasional stone skimming its surface; that’s because forward-facing cameras stare down at the ground ahead to predict bumps and allow the Ghost’s suspension to react better, and the transmission ingests satellite-map data to smooth shifts according to upcoming terrain.

If there’s a downside, it’s the sensory deprivation that decouples the Ghost’s handling from the usual comprehension markers. Dial in some steering through the Ghost’s ginormous steering wheel and it simply zippers its way through roads with flat, filtered response.

If size matters, the Ghost is 218.3 inches long, and 77.9 inches wide; it glides along on a 129.7-inch wheelbase. It opens its vast interior space through self-opening and closing doors that leap to work with a slight tug on the handle or the push of the door-handle button. Multi-adjustable front seats could comfort any driver coast to coast; I’ve slept worse on hotel beds than I think I could in the Ghost’s back seats. An air-purification system keeps the Ghost’s air from going stale, and myriad power adjustments to its seats, front and rear, ensure all passengers will ride along in supreme comfort. The Ghost has a 17.9-cubic-foot trunk to ensure their custom-made luggage gets there, too.

There’s no active lane control in this car—and that’s because customers didn’t want it, Rolls says. Ghost owners are control freaks, just like the rest of us.

An audio system designed specifically for the Ghost comprises 18 speakers with 1,300 watts of output. It’s bonded with the Starlight headliner to turn the dazzling thousand-points-of-light showstopper into a speaker itself.

From its infinite range in leather, wood, and other interior trims and custom options, the 2021 Ghost’s base price of $332,500 soars to more than $411,000 when outfitted with handsome blue leather and dazzling performance-art lighting. It can easily be driven into the half-million-dollar range—but Rolls knows Ghost drivers would prefer to do the driving themselves.

Rolls-Royce put us up in an Austin hotel so we could wake up to the strains of live Tex-Mex music before we drove.