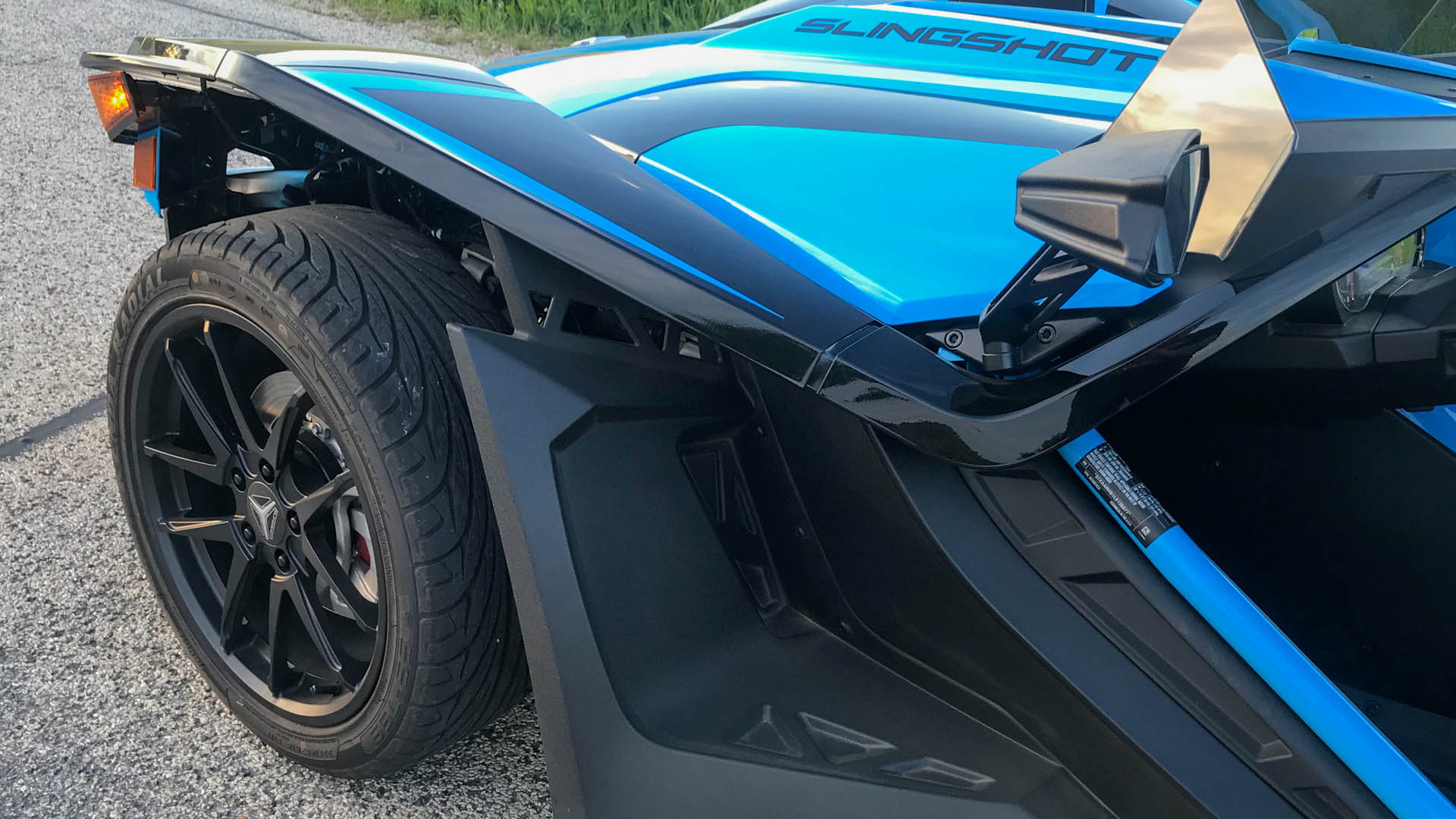 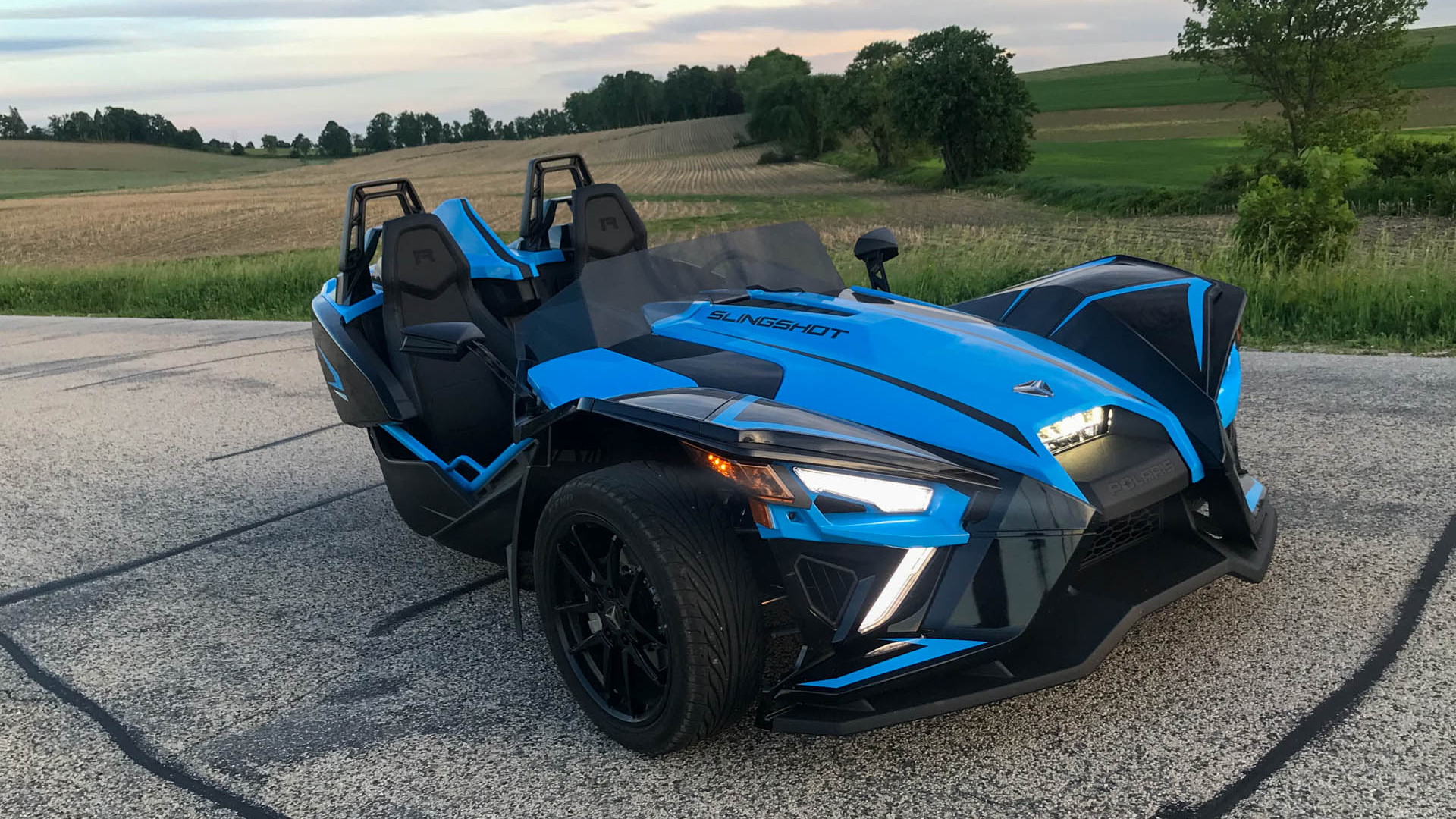 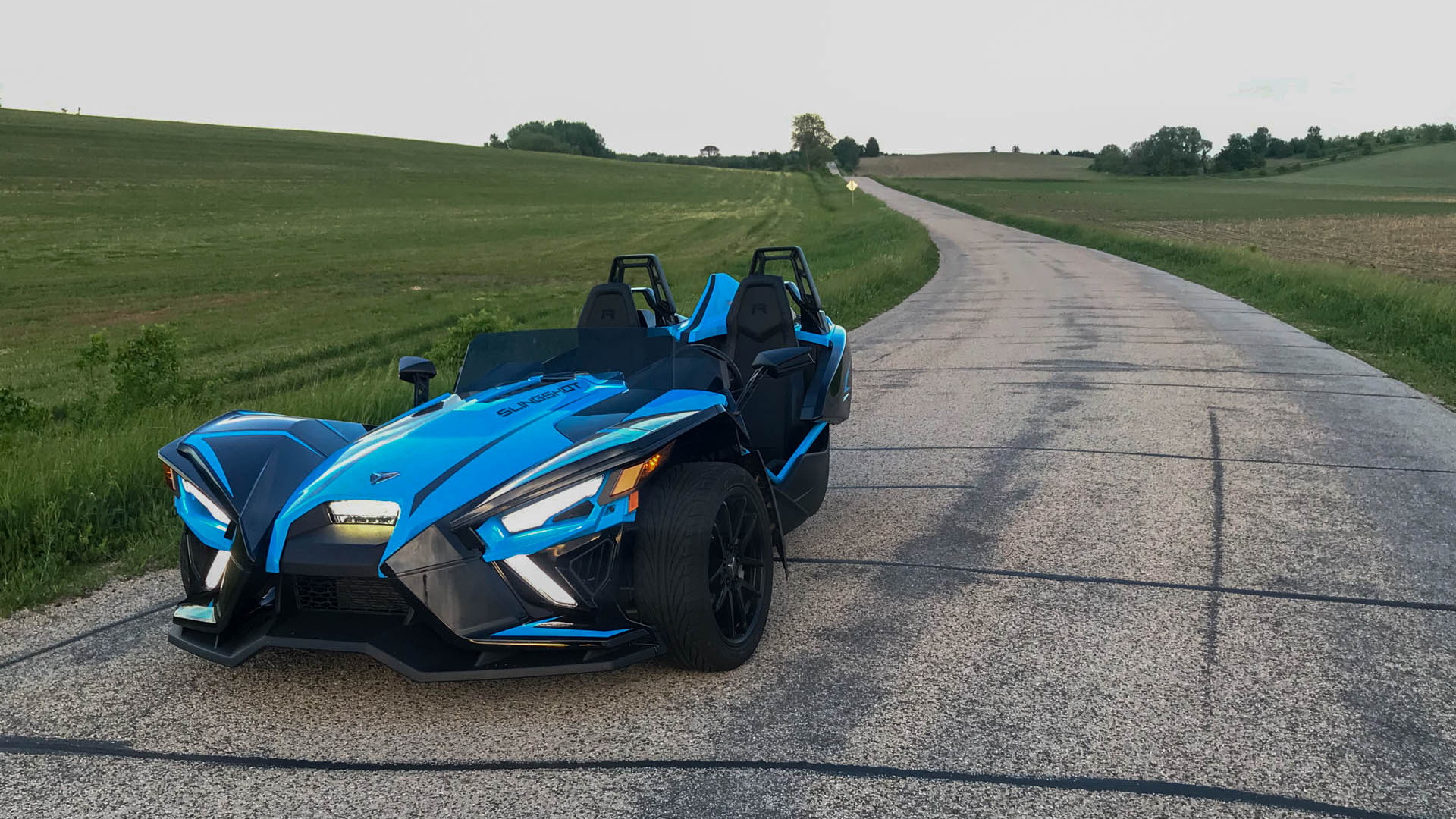 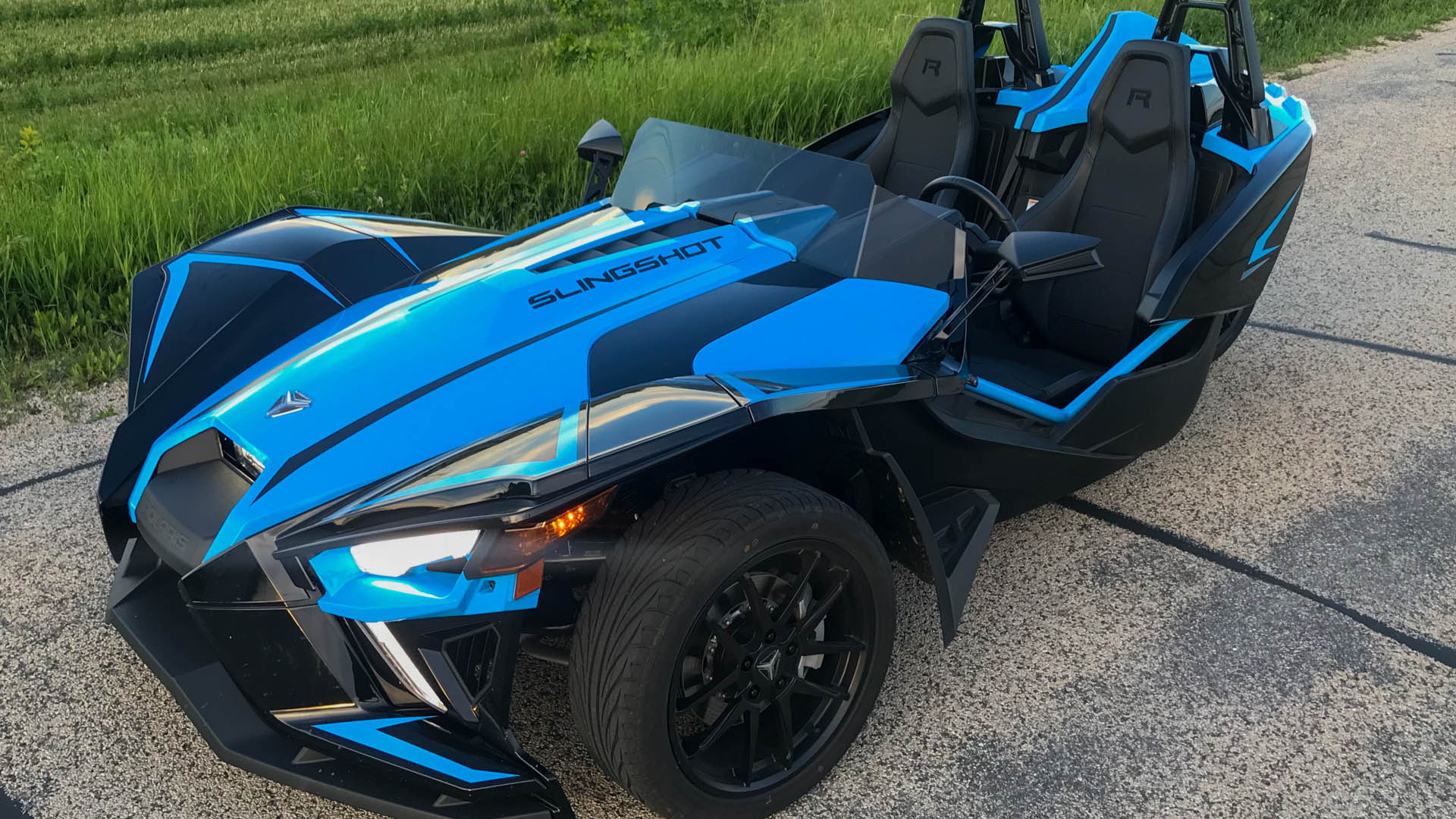 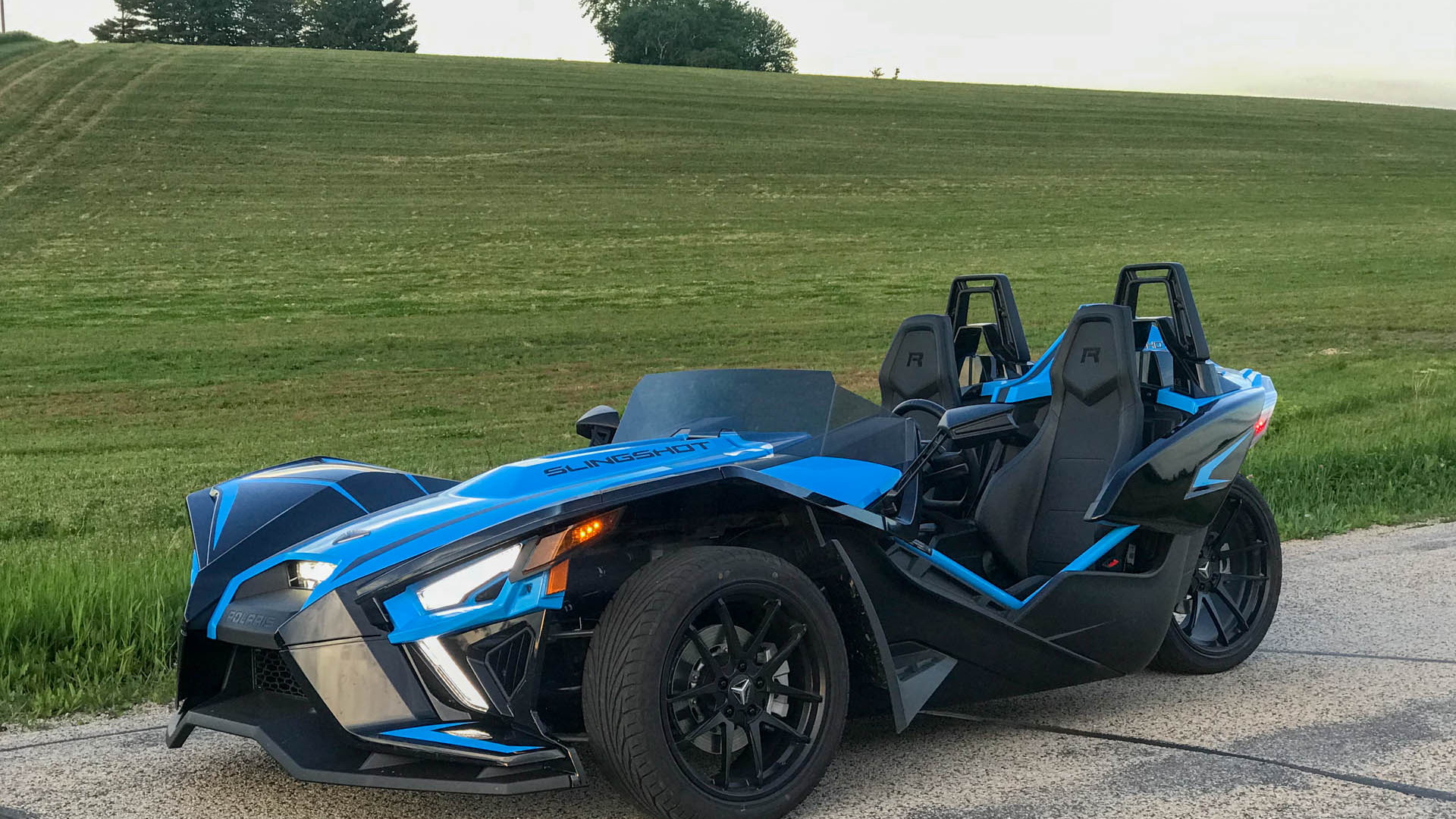 “Fantastic, man!” the middle-aged guy in a landscape hat and a dirty T-shirt called from the street corner.

“Can we get a picture?” Two sisters on bikes stopped for a snap. We obliged, and encouraged them to sit inside. “Our parents won’t believe it!”

Another young guy looped around the block, parked illegally, and reported the details to his friend on the phone. “Oh, damn,” followed each impression. “This is so fine,” he said. “So fine.”

Teachers at a graduation parade echoed similar sentiments. Jealous types even called out, “Stop showing off!”

“It’s like a roller coaster,” our 12-year-old fangirl said. It was as thrilling as it could be tedious.

Our feelings were equally mixed in back-to-back weeks in the suburbs and in the city, around town and on road trips away from Chicago at the onset of summer. We—Kirk Bell, Senior Editor of Motor Authority, and Robert Duffer, Senior Editor of The Car Connection—mostly agree that the Polaris Slingshot R is a fun toy unlike anything else on the road, but we’d have a tough time making space for it even in an imaginary three-car garage.

Thankfully for us, the Slingshot became more civilized for 2020, getting a new engine, an automatic transmission, and more creature comforts, including a brighter 7.0-inch display for navigation and connected services. Polaris offers more than 23 accessories—including a roof—to customize this kart however you want. No matter what you choose, it’s an oddball.

RD: It looks like a murder hornet on wheels. Two 18-inch aluminum wheels up front, and one giant 20-incher in back, makes it look like it’s been launched at your face. A menacing X connects the grim-faced splitter down low with broad shoulders up top. In the center of the face is a single LED headlight, new for 2020, that leads to the humped engine cover, like some kind of twitchy thorax ready to sting at no provocation.

KB: It seems like Polaris looked at what a car is, then took everything away that could still get you to point A to point B. Both front tires are needed for stability (watch a video of the Reliant Robin if you question that assertion), but only one rear wheel is necessary for acceleration, so let’s take one away. The top is gone because who needs that? You don’t need A/C because you don’t have a top. You don’t need a unibody if it doesn’t have a roof or two rear wheels, just a tube frame and a tub. It’s the driver the Slingshot intends to move, not their groceries or apartment furniture.

RD: You sit eye-level with door handles on other cars. It has the openness of a motorcycle but the seating position of an Alfa Romeo 4C sports car.

KB: Getting in is like easing into a warm bathtub. Use the vestigial body panels that run over the tube frame to lower yourself down. The tinted windshield is about six inches tall, which blocks wind up to the eyes. Closed-face helmets are recommended, but they make the experience less enjoyable. Then again, they are the safe way to go given the complete lack of structure around you.

RD: Or you could shove them in the storage lockers behind the seats.

KB: The lack of a top subjects the interior to the weather if you don’t have a garage. Thankfully, as we found out, it just needs to be wiped down after a rainstorm. It’s not, however, as resistant to bird poop.

Going down the road, feeling everything

RD: Glad I missed the poop. How did it feel on your road trip? It felt really rough on the interstate at first, but on the way back for me, I learned to enjoy it. The sport bucket seats’ high backs allow for longer, comfier trips without the fatigue of a motorcycle.

KB: I didn’t think the ride was too firm. I really didn’t want to wear a helmet, but it’s the smart thing to do on the freeway. I had to listen to music instead of podcasts because the combination of the wind, a helmet, and the buzzy engine muddle the sound from the weak 100-watt Rockford-Fosgate audio system, which does its best by raising the volume automatically with engine revs. I was disappointed in the fuel economy. I upped your 21.6 mpg figure to 22.3 mpg with more highway miles. I was expecting motorcycle gas mileage and got a mid-size SUV figure. Driving home at night in 54-degree weather required borrowing an old Green Bay Packers jacket that saved my skin, literally.

RD: Boy, does the dynamic volume come in handy. It’s nearly as loud as a motorcycle with straight pipes, and it is only as smooth as the roads being driven. It feels different than any car or motorcycle.

KB: Yeah, it’s put together differently, too. The drivetrain consists of a front-mounted engine that drives the rear wheel via a chain, like on a bike, instead of a driveshaft. It has little or no sound deadener between the engine and the driver, and the road is just inches away.

KB: Polaris sells the Slingshot with a 6-speed manual transmission or an AutoDrive 5-speed single-clutch automated manual that’s new this year. The automatic doles out its shifts like they’ve been ordered by a simpering bureaucrat, sent down to shift processing where they have to be signed in triplicate by the department head, and sent by pneumatic tube back to shift management, where the shift is triggered by a petty functionary who may or may not be on break. To be fair, all single-clutch automated manuals act this way, and that’s why they’ve fallen out of favor. That pause between gears takes way too long, and Slingshot falls on its face when the drivetrain is disengaged. A Slingshot mode holds gears longer, makes shifts slightly quicker, and stiffens the already firm ride, but it’s not enough to give this transmission any charm. Give me the manual any day.

RD: It’s so bad. You could count two generous seconds during a shift. Like, are you sure you want this shift, maybe we should check with the department head one more time?

KB: Not knowing when it will shift can ruin the fun. The front tires bite nicely and carve a sharp line enhanced by plenty of steering feedback. The rear wheel is a wide 305/30R20 Kenda SS-799, but it’s just one tire, so it doesn’t have the grip to keep the rear end locked down when you rail on the throttle mid-corner. That can make for tail-out fun, but the damn automated manual needs to cooperate to deliver the power when you want to slide the rear. Steering wheel shift paddles would help, but they’re not offered. A Polaris rep told me the company may offer them in the future.

The same rep told me that an automatic transmission was the No. 1 request from customers. Had Polaris delivered an actual automatic, especially one with shift paddles, the Slingshot would be much more fun. Be careful what you ask for.

The sling in Slingshot

KB: For 2020, the Slingshot trades its GM-sourced 2.4-liter 4-cylinder for a new 2.0-liter 4-cylinder built in-house that makes 203 horsepower and 144 pound-feet of torque in the R. Without as much torque as a Chevrolet Sonic and a smaller rear contact patch than a Mitsubishi Mirage, the Slingshot R doesn’t rock you back and kick you in the gut when accelerating hard. Instead, the rear tire scrabbles for grip, a cacophony of largely unmuffled screams bellow from the engine, and the lightweight Slingshot R rapidly gains momentum. Polaris says the 0-60 mph run takes 5.0 seconds. It may not feel that way in my butt dyno that’s used to torquier engines, but the Slingshot R builds speed with so much urgency that I believe that figure.

RD: I’ll stick to what impresses, and that’s not the butt dyno.

The 2020 Slingshot R gets a 30-horsepower boost versus the base model. Nothing crazy, but with a weight of just 1,654 pounds (about 50 pounds lighter on average than the 2019) and a transmission that would rather not shift, this cross between a roadster and a motorcycle gets moving quick and the visceral elements make it feel more powerful than the specs suggest.

The Slingshot is a giggle-maker, but that rear rubber needs to warm up, and even then it wiggles and waggles like a dumb pup.

KB: The change to a higher horsepower/lower torque engine was a smart move because the power can break loose the rear wheel during even mild launches. The rear tire adds grip as it warms up, so it doesn’t always slide around, but a torquier engine could make for a less-controlled ride.

RD: It’s not a cheap or overly expensive toy, and it’s limited to seasonal use. If you had the means, and a place to put it, would you get one? The 2020 Slingshot R runs $32,699 with the automatic.

KB: I wouldn’t buy one. I’d buy a Mazda MX-5 Miata, which costs about the same. However, I can see why fans would want one. It’s fun to drive and even more fun to make friends with the people who come to ogle it.

RD: It has some charms, for sure—the low ride height, open body, go-kart roller coaster roughness, and that single-chained wheel whipping behind you makes for face-splitting grins. But that transmission.