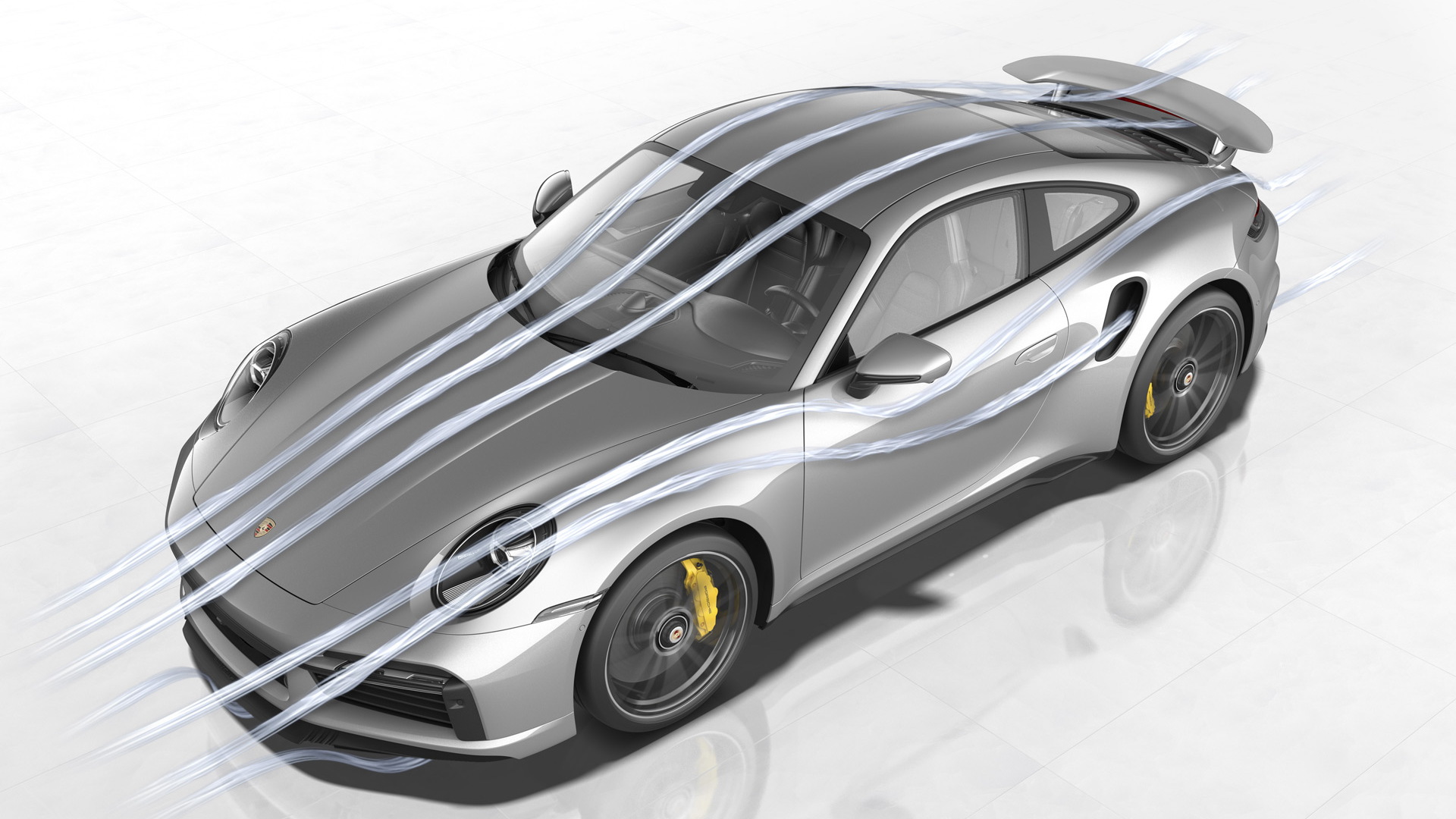 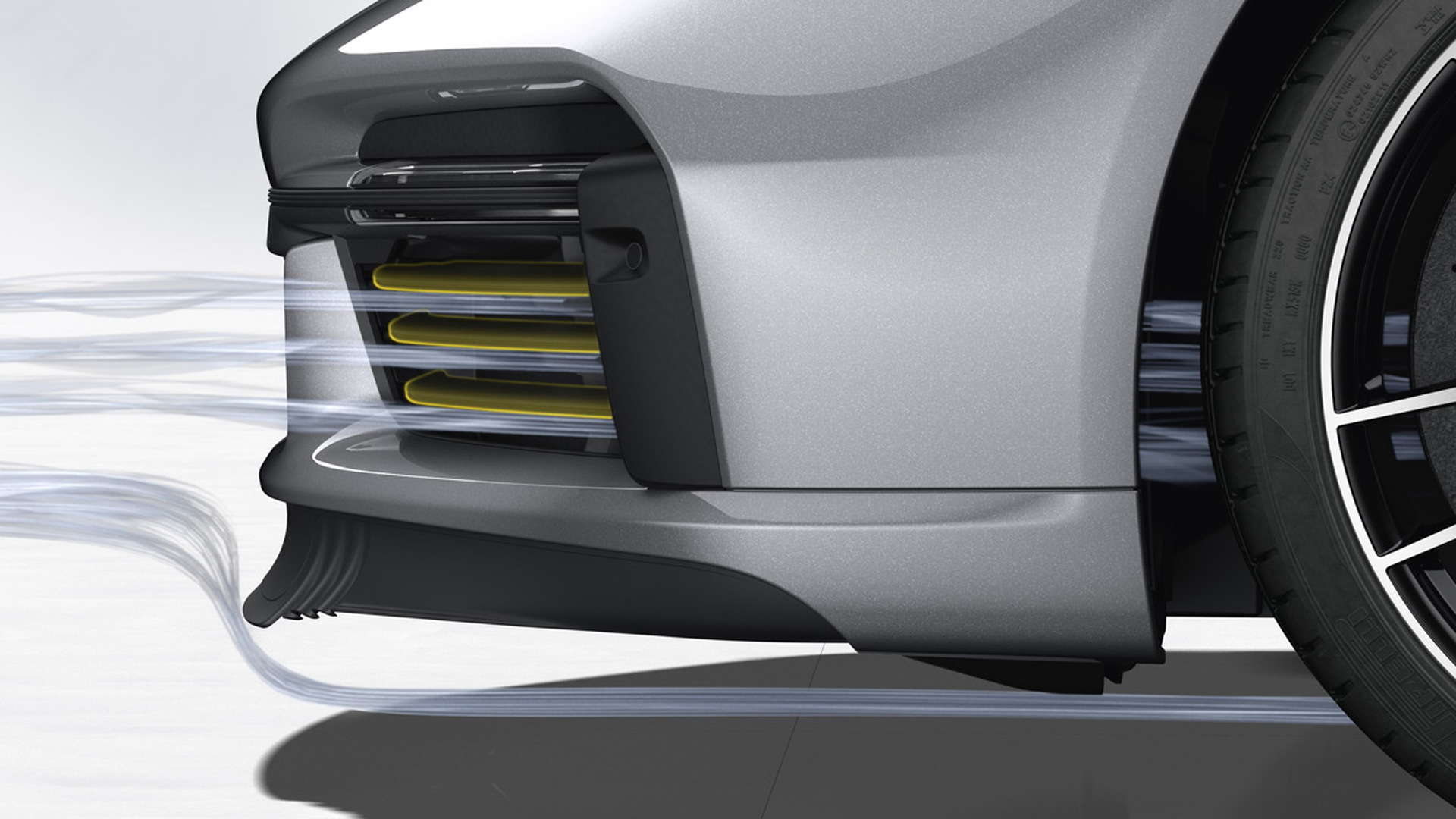 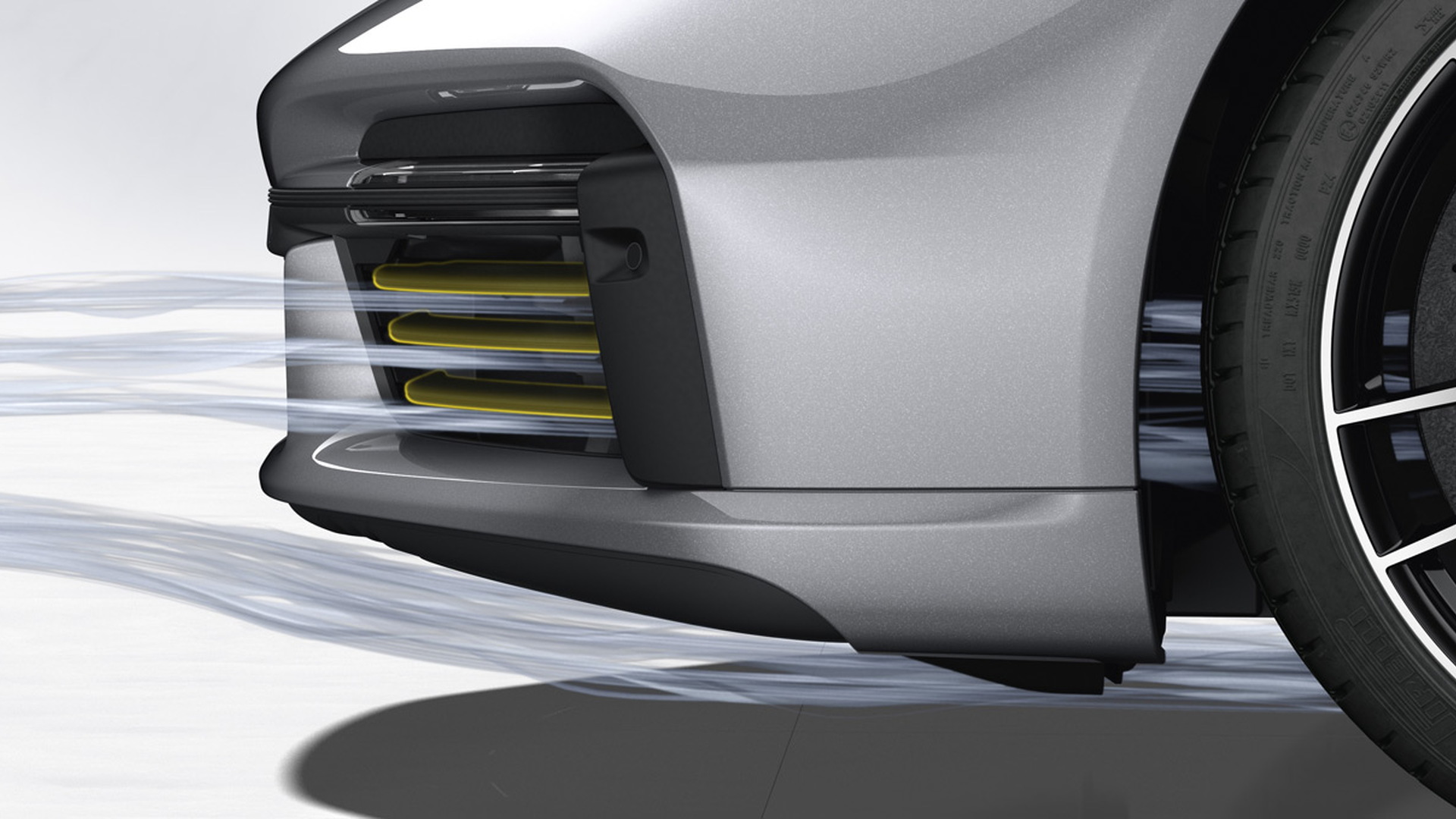 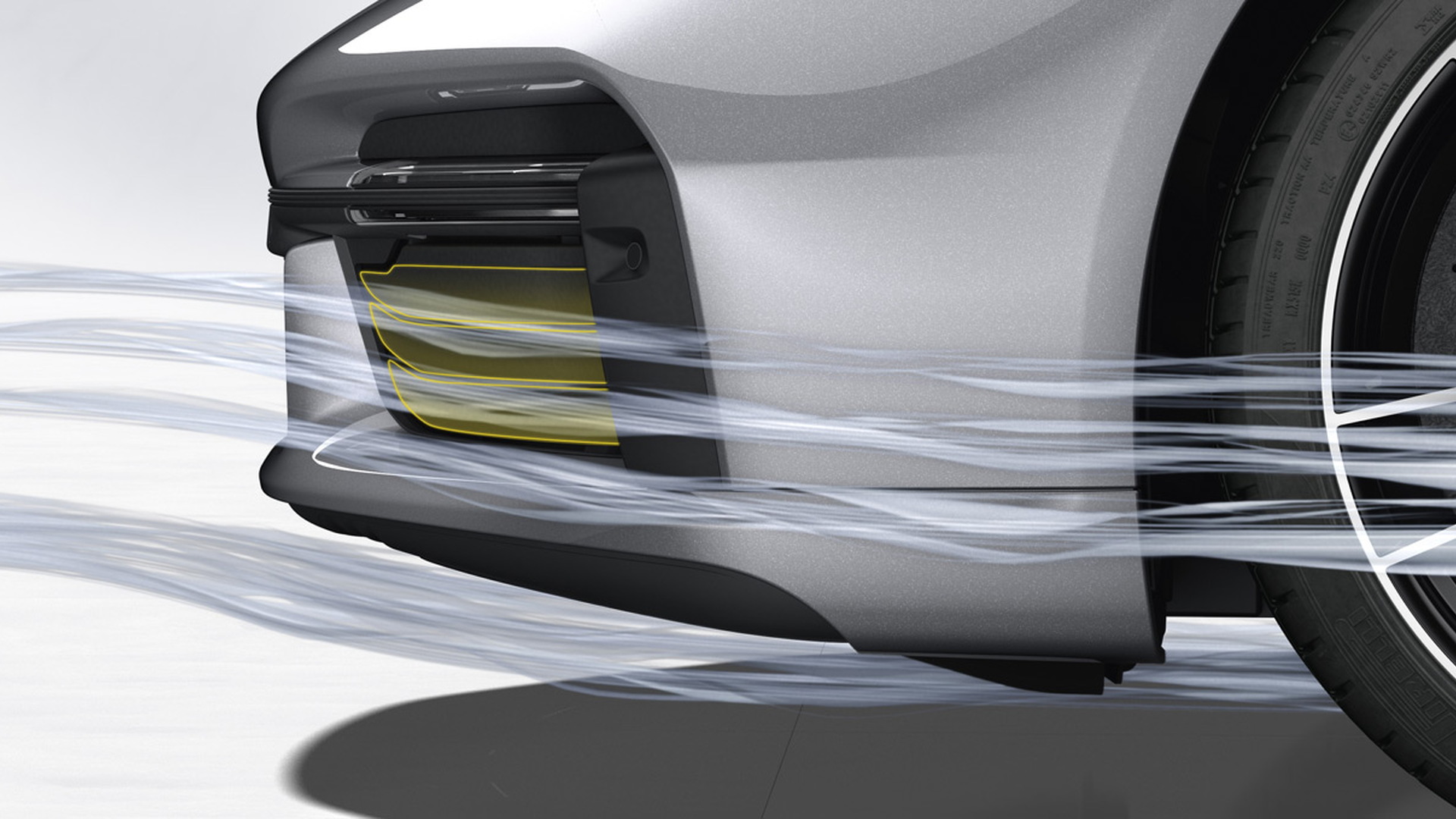 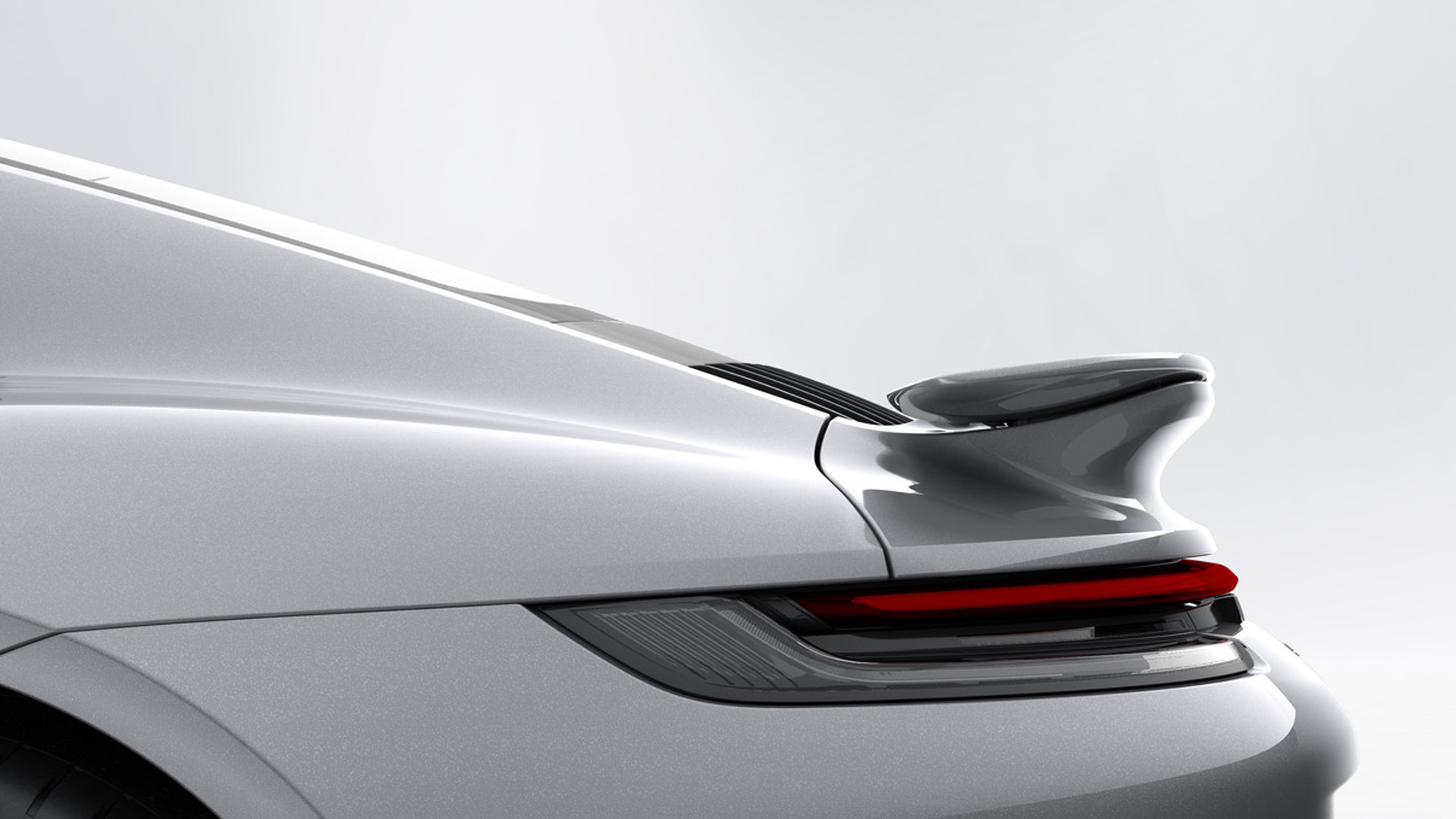 In the world of fast cars, proper management of air flow is just as important as what's found under the hood. In the past, elements used to shape the air were typically fixed or had some level of manual adjustment. Today, though, active aerodynamics is relied upon to prime a car for every driving situation.

Porsche has just released a video detailing the active aero elements on the 992-generation 911 Turbo S which is a new addition for the 2021 model year. Grouped under the Porsche Active Aerodynamics banner, the elements include the front spoiler, rear wing, and cooling apertures in the front fascia.

The challenge is to balance the competing goals of high downforce and low drag. With active aero, you get the best of both worlds. For instance, on the Turbo S, the lowest drag setting, ideal for efficiency, sees the front spoiler and rear wing retracted and the cooling apertures closed off. This results in the car's lowest drag coefficient rating of 0.33 Cd.

At the other end of the spectrum is the high-downforce setting. By extending the front spoiler and rear wing to their fullest position, downforce is increased by 15 percent overall, resulting in a maximum 375 pounds. The rear spoiler will also act as an airbrake. It's designed to extend automatically in the event of full braking at high speeds.

We should point out that the front spoiler is divided into three segments (it's actually a single piece made from a flexible plastic called elastomer that's bent into shape using actuators). For top speed, only the outer edges extend for stability, whereas for high downforce during cornering, all three sections will extend. At slow speeds, like around town, the whole unit retracts, making driving over pesky speed bumpers less of a pain.

The method in which the active aero elements operate is controlled by the various driving modes, i.e. Eco, Normal, Sport and Sport Plus. On the latest-generation 911 models, there is also the new Wet mode and this too has specific settings aero the active aero elements. In this case, the aerodynamic balance is moved toward the rear axle for greater stability on slippery roads.

Porsche notes that the active aero also acts to minimize turbulence in the cabin when the coupe's sliding roof or convertible's folding roof are in an open position.

The new Turbo S reaches dealers in late 2020. Pricing starts from $‭204,850‬ for the coupe and ‭$217,650‬ for the convertible. Both figures include destination.