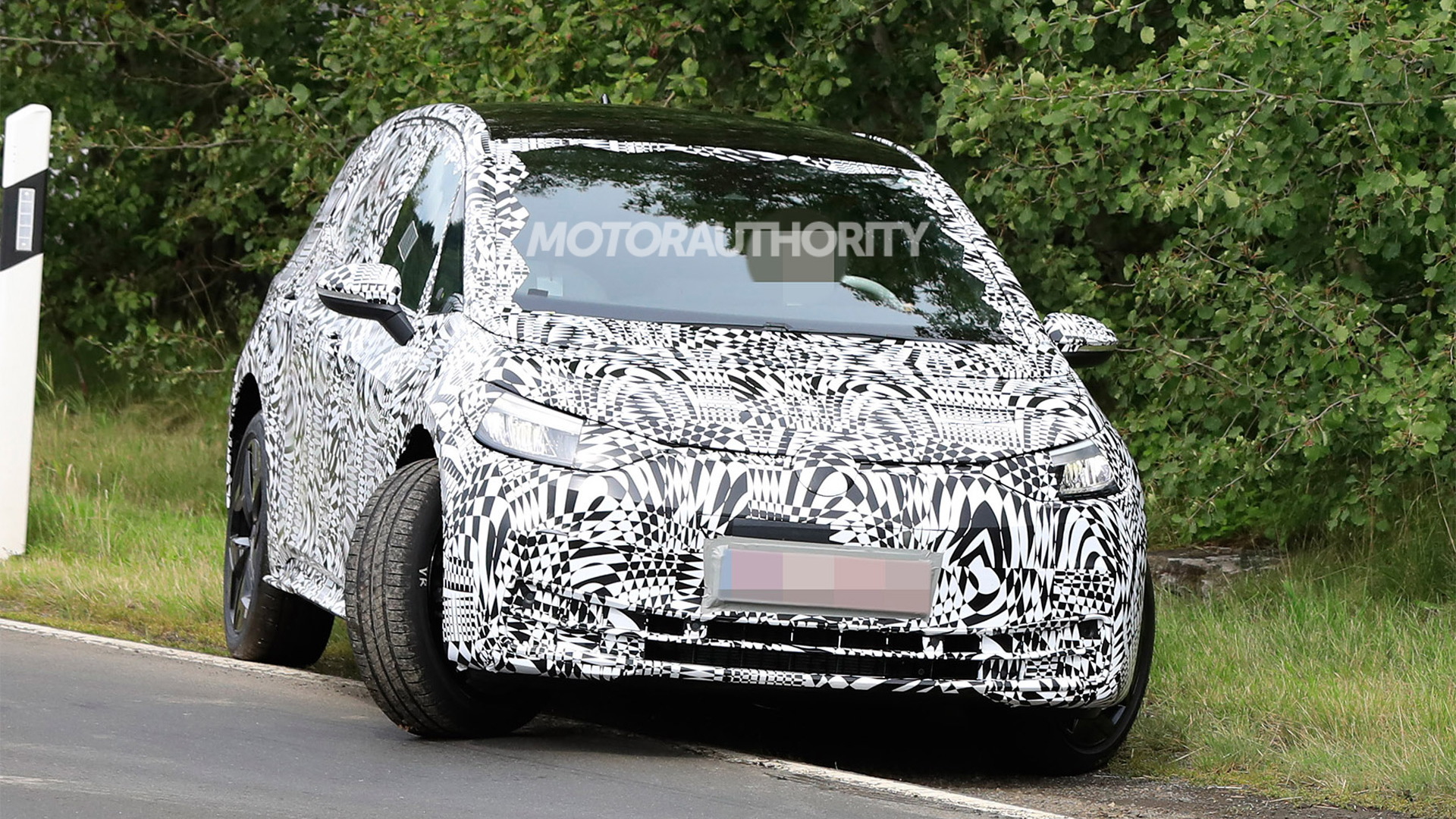 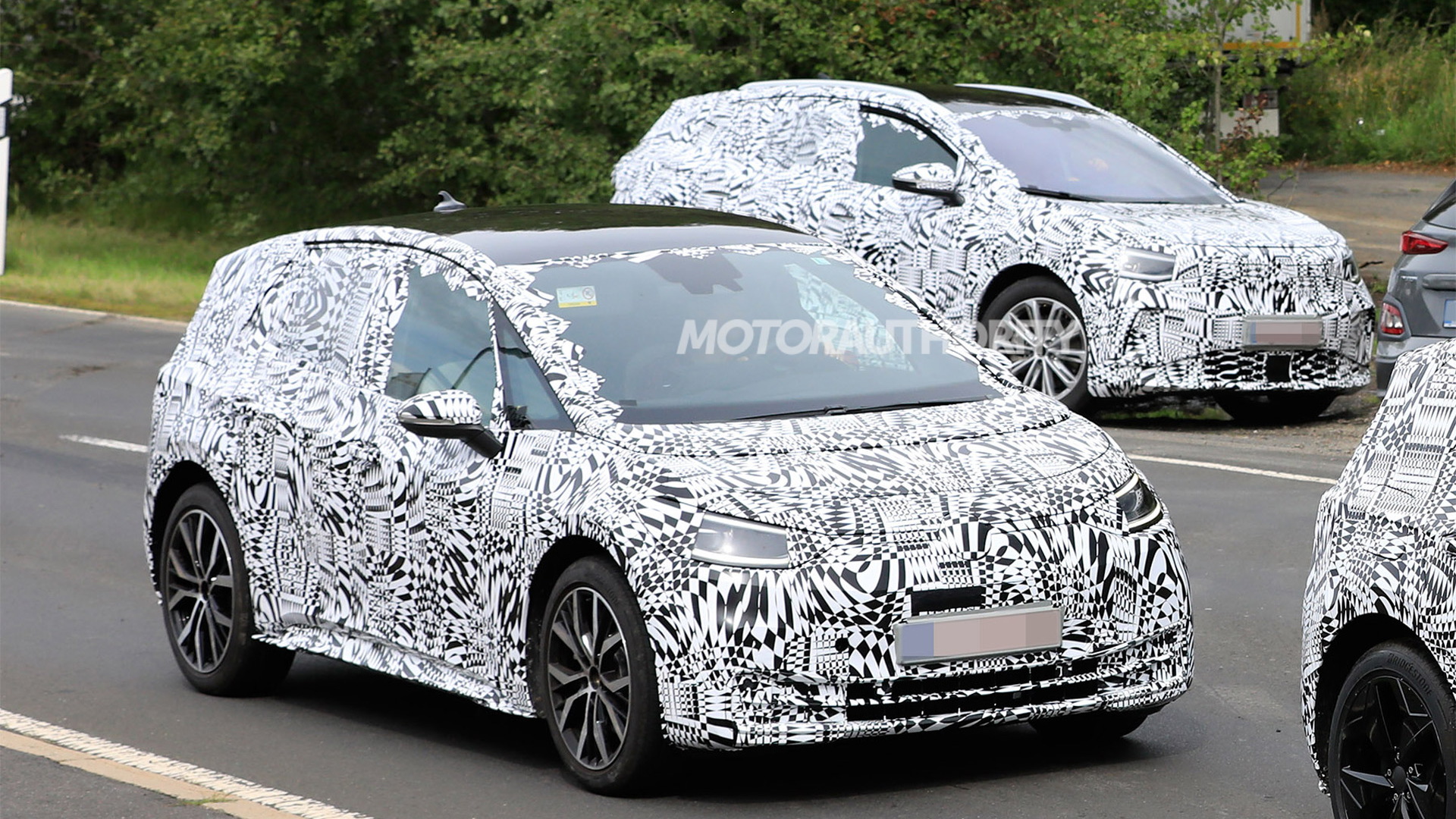 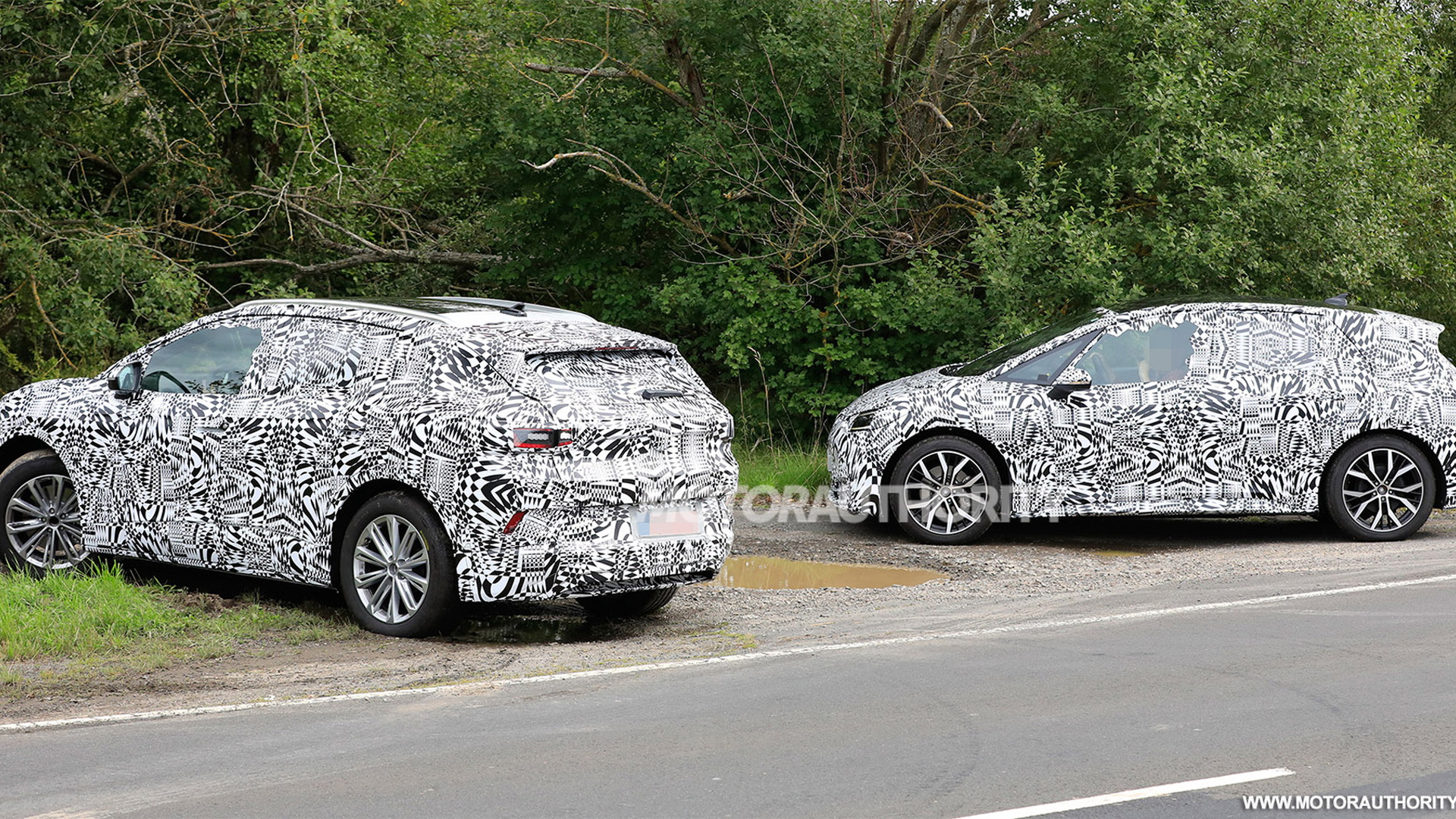 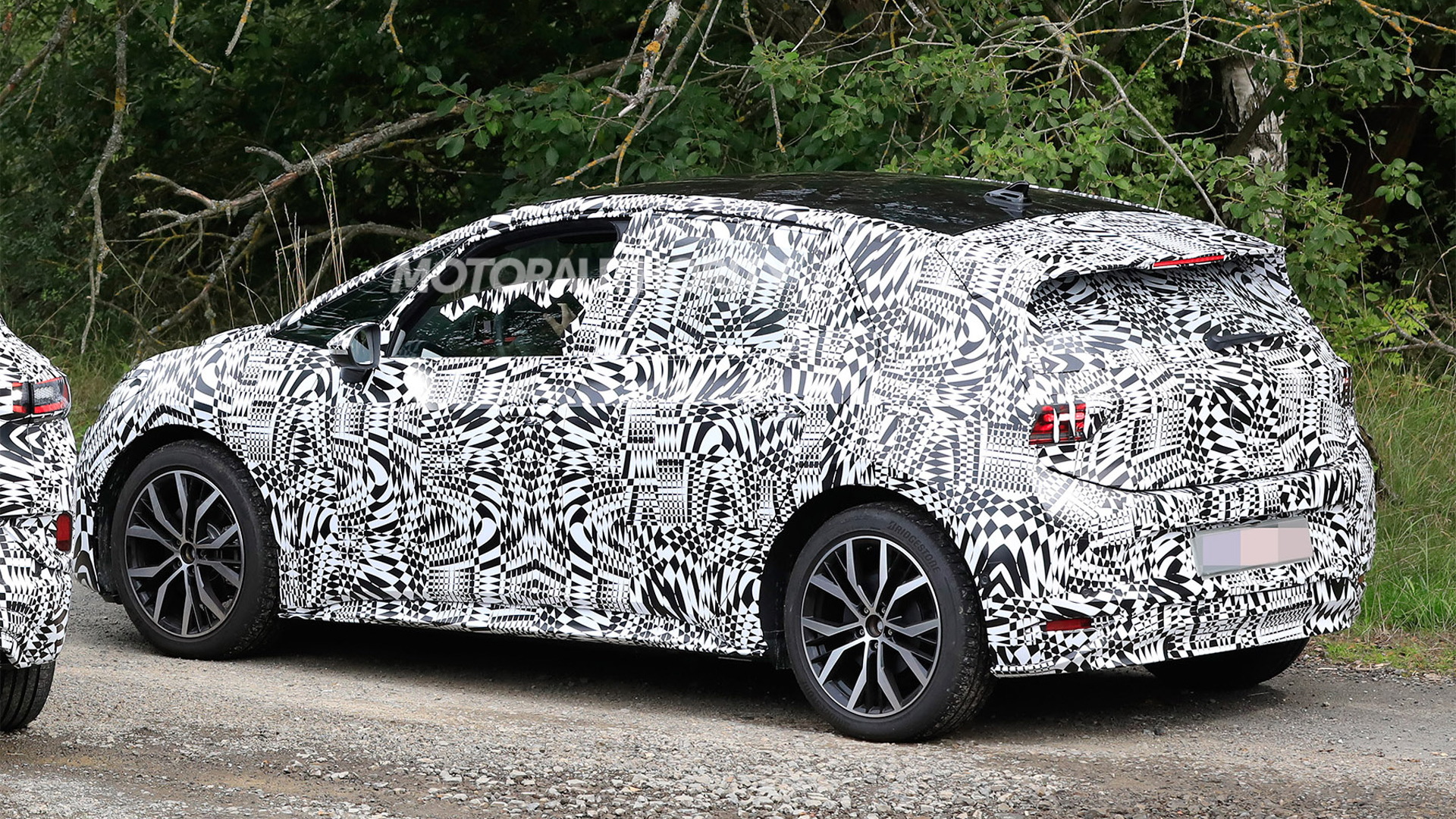 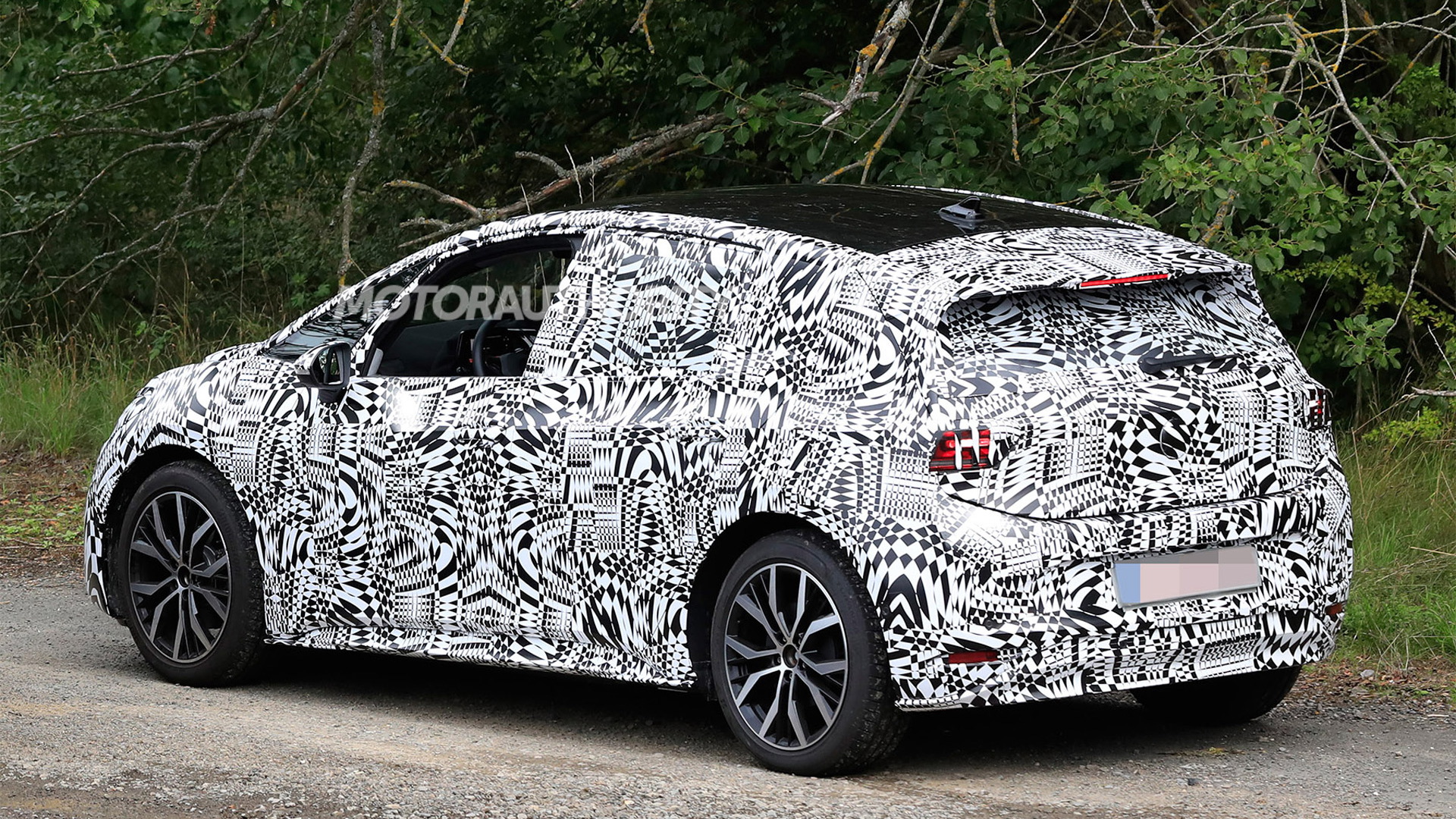 The first model from Volkswagen's new family of ID electric cars has been spotted testing in prototype form.

Confirmed as the ID 3, the car is a compact hatch similar in size to VW's Golf. The design was previewed in 2016 by the ID Neo concept, which this production version clearly resembles. Conventional side mirrors have replaced the camera-based system of the concept, however, and conventional door handles have replaced the show car's electric mechanism.

The ID 3 makes its formal debut at September's Frankfurt International Motor Show, with the car's arrival also marking the start of VW's transition to an EV manufacturer. Yes, many other ID electric cars are coming, including an ID 4X (name yet to be confirmed) based on 2017's ID Crozz SUV concept. It can be seen testing alongside the ID 3 in the latest shots.

Unfortunately the United States is unlikely to see the ID 3. Instead, the first of the ID cars here will be the ID 4X, due in 2020 most likely as a 2021 model. A spiritual successor to VW's Microbus based on 2017's ID Buzz concept is also planned for the U.S. It will arrive around 2022 and will most likely be joined by a commercial version.

Although the ID 3 is about the size of the compact Golf, interior space is said to be similar to the mid-size Passat thanks to the flat, skateboard-style design of the MEB platform that Volkswagen Group has developed for its non-premium electric cars. VW Group said 27 MEB-based models spread across four brands (likely VW, Skoda, Seat and Audi) will be available by the end of 2022, ranging from subcompact cars up to the aforementioned Microbus successor.

VW will offer the ID 3 with a trio of battery options with the range on a single charge starting close to 200 miles and topping out above 300 miles. The batteries are thought to come in 45-, 58- and 77-kilowatt-hour capacities. A single electric motor is expected to power the rear axle but some ID variants may offer all-wheel drive via an electric motor at each axle, which the car's MEB platform is capable of.

Pricing is yet to be locked in but VW is targeting a base price in its home market of Germany of under 30,000 euros (approximately $33,300). The automaker has said its EVs will eventually be priced similarly to a comparable diesel-powered model.

Order books for the ID 3 opened in Europe in May and within the first 24 hours more than 10,000 reservations were made. VW has the capacity to build 100,000 of the electric hatchbacks per year.

To ensure its customers will have a place to charge their cars out on the road, VW is working alongside several other automakers as part of the Ionity project. Ionity aims to have 400 fast-charging stations along Europe's major roads and highways by 2020, and will also be expanding into other regions, including the U.S. Ionity's chargers will offer charging at up to 350 kilowatts, which can charge an applicable battery to 80-percent capacity in 15 minutes or less.