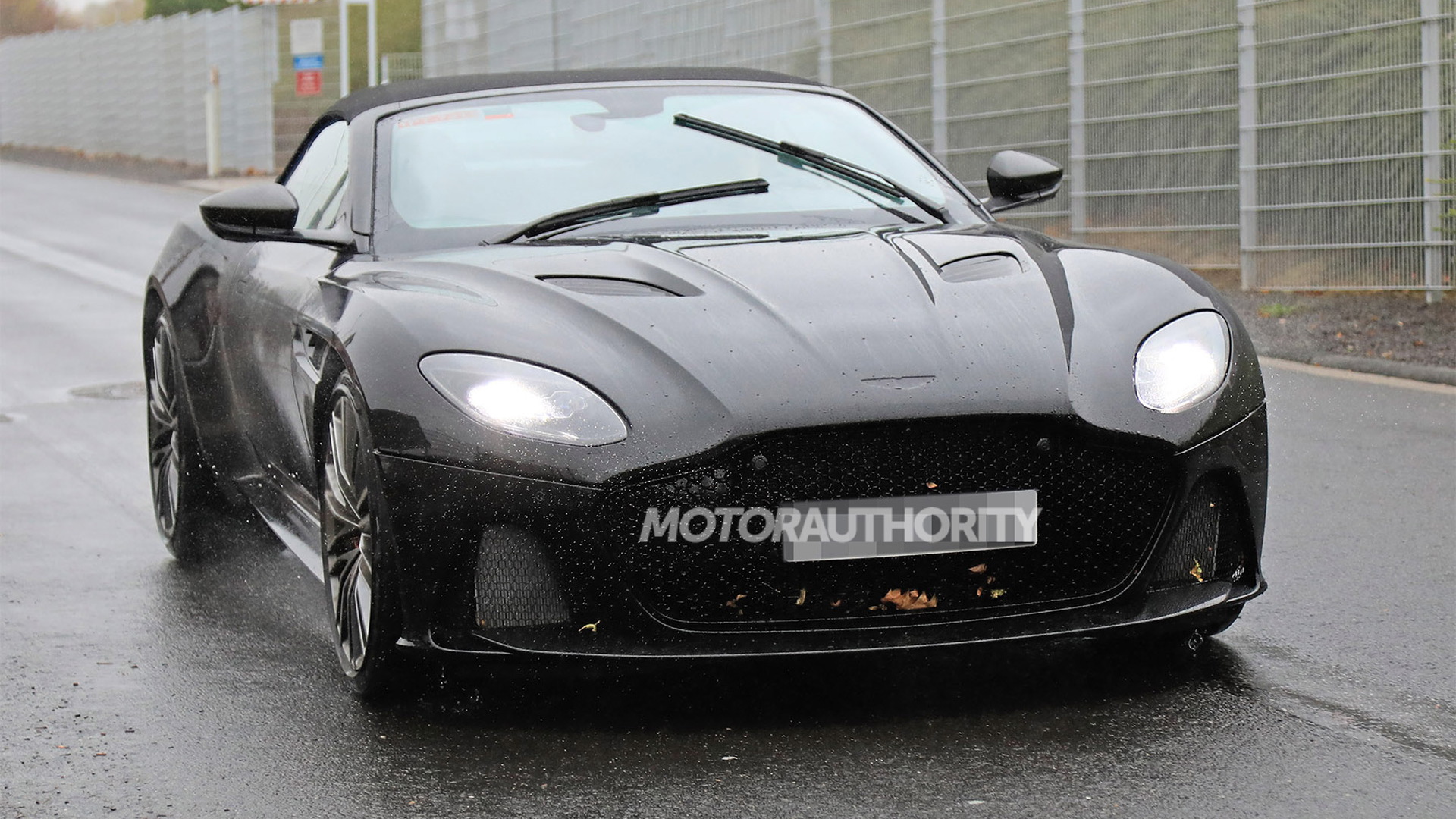 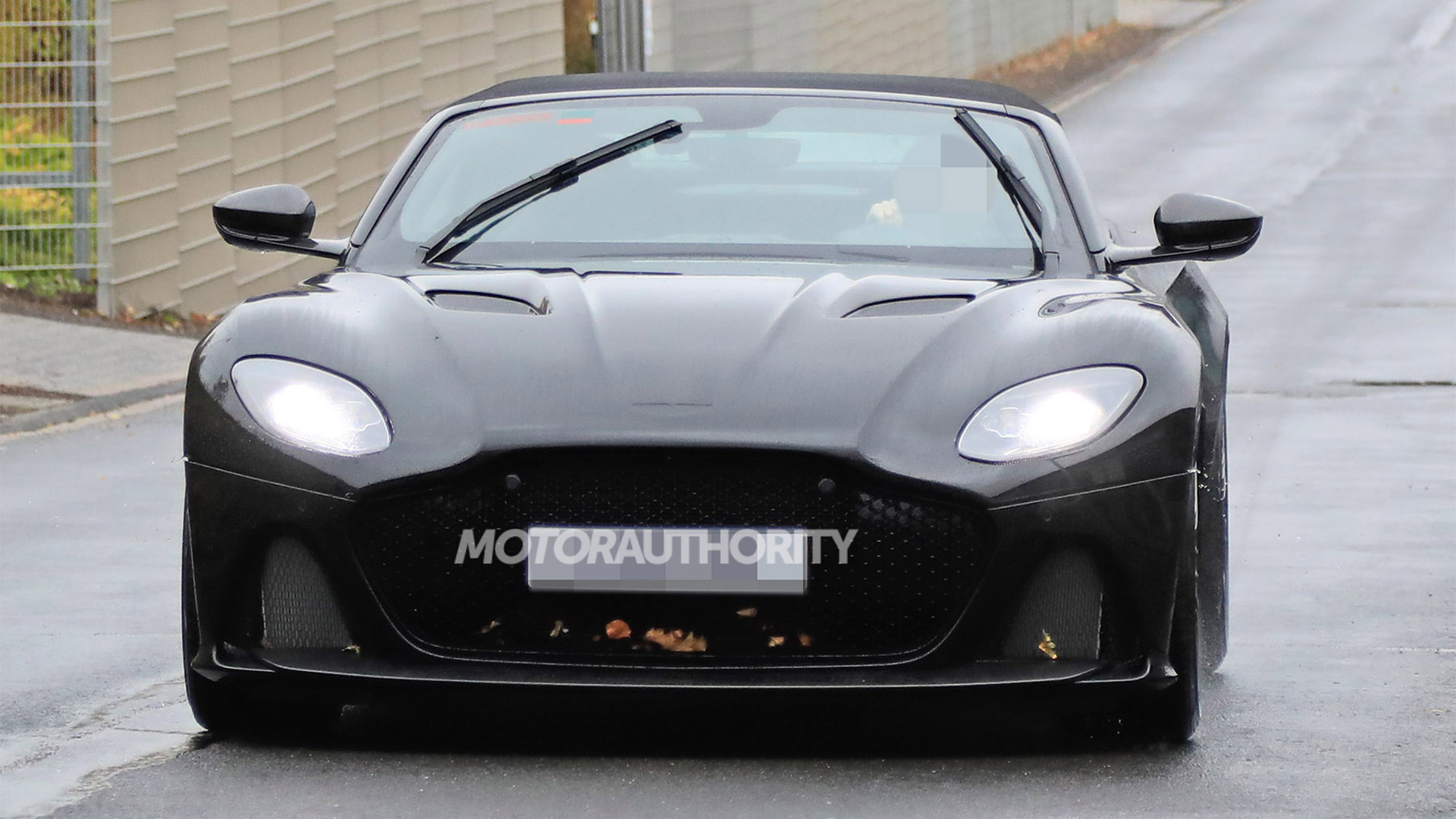 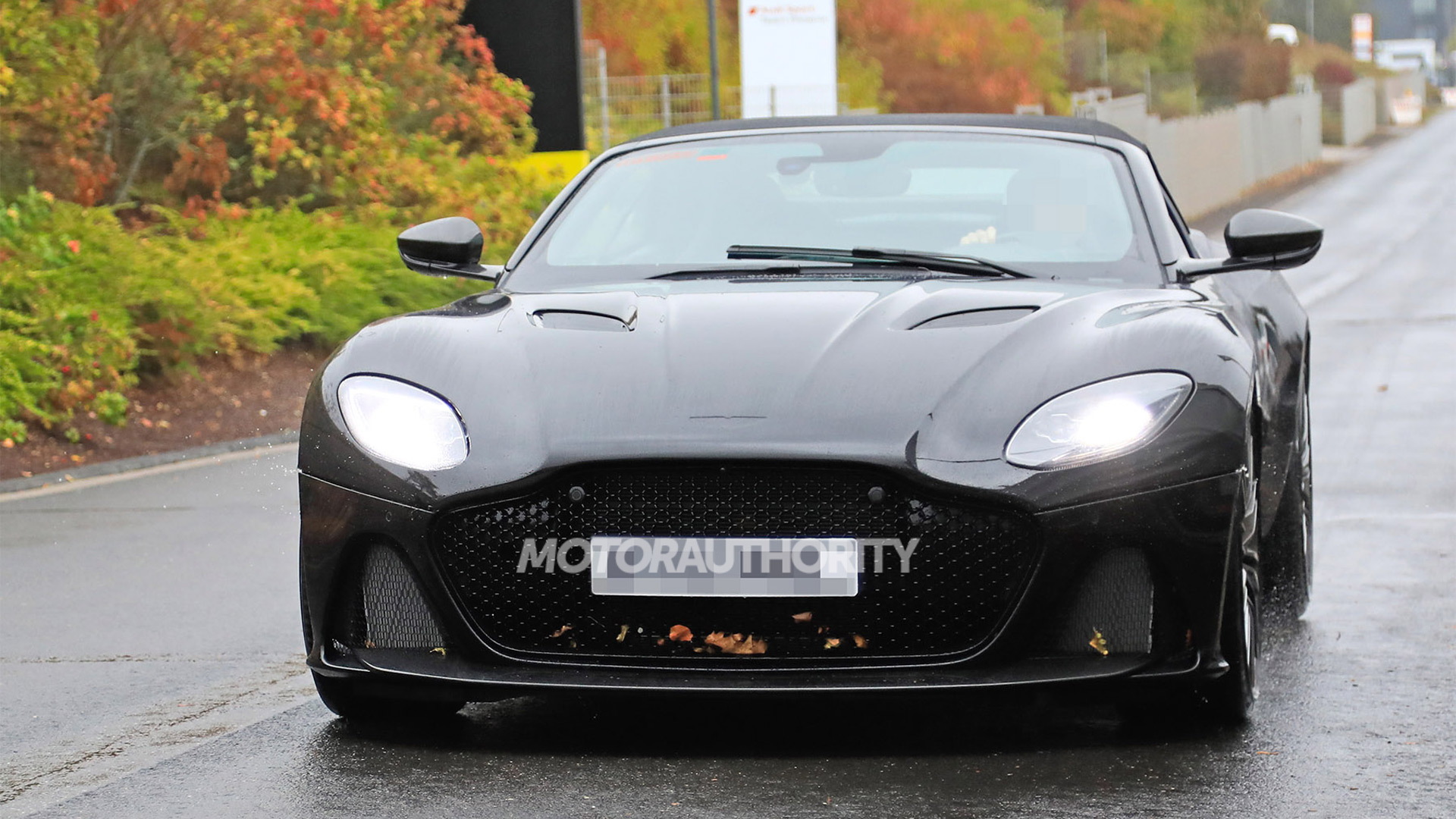 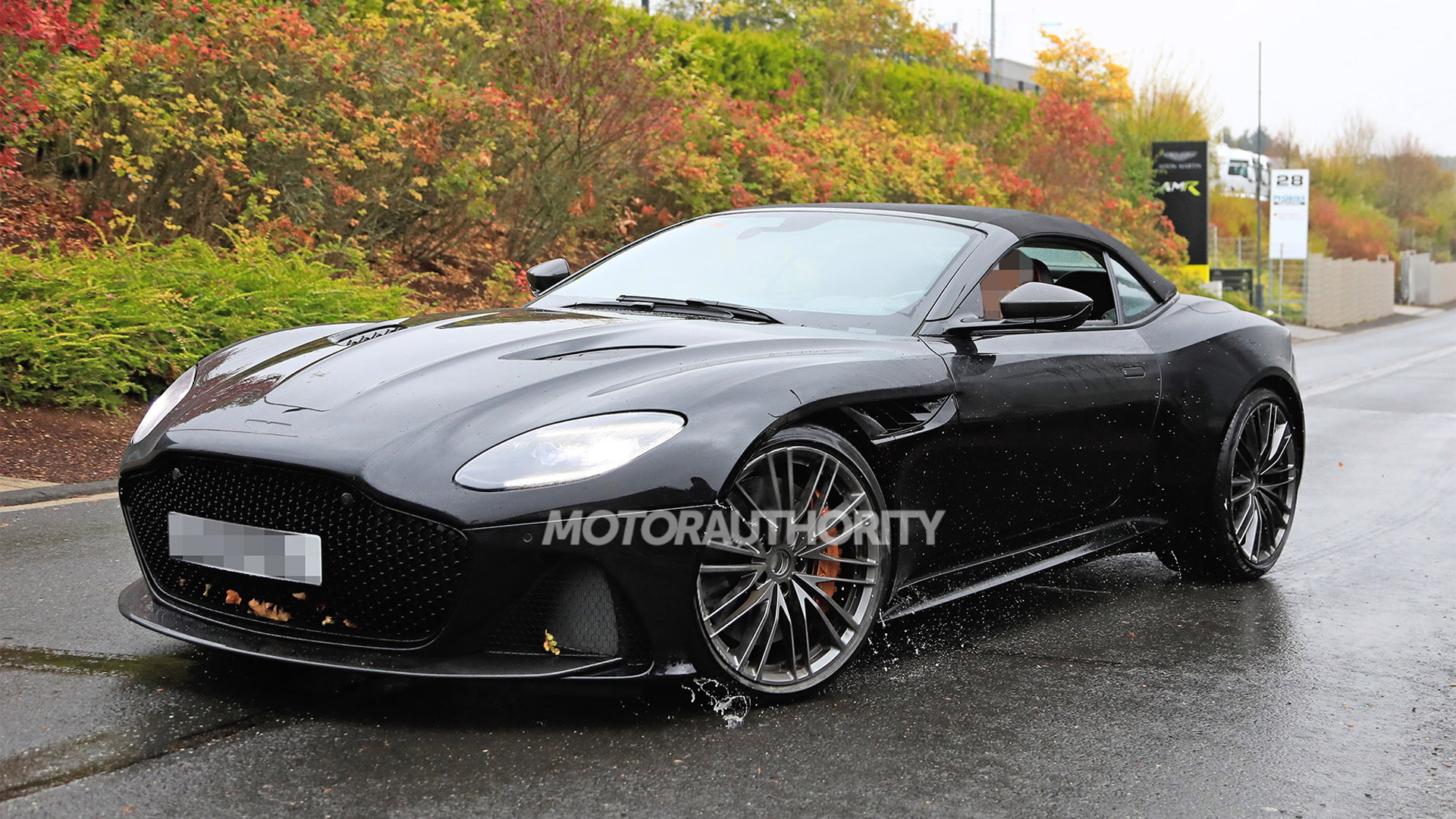 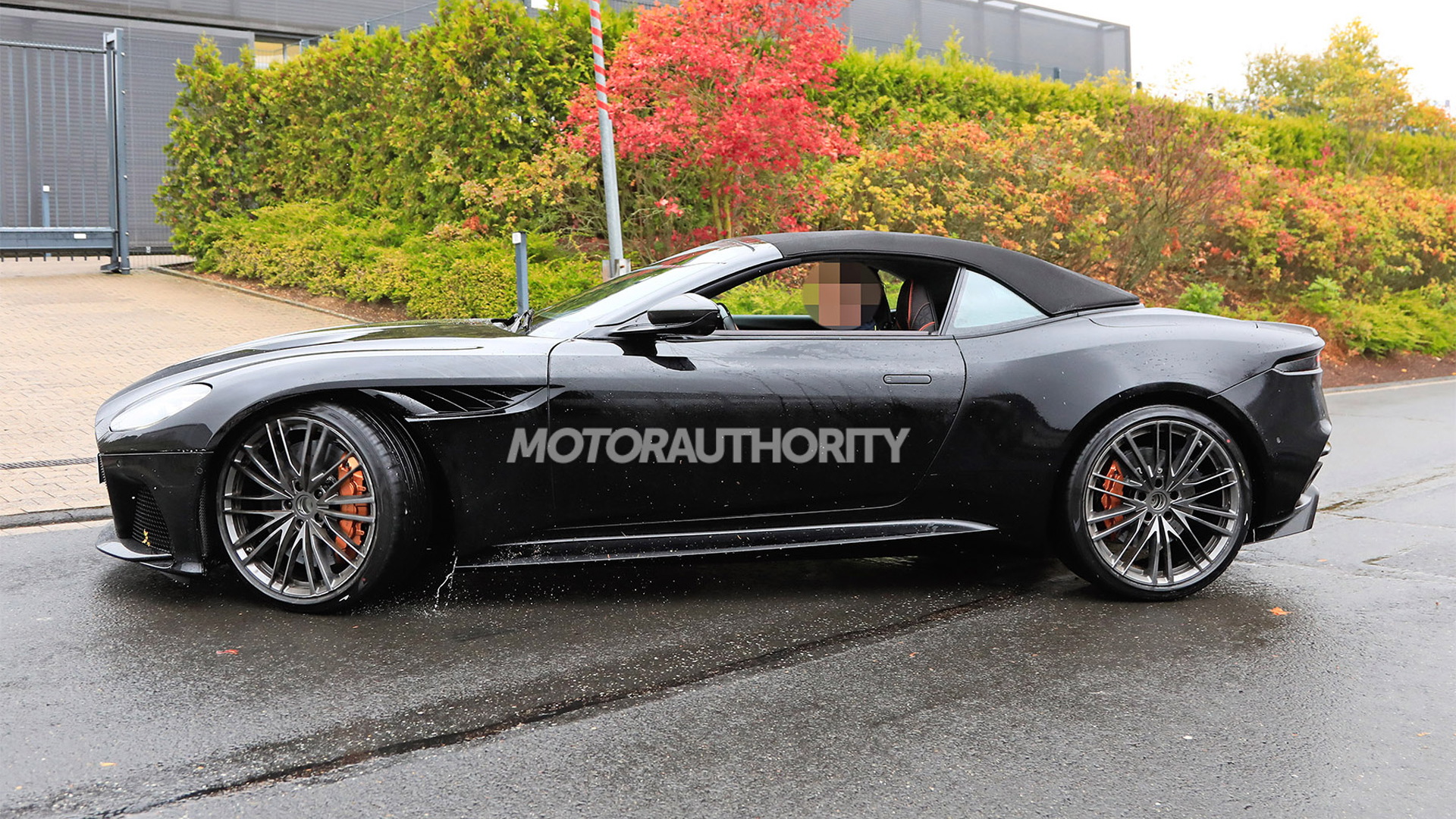 A prototype for the open-top version of Aston Martin's Vanquish-replacing DBS Superleggera has been spotted.

The latest tester was spotted outside Aston Martin's AMR Performance Center at the Nürburgring, and the video below features some footage of the high-speed testing on the German racetrack itself.

To be called a DBS Superleggera Volante, the car closely resembles the DB11 Volante on which it is based though its face is completely different, characterized by a much larger grille and lower vents. The hood is also unique and here too the vents are larger than what you get on the DB11.

Under the hood is Aston Martin's 5.2-liter twin-turbocharged V-12. Peak output in DBS Superleggera spec registers at 715 horsepower and 664 pound-feet of torque. That doesn't quite match the 789 hp of the Ferrari 812 Superfast but we hear a more potent DBS Superleggera AMR is in the works.

Other performance upgrades over the DB11 include track-tuned suspension and massive brakes with carbon-ceramic rotors. Downforce is also up, with the DBS Superleggera coupe turning in peak downforce of 397 pounds, the highest of any Aston Martin road car to date. Expect something similar for the Volante convertible.

And as the Superleggera portion of the name, Italian for “super light,” suggests, the car also benefits from some weight-saving mods, namely all-carbon fiber construction for the body. The core structure is Aston Martin's modular aluminum design that debuted in the DB11.

You'll find all of Aston Martin's usual luxury items inside the DBS Superleggera Volante. Looking at the interior of the coupe, we can expect sports seats lined in leather and Alcantara fitted as standard. The car will also come with a long list of standard equipment including keyless entry, a 360-degree view camera, parking aids, navigation and Wi-Fi.

The DBS Superleggera line is the third of seven models in Aston Martin's Second Century plan, the first two being the DB11 and redesigned Vantage. The next four will be an SUV in 2019, a mid-engine supercar in 2020, a Lagonda electric SUV in 2021 and a Lagonda electric sedan around 2023. Along the way there will also be limited-edition models like the Valkyrie hypercar and electric Rapid-E.

Look for the DBS Superleggera Volante to debut in early 2019 as a 2020 model. And fans of the Vanquish name shouldn't be saddened as Aston Martin isn't retiring it just yet. We'll see it on the mid-engine supercar.