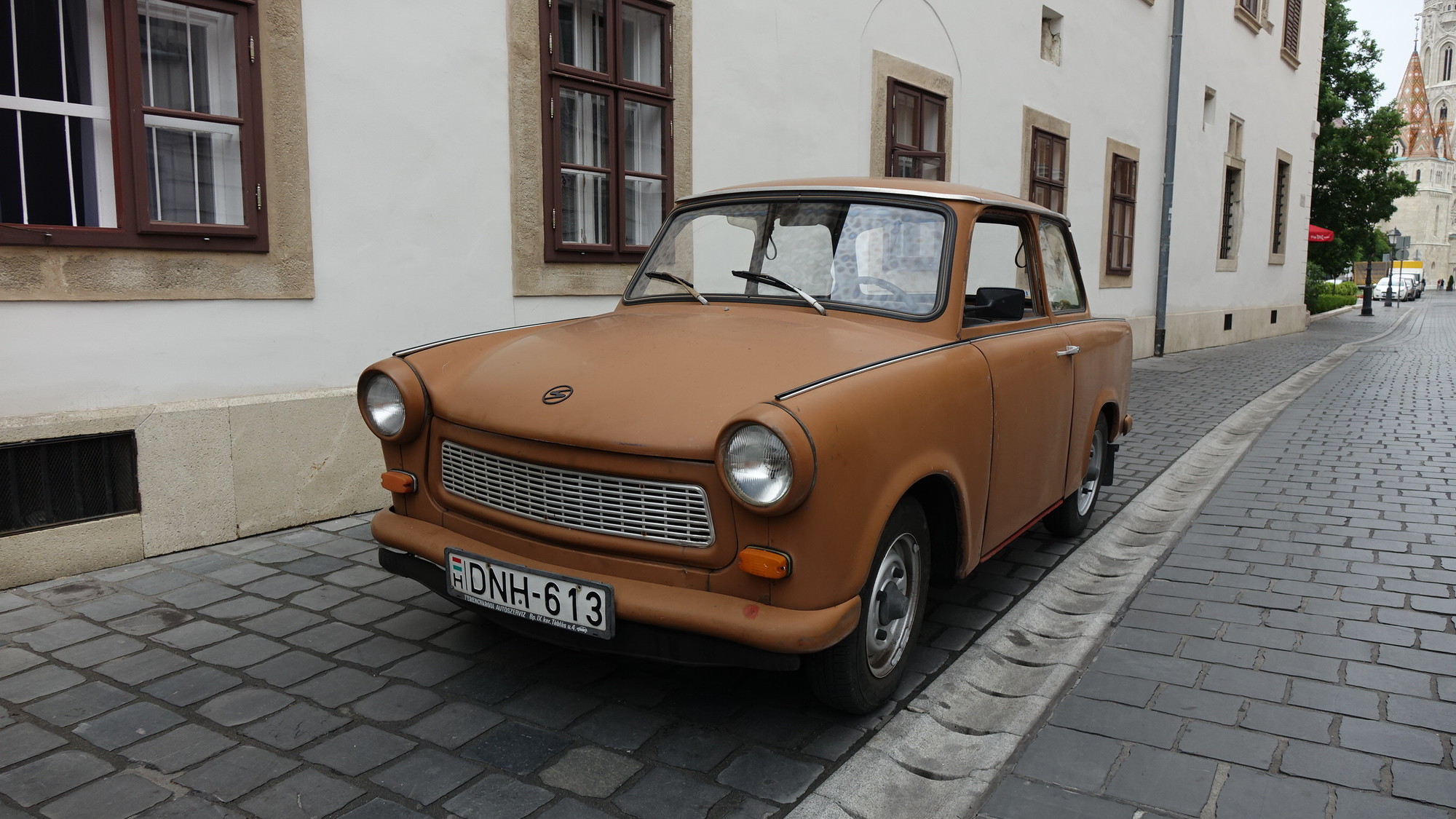 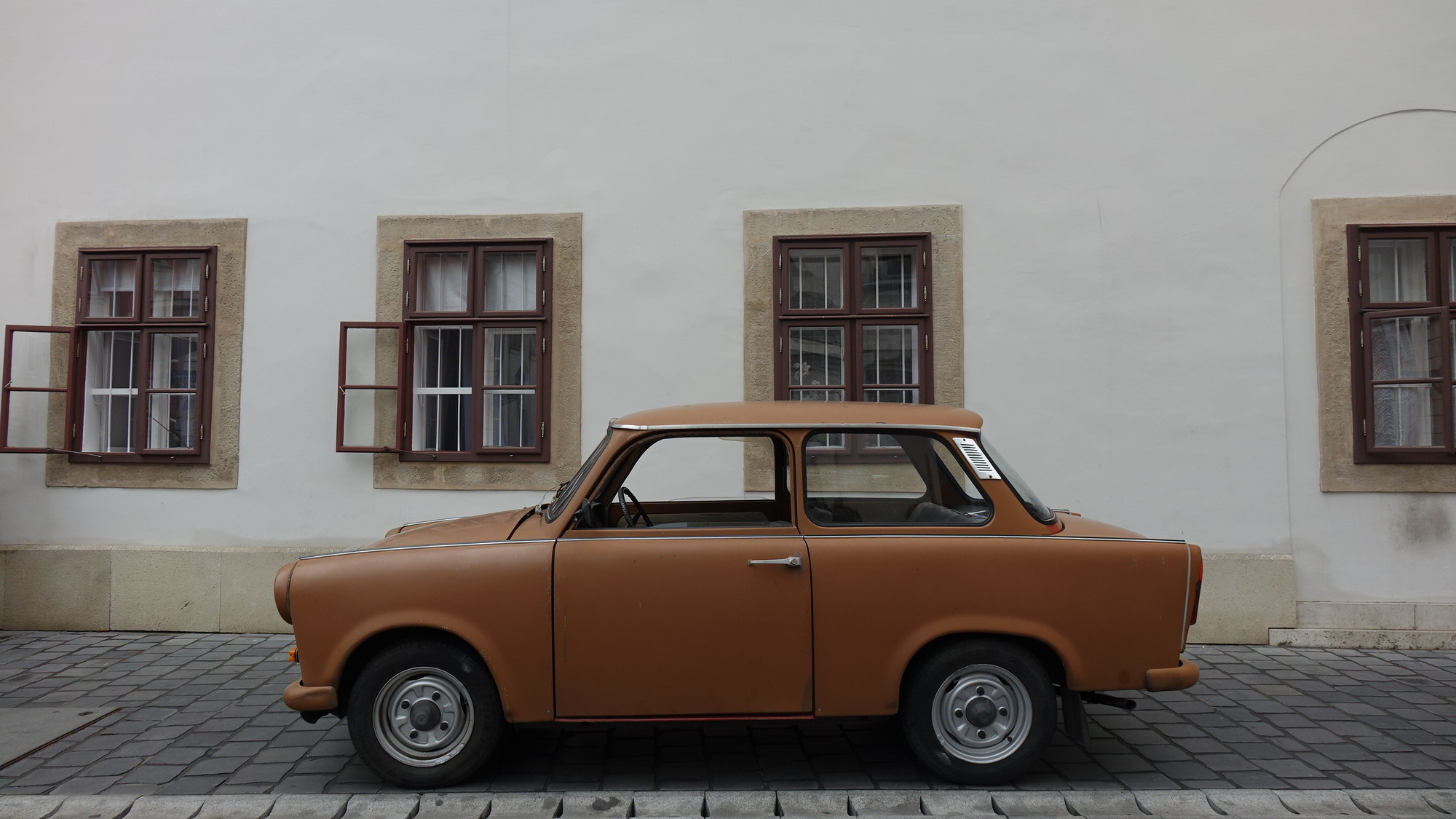 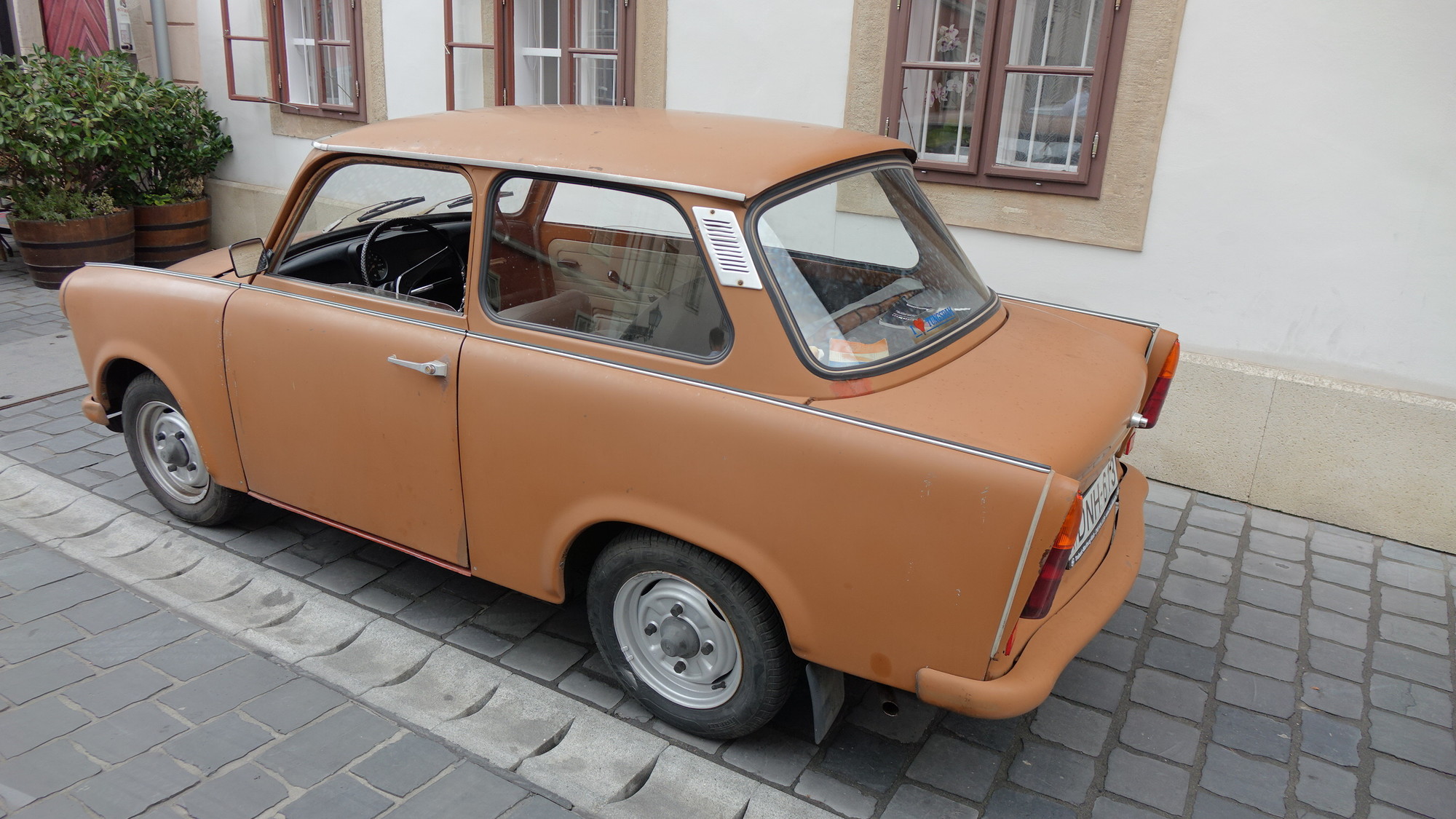 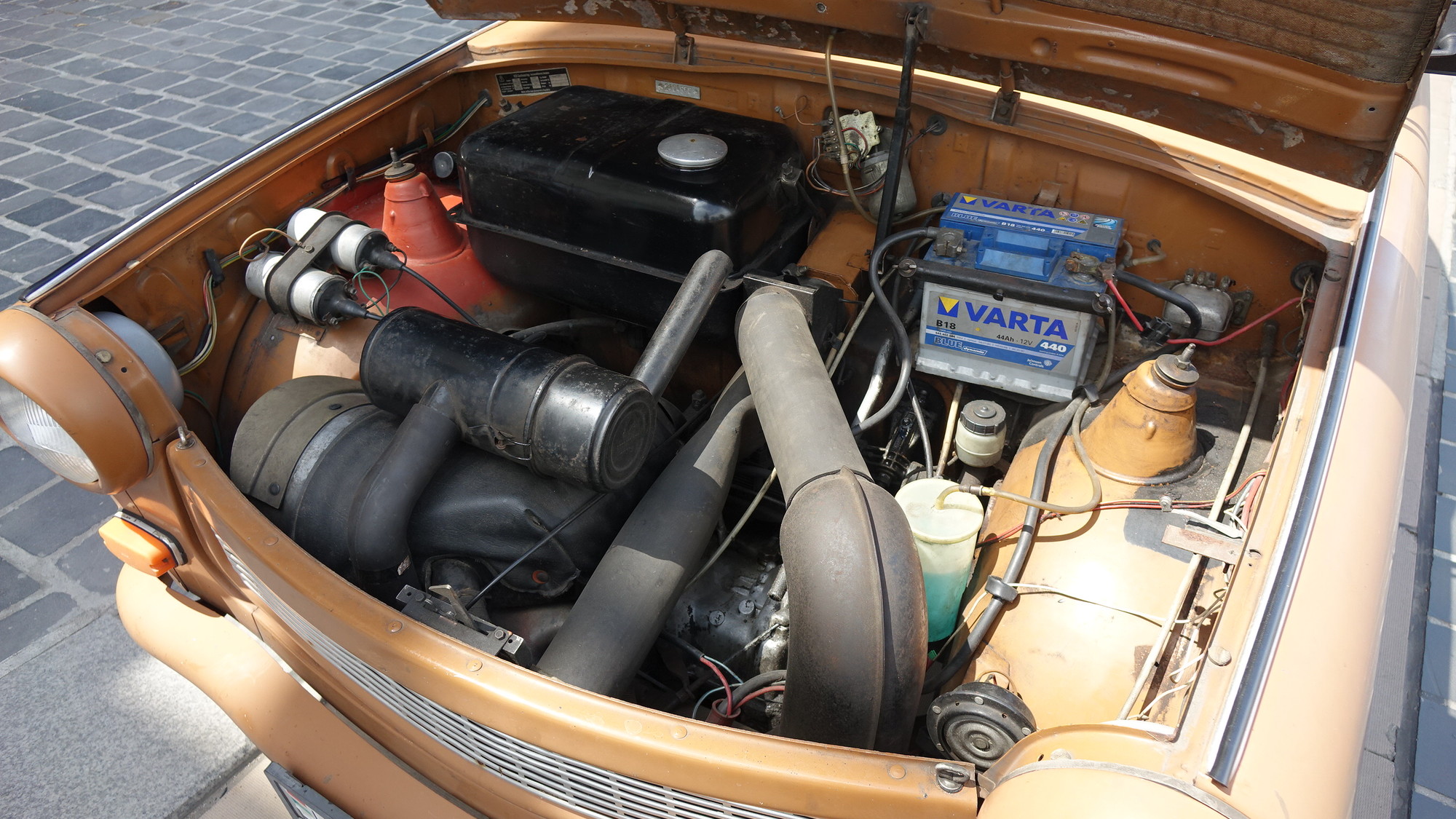 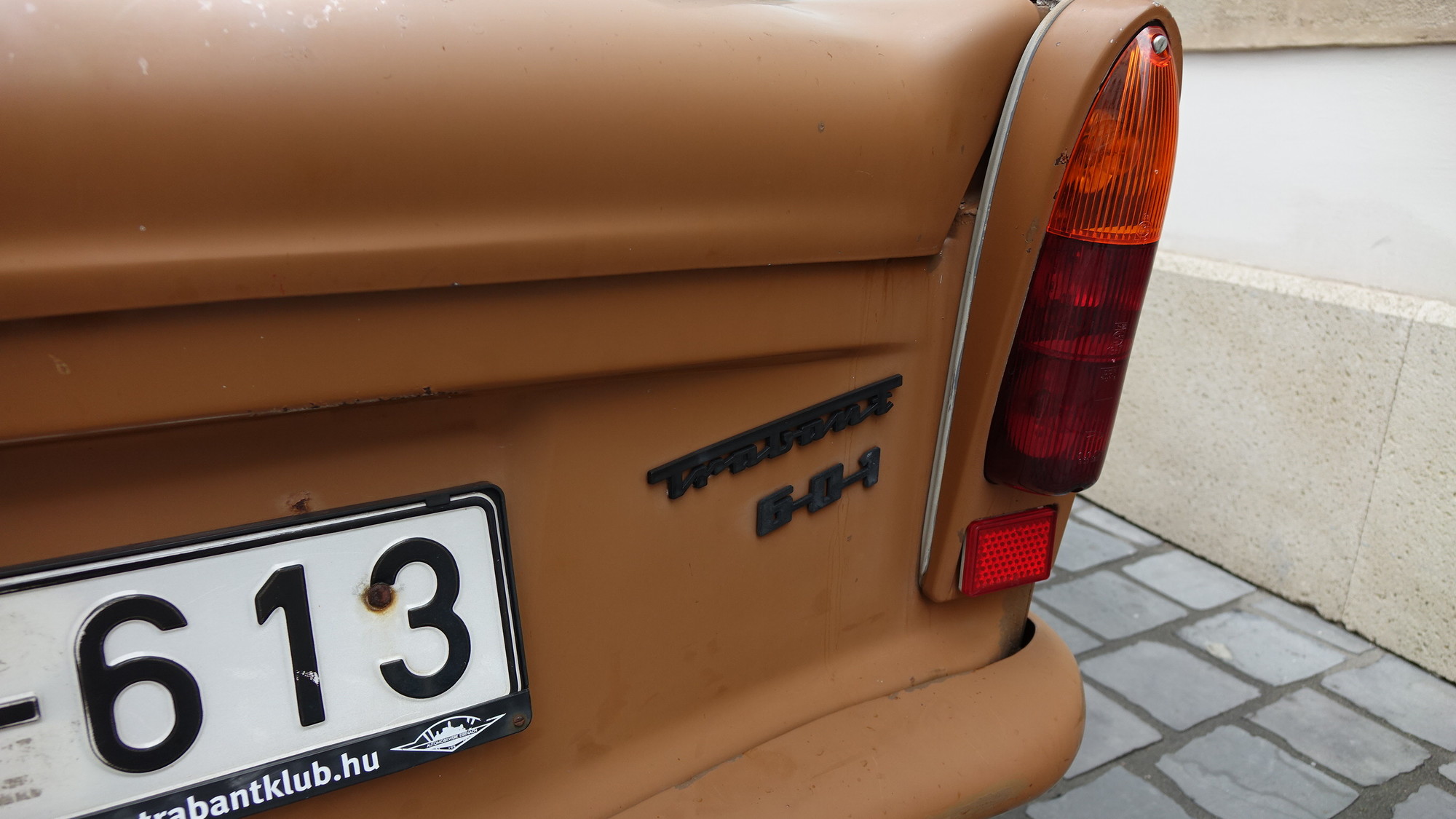 With Lenin, Marx, and Engels literally looking down on us, my fiancée Mindy, a Hungarian taxi driver—whose name I never did catch—and I pushed a dung-brown 1982 Trabant with a dead battery down a hill. After a few feet, it sputtered to life, coughing out a constant stream of blue smoke, a telltale sign that its engine actually had oil in it.

After all, every example of East Germany's proudest communist-era car burned oil from its two-stroke, 2-cylinder engine. It was the most authentically Eastern Bloc moment I'm likely to ever have.

Now worth about as much as a month's rent for a one-bedroom apartment, the Trabant was emblematic of success in 1980s Hungary. Prospective buyers plunked down half the Trabant's value and then waited at least half a decade for theirs to arrive. Buyers didn't even get to pick their color. When theirs was finally built in Zwickau, East Germany, they were ecstatic.

All that wait for what remains one of the worst cars ever built. Assembled for more than 25 years, it slowly put Eastern Europe on wheels. Trabants were designed to soak up the postwar Eastern Bloc's broken roads and they were built with what limited materials the Soviets could scramble together. Their bodies were made of a recycled composite not unlike Bakelite called Duroplast, which meant that they held up well to abuse.

Today, the Trabant (or Trabi, as they're affectionately known) is a relic, but one that delights tourists like myself. While on vacation in Budapest, the ever-gracious Mindy agreed to sit in the back seat of a Trabant 601 while a local tour guide puttered us around town for a few hours. For more than a decade, Rent-a-Trabant Budapest has let curious outsiders get a little taste of the way things were (and the way they smelled).

A great way to see Budapest

As we learned, there's not a more fun way to see Budapest than from the unsupportive seats of the world's worst car.

Our tour guide, Judit, picked us up at our hotel in Budapest's ultra-touristy old town area—ravaged by the Soviets during World War II but restored to an almost Disney-perfect charm today—on a sunny June morning. We hopped aboard and found remarkably good interior space for a car two feet shorter than a Hyundai Accent. Over cobblestone roads, the Trabi's leaf-sprung suspension and tall sidewalls provided a comfortable ride. But there was no escaping the clatter underhood, which reverberated off of every surface. Tourists swung around to look at every opportunity and Judit delighted in honking the little Trabi's meek horn.

Judit drove us to Memento Park, a scruffy collection of Eastern Bloc monuments that once loomed darkly over Budapest until they were removed in the early days of Hungarian independence. Today, these artistic representations of Soviet and Hungarian leaders are almost cartoonish; they don't draw the disdain they once did, but they are far from majestic. Memento Park isn't easily accessible by public transportation, so we were happy that Judit lugged us there in her Trabant.

On the way to Memento Park, Judit told us about how her family waited more than five years for their Trabant, which was delivered in the early 1980s. It opened up a whole new world by putting them on wheels. Theirs was blue, not that they had a choice. When Hungary officially opened its doors to the rest of the world in 1989, Trabants were a symbol of oppression. Most were discarded, once their now-privatized maker figured out how to dispose of their bodies (they were chewed up and re-purposed as an ingredient used in concrete).

Professional guide Judit stumbled across her Beaver Brown example a few years ago. With around $1,000 invested, she has a reliable, comfortable, and authentic example of a car now kitschy enough to attract paying tourists. And, if you're lucky, she'll even let you drive it.

I got to drive it

East Germany may have been cut off from the Western world shortly after the Soviets took hold of the country, but by then carmaking basics were universal. The Trabant immediately felt comfortable to me. It's a small car, but it feels wide enough inside for two adults to sit abreast. Visibility out is excellent thanks to the narrow roof pillars and short dashboard. Only the column-mounted 4-speed manual gearbox took a little acclimation.

But before I could drive the Trabi, we had to resuscitate it. Judit had accidentally left its lights on—a buzzer to remind you would be too capitalistic, after all. Unladen, a Trabant weighs only around 1,200 pounds thanks in part to its Duroplast body. Judit said that she, like anyone else who had lived in communist Hungary, had plenty of experience pushing Trabis. The middle-aged taxi driver who abandoned his Volkswagen van to help us also seemed rather nonplussed about the experience.

Thirty years ago, this would have been just another day. Communism's heroes watching four adults try to start a car so subpar that it is completely dead after its lights are left on for an hour.

But once the Trabi fired up and exterminated all of the mosquitoes within a half mile radius with its puffing exhaust, Judit motioned for me to hop into the driver's seat.

The Trabi's driving experience is best described as agricultural. It absorbs road imperfections fairly well, but its steering is akin to sticking a spoon in a bowl of rocks and yogurt (not that I ever have). There's nothing technically wrong with the way it steers, but the experience is numb, imprecise, and not exactly consistent. I found myself correcting the steering angle constantly through sweeping corners. On the other hand, the Trabi's brakes were surprisingly strong, even when a newer, decadent Mercedes cut us off mid-corner on a curvy road.

I put about 20 kilometers on the Trabi from Memento Park back to central Budapest and I was in heaven. Glorious, oil-stinky heaven. Mindy, tucked into the tight back seat with the sun beaming down through the rear window, perhaps not so much. But she had a second-row view of my giggling, goofy self. You may hear rumors that there's a video of my giddiness, but for now that remains merely conjecture.

Our journey in the Trabant past creaky, Soviet Bloc apartments on the outskirts of Hungary's capital back to its restored old town was a delight. As we approached the city limits, those winding two lane roads gave way to modern boulevards. That's when I began to realize just how small the Trabant—all 132 inches of it—actually is. Modern Volkswagen Tiguans towered over us, their occupants smugly beholding wide-eyed tourists in a poop-brown cartoonish car belching blue smoke.

Enough time has passed that now the Trabant is a kitschy memory—at least for most.

Approaching Budapest, a faded blue Skoda zipped past us. Pointing at this dreadful, but slightly more modern car, I asked Judit just who would want to drive a vehicle only marginally better than a Trabi today when there are plenty of other choices.

"People really nostalgic for the past," she said, emphasizing the word "really" and rolling her eyes.

For me, half an hour behind the wheel of arguably the world's worst car was just enough, a wonderful glimpse into an era and a place I simply cannot fathom. Budapest is a city that has emerged from its darkest days full of life and vitality, something those once deified, now despised leaders watching from Memento Park couldn't imagine, either.