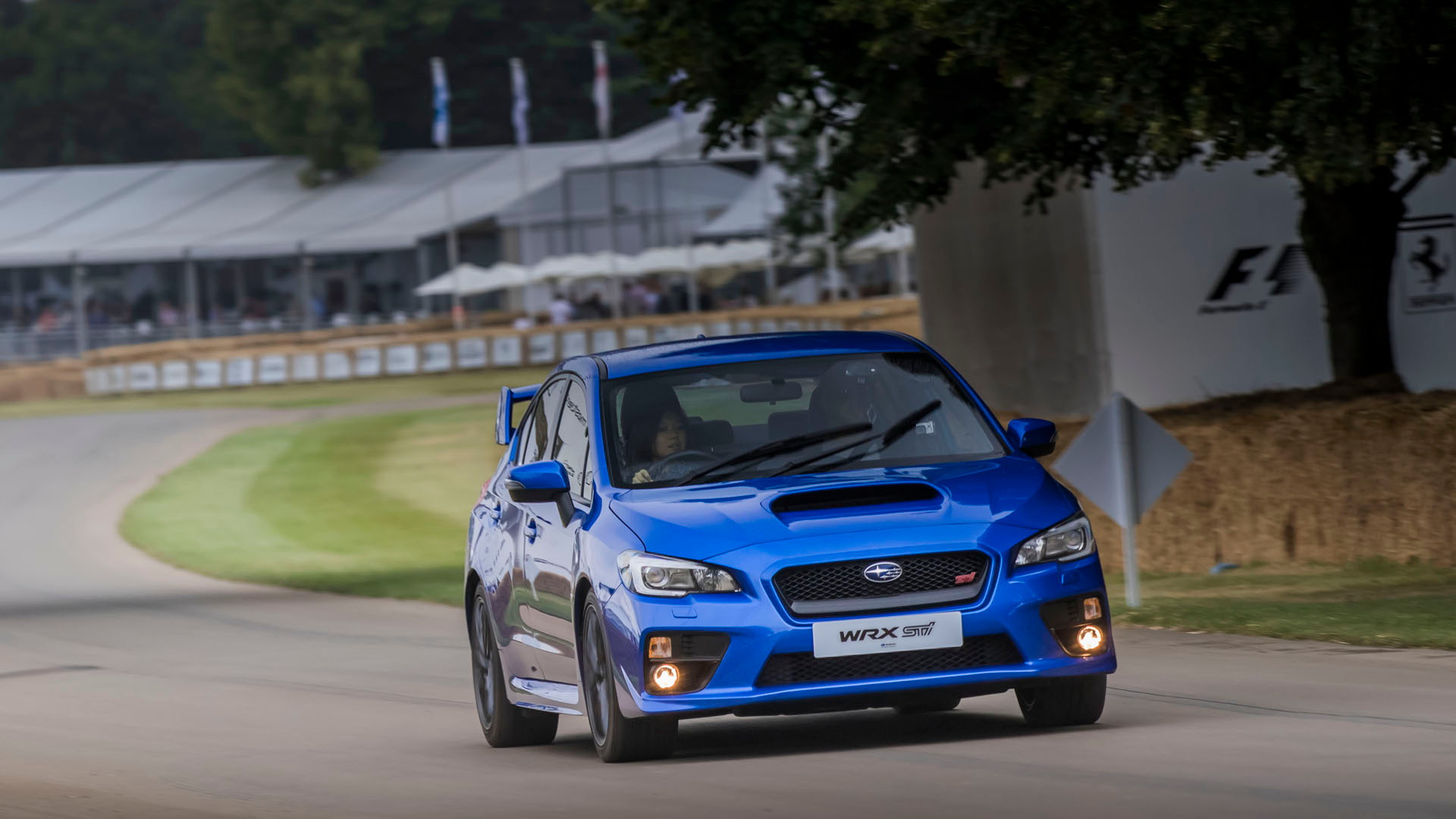 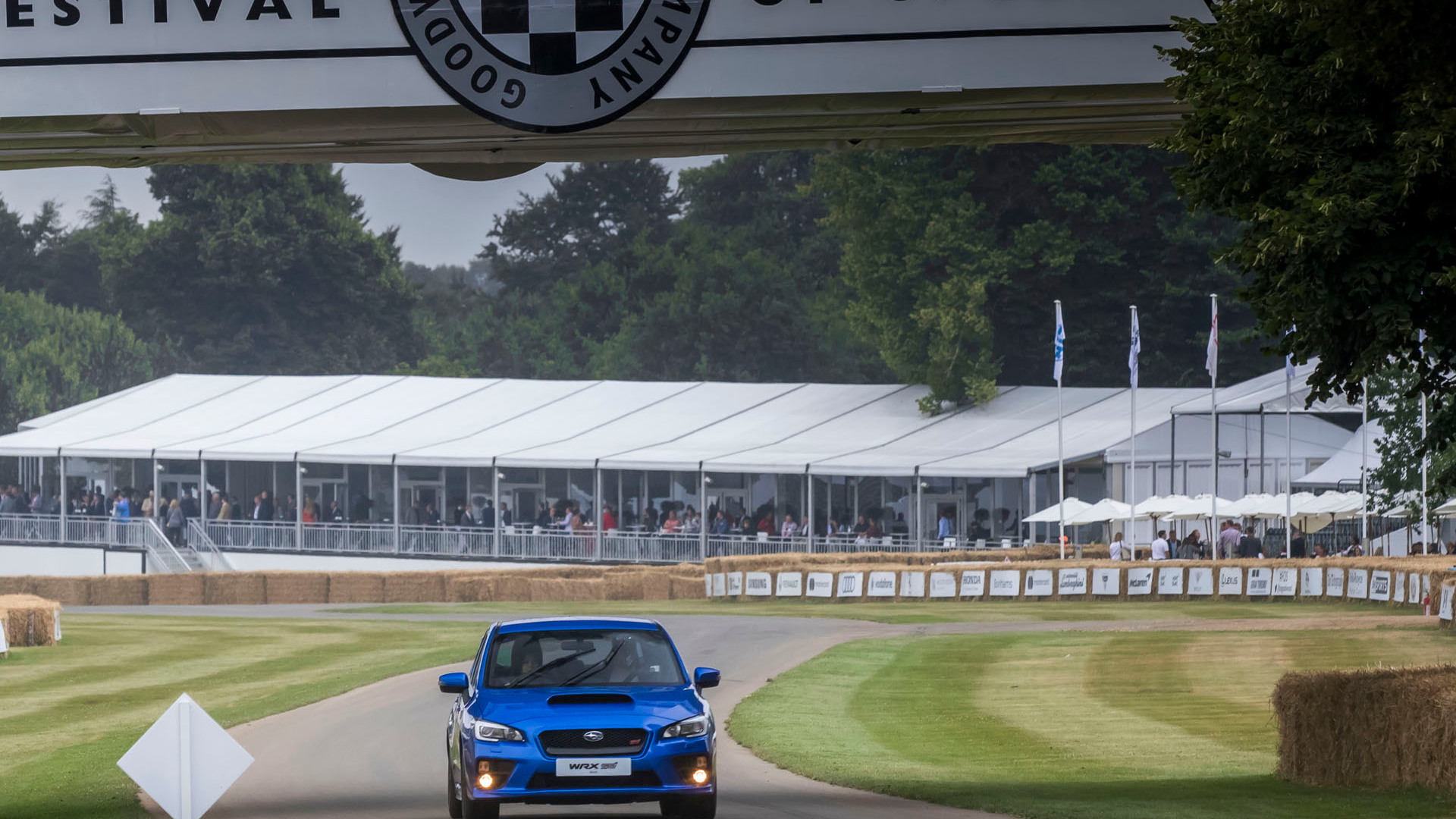 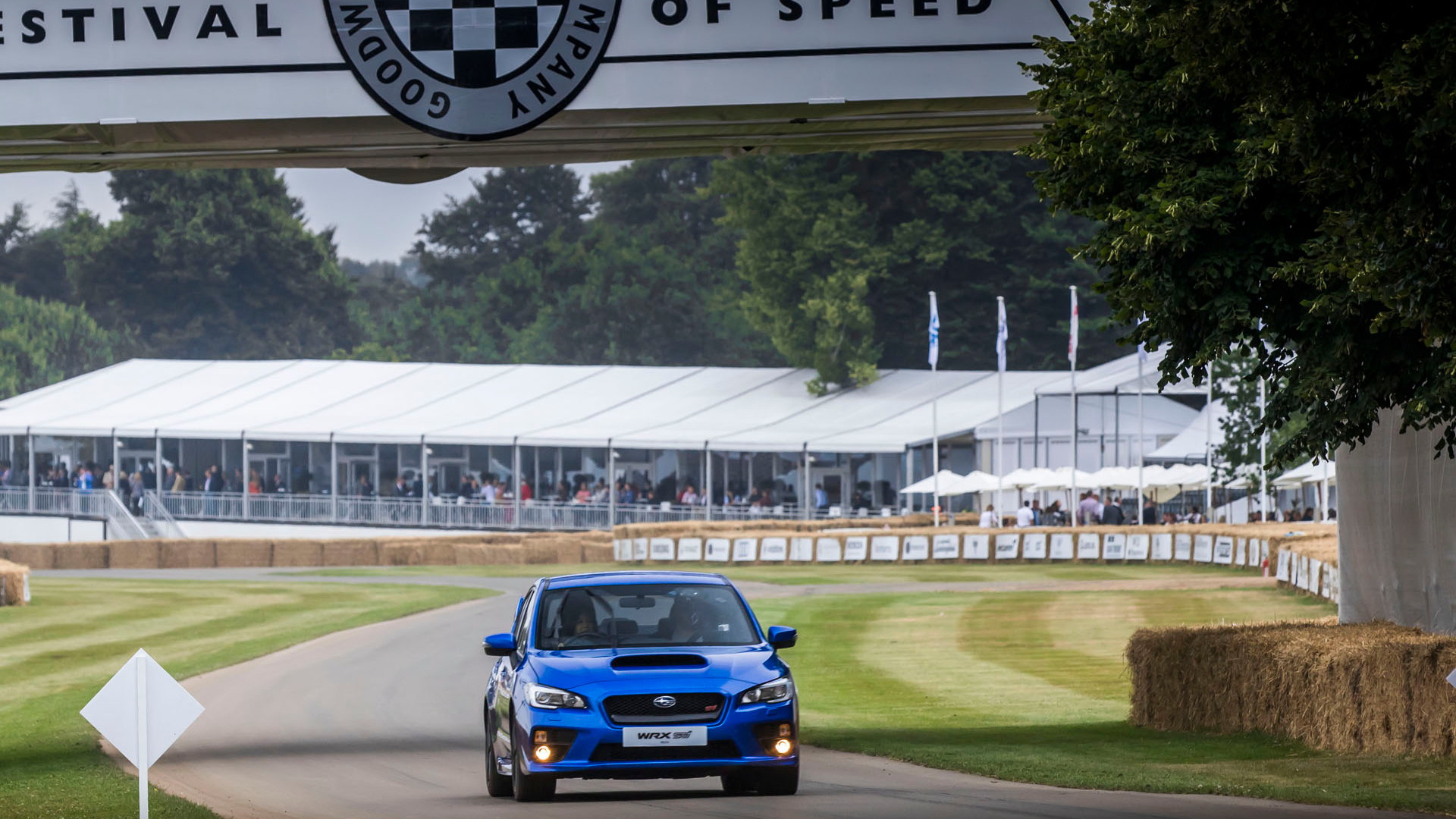 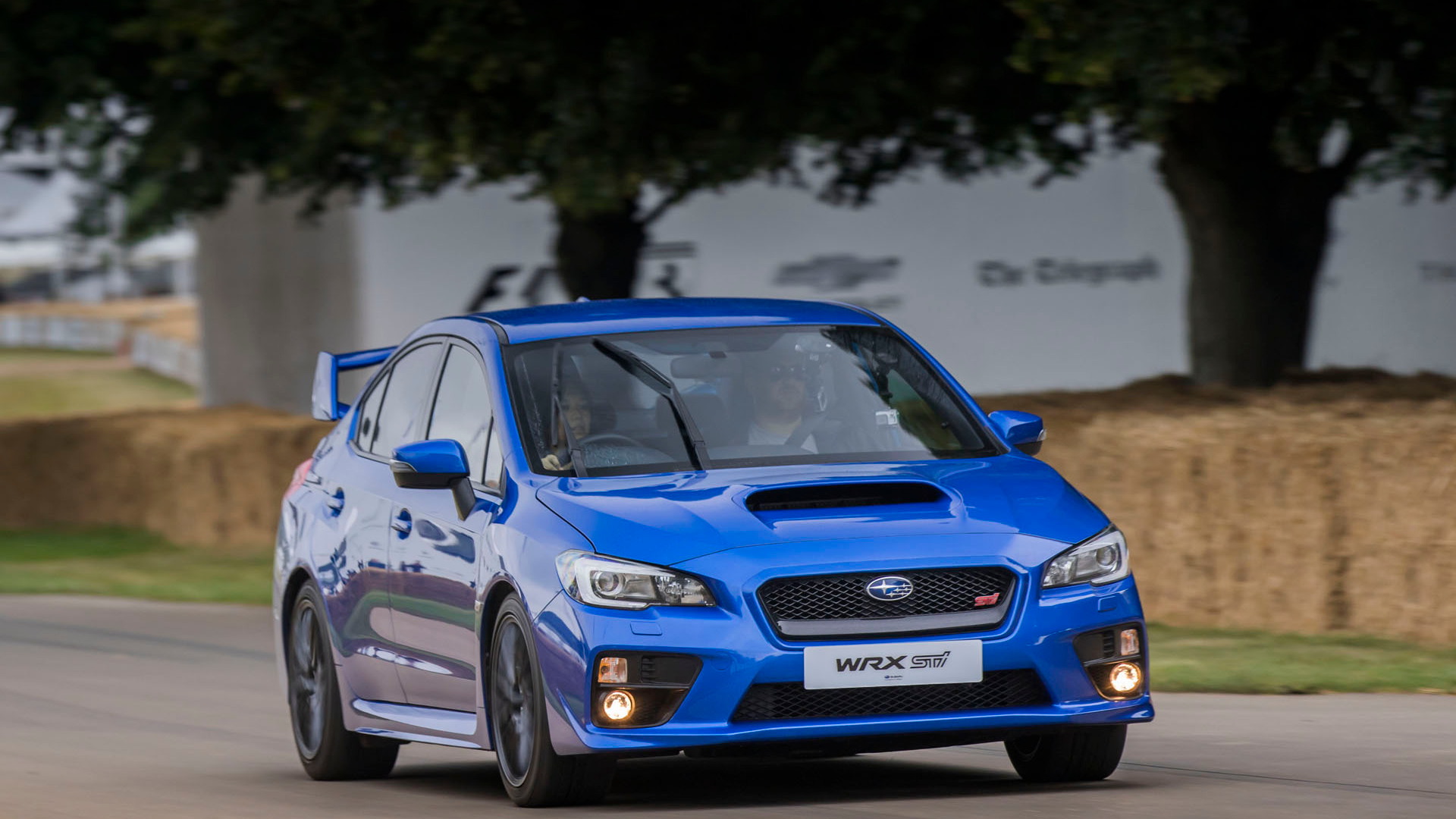 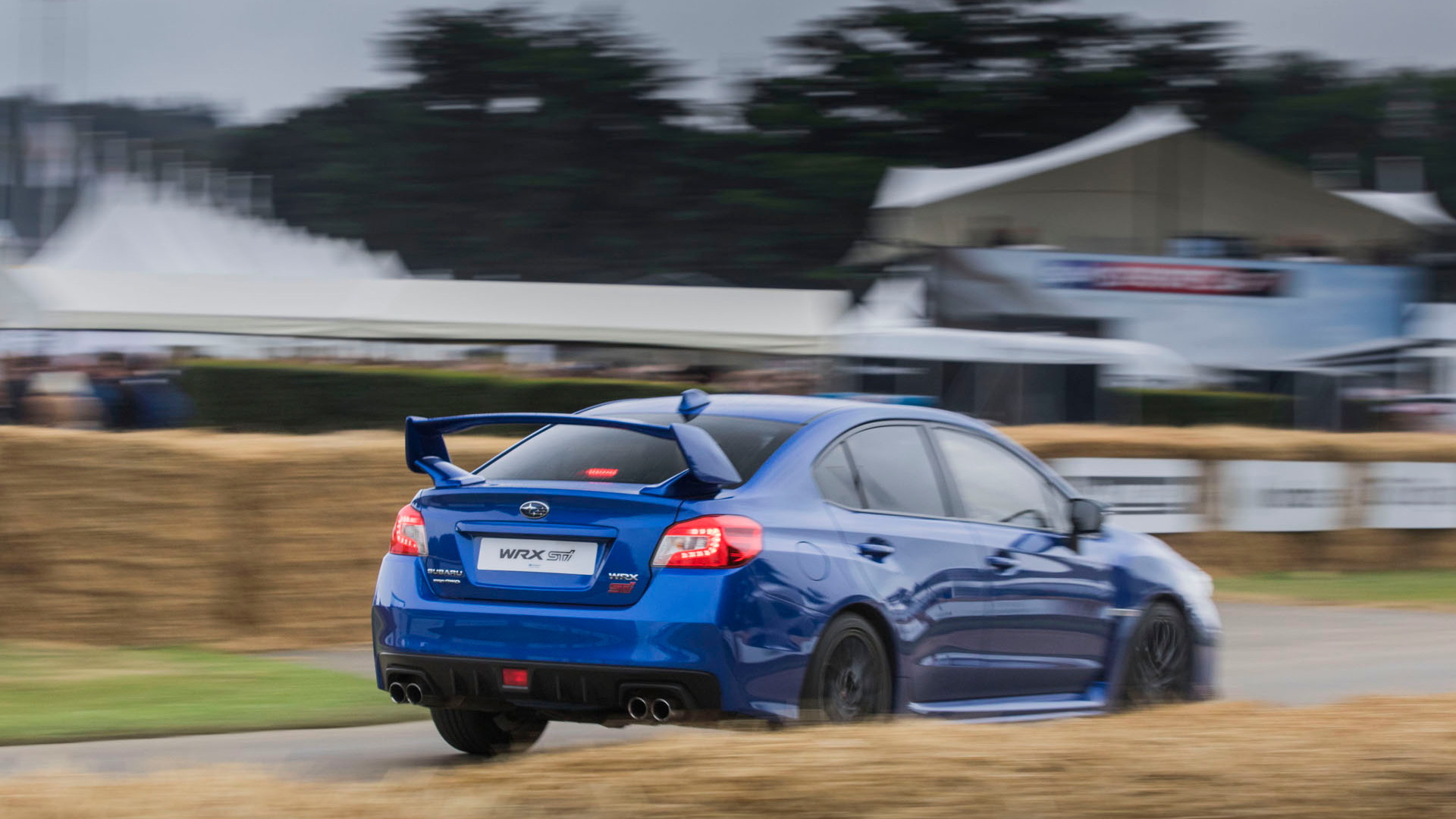 Automotive public relations is a funny profession. As a young writer, my editor told me ahead of my first media program to never say anything that could be construed as a request for something, even in passing, because PR people take it seriously. I apparently forgot that lesson, and ended up sitting behind the wheel of a right-hand-drive Subaru WRX STI preparing to run the hill as part of the 2017 Goodwood Festival of Speed because of it. Whoops.

This, of course, was not a bad thing. In fact, the whole “run the hill at Goodwood” part was planned from the beginning. It was my own big mouth that was responsible for the right-hand-drive STI.

Subaru really wanted the media to see it try to win the Festival of Speed's timed shootout with Manx lunatic Mark Higgins and a heavily modified WRX STI, so it offered to fly me to a mossy island in the North Sea for a once-in-a-lifetime chance to drive a WRX STI in the Goodwood Festival of Speed's Moving Motor Show, a rolling showcase of production machines driven briskly up the hill on the festival's first day.

Subaru's fantastic PR team said the cars were the same U.S.-market vehicles the company had been using to lap the Isle of Mann for years. Then we got there, and I was told there was a right-hand drive model for me and a partner, because I had opened my big, dumb mouth (Subaru didn't actually say that last part).

My only real experience with right-hand drive was in an underpowered Mazda Axela and a classic Mini Cooper. My World Rally Blue WRX STI was unlike either of those, with 306 horsepower and 290 pound-feet of torque from its 2.5-liter, turbocharged flat-4. Paired with a 6-speed manual transmission and Subaru's trademark Symmetrical All-Wheel Drive, it's not a vehicle for the faint-hearted or unfamiliar. And considering the situation, I was both.

So let me paint the picture. I suddenly found myself sitting on the wrong side of a car I didn't own, preparing to run a track I'd never driven, shifting with the wrong hand, in front of thousands of spectators, in the sort of light drizzle (because England) that's known for making tracks greasy. It struck me as mildly absurd. It was also awesome.

For most car enthusiasts, Goodwood in any capacity—be it the Festival of Speed or September's Goodwood Revival—is a pilgrimage of the first order. Being allowed to drive the hill, though, is a borderline religious experience for car enthusiasts.

Lord March's driveway is lengthy for what it is, at 1.16 miles, but driving that distance at speed doesn't take a long—the fastest recorded time over the weekend was in the 46-second range. My time was going to be much, much slower.

After being introduced to my right-hand-drive World Rally Blue STI, I spent what felt like a year consumed with nerves, partially because of the whole right-hand-drive thing, but largely because this was Goodwood. That fact kept running through my head as the procession of production cars in the Moving Motor Show crept towards the marshals at the starting line.

I probably aged a year in the 15 minutes it took to reach the starting line behind a procession of production cars in my World Rally Blue STI, and as the marshal raised his hand to stop me, I quickly muttered astronaut Alan Shepard's infamous prayer—“Please, dear God, don't let me fuck up.”

A run up the world's most famous driveway

Then the marshal dropped his hand and I was off on a jerky, novice-like launch. A set of jelly legs and a clutch that was nearing the end of its life combined for an embarrassing takeoff, but I quickly recovered and was shocked at how normal everything felt. Tunnel vision took over, and this was just another track that needed navigating, not the world's most famous driveway. And right-hand drive? It felt like one of my countless right-hand-drive laps in “Forza Motorsport.” Thanks cockpit view!

From the start, the first corner—a right-hander—comes up quickly. Neither it nor the gentle right that comes shortly after it are particularly tricky, but the track is narrow from start to finish, so there's not much room for error. The pro drivers clipped the second turn, before hitting the Park Straight. Fearing the tires were in the same shape as the clutch and concerned about the sprinkles, I took a far more conservative line by completely missing the apex.

Park Straight cuts through the most heavily populated part of the grounds, and is the first indication that Goodwood is all about straight-line speed. It's a big part of why Subaru's heavily modified STI lost out on the timed shootout prize to the much lighter, much more powerful Group C prototype and Penske CART racer.

Unbeknownst to me and my fellow media drivers, the marshals effectively split the Park Straight with a hay-bale chicane. The idea was to keep Moving Motor Show cars from carrying too much speed into the complex Molecomb Corner at the end of the straight. Smart, that.

Molecomb is a deceptively vicious turn and was the site of most of the drama during the Festival. Later that weekend, the bend claimed a Ford RS200 and a Ferrari 488 GT2. After driving it myself, it's not difficult to understand why.

After carrying speed down the Park Straight, Molecomb claims its victims in one of two ways. In the Ferrari's case trail braking seemed to catch it, sending the tail into the barrier. At the same time, the track drops away ever so slightly—carry too much speed and you'll understeer into the welcoming arms of the hay bales. I avoided the hay bales because my self-preservation instinct kept me from going fast enough to induce understeer.

CHECK OUT: Top 11 ways up Lord March's driveway at the Goodwood Festival of Speed

After successfully negotiating Molecomb, I climbed along a short straightaway before entering what felt like a tunnel of trees. Goodwood's infamous wall sprung up on the left side, just ahead of a chicane, and along with the trees helped blot out what little light England allows to reach the ground. This felt like the tightest, most claustrophobic part of a tight, claustrophobic track because there's truly nowhere to go.

The entire section came up suddenly, and was easy enough to navigate at the speeds my World Rally Blue STI was traveling. For drivers of faster machines, though, I'm sure there was some puckering when the wall arrived.

Like turns one and two, the chicane opens to a straightaway and demands maximum speed. There are a few gentle turns after the wall, but the could STI handle them without lifting. I wasn't about to try it, though, braking cautiously and reveling in the few, adventurous rev-matched downshifts my left hand attempted. After the last two turns, the final straightaway stretches toward the finish line.

The pro drivers carry on up the course to an upper paddock near the Forest Rally stage before parading back down the hill to cheers and waves. I was diverted off to a main road back to the bottom of the hill. I'd like to think this was the only sign that I wasn't worthy of Goodwood's glory, but the reality is that my overcautious run on the wrong side of the car was a far cry from the real drivers I saw later that weekend, including Subaru's Mark Higgins, who ran up the hill with abandon.

Nonetheless, as an introduction to the Goodwood Festival of Speed, a quick run up the hill is difficult to beat. Next time, though, I'll do it on the right—and by that I mean left—side of the car.

Subaru provided travel and lodging to Internet Brands Automotive to bring you this report.