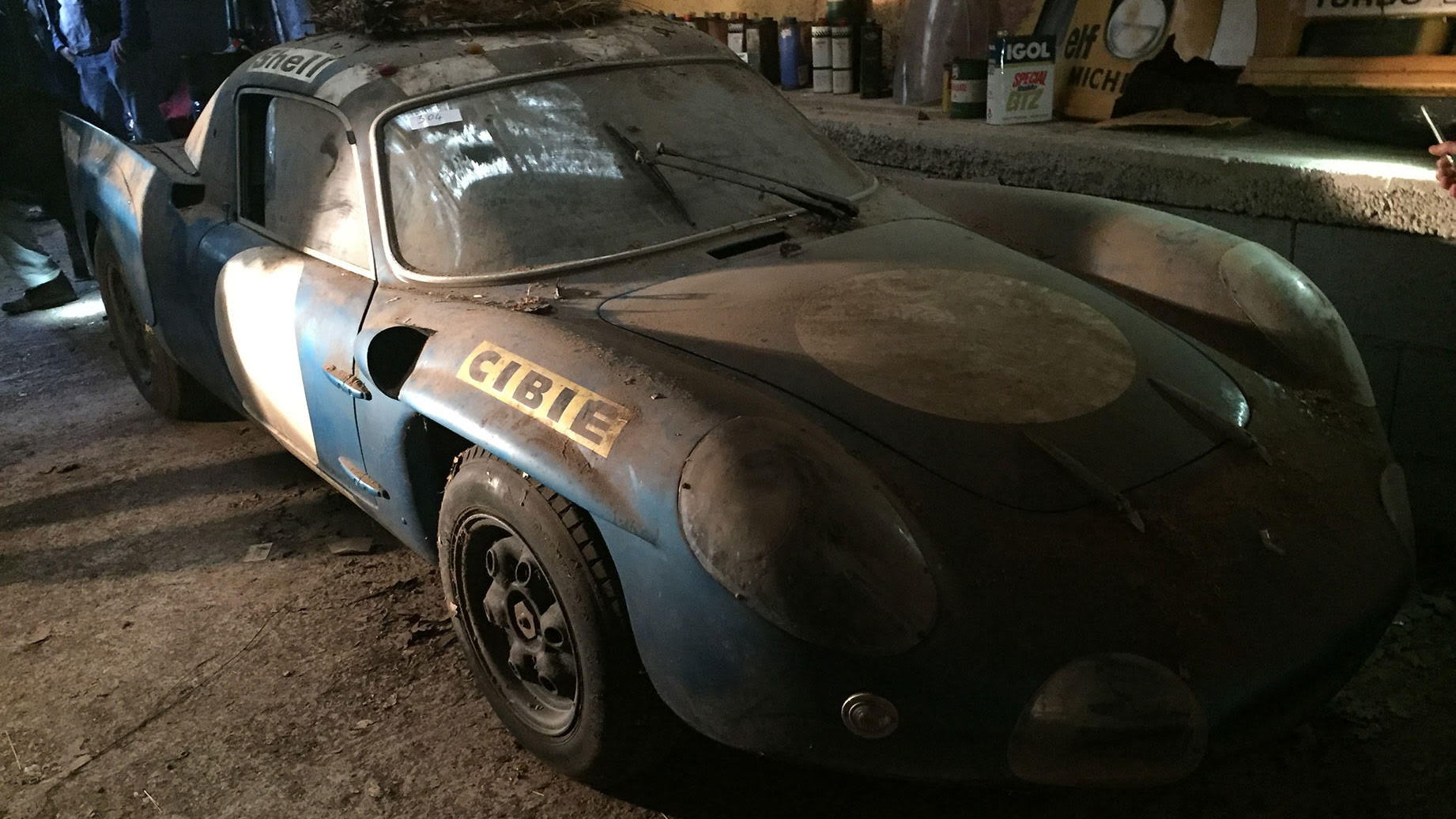 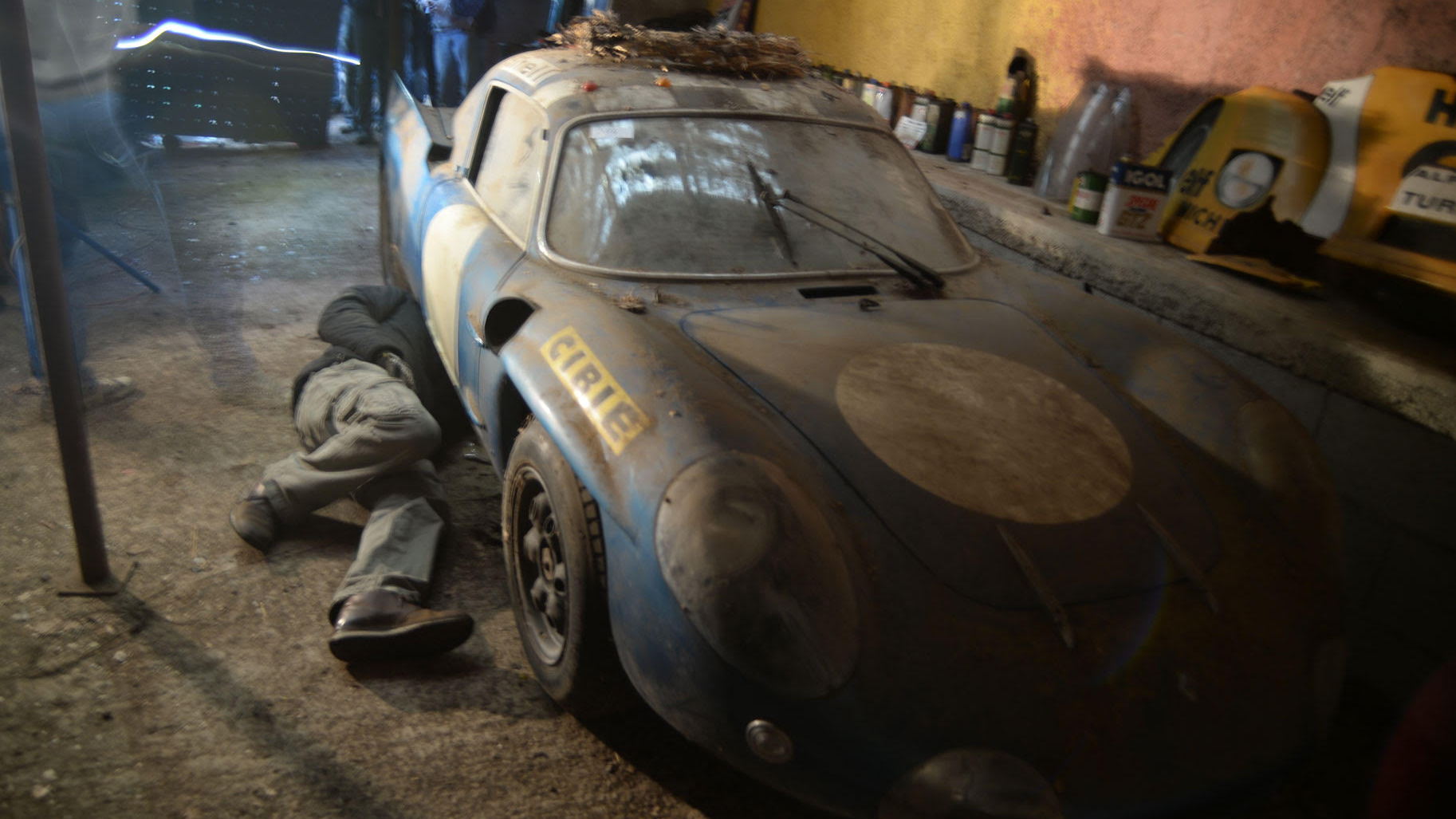 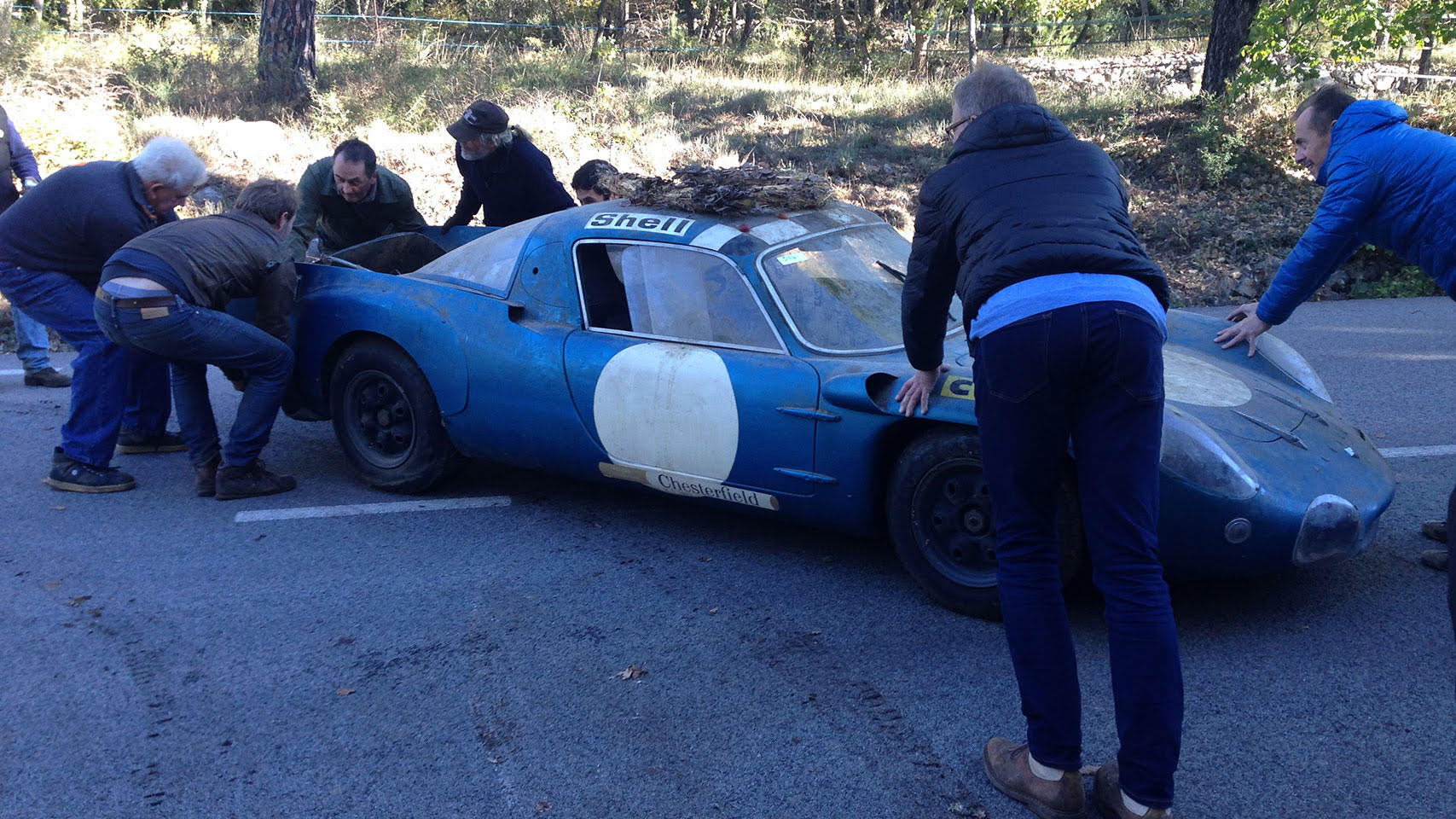 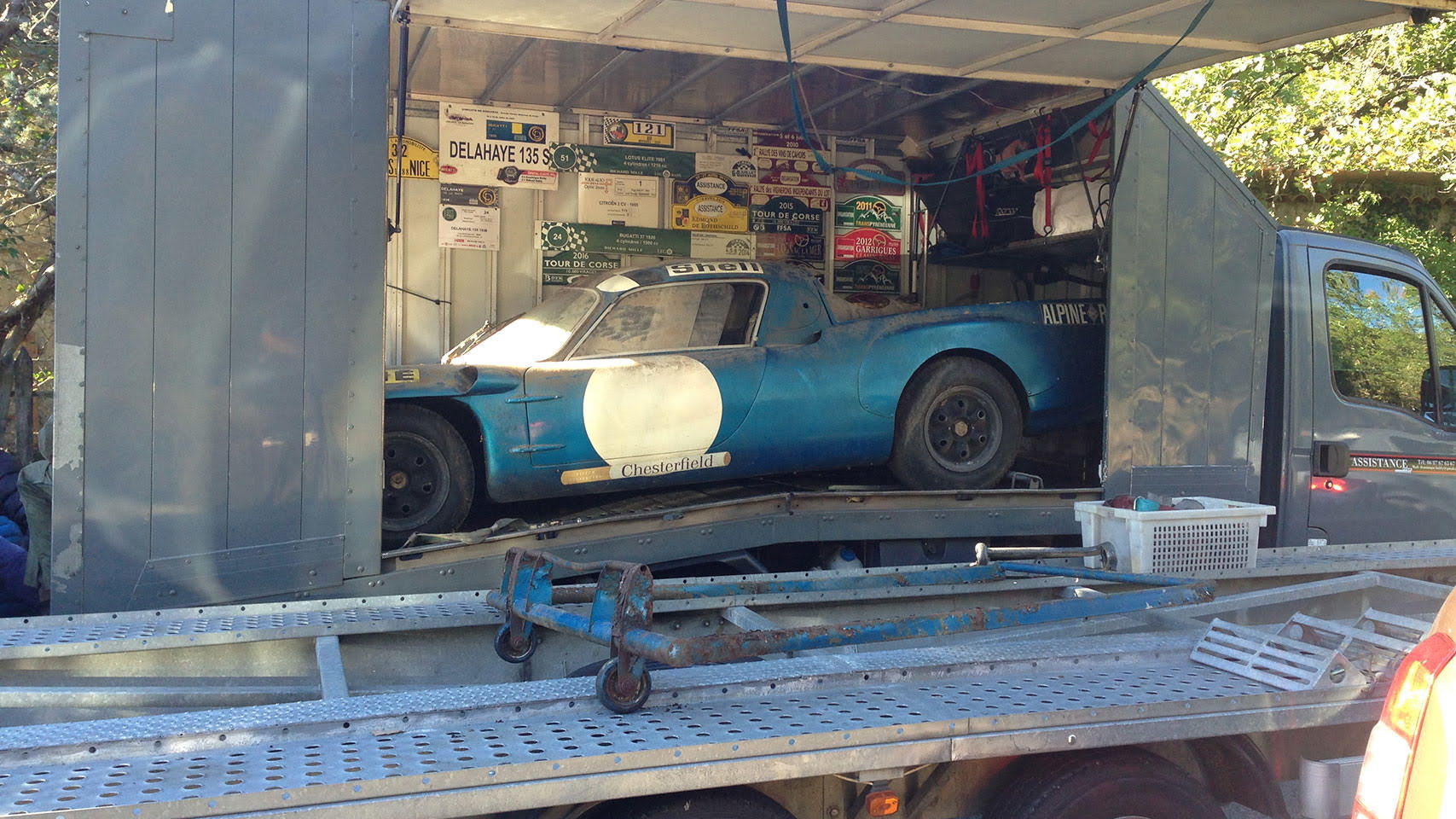 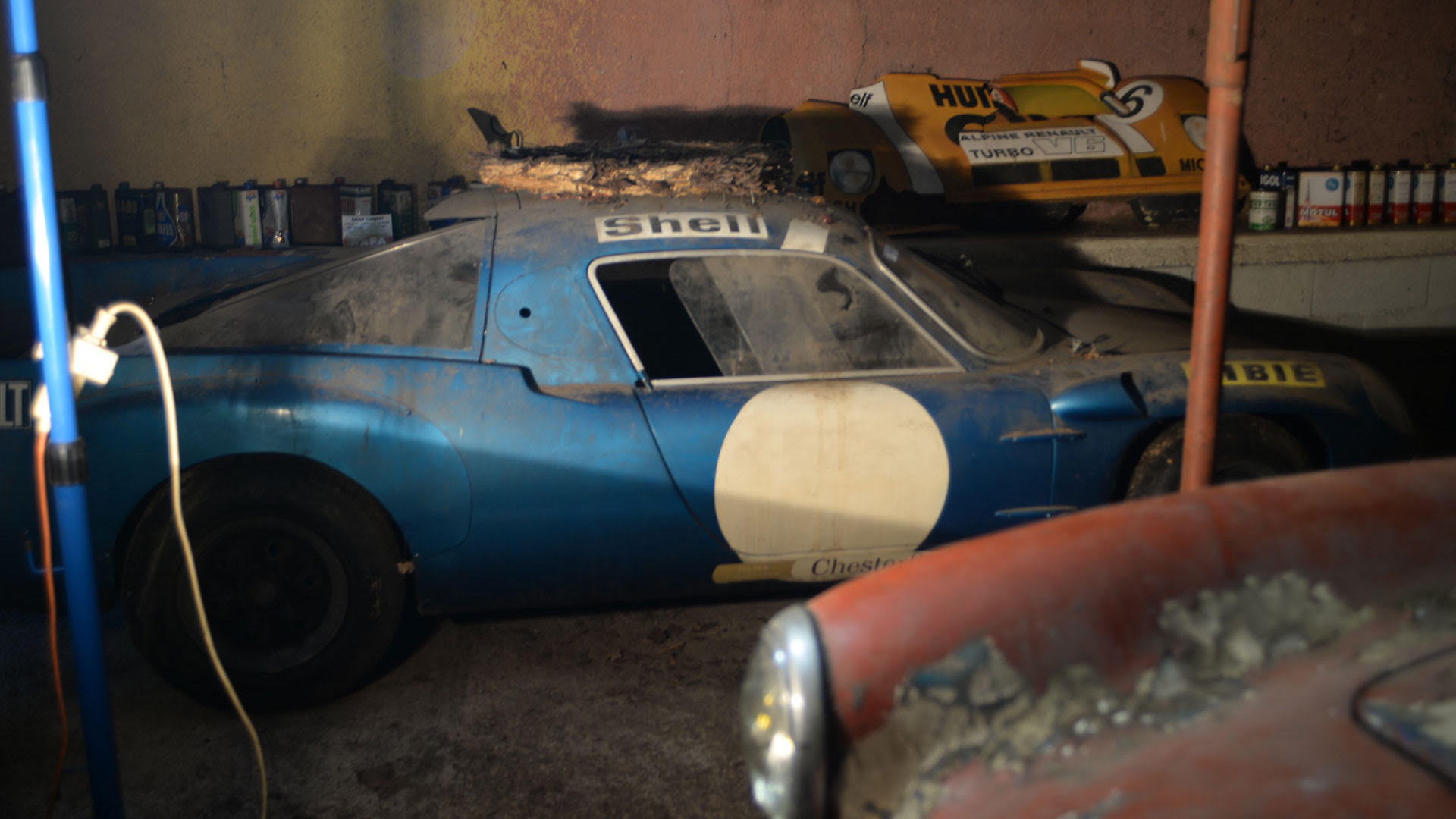 It's hard to imagine a more romantic barn find than a dust-covered Le Mans prototype quietly sitting, waiting, in a dilapidated wood shed covered with moss in the south of France.

When vintage car racer/restorer Graham Long and I first saw it on a cold, winter evening, it was as if we'd stumbled upon a previously undiscovered Egyptian crypt. Sitting on Michelin race tires that still held air, the Alpine A210 looked like it had rolled into this shed immediately following the 1969 24 Hours of Le Mans and was then forgotten for 47 years. And that's close to what happened. Laying on its dusty top was a circle of twigs, the remnants of a trophy wreath, the flower petals and leaves all withered away so long ago.

We got a closer look the following day. In the cool, gray air of a rainy morning, the race car looked like a dusty bottle of wine in an old cellar. Contrasting with the French Blue paint were large white roundels flanked by small lamps designed to illuminate the numbers at night when blasting past at well over 100 mph. Those lamps were a dead giveaway that this was a car that raced at Le Mans. A checkered flag motif decorated the leading edge of the roof above the dusty windscreen. The body work looked perfect, the cabin a veritable time capsule.

We didn't have much time. Outside the shed were three dozen French men and women, bundled up and shivering in the rain, awaiting their turn to be allowed in to see their national treasure. They could barely make out the car from outside.

Surrounding the shed was a garden of treasures, scores of Alpine A110s, a couple of A108s, an AC Ace, a burned out and rotted Lamborghini Miura S, a handsome pre-war Citroen flatbed truck, a handful of Renaults, rally cars, Alfa Romeos, a Mini Moke, a Land Rover, dozens of rusting rare pre-war motorcycles, engines, gearboxes, Cibie lights, camping trailers, and other automotive flotsam. All lay scattered about the mountainous forest, some in pieces, some perched atop outbuildings, a few stowed in sheds.

But the crowd of bundled up Frenchmen was focused on the holy grail, a 1967 Alpine A210 prototype that had run the 24 Hours of Le Mans three times, scoring class wins in 1967 and 1968, averaging more than 100 mph, including stops for fuel and driver changes--fast traffic by anyone's standards. Its last race was a DNF during the 1969 Le Mans 24. Shortly after that it was rolled into Gerard Gombert's shed where it sat until this crowd of automotive enthusiasts showed up almost five decades later.

The Alpine A210 was small mid-engine sports racer built on a lightweight, fully welded tubular spaceframe chassis with a fiberglass body. Its fully independent suspension used wishbones front and rear, with disc brakes all around. The wheelbase was just 91 inches. Overall length was 14.3 feet with long, swoopy overhangs, but it was less than five feet wide. Overall height was a mere 41.4 inches, making it just slightly taller than the Ford GT40 (so-named for its height in inches), which dominated the top class at Le Mans from 1966 to 1969.

Grooved Dunlop bias-ply racing tires were used initially, but Michelin worked closely with Alpine to develop its radial racing tires as well as a new racing tire without grooves that came to be known as a slick.

These Alpine Le Mans prototypes are rare. Famous for rallying, Alpine only built two dozen prototypes. The goal for these prototypes was always Le Mans. Only eight A210s were built, making Alpine chassis 1725, the car in this French shed, a very rare car.

The chassis for the first Alpine prototype, the 1963 M63, was inspired by the Lotus 23 chassis. Lotus founder Colin Chapman, still seething that his Lotus 23 was denied entry to Le Mans in 1962 and vowing to never return (Lotus never ran Le Mans again), shipped a Lotus 23 chassis to Alpine founder Jean Redele, suggesting he copy it.

Apparently, the two men admired one another. Chapman and Redele shared the view the performance and handling should be achieved through the minimization of mass. Each had founded a car company around that principle, and each had done it to fuel his passion for racing.

Besides Le Mans, this car earned a class victory at the 12 Hours of Reims in 1967, a rural road course in France with long, high-speed straightaways near a village with a name no American knows how to pronounce. It raced around the 13-mile Nürburgring Nordschleife circuit in 1967 and 1968 in 300-mile races, in what was truly a green hell. It also raced around the Kyalami grand prix circuit in South Africa for nine hours (to promote sales of Alpine A110s in South Africa).

Gerard Gombert in his prime

How Gerard Gombert came about this car is the subject of debate. It was part of his massive stockpile of cars, the vast majority of which were left in the woods where they rusted and rotted. A strong, handsome, stylish young man, Gombert ran a car repair and performance business for Alpine, Lotus, Renault, and other marques.

His shop and his home were nestled along the thickly wooded slopes on the southern coast of France near Draguignan, below the old mountaintop village of Fayence.

Somewhere along the line, perhaps at the end of the 1960s, he seemed to lose his way and began accumulating every car he could. Some were wrecks. The Miura S had been crashed, burned and cut up. Apparently, he would get one of these cars onto his property, pull the cylinder head off engine, set it on the ground nearby, then move on to the next project, leaving everything out in the rain and salt air wafting up from the nearby Mediterranean Sea.

One of the few exceptions was this Alpine A210.

It had been rolled into the shed and sheltered from the elements. The backlight (the rear plexiglass or Lexan that doubled as an engine cover) had been broken, perhaps when a formula car that had been hanging above the Alpine was moved out in preparation for the auction preview. Otherwise, the bodywork looked immaculate. It appeared to us that it could simply be washed and rolled onto the field proudly sporting 47 years of patina.

Once restored mechanically, this A210 would be about as close as one can get to a guaranteed entry to the Le Mans Classic vintage race. It would likely be an easy car to maintain, too. Its design is straightforward and easy to understand. Light in weight and powered by a 4-cylinder engine, it would be easy on brakes and tires. Gears for Hewland gearboxes are readily available, making it easy to set up for different racetracks.

The emotional aspect is part of the attraction of Alpine. Roll this car out anywhere in France (or anywhere, really) and you will soon be talking to a Frenchman shedding tears of joy, recalling when he (and 350,000 of his closest friends) saw the "Alpeen" race at Le Mans. Automotive emotion doesn't get any stronger than what the French have for Alpine. Not even the Italian lust for Ferrari can match it.

These cars have been rarely seen in America, other than at the 12 Hours of Sebring a long time ago. Today, this car would likely be placed in races with Lola T70s or perhaps with Lotus 23s and Elva Mark VIIs. It would be an interesting car to own, show, and race.

And now here it was, for sale to the highest bidder.

Graham is an engineer who runs a shop in Clifton, New Jersey, specializing in vintage race cars and other vintage vehicles. He and I examined the car as well as possible, and we decided it was in amazingly good condition. We saw no rust issues or any other signs of serious concern. Of course, it would need to be completely dismantled, the chassis checked, wear items replaced, but everything was there and it appeared to be a wonderful race car. We decided it was a buy, so we left the shed, toured the garden, and drove to Fayence for lunch.

Any thoughts of sneaking in and buying a dusty old car no one wanted for a song were dashed, however. Vintage car enthusiasts showed up in droves. A traffic jam formed along the rural road that wound by Gombert's garden, and police had to install a portable traffic signal to manage the chaos.

The auction itself, conducted by Paris auctioneer Osenat, was held in a small auditorium in Fayence, an old mountaintop French village with outstanding food, excellent espresso, and breathtaking views of the valley below. Throngs appeared for the auction, jamming the entrance to the auditorium. Few auction attendees spoke English, but most spoke Alpine fluently and fully understood the significance of the A210.

Alpine chassis 1725 sold for 872,800 euros, which at the time translated to $915,000 with the hefty buyer's premium included. This far exceeded our expectations and budget. At least two buyers saw this car as being worth that amount and the winner got a fantastic car. Its amazing history, its rarity, its capability as a Le Mans Classic entry, its excellent condition, and the barn-find aura and romance add up to a valuable collectible. We suspect this car will not be relegated to a museum.

We fully expect to see it at the next Le Mans Classic, which is set for July 6-9, 2018.  We look forward to seeing it return to the circuit where it saw so much success so long ago.

Thankfully, the trip wasn't for naught: I went home with an old Alpine Le Mans poster.