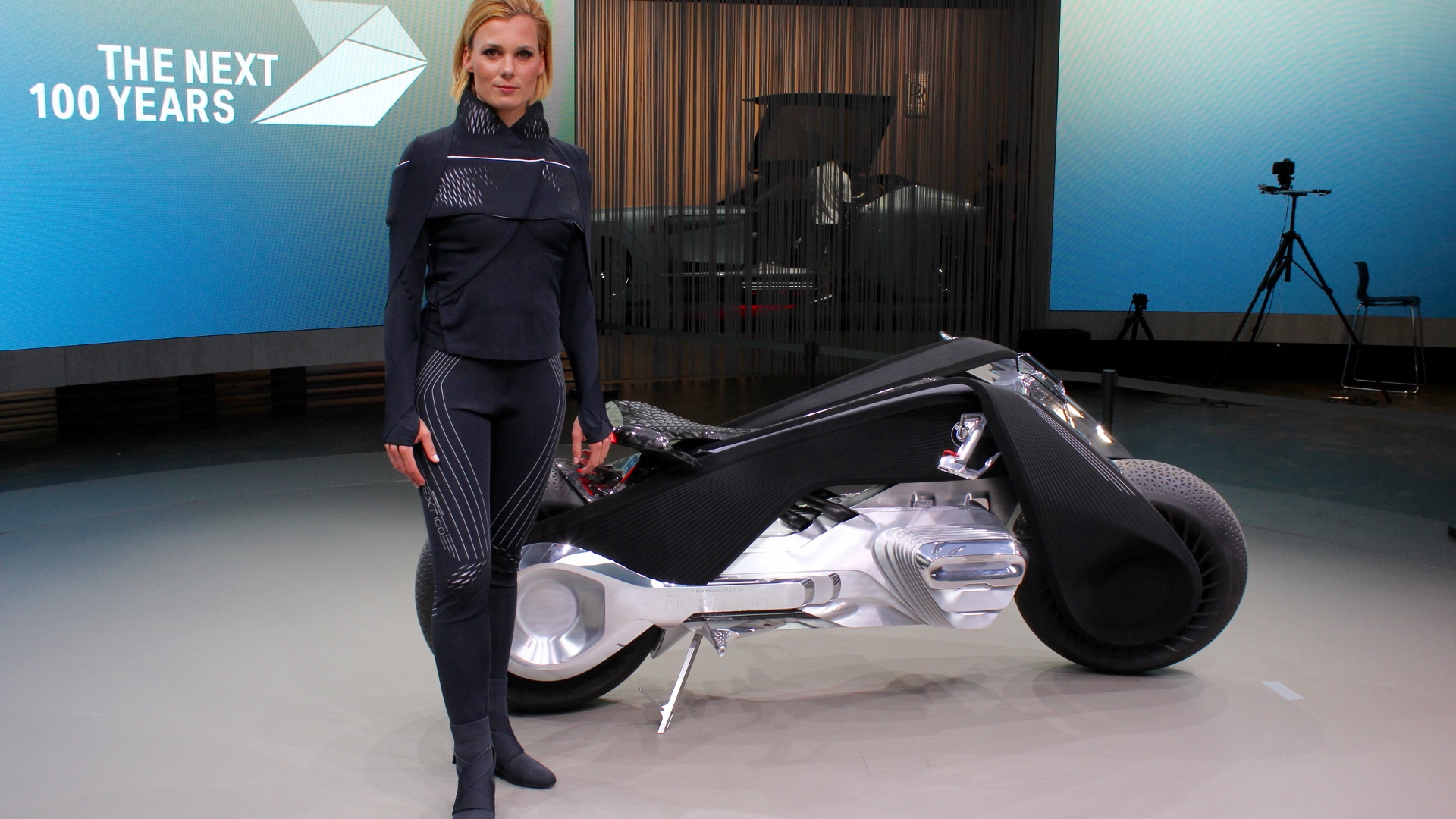 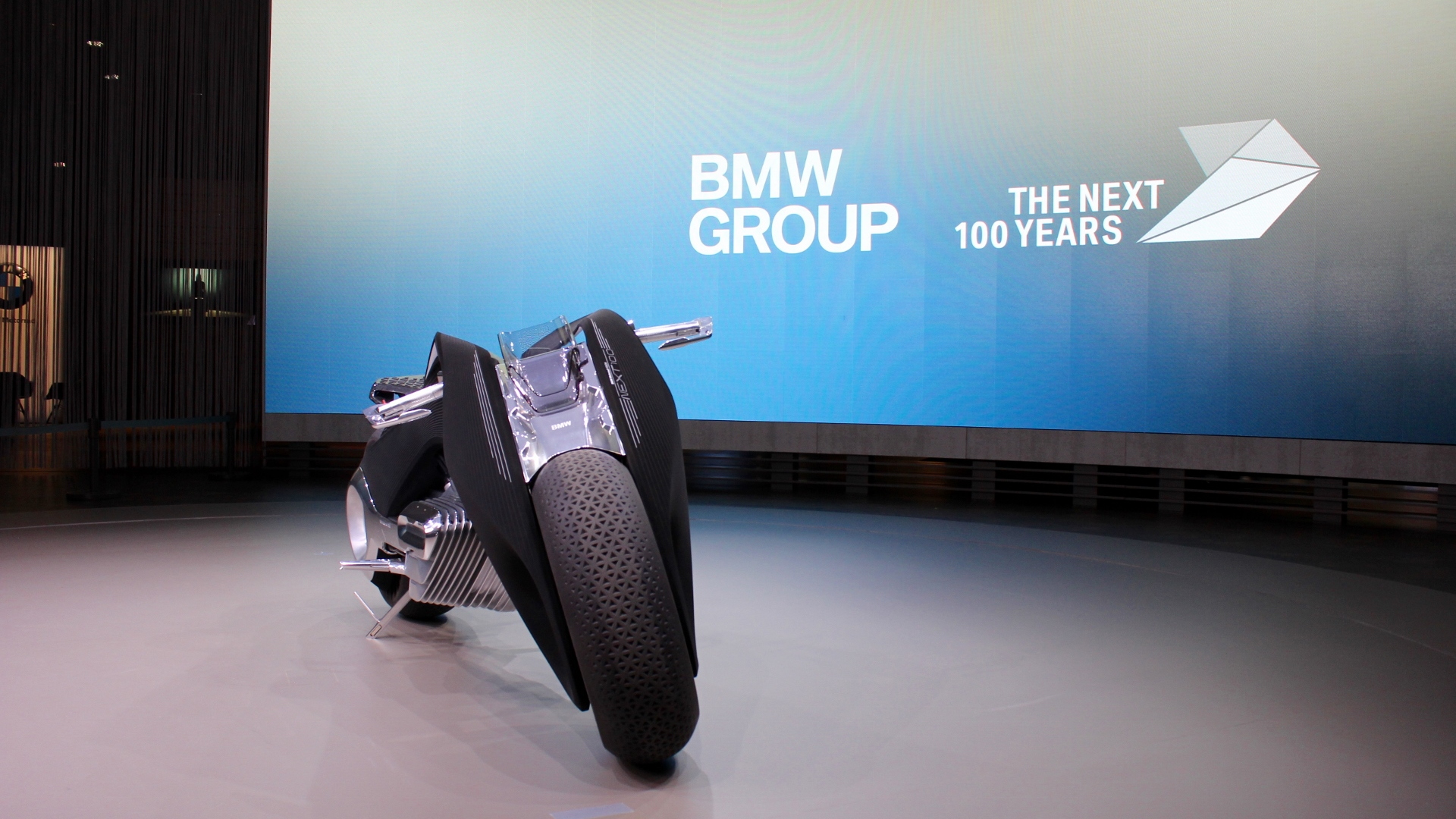 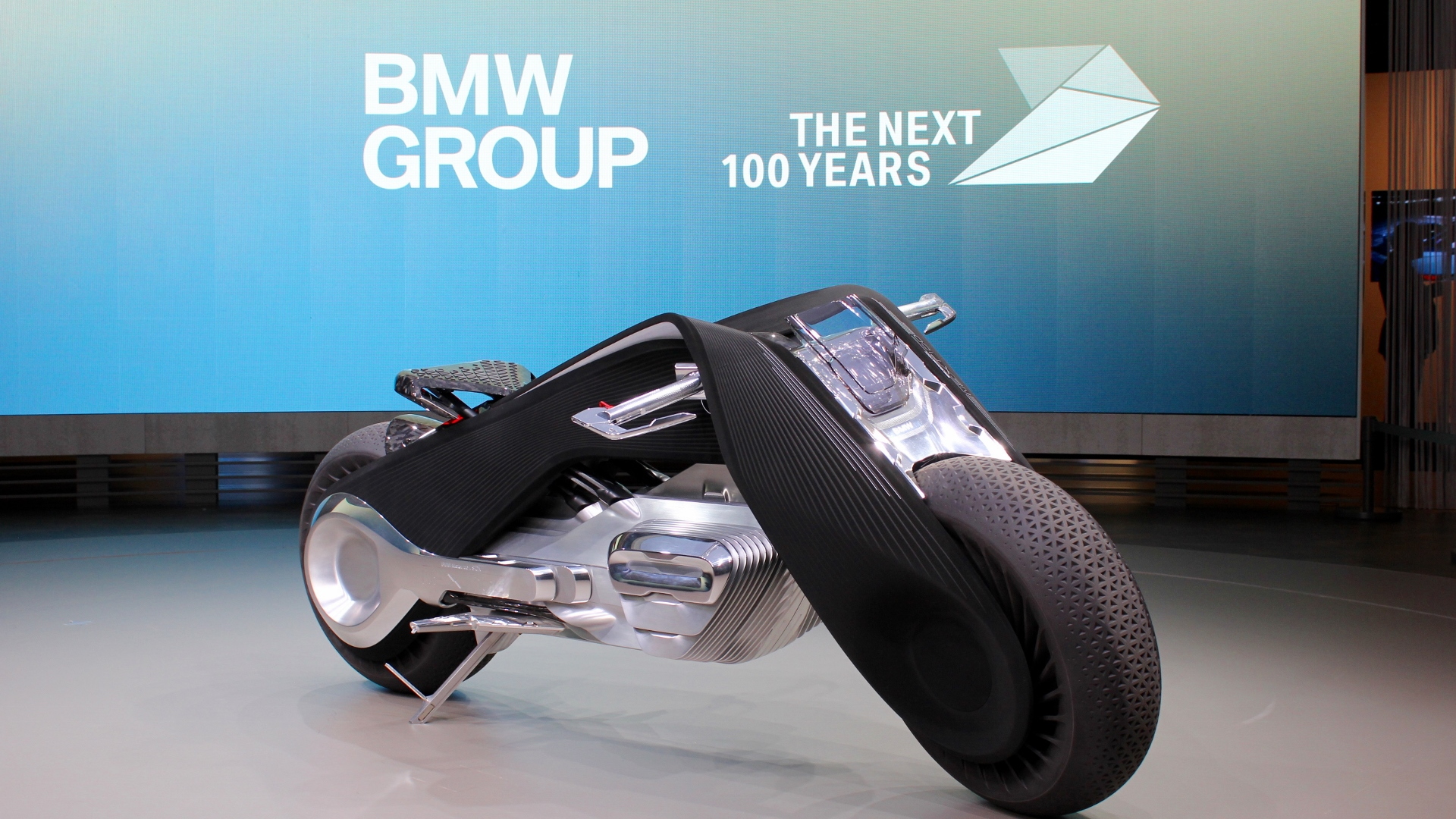 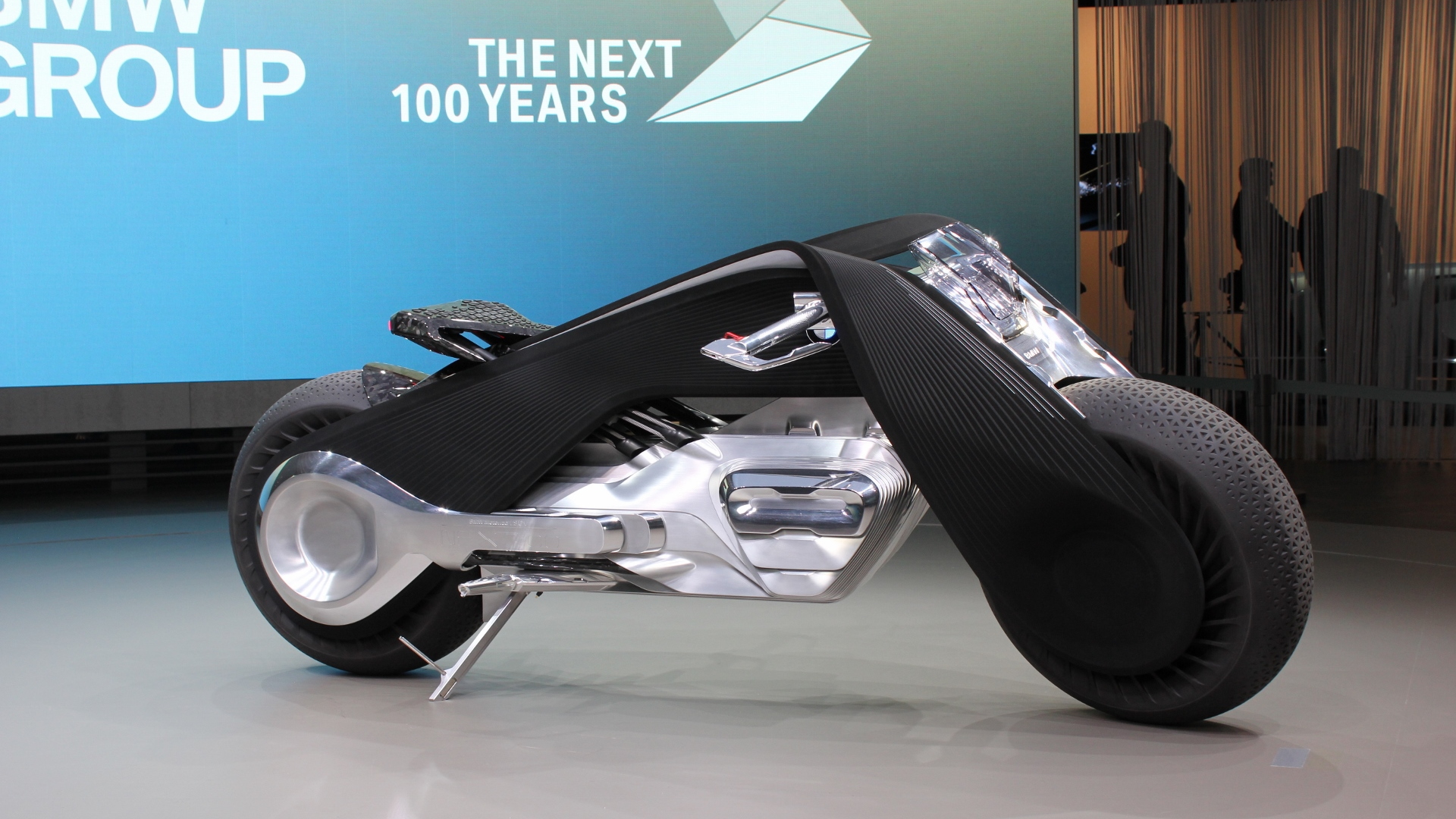 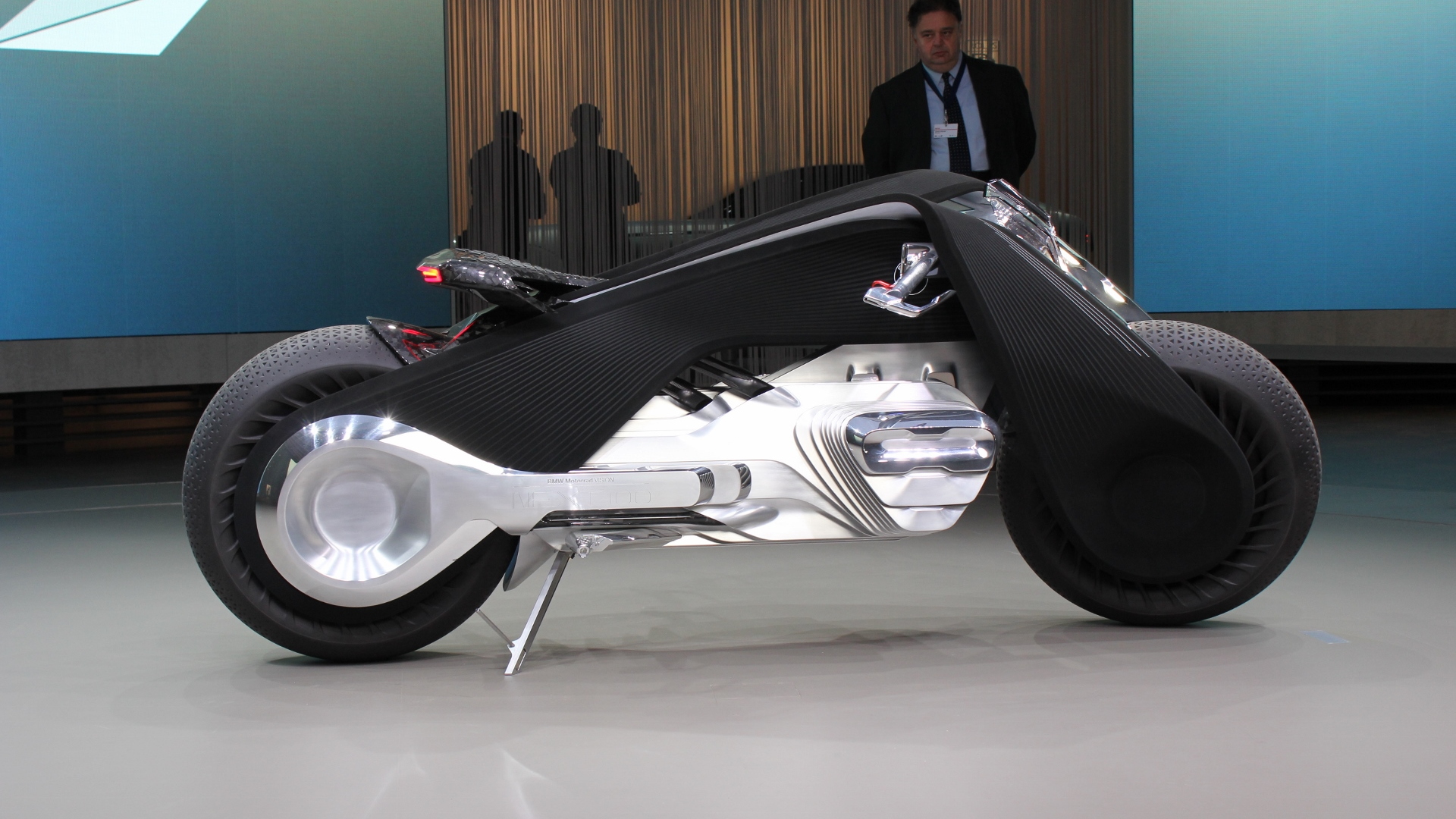 BMW’s Iconic Impulses world tour reached its final destination in Los Angeles this week, where BMW Motorrad revealed its vision for the future of two-wheeled mobility. As part of the company’s 100th anniversary, the automaker has produced four unique concept vehicles this year--one from each brand--to show off its technology and design virtue for the coming age.

BMW’s contribution seeks to turn every driver into the ultimate driver, MINI’s offering defines urban mobility and personalization, Rolls-Royce’s chariot is the pinnacle of luxurious transport, and now BMW Motorrad’s concept bonds man with both machine and nature.

"It's the last great escape from everyday life," said Edgar Heinrich, BMW Motorrad's design chief. “Riding a BMW motorcycle has always been a sensual experience. This won't change. Motorcycling is for the soul, the acceleration, the wind in your hair, the sound…it's pure emotion.”

At first glance, BMW Motorrad’s Vision Next 100 concept looks more like artwork than functional equipment, but executives assure us the bike’s technology and styling cues could realistically translate to future products.

Beyond its general shape and roadster riding position, little about the vehicle mirrors modern sport bikes. Instead of a traditional frame, the concept’s Flexframe is like a piece of raked taffy pulled from the front wheel, flowing between the handgrips and down to the rear tire, creating a triangular shape. This malleable structure bends with the pivoting handlebars, replacing joints and the front fork. BMW says the force needed to bend the Flexframe and therefore steer the bike can change, becoming easy at low speeds and harder as the speeds increase.

The seat, upper frame cover, and wings are made of carbon, while other sections of the frame use banded fabric. In place of suspension components, rimless tires help dampen the structure. These tires have variable tread that adapts to various surfaces to provide optimal traction. Aluminum fills in the remaining gaps, forming the handlebars, rear fork, and “zero emissions" (read: electric) powertrain. Double-C LED taillights, similar to ones on contemporary BMW bikes, streamline the rear end.

The naked design has a few tricks up its sleeves, too. BMW’s iconic boxer flat twin engine isn’t actually on board, just its shape. At speed, the accordion structure expands outward, working in tandem with the Flexframe and clear windscreen to shield riders from the elements like a full fairing…and “because it just looks cool,” added Heinrich with a smile. Easily one of the coolest bits is a built-in gyro meter that self-balances the bike when stationary or while moving (should the rider become overwhelmed).

BMW Motorrad didn’t stop innovating with the bike itself. The Vision Next 100 concept is an incomplete technological marvel without intelligent (and “fashionable”) riding gear. A full-body suit warms or cools the pilot based on weather conditions, its collar inflates to provide support for the neck, built-in sensors alert the rider when banking angles become too severe, and vibrations in the arms and legs provide navigation directions. Complementing the suit is a transparent visor that offers telemetry, navigation, and performance data across the rider’s field of vision. The goggles track eye movements to position the displayed information appropriately, but the glass can be wiped clear, simply by looking straight ahead, if the rider gets sick of visual interference. Looking up triggers the visor's rearview function.

But where are the helmet and pads?

“Autonomous cars will make it 100 percent sure there isn't an accident," remarked Stephan Schaller, head of BMW Motorrad. “Vehicle-to-vehicle communication will prevent accidents and I think it’s realistic that motorcycle riders won’t need helmets in 100 years.”

It’s a bold statement–one that pretends a bug or pebble flying into your face at 80 mph doesn’t hurt–but the sentiment is reasonable. By the time something like this concept hits the road, most vehicle traffic will be automated, and the remaining cars will be equipped to override controls in the event of a potential collision. The Vision Next 100 concept is also fitted with a Digital Companion that will warn riders when action is needed and take over in an emergency situation.

This doesn’t mean BMW plans to build fully self-driving bikes, though. “We don't envision motorcycles to drive autonomously,” stated Harald Krueger, BMW Group CEO. “Riding is about choices, and if you want to be in control, we will let you.”

During the concept’s presentation and subsequent interviews, BMW executives must have restated the bike’s “escape” proposition a hundred times. According to the company’s prophesy, our digital future will be so overwhelming that we’ll crave advanced motorcycles to flee our even more advanced urban centers. Worryingly, it may prove true. “Mechanics will be a luxury in the future,” foretold Heinrich. “Not everyone will be able to interact with machines.”

BMW Motorrad’s inspired two-wheeler is stunning and innovative. Few will argue the contrary. Still, my choice for an escape would be the concept’s ancestor and design influence, a 1923 BMW R32..