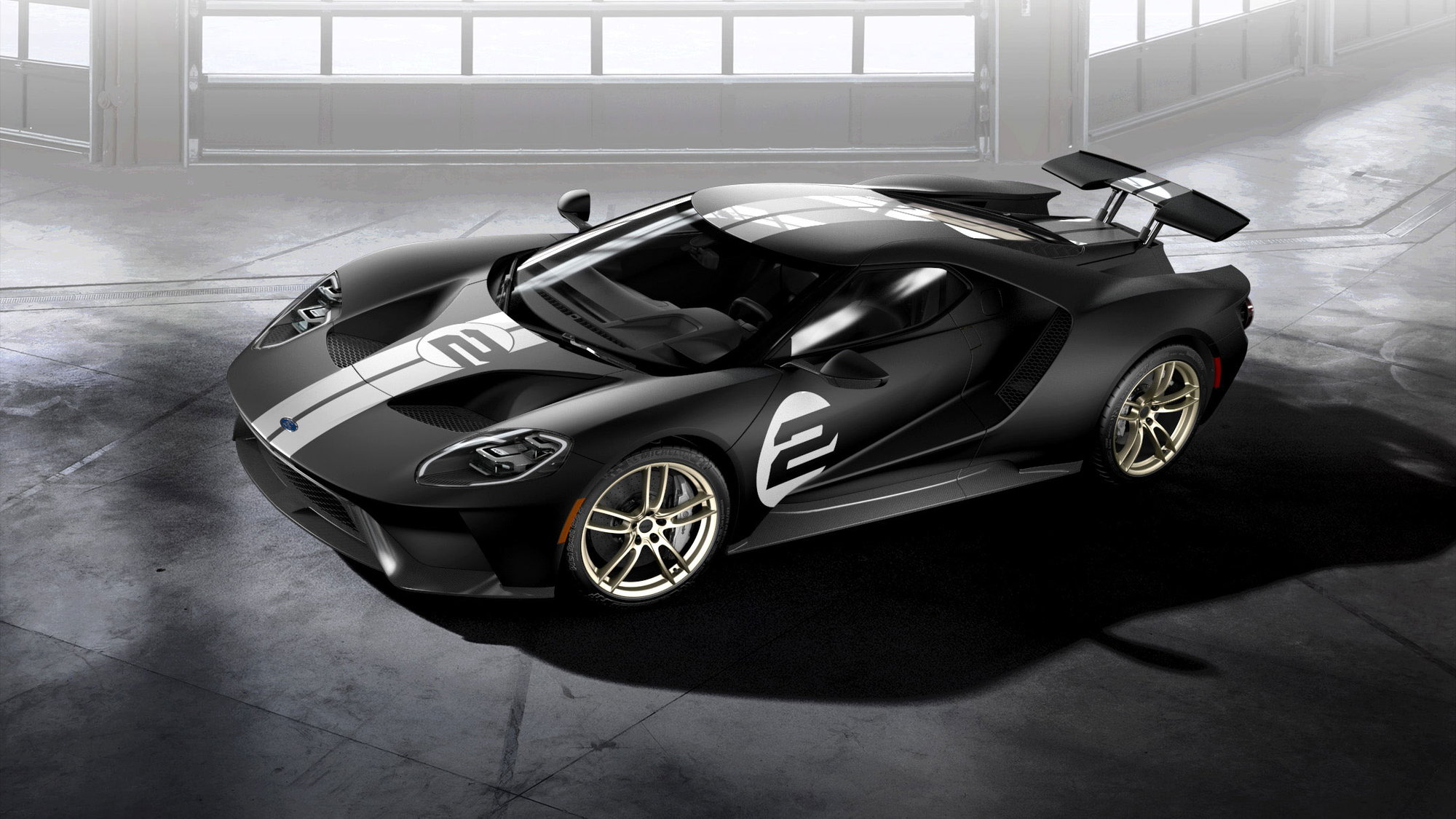 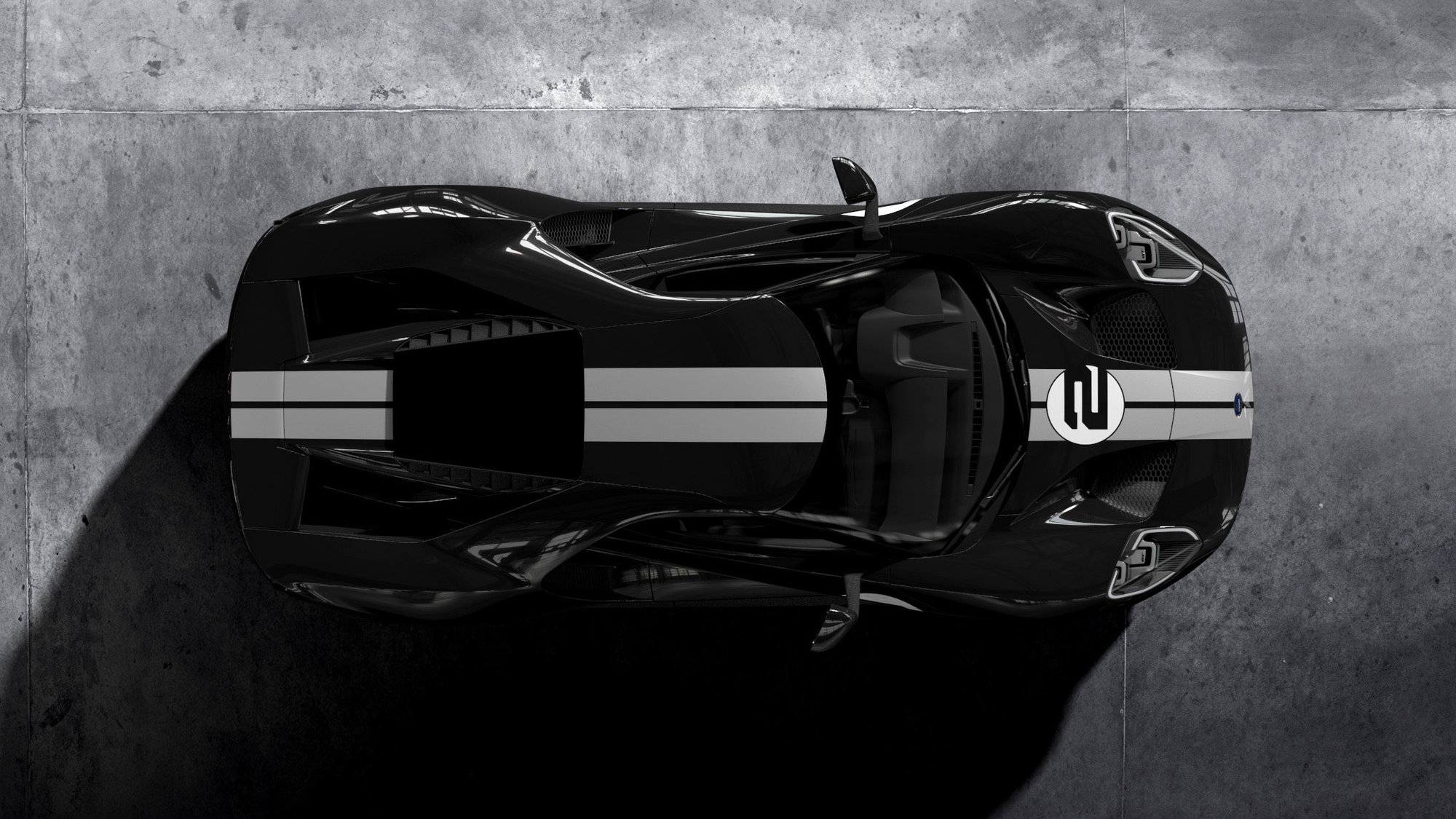 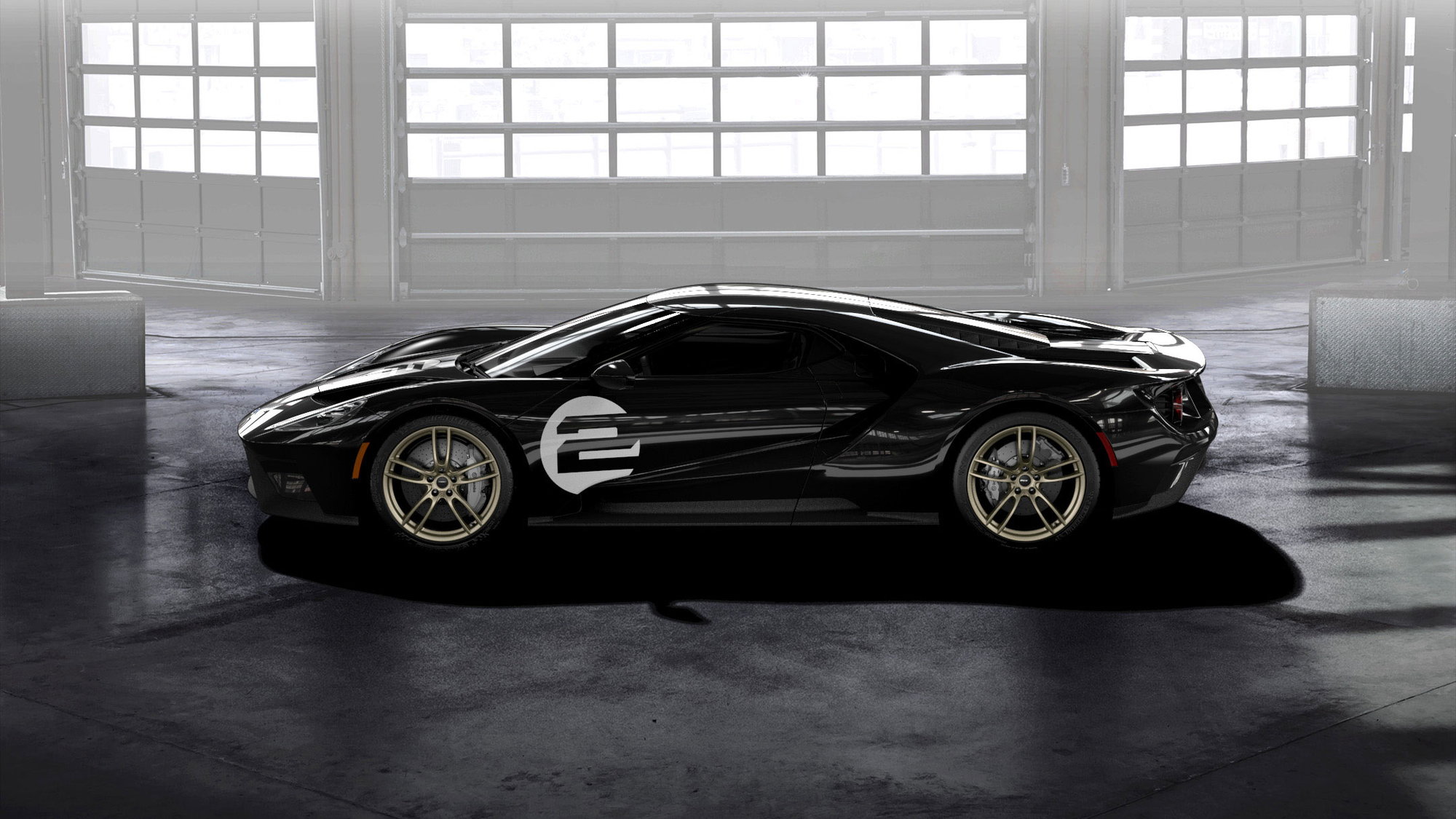 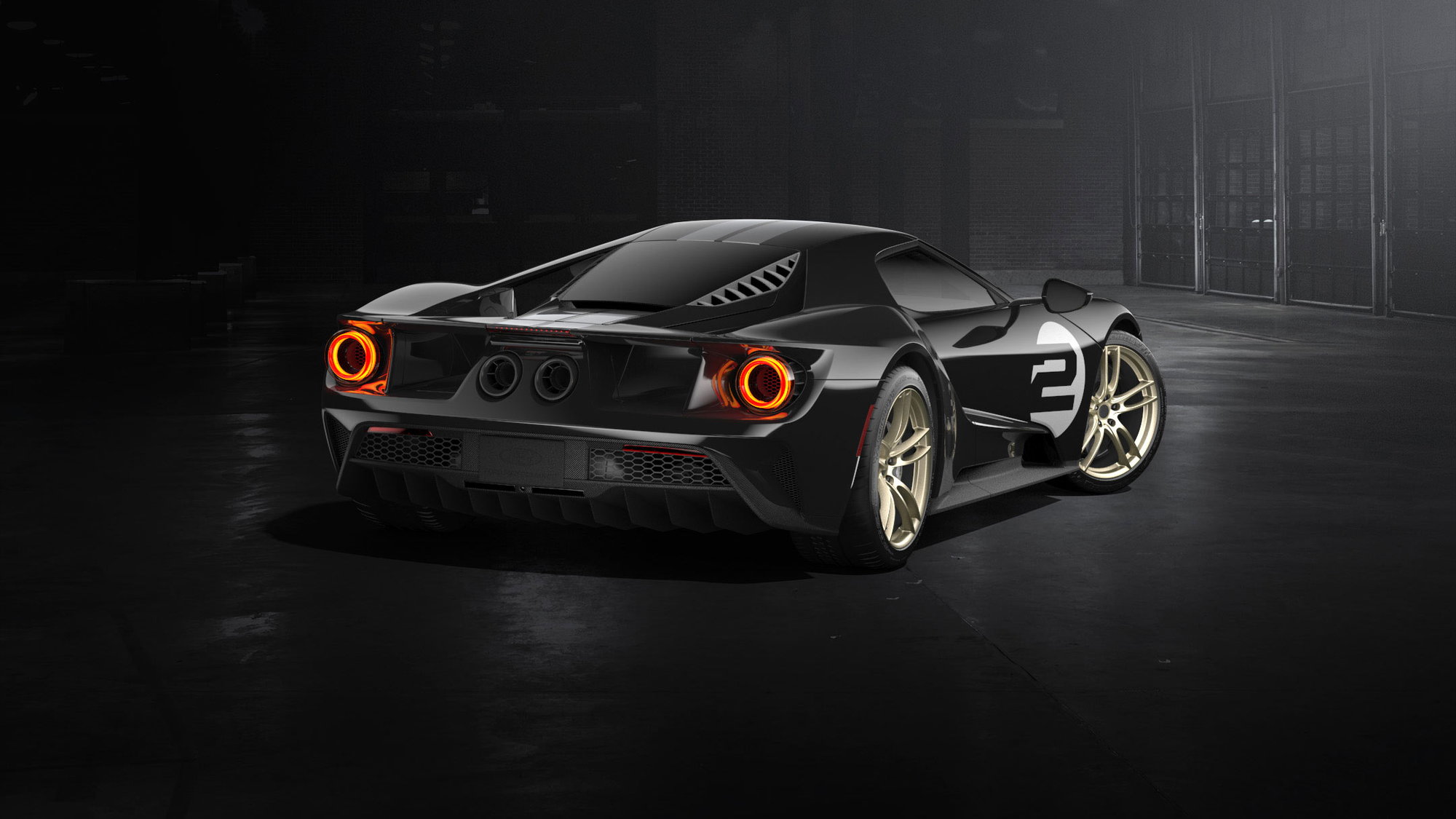 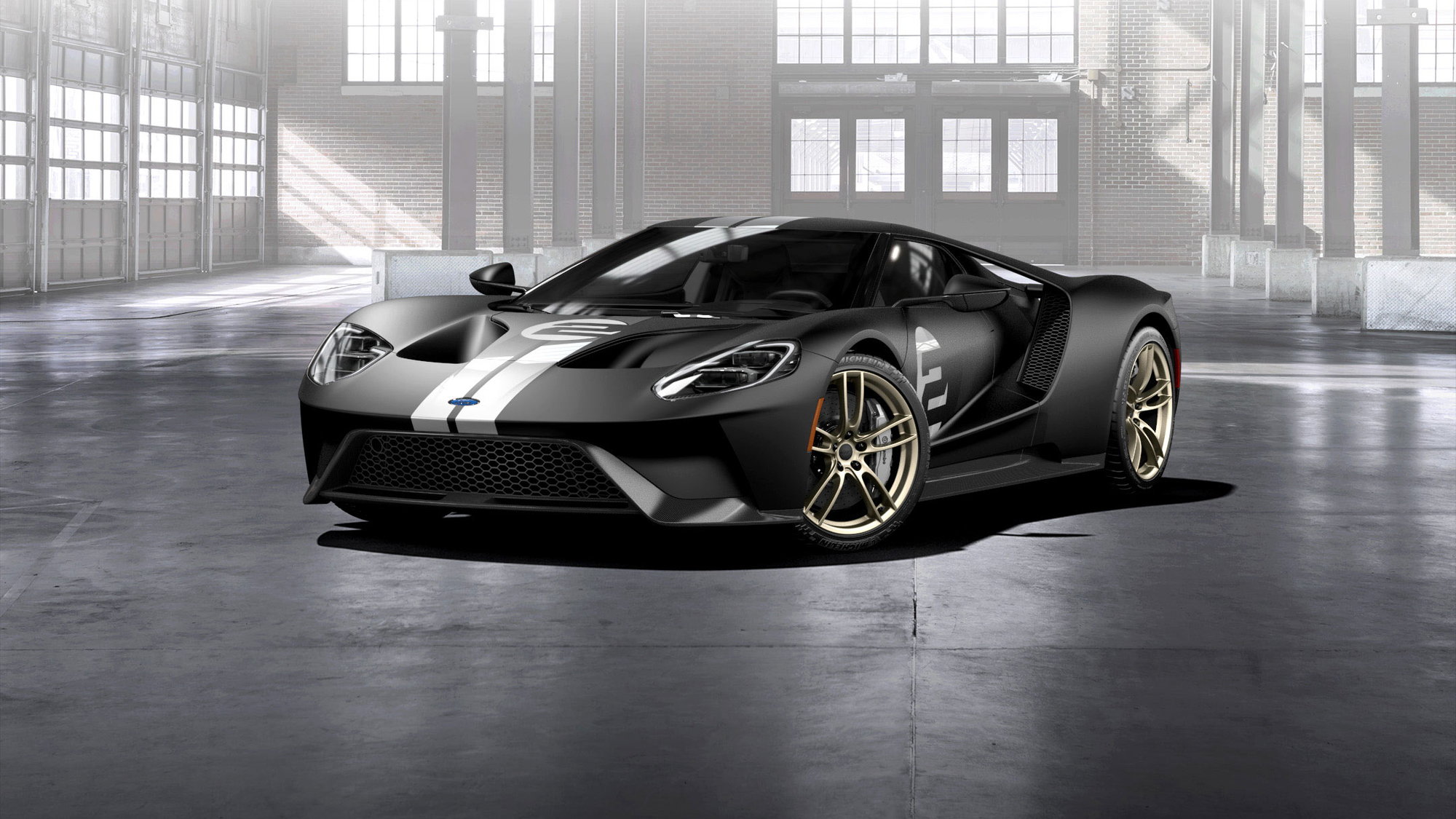 Everything is coming up Le Mans for the forthcoming 2017 Ford GT supercar. Just a couple weeks ago, Ford returned to Le Mans to commemorate the 50th anniversary of it legendary 1-2-3 finish with the GT40. The return was a success as the reborn Ford GT won its class and, in fact, took a 1-2-4 finish. The car that won at Le Mans in 1966, chassis P1046 driven by Bruce McLaren and Chris Amon, was also on hand at Le Mans after an extensive restoration.

Now Ford has announced that it will offer a new Ford GT ’66 Heritage Edition to commemorate that win on the street.

The '66 Heritage Edition GT will come with either gloss or matte finish Shadow Black paint with silver stripes, exposed carbon fiber bits, and Frozen White #2 hood and door graphics. The 20-inch forged aluminum wheels will feature a gold satin clearcoat with black lug nuts. This is our first look at the GT in black, and to say that it looks sinister would be an understatement.

Garen Nicoghosian, exterior design manager for the car, says the Heritage Edition combines elements of the old and the new: “While the looks are distinctly based on the GT40 Mark II race car, we’ve accentuated new styling cues to provide a modern interpretation."

Inside, the Heritage Edition gets Ebony leather on the carbon-fiber-structure seats, with pillowed inserts and "plow-through" stitching. Ebony leather is also found on the instrument panel hood, the pillars, and the headliner, while the Ford GT logo is debossed on the headrests and the leather-wrapped steering wheel. Gold appliqués are applied to the instrument panel, the seat’s X-brace, and the shift paddles. Like the 1966 race car, the seat belts have blue webbing.

Also inside, there is exposed matte carbon fiber on the door sills, air register pods, and center console. A unique serialized identification plate and a #2 interior door graphic round out the changes.

Ford hasn't said how many Heritage Editions will be built, only that it is limited and it will be offered for the 2017 model year only. We do know that there will only be 500 of the new GTs built over two model year with a starting price of about $400,000.