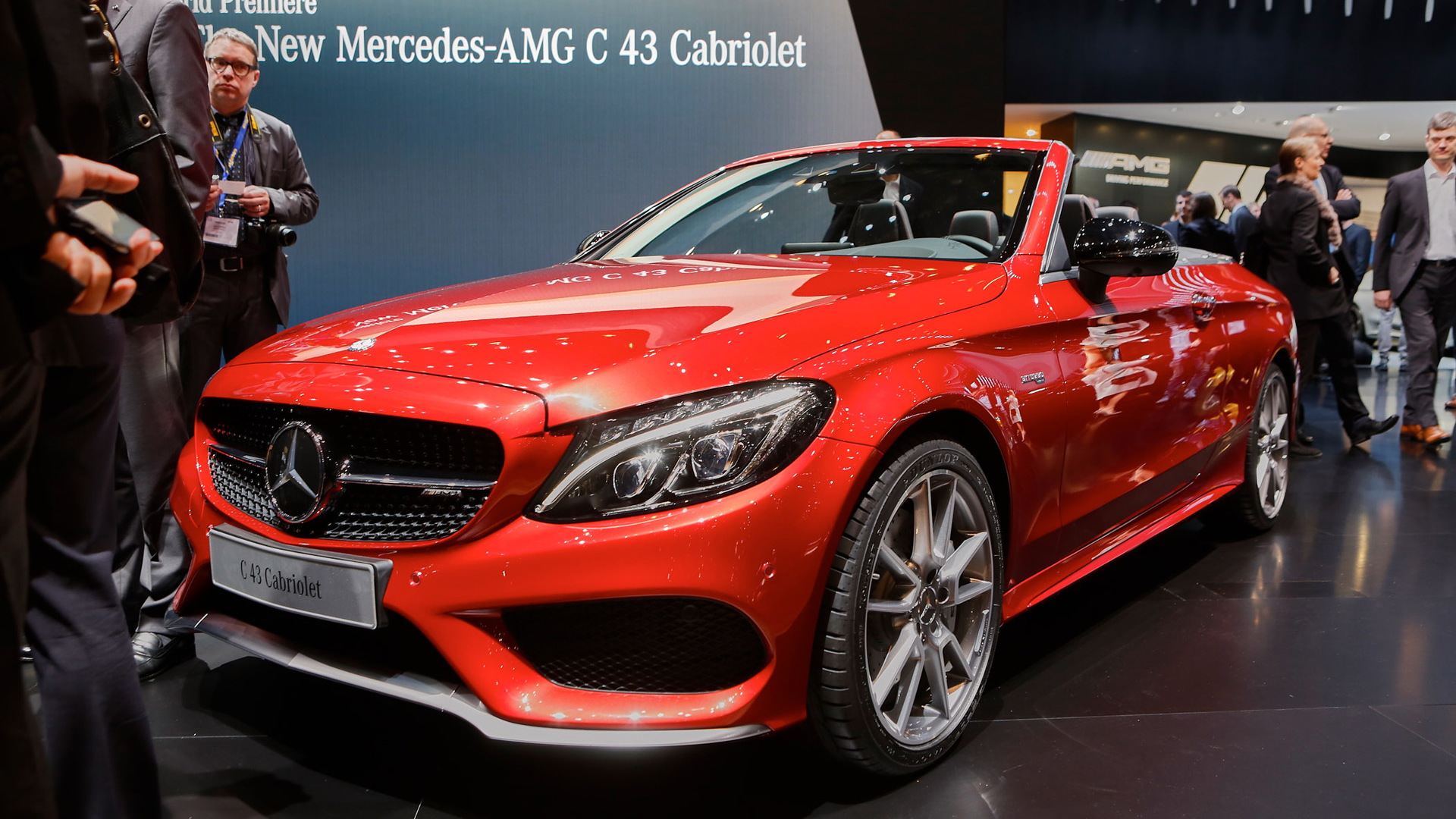 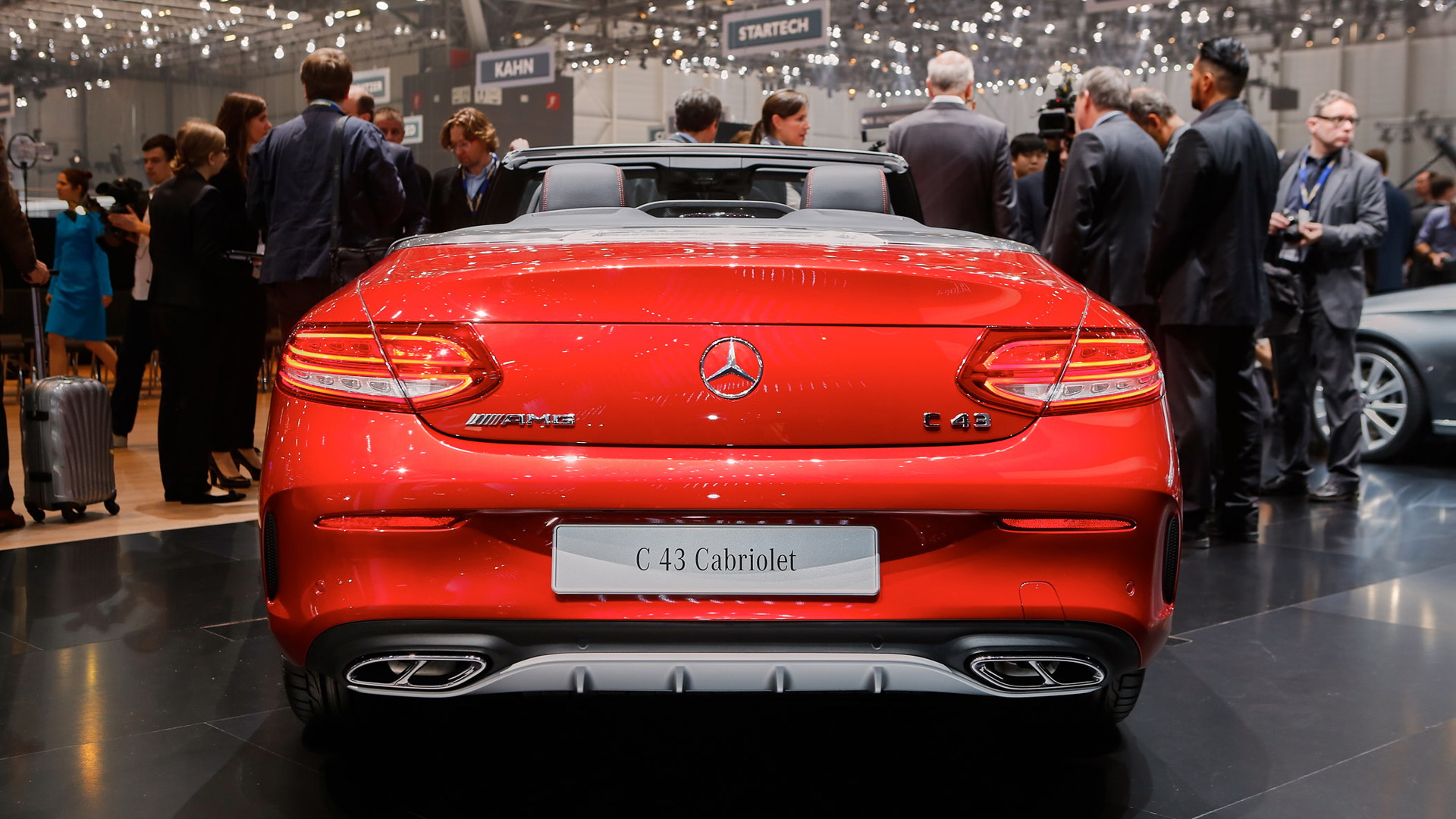 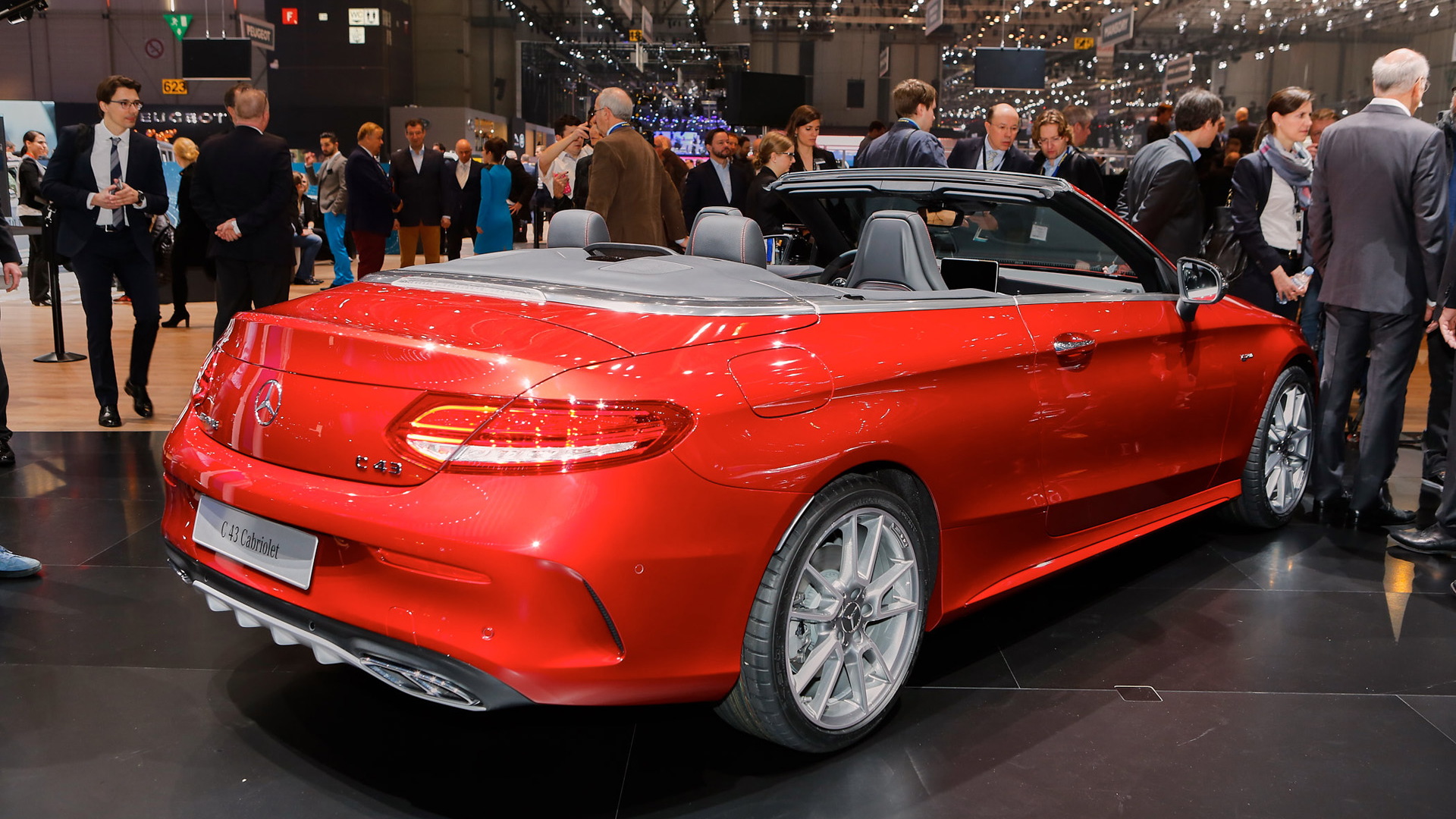 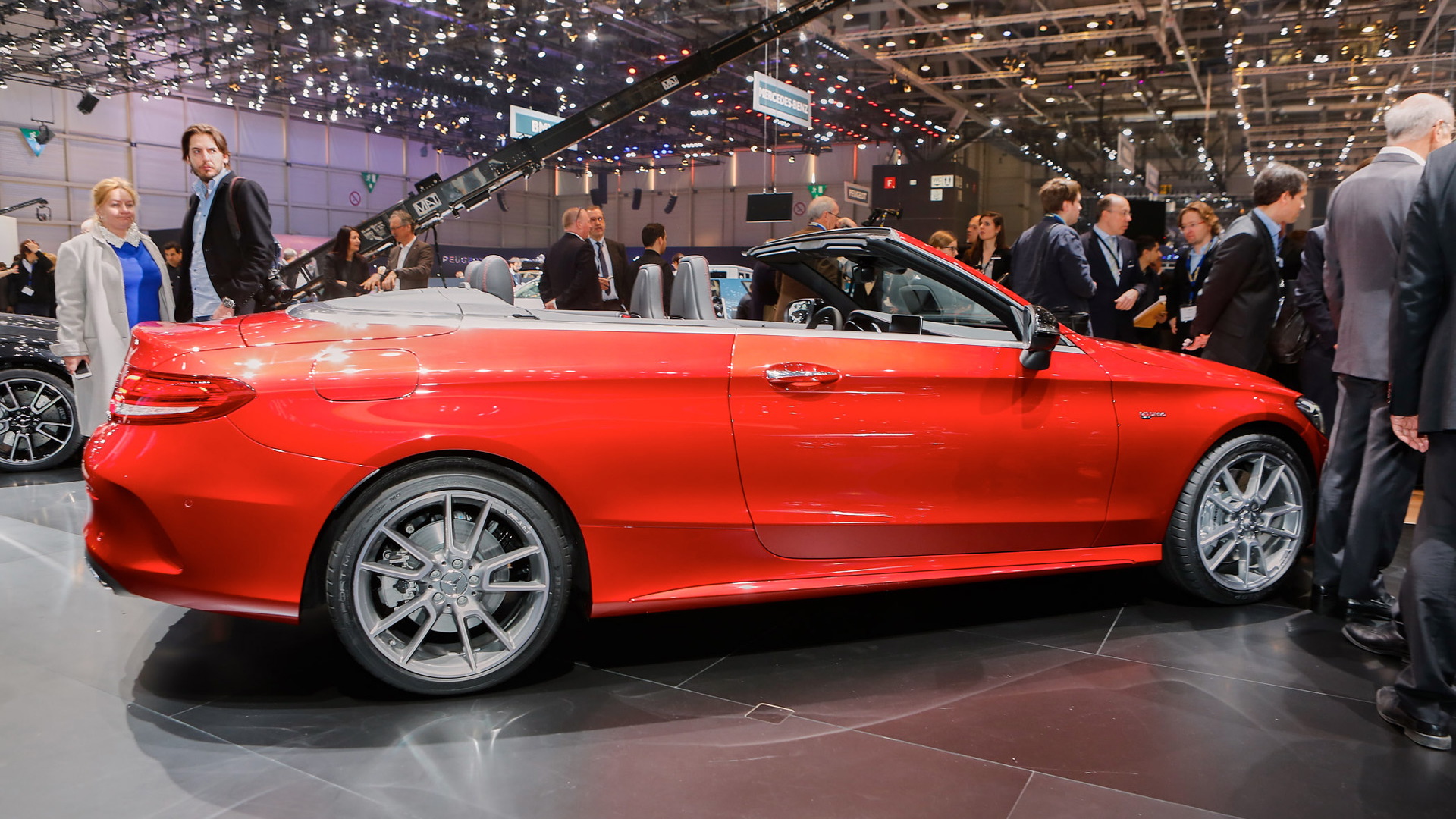 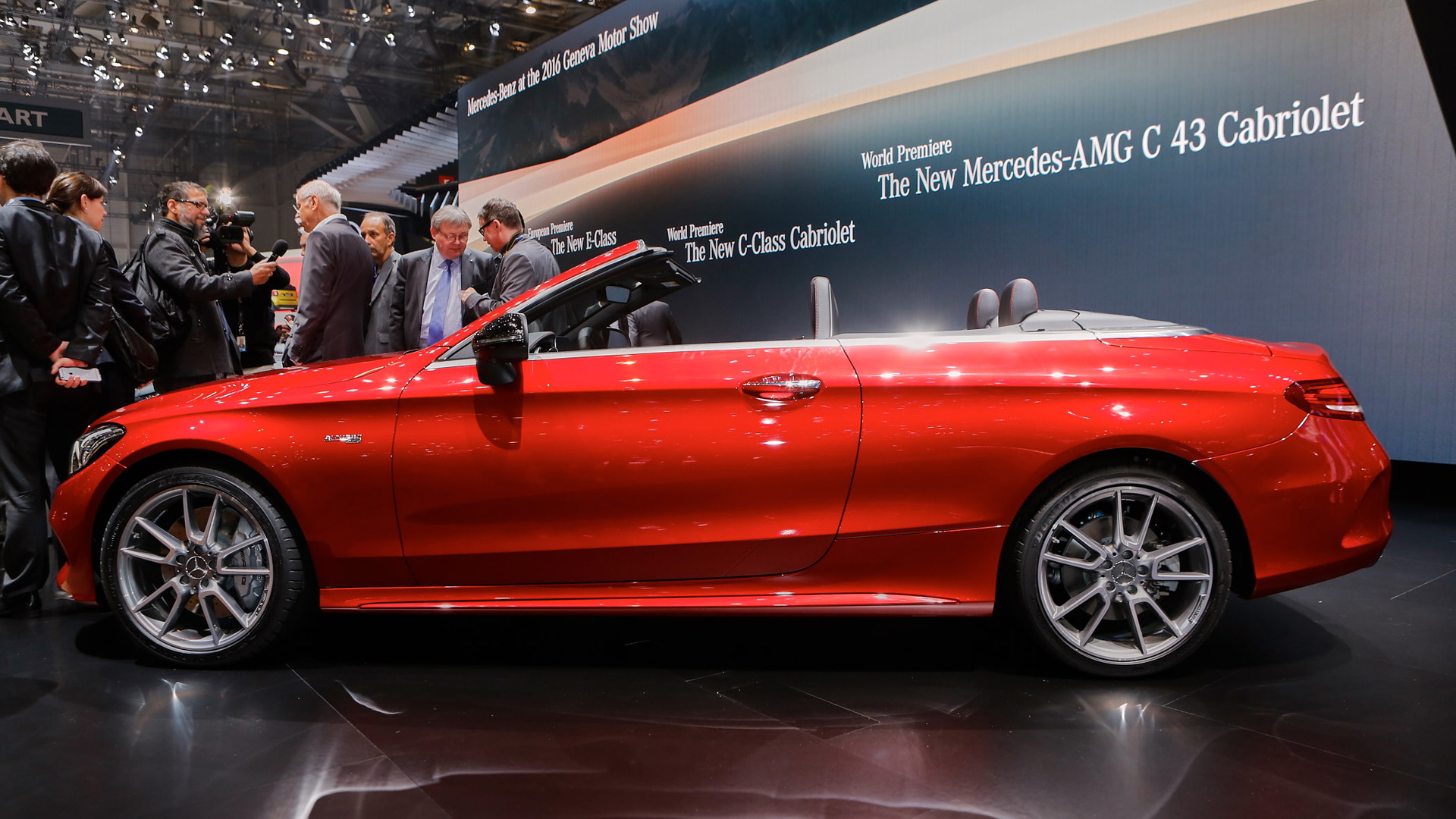 Mercedes-Benz's ever-broadening lineup will now include a shapely four-seat convertible based on the brand's previously revealed C-Class Coupe. Debuting today at the 2016 Geneva Motor Show and set to go on sale later this year as a 2017 model, the new C-Class Cabriolet marks the three-pointed star's first true foray into the compact convertible segment.

Instead of a complex and heavy folding metal roof like the rivaling BMW 4-Series, or even Mercedes' recently-unveiled SLC roadster, the C-Class Cabriolet uses a lined cloth roof. Available in a choice of four colors, the roof can be opened or closed in under 20 seconds at speeds up to 31 mph. 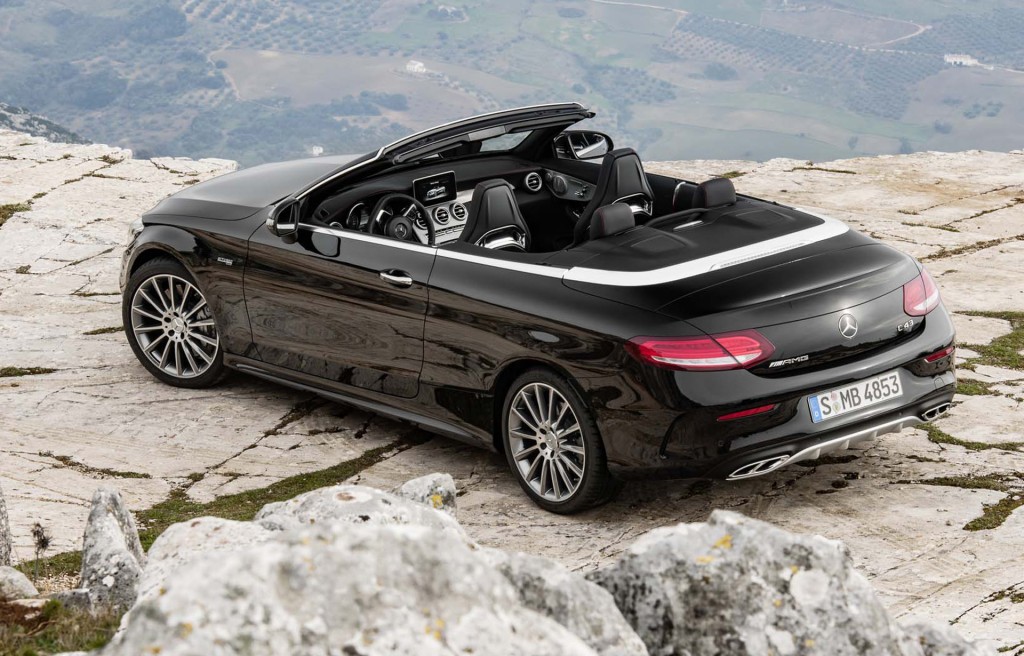 Anchoring the entry-level end of the lineup is the C300 Cabriolet, powered by a 2.0-liter turbocharged four-cylinder rated at 241 horsepower and 273 pound-feet of torque. Both rear and 4Matic all-wheel-drive variants will be available. For more sporting-minded drivers, the Mercedes-AMG C43 Cabriolet (the C43 Coupe also debuts in Geneva), available exclusively with 4Matic, includes a 3.0-liter twin-turbo V-6 rated at 362 hp and 384 lb ft of torque. Regardless of engine or drive wheels, all C-Class Cabriolets offered in the United States will come with the brand's 9G Tronic nine-speed automatic gearbox.

Setting the C43 apart from its comparatively pedestrian sibling is an AMG-tuned suspension and a more rear-biased 4Matic system that distributes power in a 31/69 percent front/rear split under normal circumstances. Uprated brakes to tame the extra power and numerous styling cues inside and out further highlight the AMG-tuned C43. 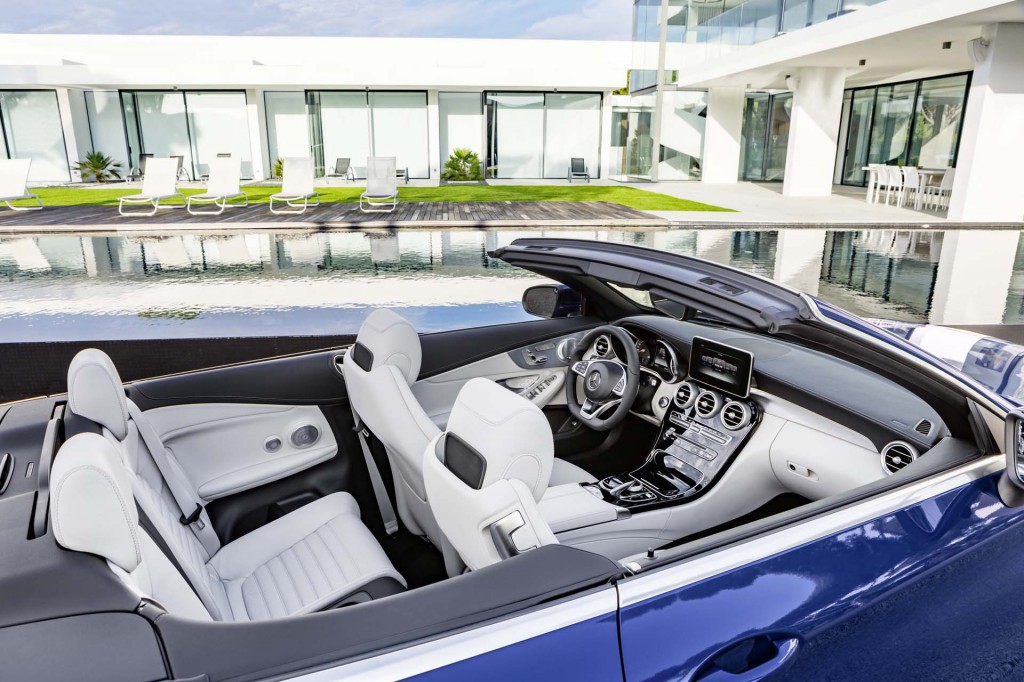 While pricing hasn't been announced, equipment levels will be higher than on an equivalent C-Class sedan. Standard features for both models include the company's Airscarf system, which pumps warm air into the front seat passengers' necks, a proximity key, heated front seats, and a 7-inch tablet-style color display.