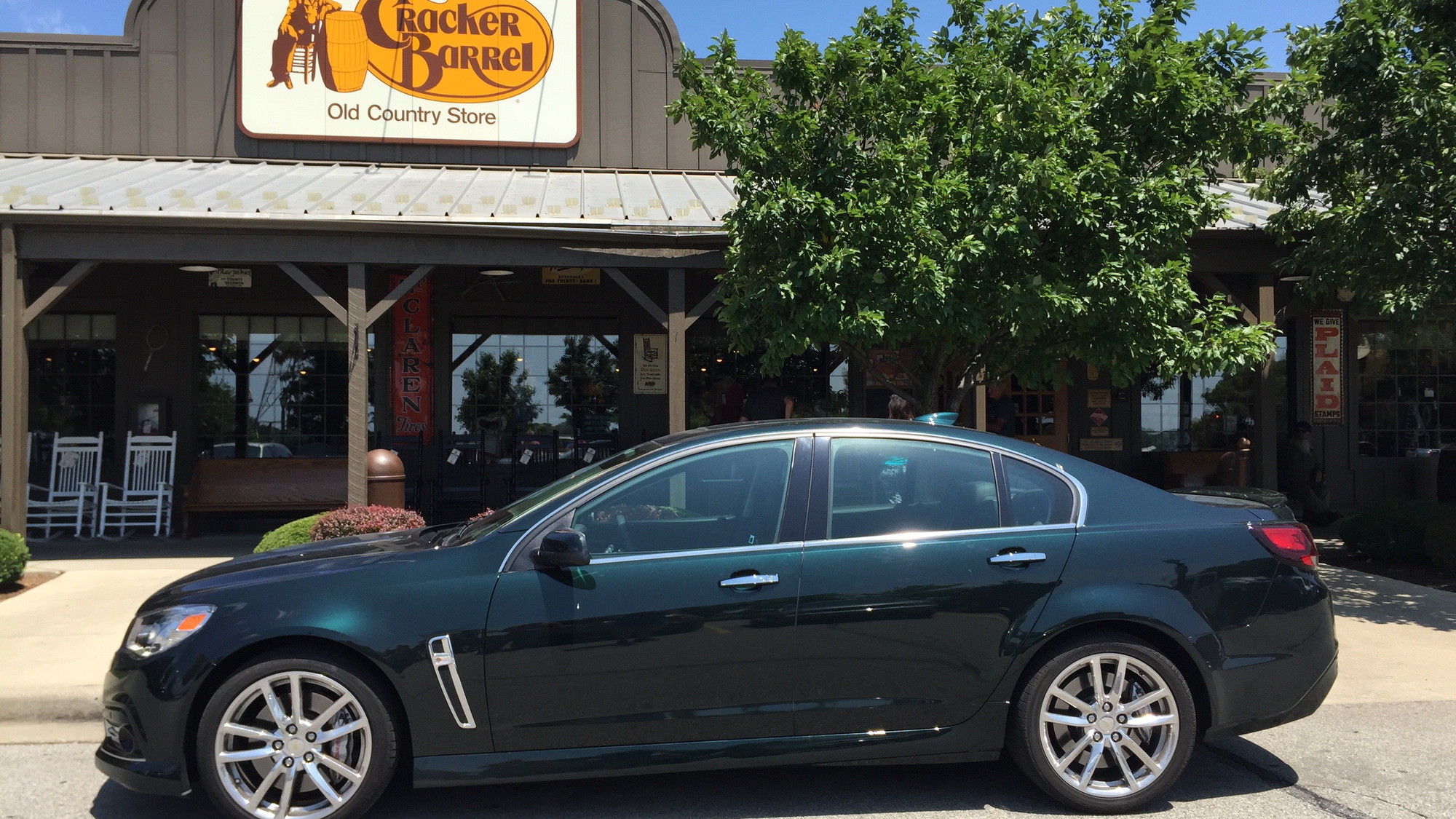 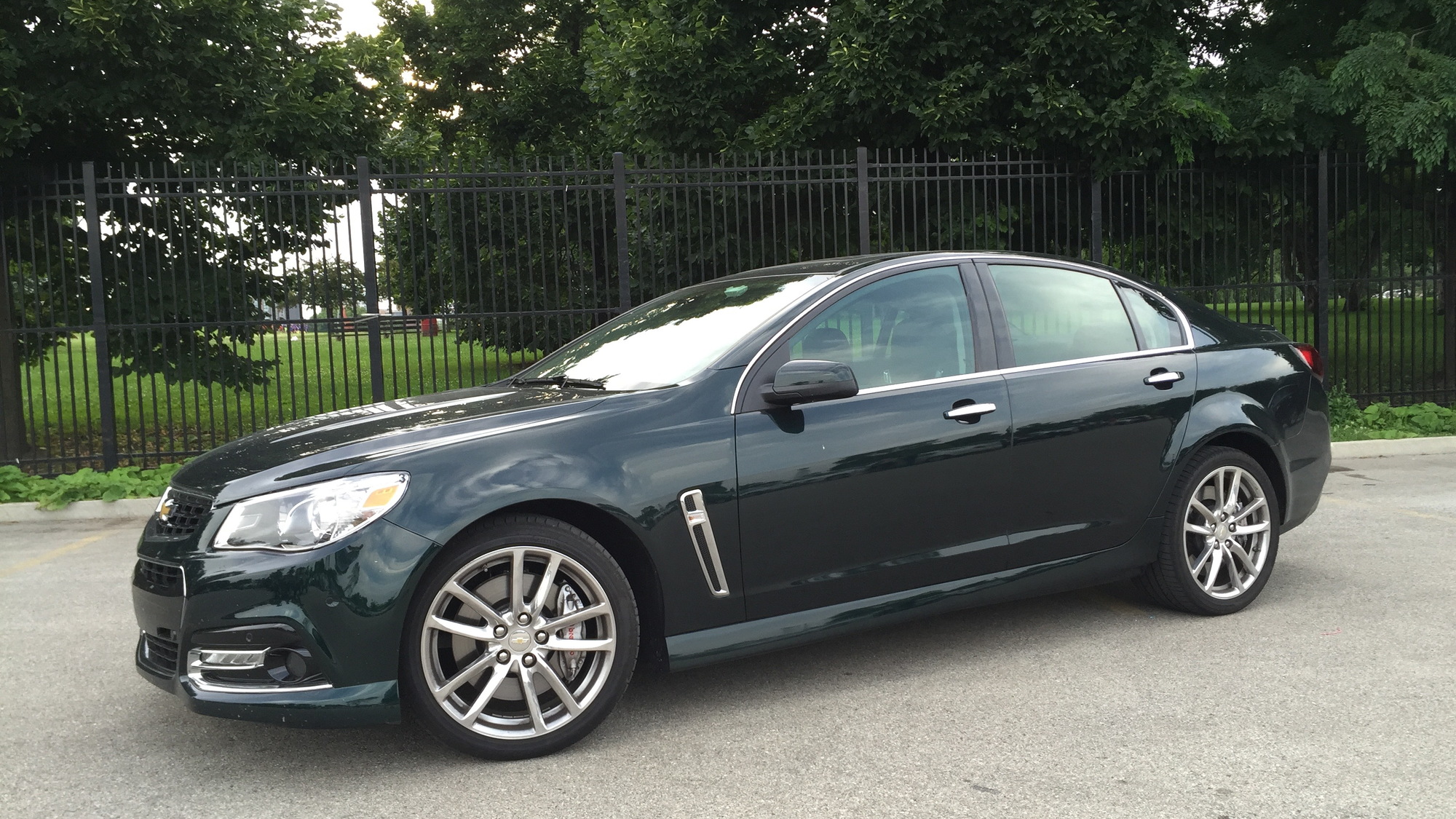 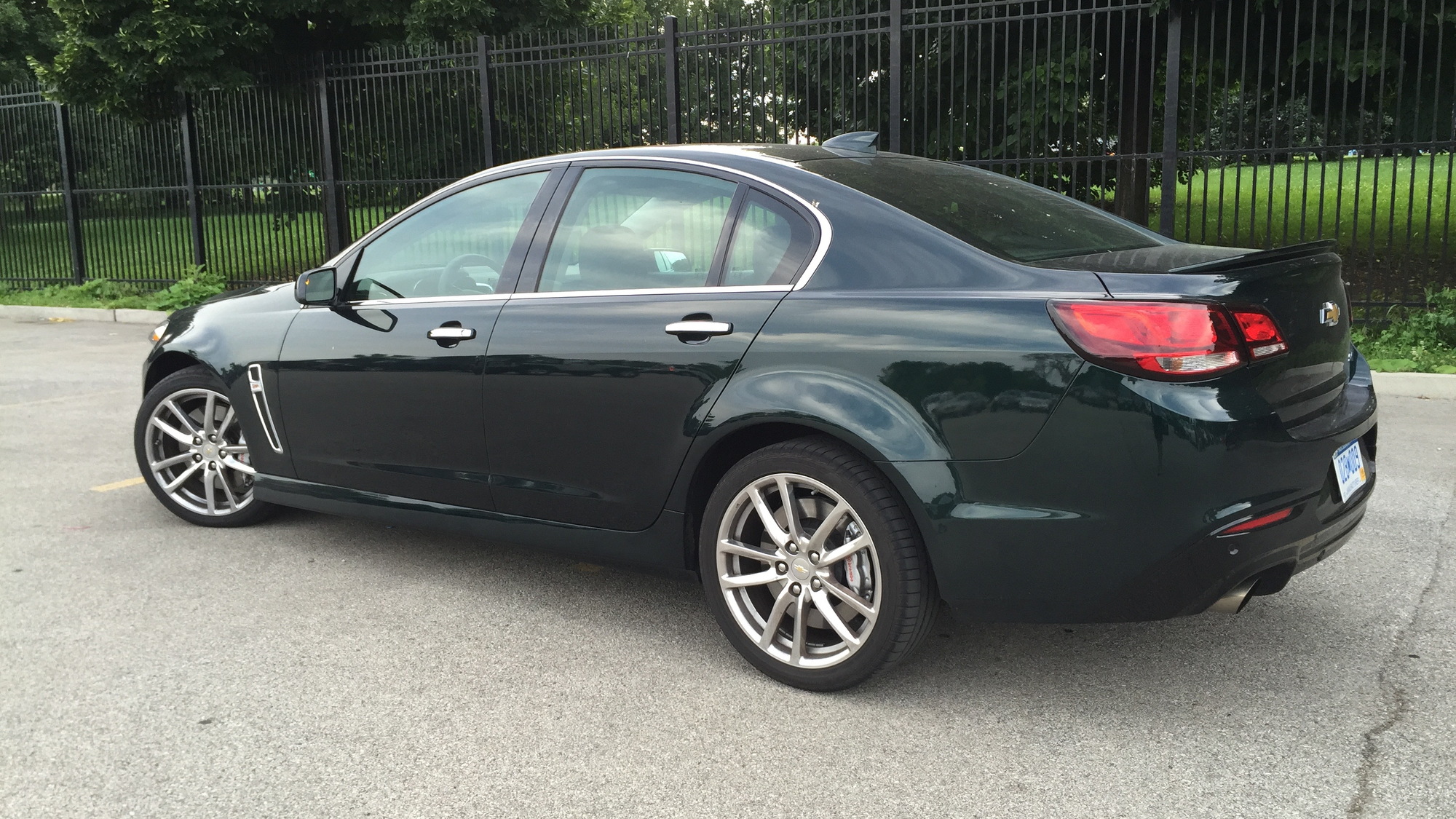 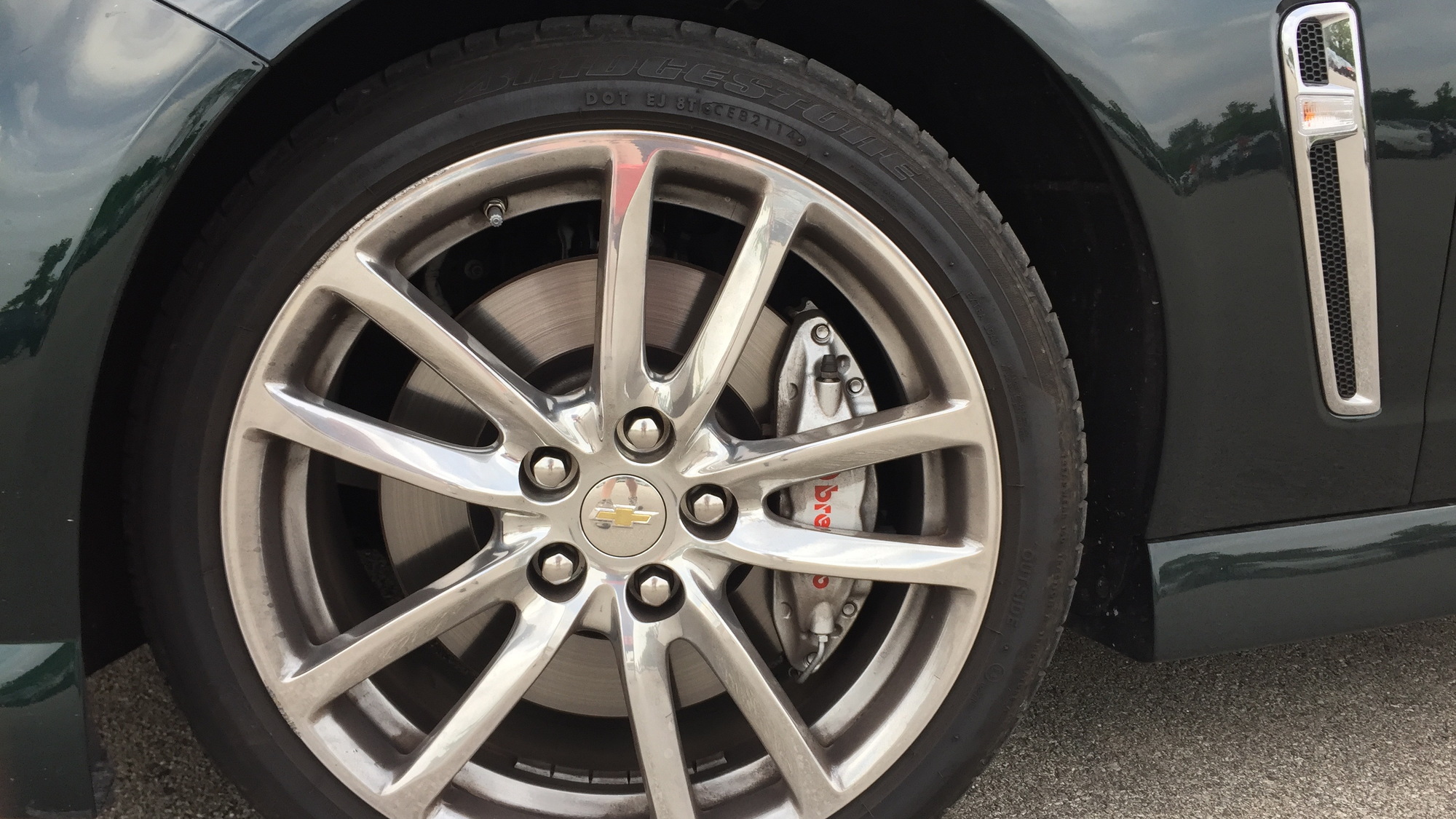 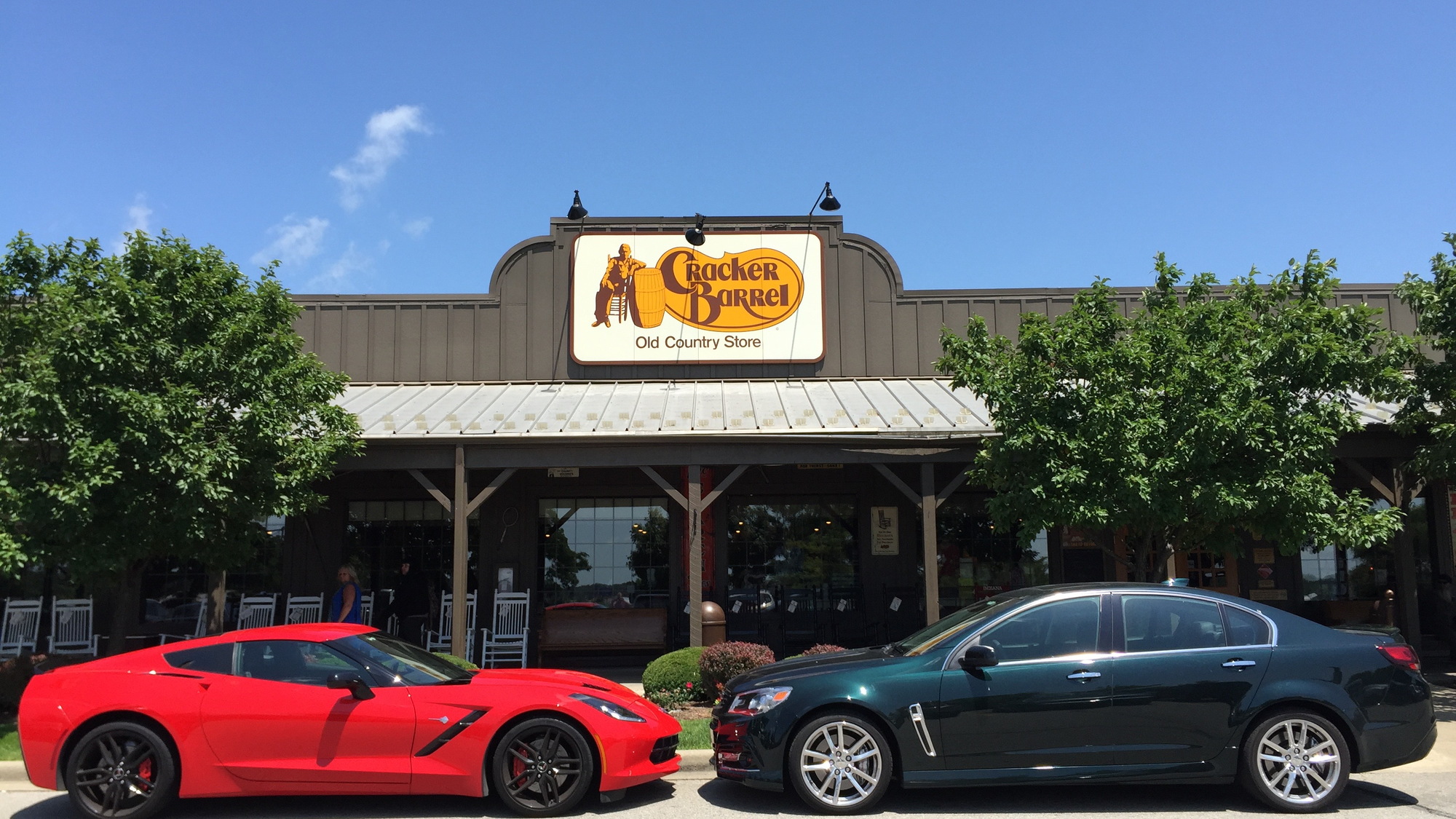 Brought to you by the good folks at Chevrolet, this week's ride has been a 2015 Chevrolet SS. Chevrolet delivered the car so I could make the 600-mile roundtrip from Chicago to Cincinnati to attend the Major League Baseball All-Star Game. Full disclosure: In addition to the car, Chevy also gave me and three other Midwest journalists tickets to the game and hotel rooms to stay the night. The goal was to get the media to produce a series of stories centered around baseball, hot dogs, apple pie, and Chevrolet. Instead, I'll just share some observations after a week in the BowTie's four-door muscle car.

The car I drove was a the updated 2015 model with the new magnetic ride suspension and newly available Tremec six-speed manual transmission. The only option was a $900 sunroof. Total cost: $47,640. Here are my thoughts:

It drives better than it looks. Like the Pontiac G8 before it, the SS is based on an Australian-built Commodore V-8 model. Apparently, they don't concern themselves much with looks in Australia, as the SS could easily be confused for a Malibu. Heck, it doesn't even have as much style as the Impala. With 415 horsepower under the hood, maybe that's a good thing. This car is a sleeper.

It drives much better than a Malibu, though. The V-8 issues a demure rumble that becomes more pronounced as you accelerate, then pops and crackles in a muted manner when you let off. While it's a large sedan, it drives smaller than its size, turning in sharply and gathering its weight quickly to change directions. This car is far more agile than its closest competitor, the Dodge Charger SRT. The newly standard Magnetic Ride Control suspension also does a fairly good job of filtering out the bumps in the base Tour mode, though the default setting is still a bit firm. The Sport and Performance modes stiffen up the ride further, but also make the car react quicker to steering inputs. My one major complaint is the abundance of road noise. This car could use more sound insulation

It's not very fuel efficient. On our 637-mile stint in the SS we averaged 21 mpg overall, with the vast majority of those miles between 70 and 80 mph on the highway. A Corvette that we drove down with averaged 29 mpg during the highway stretches, proving General Motors Company [NYSE:GM] engineers can do better. They just chose not to in the SS, which carries EPA ratings of 15/21 mpg city/highway and 17 mpg combined.

The interior is a mixed bag. GM can do good interiors but the SS is lacking here, too. Yes, there are some nice leathers and Alcantara inserts, but they are draped over some of the cheaper plastics you'll find in a car costing more than $40,000. Otherwise, the seats proved to be comfortable for a long trip, space is plentiful, and the SS's unique version of the Chevrolet MyLink infotainment system is easy to control.

I could live with it as my everyday driver. To quote Cracker's David Lowery, "I don't know what the world may need, but a V-8 engine's a good start for me." And this V-8 is sweet. Add to the mix a six-speed manual transmission and room for five and I'm sold. The manual takes some time to get used to. Gear engagement is high in the clutch travel, making it hard to be smooth and easy to stall, which I did twice. After that, however, I liked the manual's smooth throws and the feeling of powertrain engagement it delivers. There is a little too much road noise for my taste and I'd like more style, but the SS is a fun, fast sedan that I would like to drive on a regular basis. Too bad it's only available for a short time (Australian production ends in 2017) and in limited numbers.

For more on the Chevy SS, read our first drive of the 2014 model.