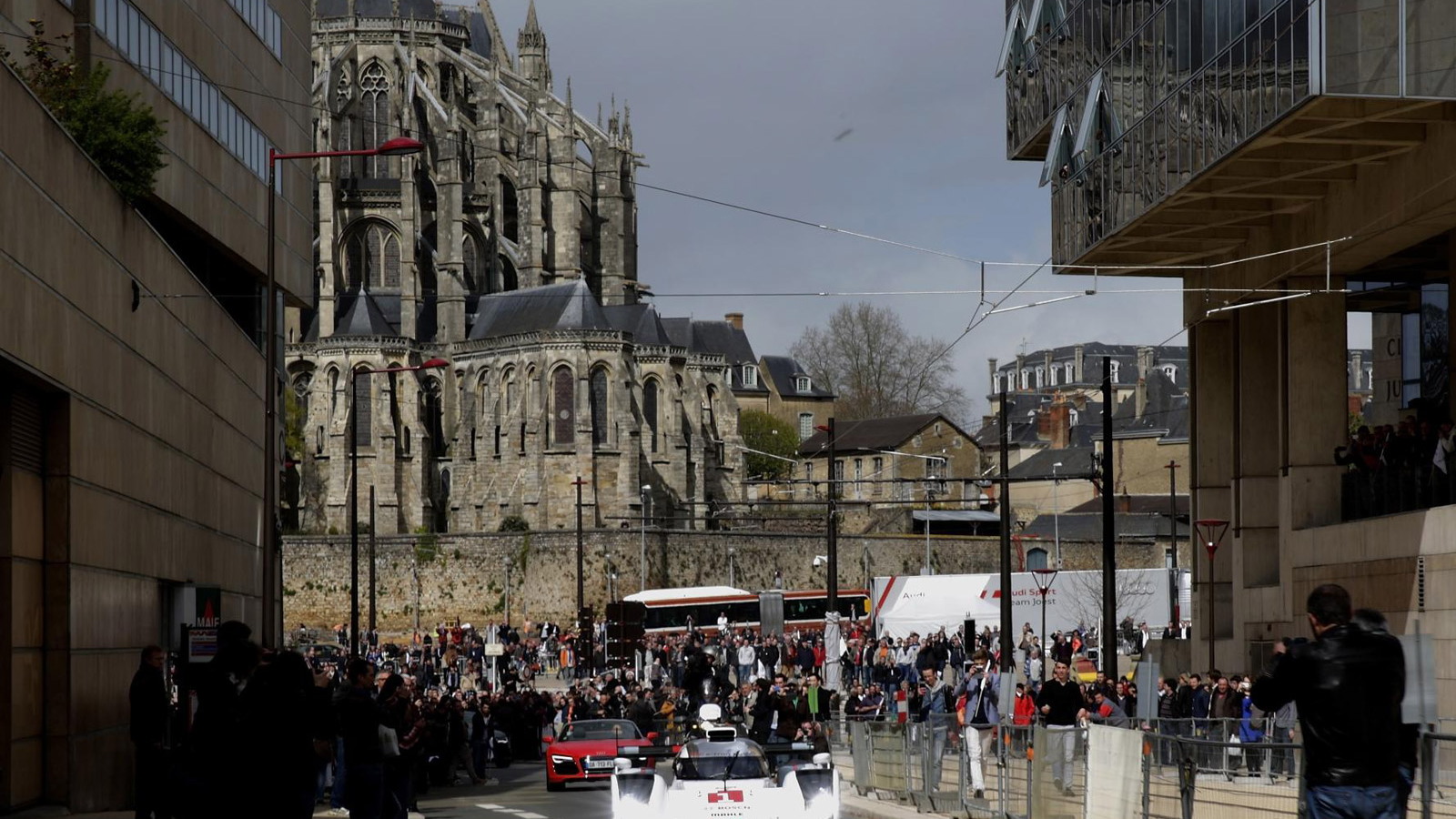 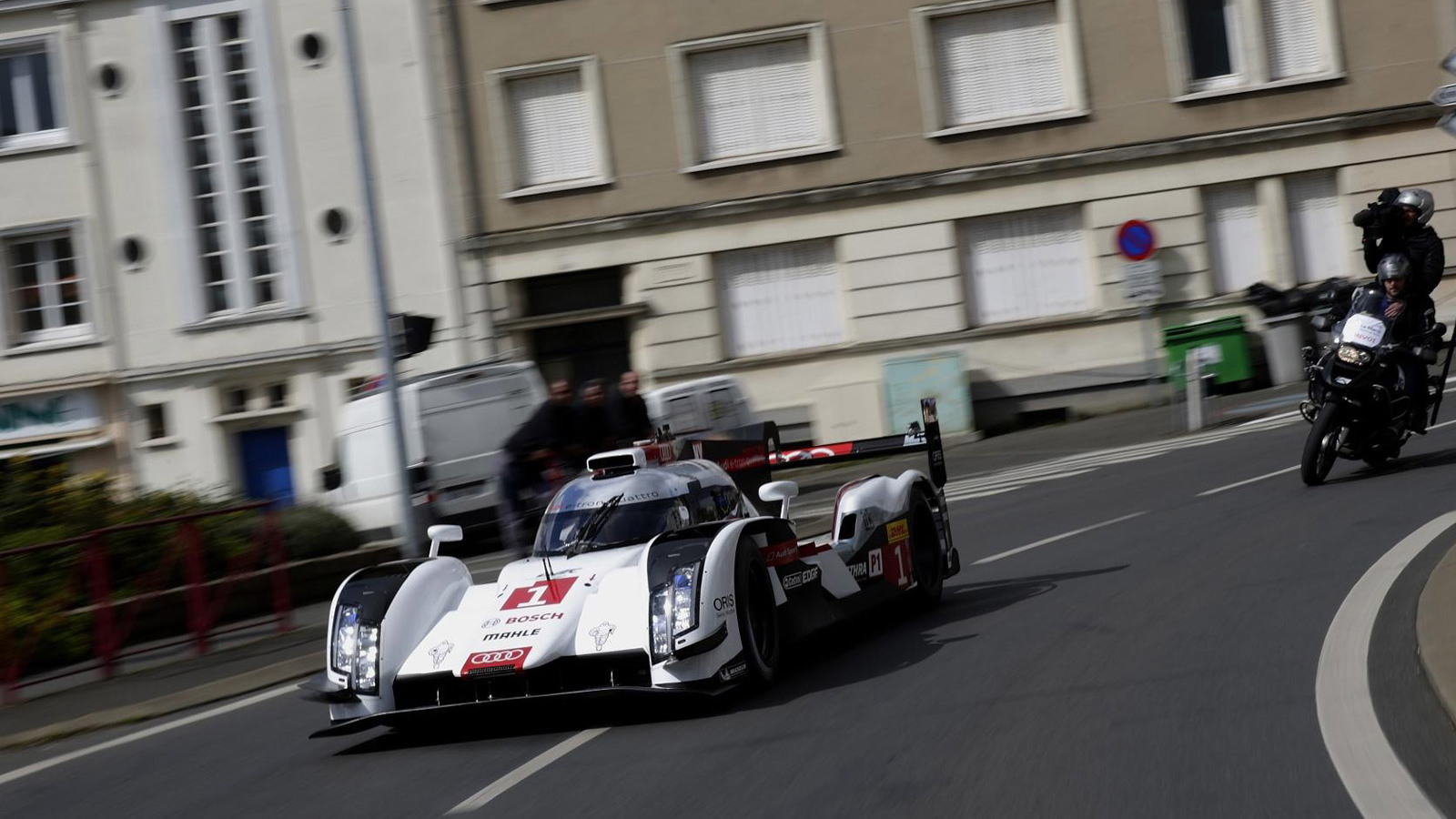 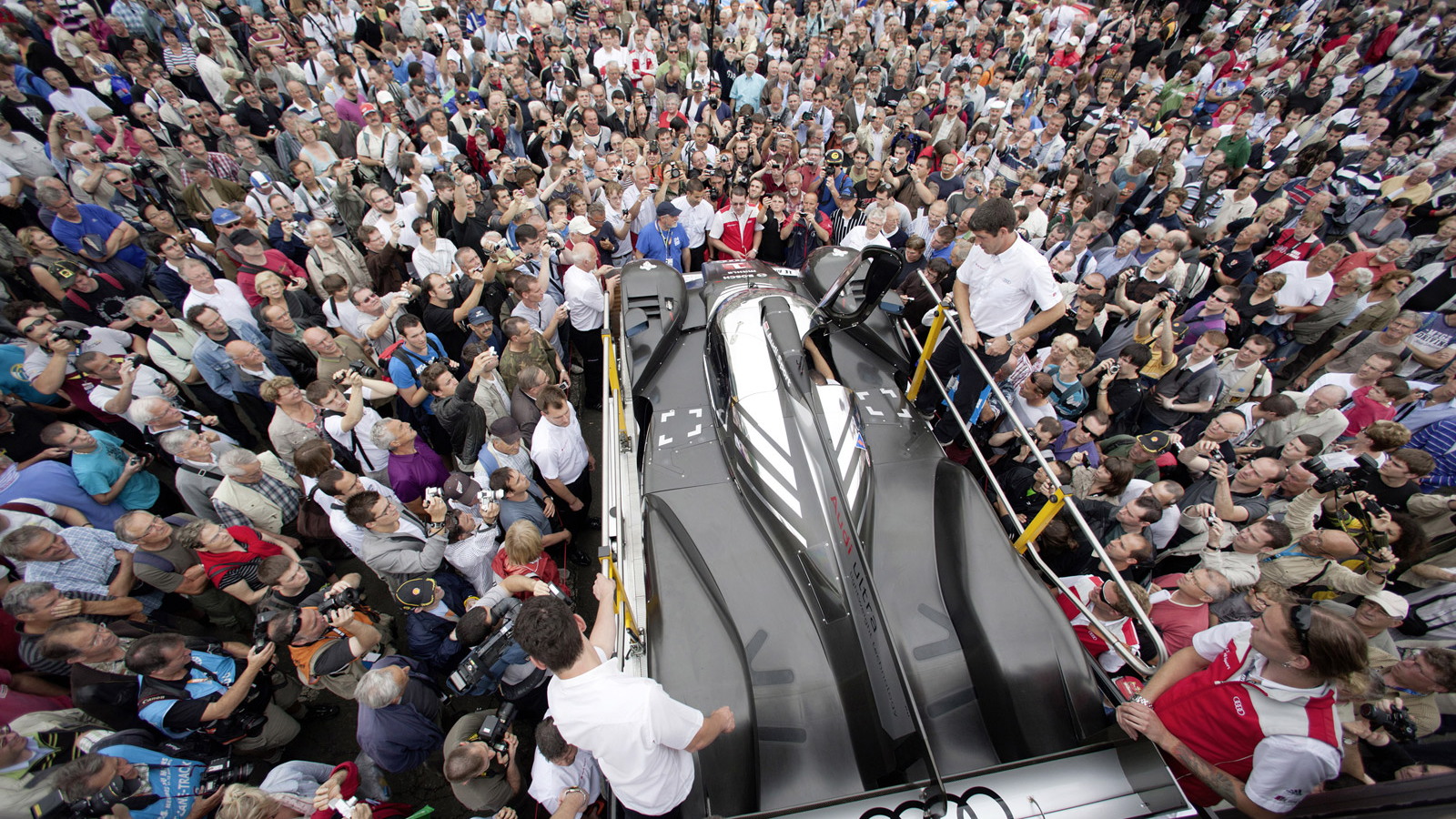 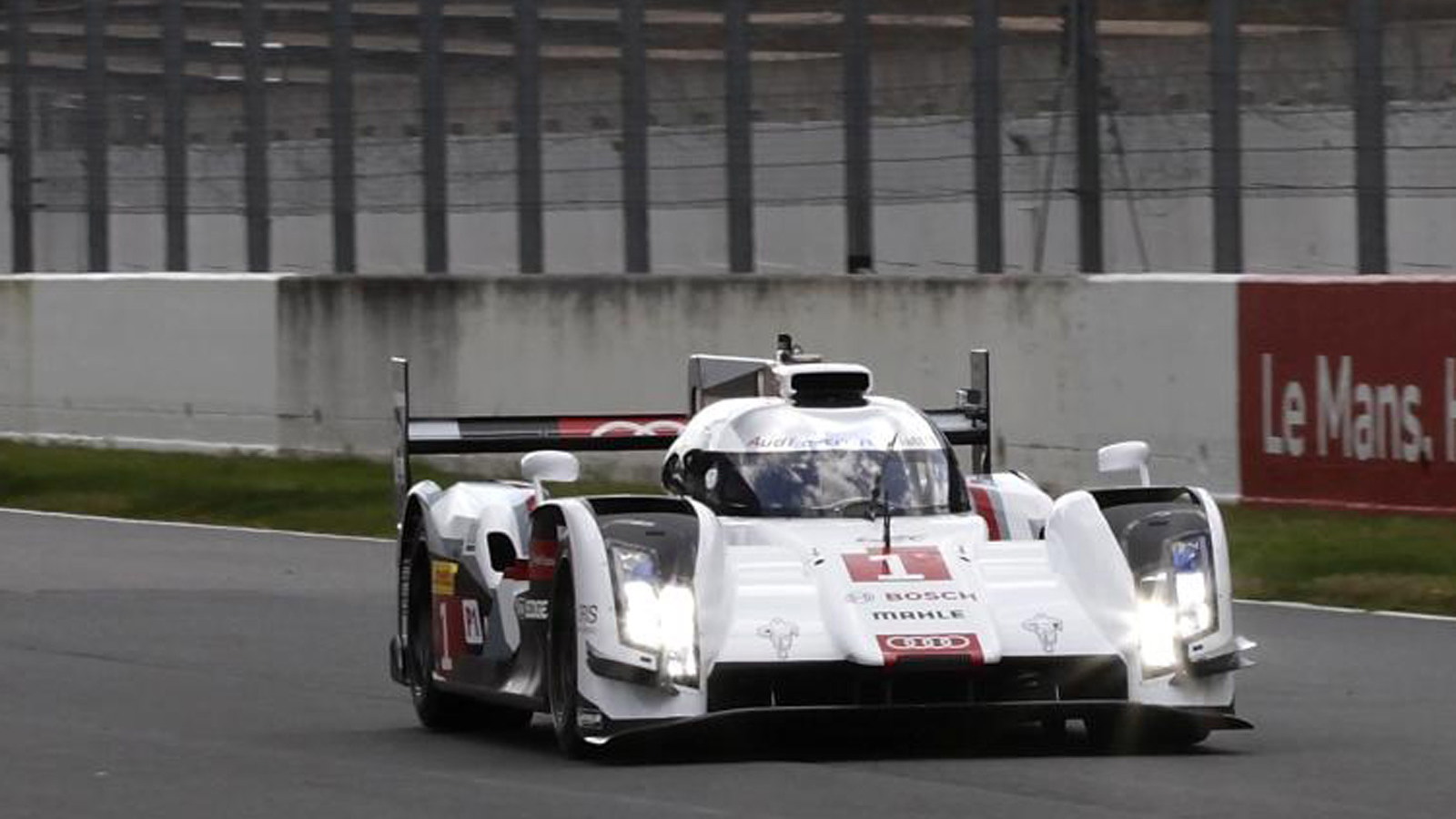 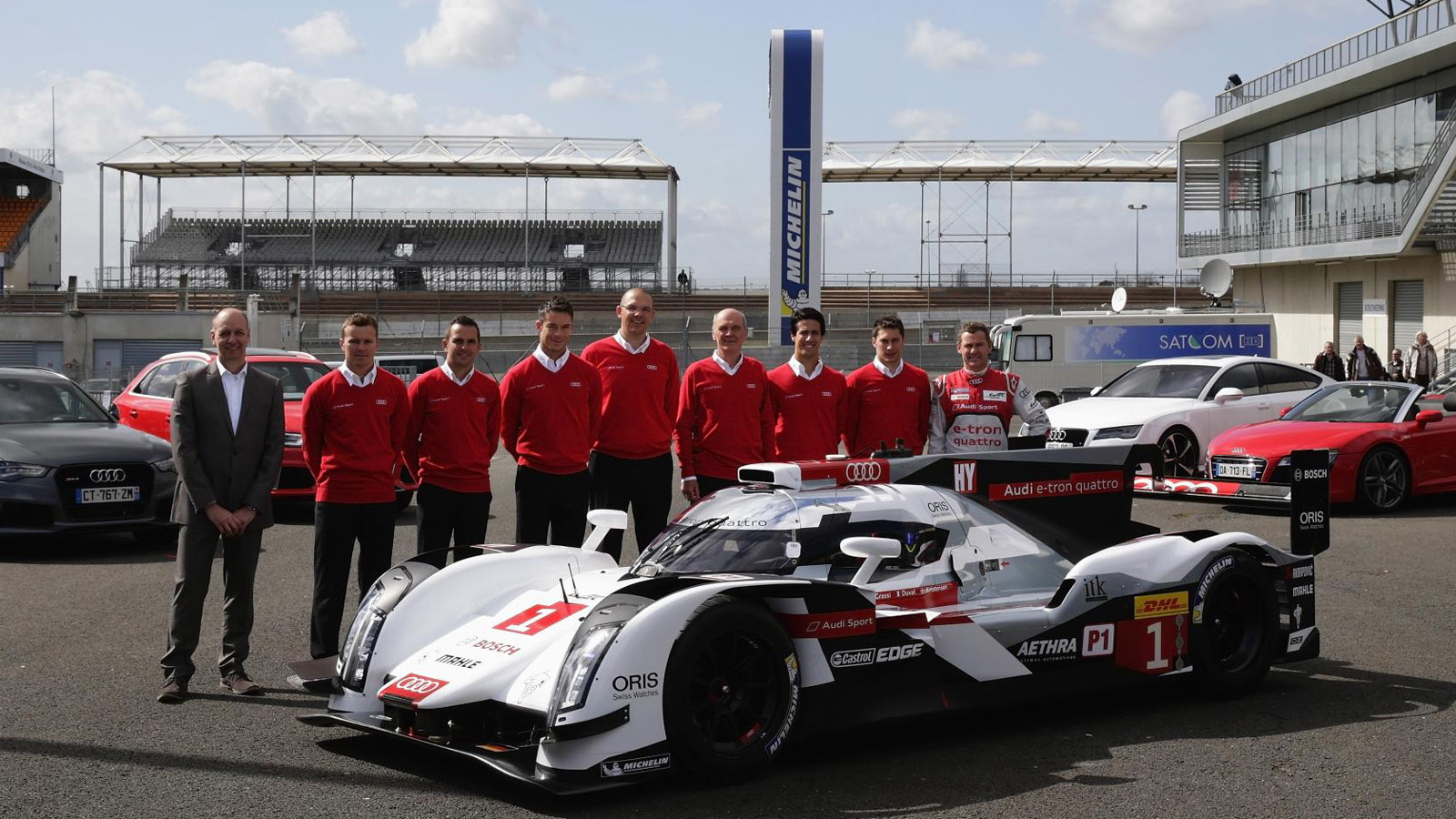 10
photos
Audi will field an updated version of its multiple race-winning R18 e-tron quattro Le Mans prototype in the 2014 World Endurance Championship and the series’ highlight, the 24 Hours of Le Mans. The 2014-spec car was shown for the first time late last year but now it’s been revealed in its full racing livery--not on a race track but on the streets of the French city of Le Mans.

Aside from the unusual drive, which brought back memories of a Le Mans era from the distant past when the drivers would arrive in their own race cars, Audi surprised the public with a new livery of the Le Mans car. The colors include white, silver, red and black.

Though it may look similar to the 2013 R18 e-tron quattro that helped Kristensen and fellow Audi drivers Allan McNish and Loïc Duval secure the WEC title last year, there are some substantial differences. The new rules for WEC in 2014 are focused on efficiency, and require the use of even more advanced fuel-saving technology such as hybrid drive systems and diesel engines.

The 2014 R18 e-tron quattro’s drivetrain consists of a turbodiesel V-6 which displaces 4.0 liters, up from the previous car’s 3.7-liter capacity, and an electric motor-generator. The diesel mill powers the rear wheels while the electric motor powers the front pair, creating a ‘through-the-road’ hybrid all-wheel-drive system, hence the “e-tron quattro” tag in the car’s name.

For energy regeneration, Audi decided to compete in the class of up to two megajoules of regeneration. Most of the regenerated energy is captured via the motor-generator at the front axle and is stored in a flywheel energy storage system. Additional energy is regenerated from the exhaust gases, via the turbocharger. This energy is converted into electricity and also fed to the flywheel storage system, but it can be sent back to the turbo to help spool its turbine up quicker.

Testing of the 2014 R18 e-tron quattro will take place during WEC official testing at Le Castellet in France this weekend. The first round of the 2014 WEC season is the 6 Hours of Silverstone in the U.K. on April 20. Going up against the Audi in the premier LMP1-H class will be Porsche’s 919 Hybrid and Toyota’s TS040 Hybrid.