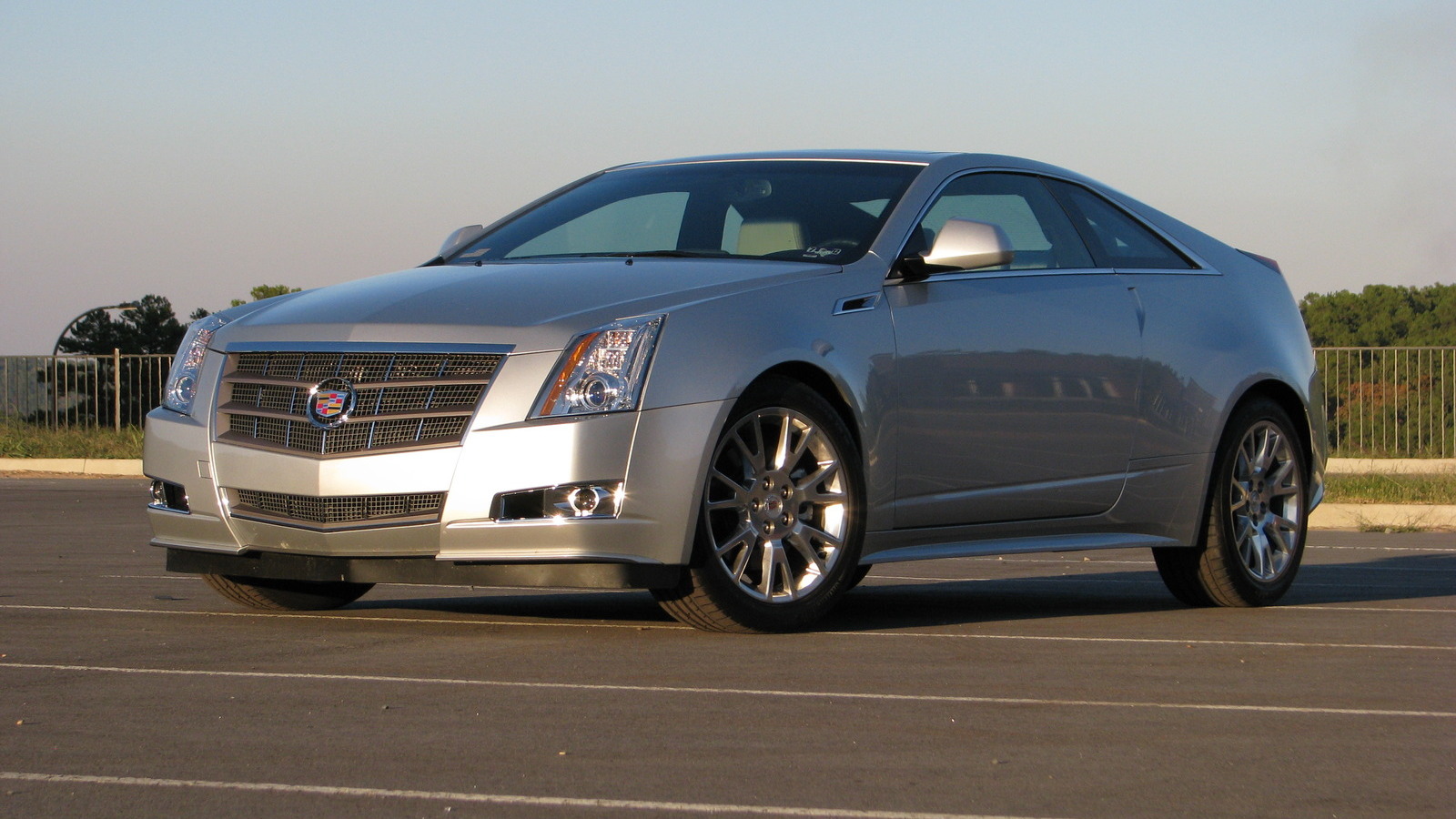 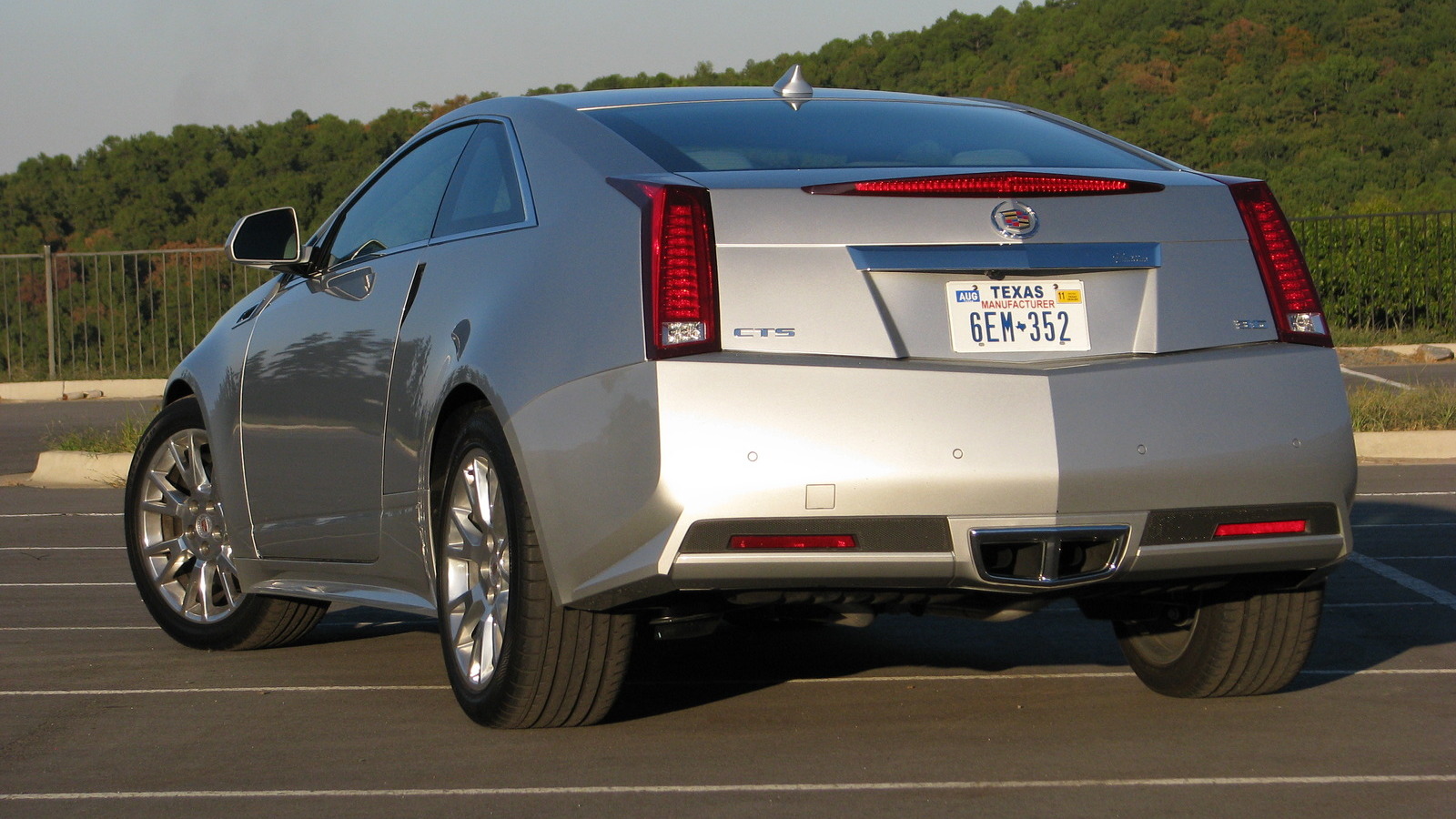 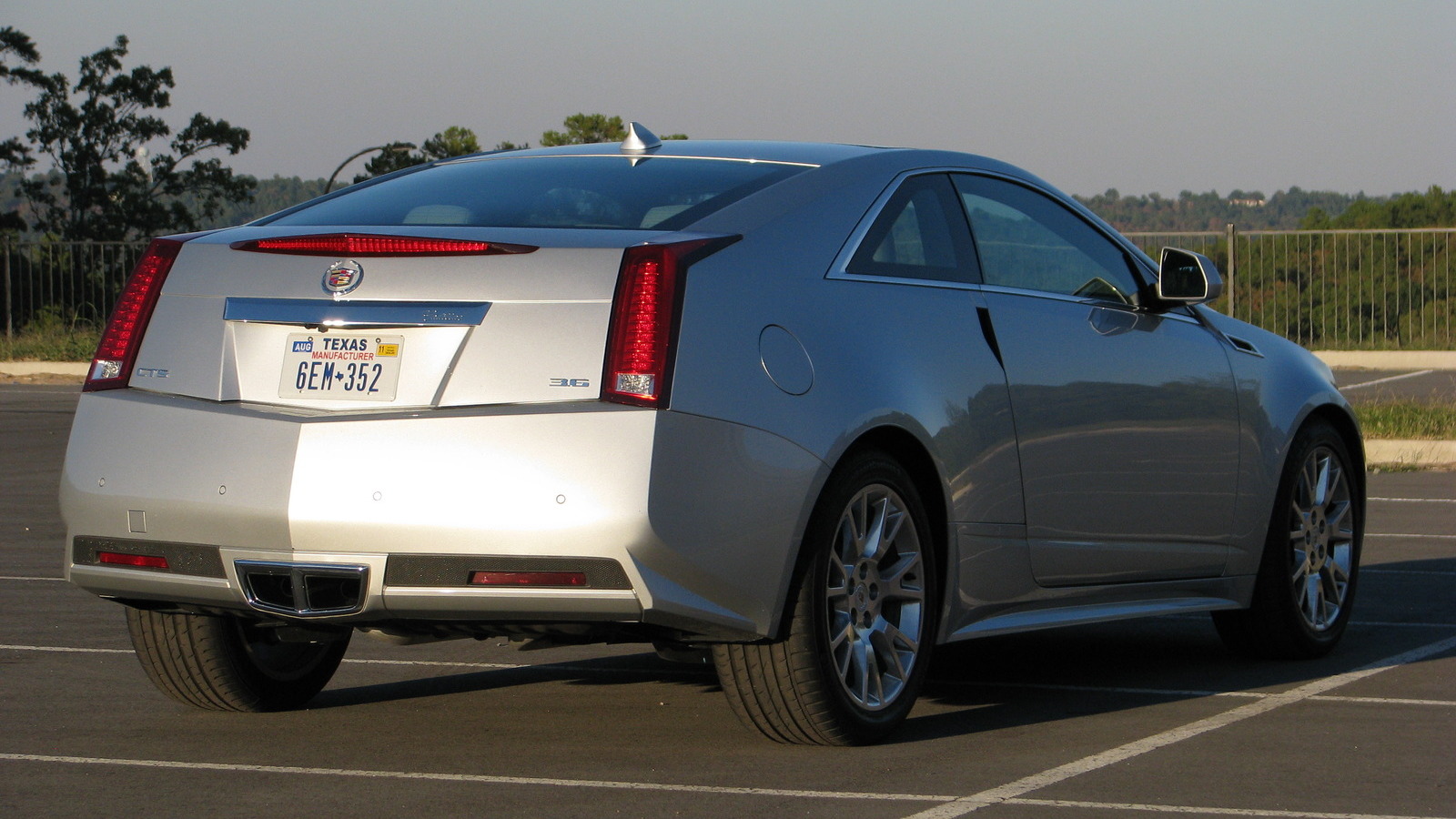 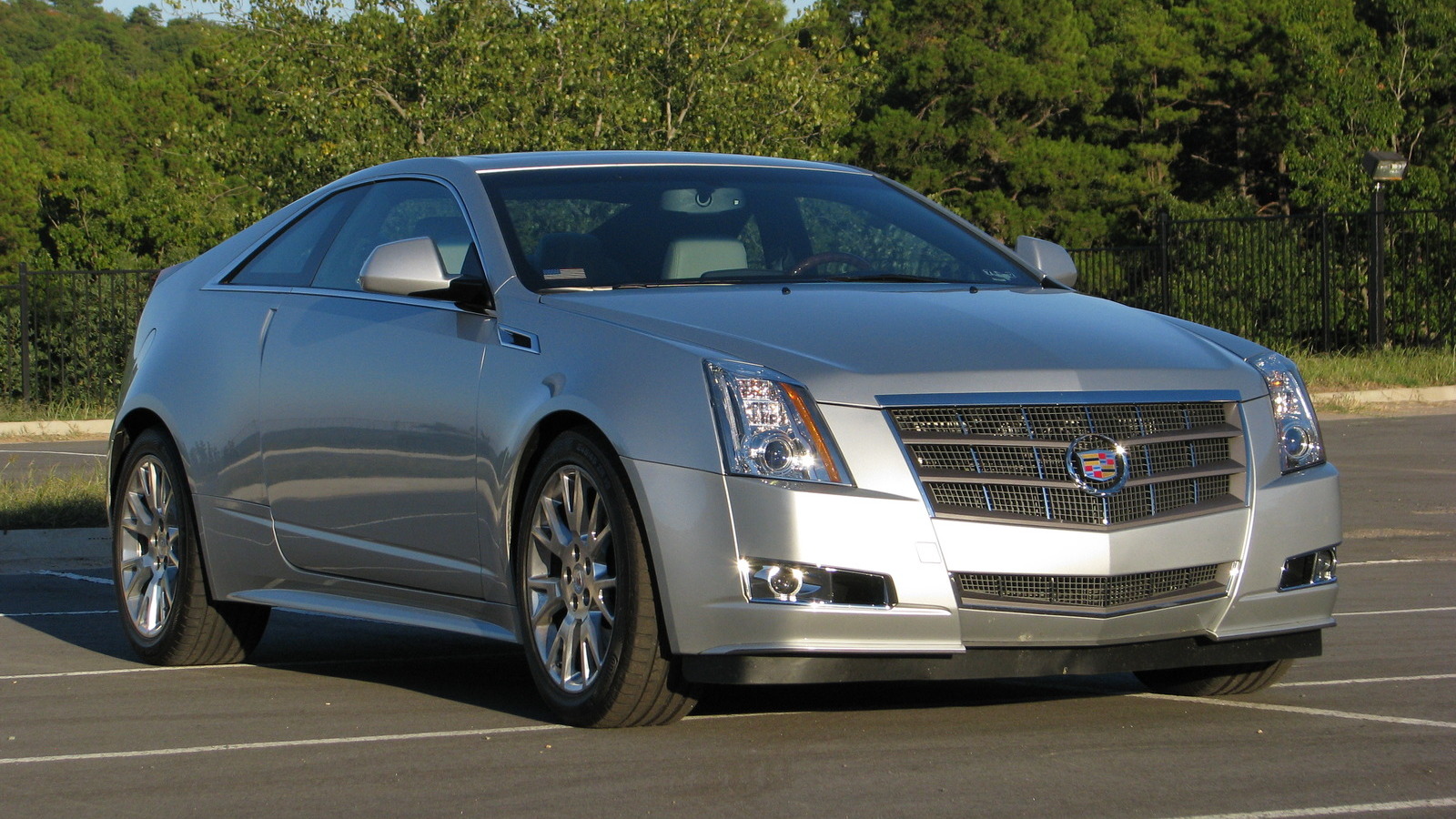 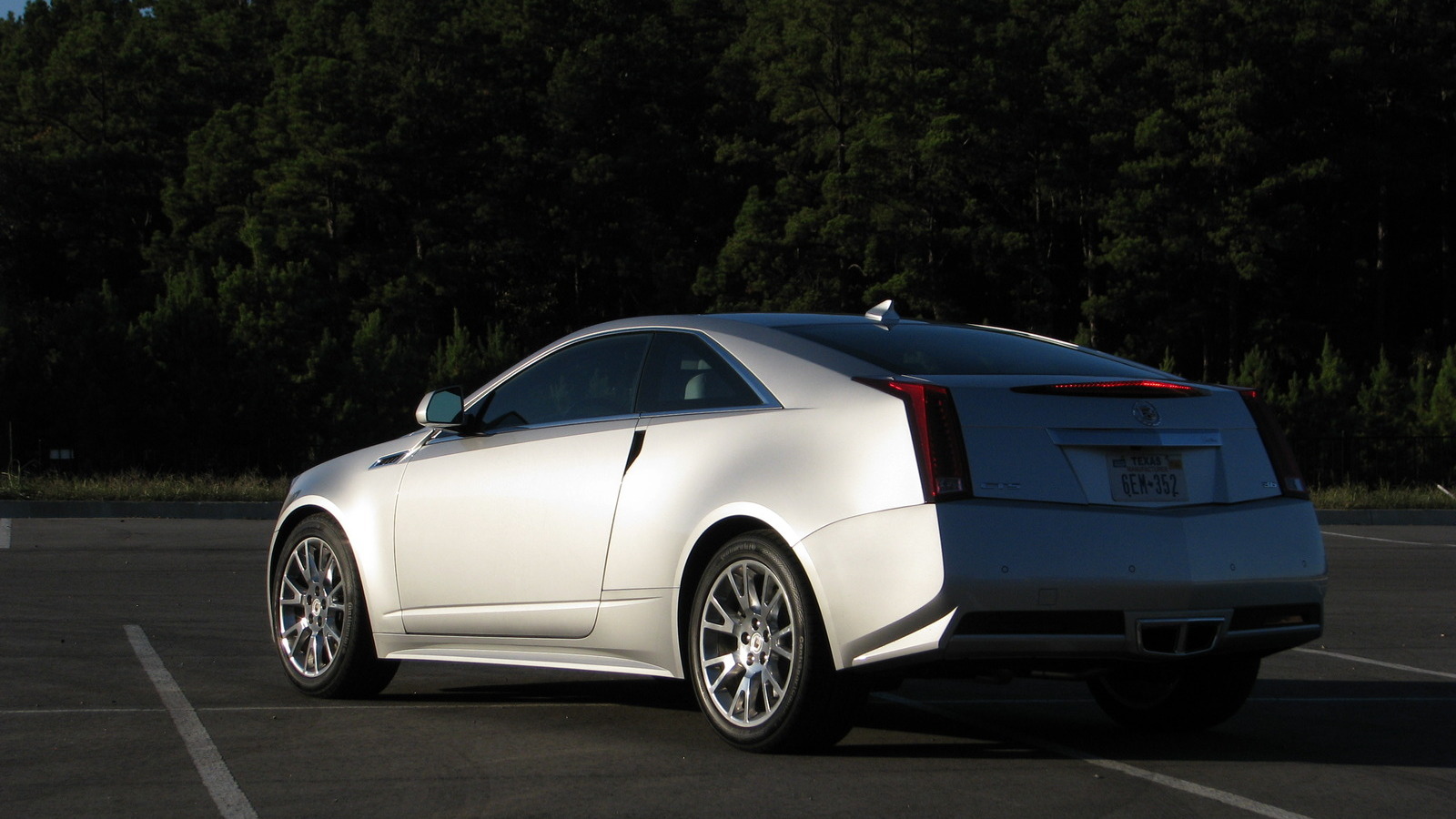 I've had several encounters with the 2011 Cadillac CTS Coupe before, including the press launch in California. But this past week with the most visually striking member of the standard CTS lineup shed new light on the car.

Living with a car in the real world is a different experience from driving it during an event. The first few hours don't always match up with what it's like to deal with a car and all its features and faults over a longer haul. So how does the CTS Coupe hold up to the rigors of the daily grind? Very well, actually.

Performance and Handling
Being a two-door, the Coupe projects a sportier image than its sedan and wagon counterparts. Despite being very similar, it gets its own tweaks to suspension, track, and tire width that make it a bit of a different creature.

First off, it handles very well for a car its size. It tends toward understeer when pushed very hard--a predictable and safe dynamic most people can deal with. But you have to push it very hard indeed to get there. Driven normally, or even with some spirit, the CTS Coupe just feels planted.

Steering weight is still a bit odd and unpredictable--at low speeds, it's almost floaty, but at highway speeds it grows rather heavy. Knowing how the wheel is going to react to inputs in any given scenario is a matter of conditioning rather than intuition.

The 306-horsepower, 3.6-liter direct-injected six-cylinder is eager to please, handled respectably by the six-speed automatic transmission, and offers plenty of oomph for freeway maneuvers. As always we could use a little more than plenty, but that's what the CTS-V is for.

The cockpit of the CTS Coupe is a very nice place to be. Soft-touch materials, grippy rubber-coated steering wheel-mounted shift paddles for the six-speed auto 'box, and cut-and-sew leather give a legitimately premium feel. Ergonomics on the controls are mostly good, though you'll have to work the trip meter blind if you want to see your instant MPGs while cruising down the road.

Cupholders, on the other hand, while not plentiful, are well-located to be out of the way yet accessible, and the center-console cubby has a two-level system that makes it easy to temporarily stow phones and other gadgets without losing them in a mire of cords, french fries, and darkness.

Back-seat room is generous, which isn't a surprise given the CTS Coupe has the same wheelbase as the sedan. Headroom is at a bit of a premium, but as long as taller rear-seaters keep their noggins in the niche carved into the ceiling, they'll be (mostly) fine. Upholstery all around feels quality. It's not glove-soft leather, but it's not the hard chem-treated stuff found in "aspirational" cars, either.

Speaking of seats, though, we do have to point out the one real sore spot of the CTS line: the front seats. Flat, too hard, and with a bump midway up the back that's more annoying than uncomfortable, the seats really let down what is otherwise a great car.

That bump in the seats is there due to a retrofit to the original seat design to allow room for the active headrest, and an improved design is in the works according to Cadillac. If you ask us, it can't come too soon. The worst part is that the seats are only so noticeable because everything is executed so well. The cabin is everything you'd expect from a $40,000-$50,000 luxury car. Panel fit isn't quite as good as you'll get in a BMW or an Audi, but it's still good. The look is original, and though a bit busy, tasteful.

The Daily Grind
Living with the CTS Coupe is a unique experience, even for someone that drives a different new car on a weekly basis. Drive the wedge-shaped, angular coupe to your local burger joint, and you'll probably get stopped on the way in and the way out by people complimenting your "nice little hot rod" (actual words from one encounter) or asking what kind of car it is.

You don't get that with an Acura, Lexus, or even the Germans. If you're a glutton for attention, the CTS Coupe is a buffet. And for many, that kind of attention makes up for a world of troubles.

The CTS Coupe really doesn't have many troubles, though. There's the seat issue, of course, but you can get used to it after a few days--even though you'll still wish they were better. There's the too-intrusive center tunnel that plagues all CTS models if you're cursed with the long legs of the six-footer club. And there's the long doors that make ingress and egress tough in tight parking spots. But beyond that, the CTS Coupe is a fantastic daily driver.

Quiet, with just the right amount of growl when you open it up. Comfortable, with firm-but-not-harsh suspension feel over beleaguered city streets. Efficient, for a fairly large luxury four-seater, scoring in the low 20 mpg range around town and mid-to-upper 20s on the highway. Classy, from the look to the feel. Roomy, both inside and in the trunk, though the small opening and oddly-shaped lid will make getting larger items in a bit of a study in tesselation.

At The End Of The Week
Attention-getting style, solid driving dynamics, quality materials, and a very competitive price put the CTS Coupe on level-or-better footing with most of the competition. If you're looking for something that breaks the cookie-cutter mold of the Germans and Japanese, the CTS Coupe could be your answer.

If , on the other hand, you're wondering why you'd buy this instead of the sedan, you're missing the point altogether. The reason why is because.