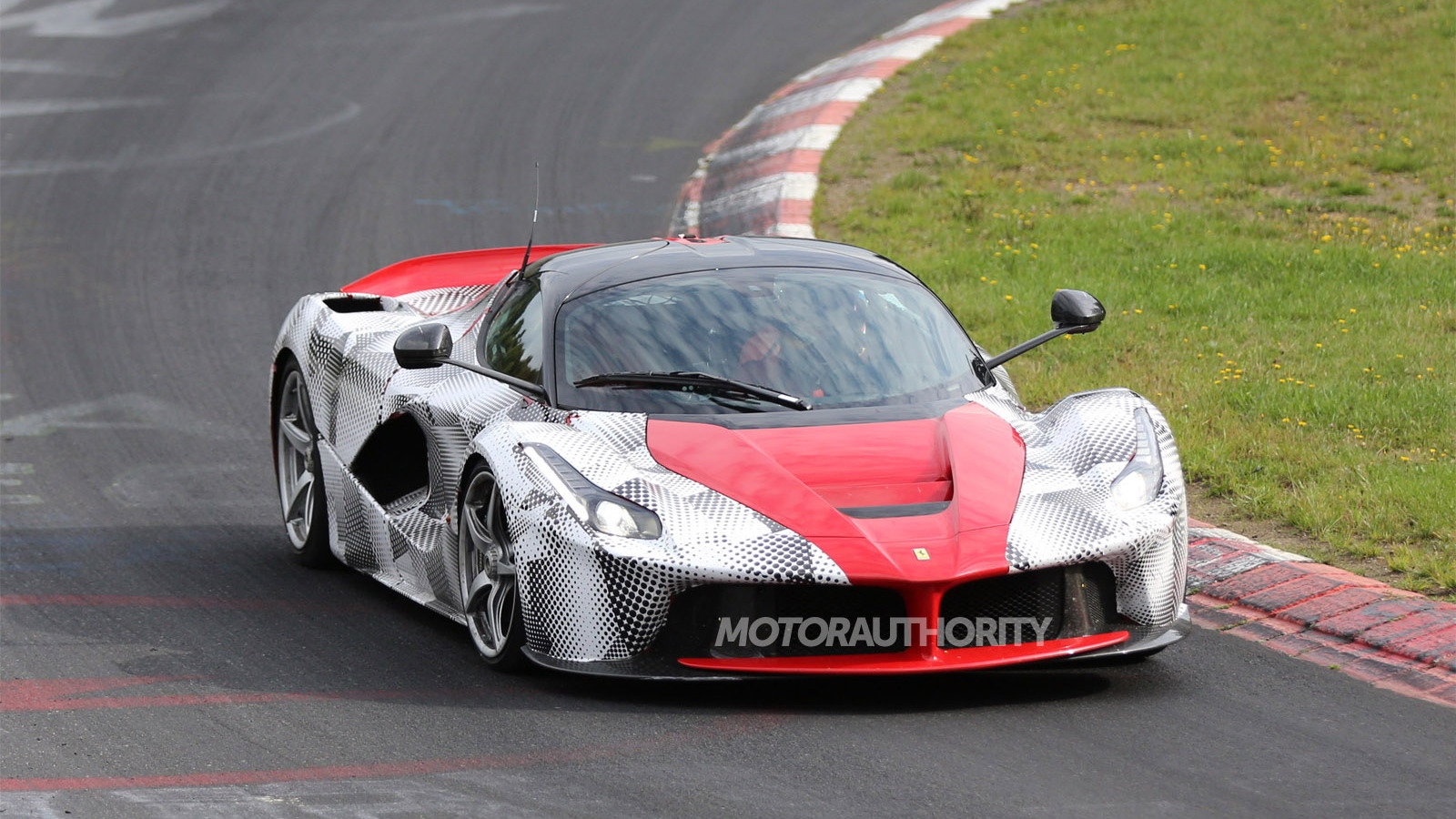 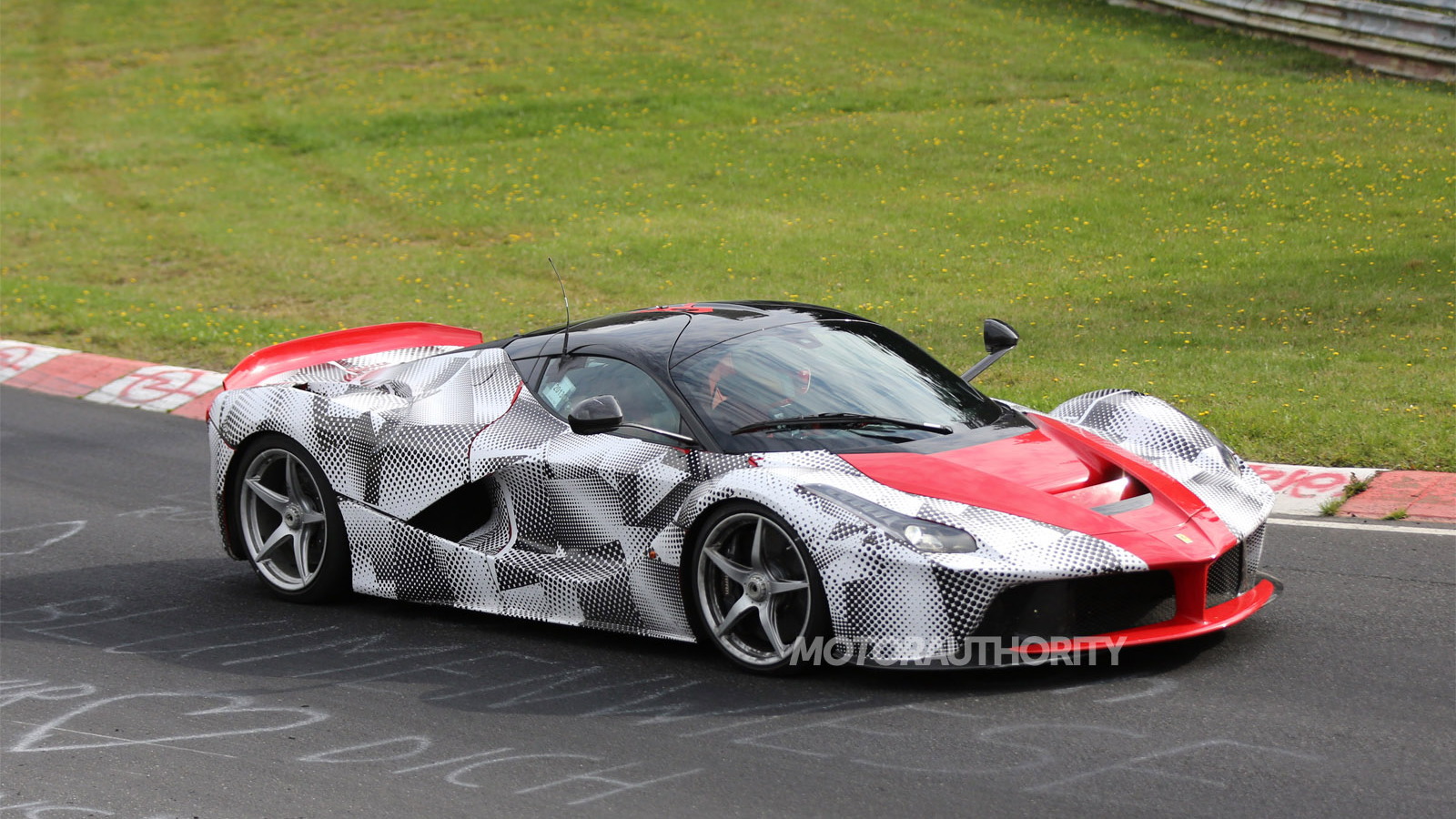 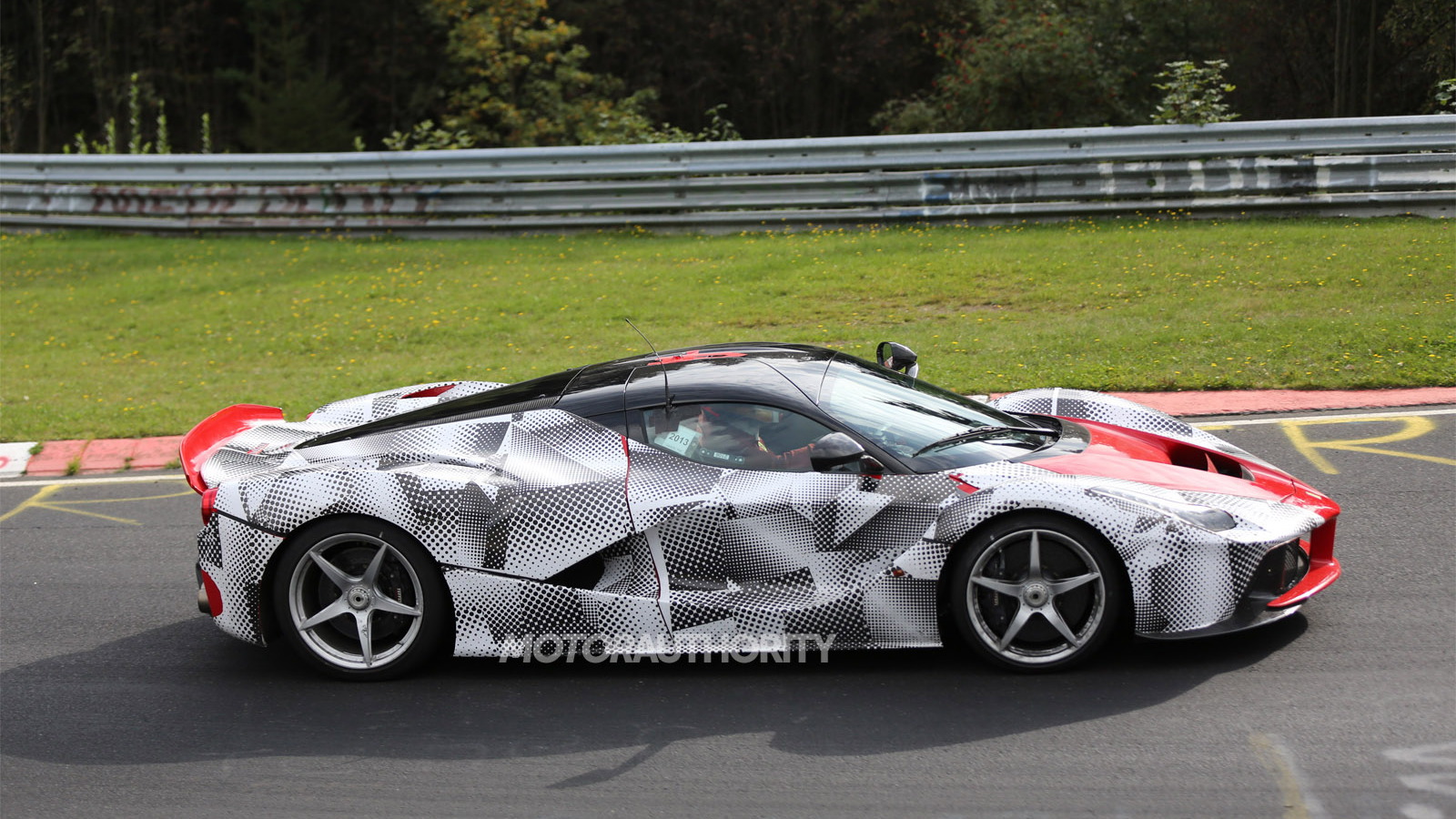 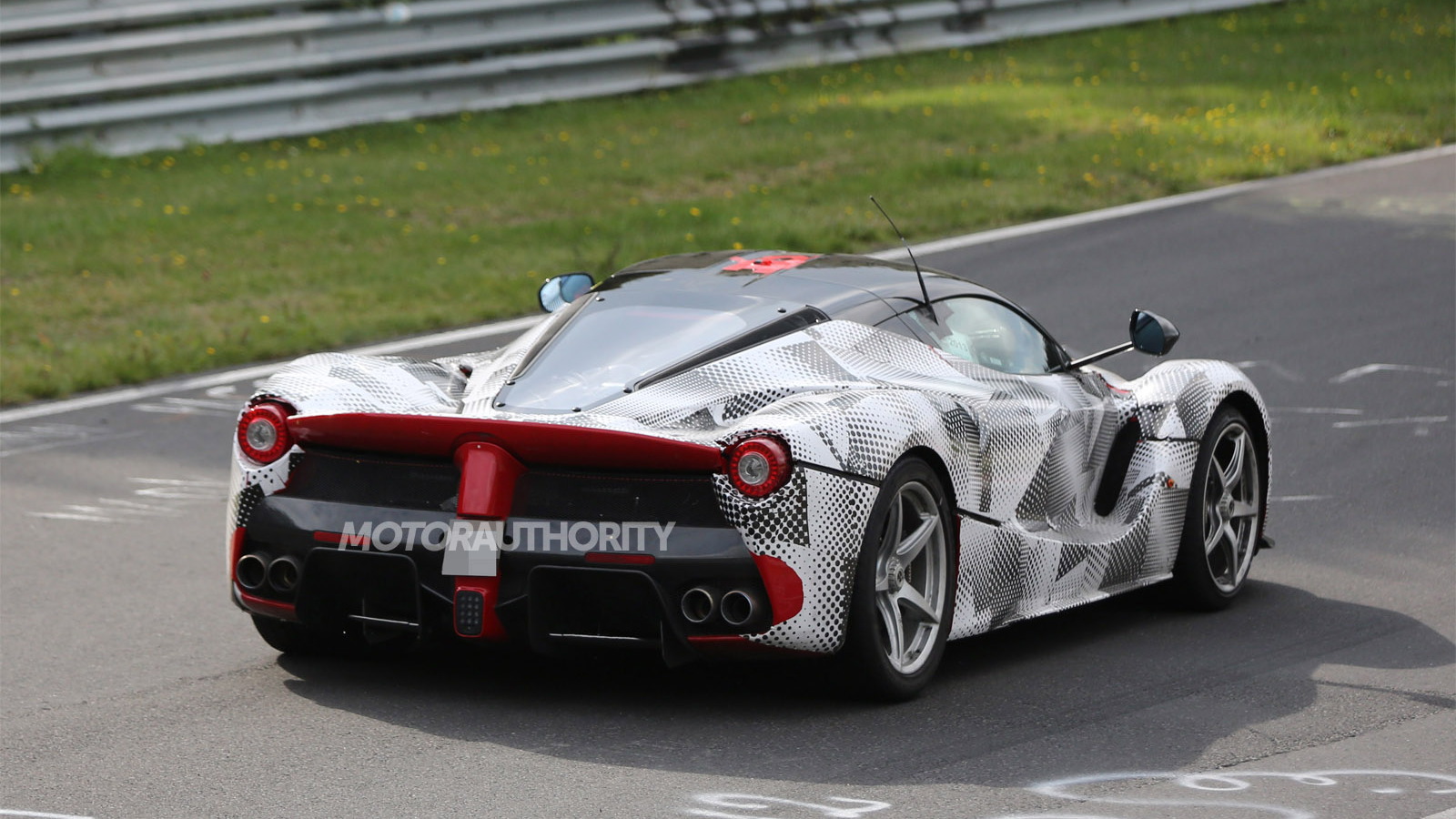 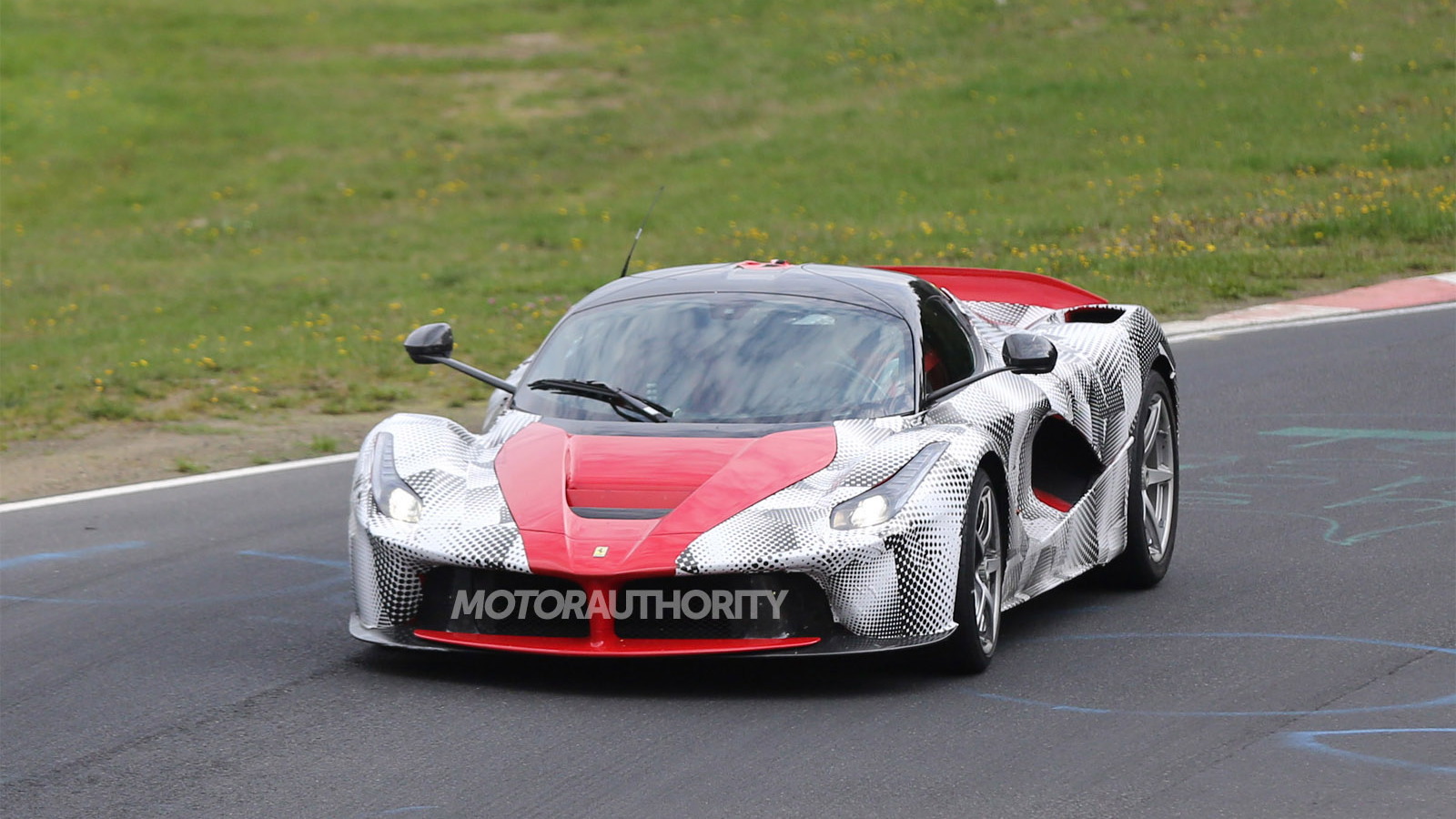 22
photos
No matter which of the hot new trio of hybrid hypercars you're most infatuated with, the Ferrari LaFerrari, McLaren P1 or Porsche 918 Spyder, you have to admit they're all massively impressive machines. And unlike most hybrids, this group sounds pretty great--especially the LaFerrari. This video shows a prototype being put through its paces at Germany’s Nürburgring circuit, where the car has been testing on and off for the past couple of months.

In case you have forgotten, Ferrari said the LaFerrari will reach 60 mph in under 3.0 seconds, pass 186 mph in just 15 seconds and go on to reach a final top speed in excess of 217 mph. Ferrari also boasted a lap time of its Fiorano test track of less than 1:20, which is 5.0 seconds quicker than the Enzo and 3.0 seconds quicker than the F12 Berlinetta. By comparison, McLaren recently confirmed that its P1 will reach 60 mph in 2.8 seconds, pass 186 mph in 16.5 seconds and reach a governed top speed of 217 mph.

Helping motivate the LaFerrari is a hybrid drivetrain pairing a 6.3-liter V-12 with Ferrari’s F1-inspired HY-KERS hybrid setup. Two electric motors are featured, one mounted to the gearbox and sending drive to the rear wheels and the other used to take some of the load off the engine by powering auxiliary devices. Peak output of the system is 950 horsepower and torque somewhere above 660 pound-feet.

Ferrari has already shown us the LaFerrari but testing taking place at the Nürburgring as well as locations in Italy and the Middle East confirms that the car’s development is far from complete. No doubt Ferrari will be under pressure to meet its performance claims, and perhaps the automaker is also keen to beat the insane 6:57 production car Nürburgring lap record set by the 918 Spyder. It should come as little surprise that McLaren has also been furiously testing its P1 at the ‘Ring following the announcement of Porsche’s record.

This is one battle that will certainly be entertaining to watch.