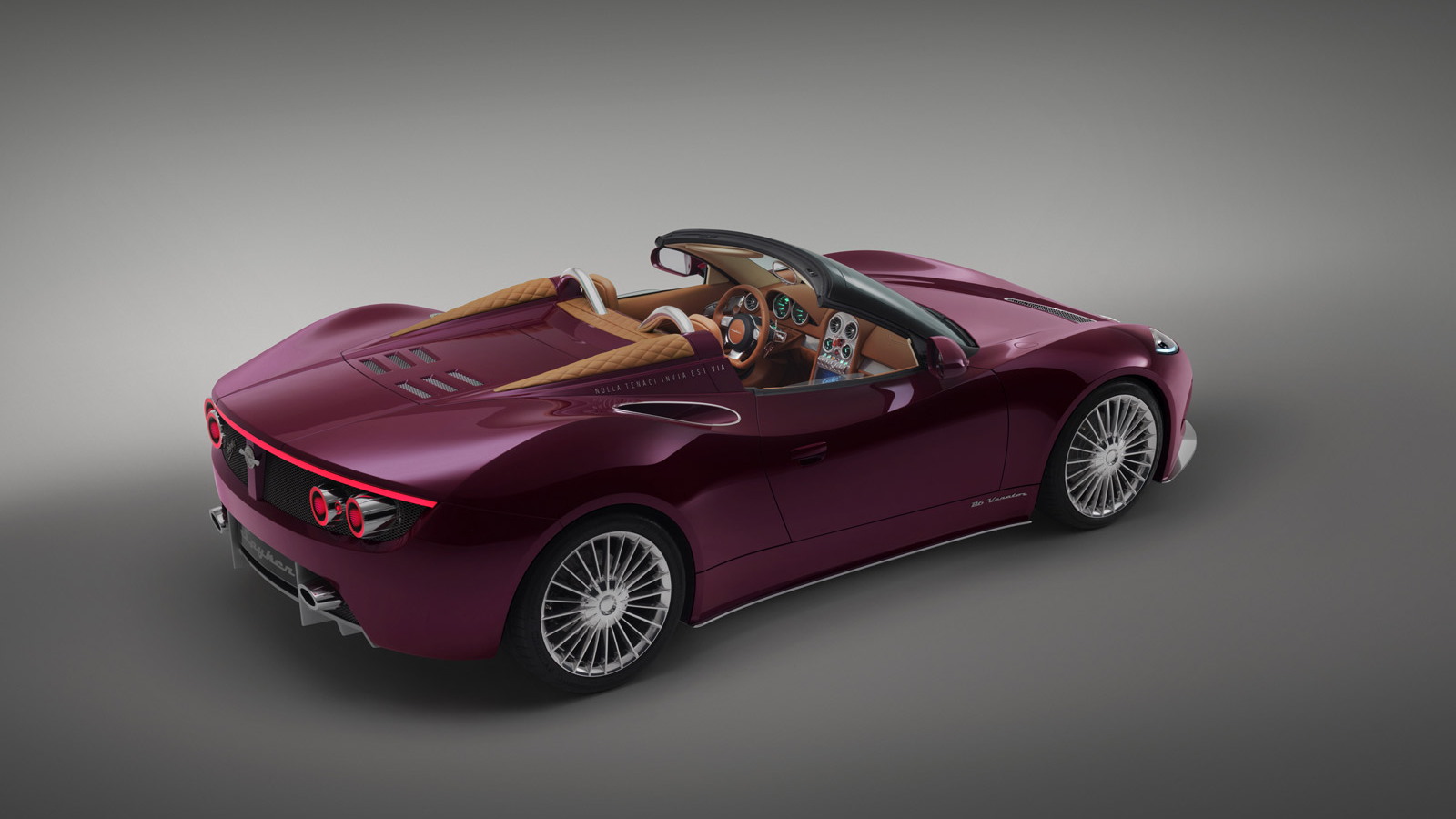 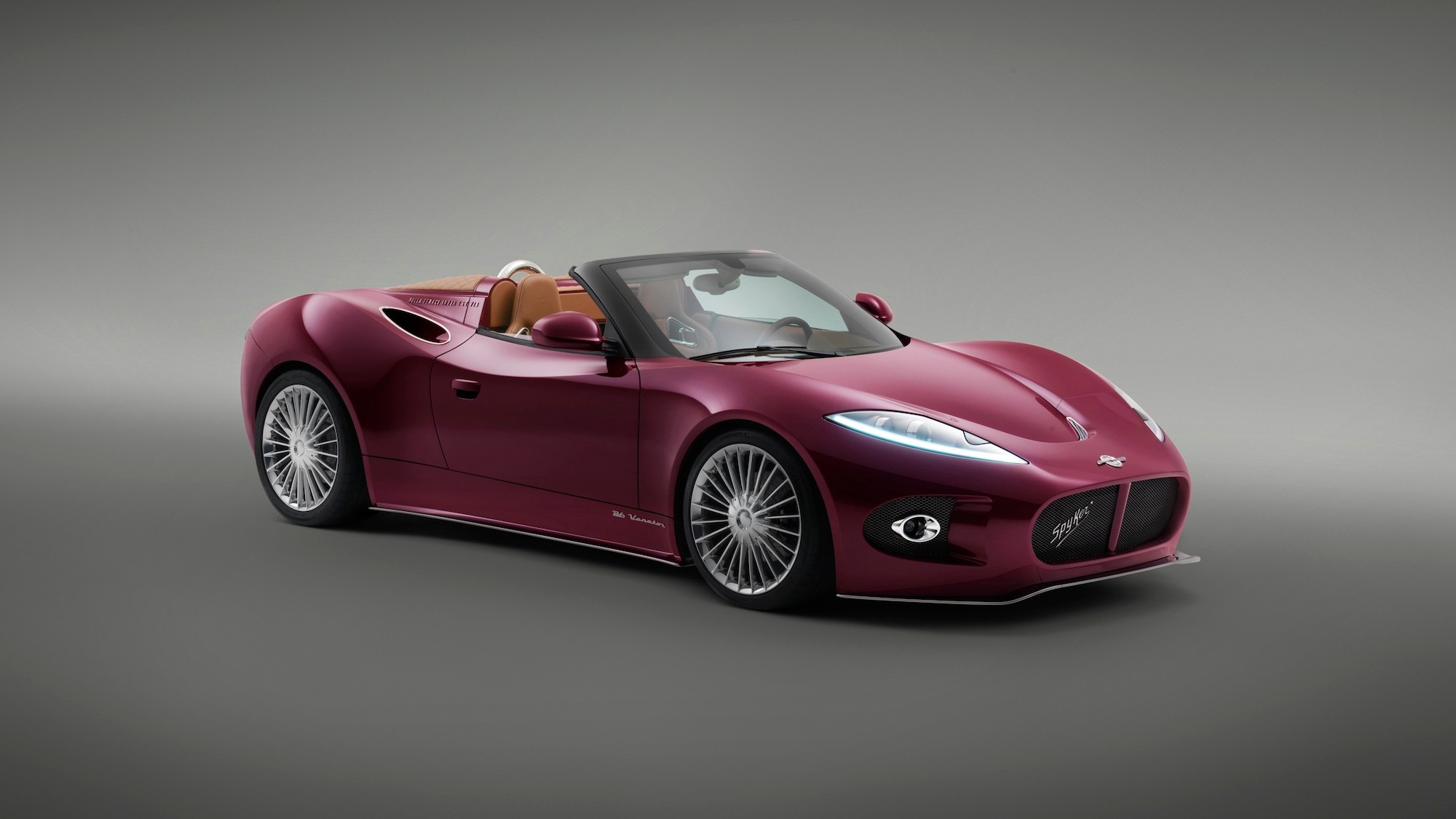 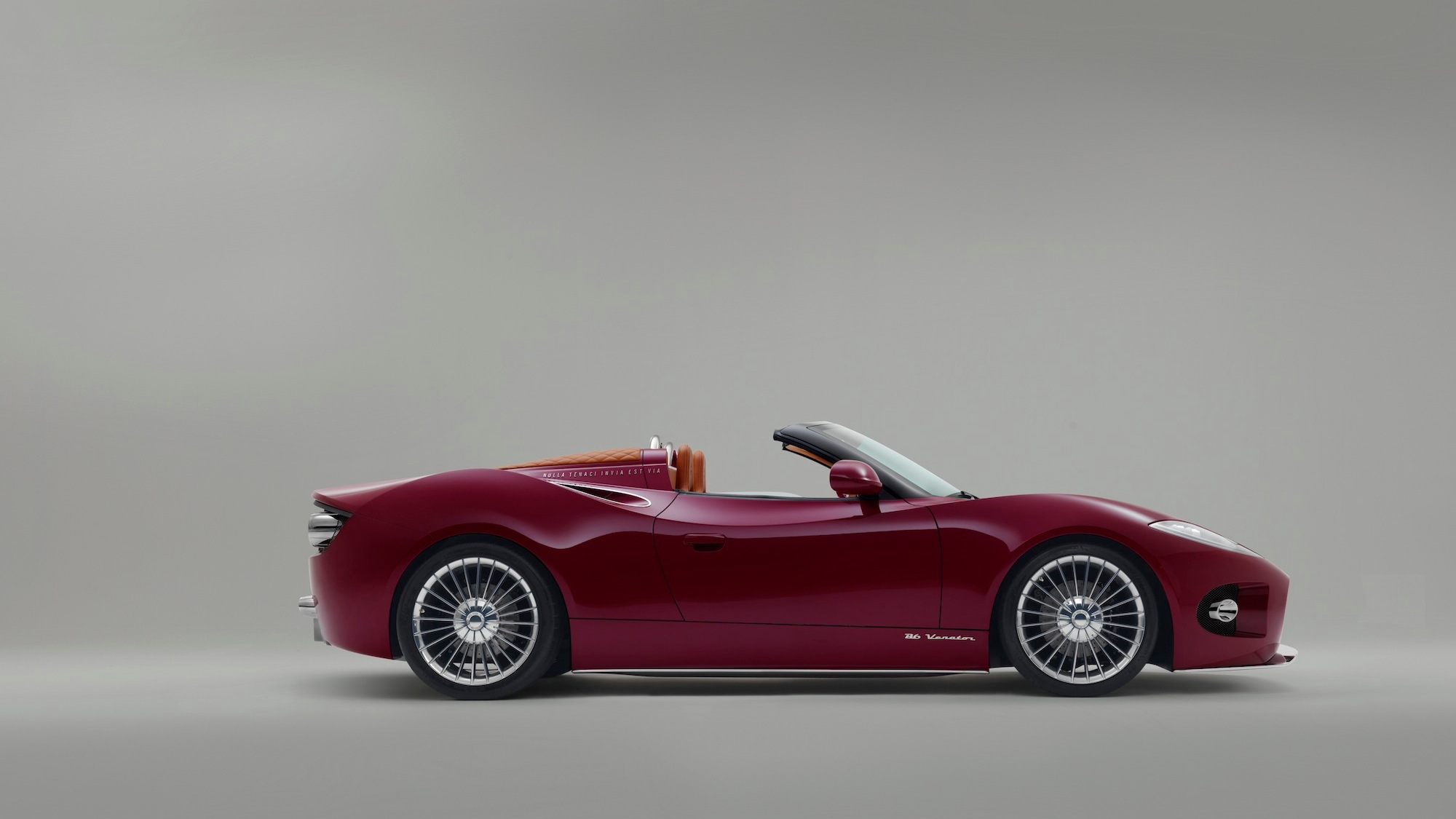 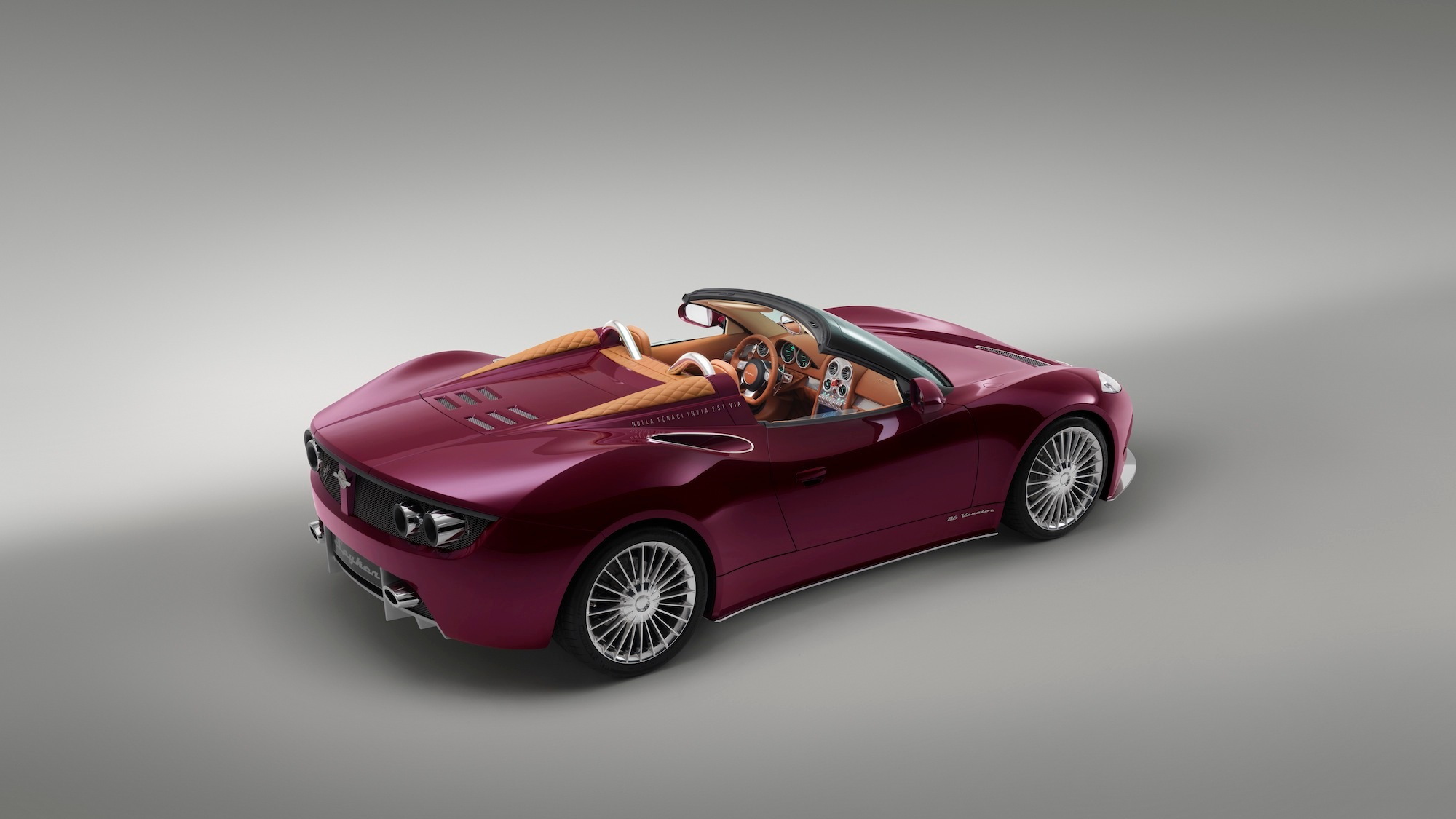 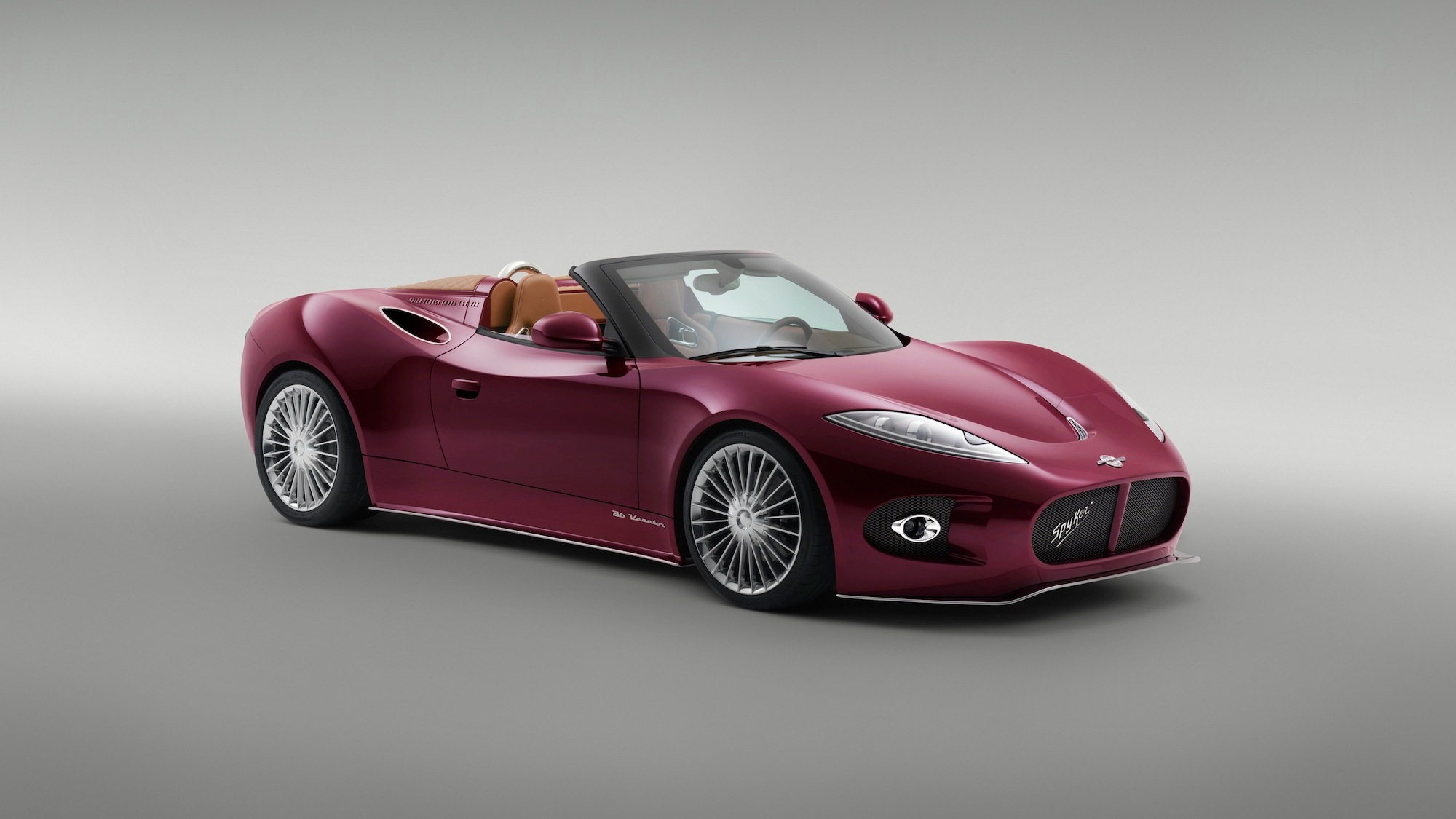 19
photos
Dutch sports car manufacturer Spyker has lifted the veil off a new convertible version of the stunning B6 Venator concept car that we first saw at the Geneva Motor Show in March. The convertible, aptly named the Spyker B6 Venator Spyder, made its debut today at the Pebble Beach Concours d’Elegance, where Spyker CEO Victor Muller was on hand to present his new baby.

Muller is not only the CEO of Spyker but also its chief designer. For the latest B6 Venator, he’s attempted to incorporate vintage cues of Spyker’s aviation past together with highly detailed design and bespoke materials. Key elements include V-pattern mesh in the front grille, which references Spyker models of the past century, a jet fighter-style cockpit, and LED rings for the tail-lights that mimic the afterburners of a modern jet fighter.

The company’s Latin axiom, Nulla tenaci invia est via, which translates to “For the tenacious no road is impassable,” is featured on the exterior. The name Venator is also Latin and means “Hunter.” The name was originally used on one of Spyker’s fighter planes from the early 20th century.

Stepping inside, it feels like you’re hopping into the cockpit of a vintage aircraft. Premium leather and turned aluminum can be found on most surfaces, and the use of plastic has been reduced to almost zero. More aircraft-themed items include a red cover on the ignition switch and a dashboard that lights up as part of a ‘pre-flight check’ whenever you hit the starter.

But the B6 Venator Spyder, as well as its coupe sibling, are not simply styling exercises; Spyker plans to put both cars into production starting next year. They will complement the company’s current C8 Aileron and offer fans of the brand a more accessible price point. Pricing for the B6 Venator will start at approximately $150,000.

Underpinning the car is a lightweight aluminum structure while the body is all carbon fiber. The power source is a 3.5-liter V-6, tuned to deliver at a minimum 375 horsepower and mounted in a mid-engine position. In concept form, the B6 Venator comes with a six-speed automatic and powers the rear wheels. Spyker says the car has a curb weight of approximately 3,090 pounds.

Production of both the B6 Venator and this convertible version is slated to begin late next year. Deliveries should also commence next year for most markets, though the first examples aren’t expected to arrive in the U.S. until early 2015.