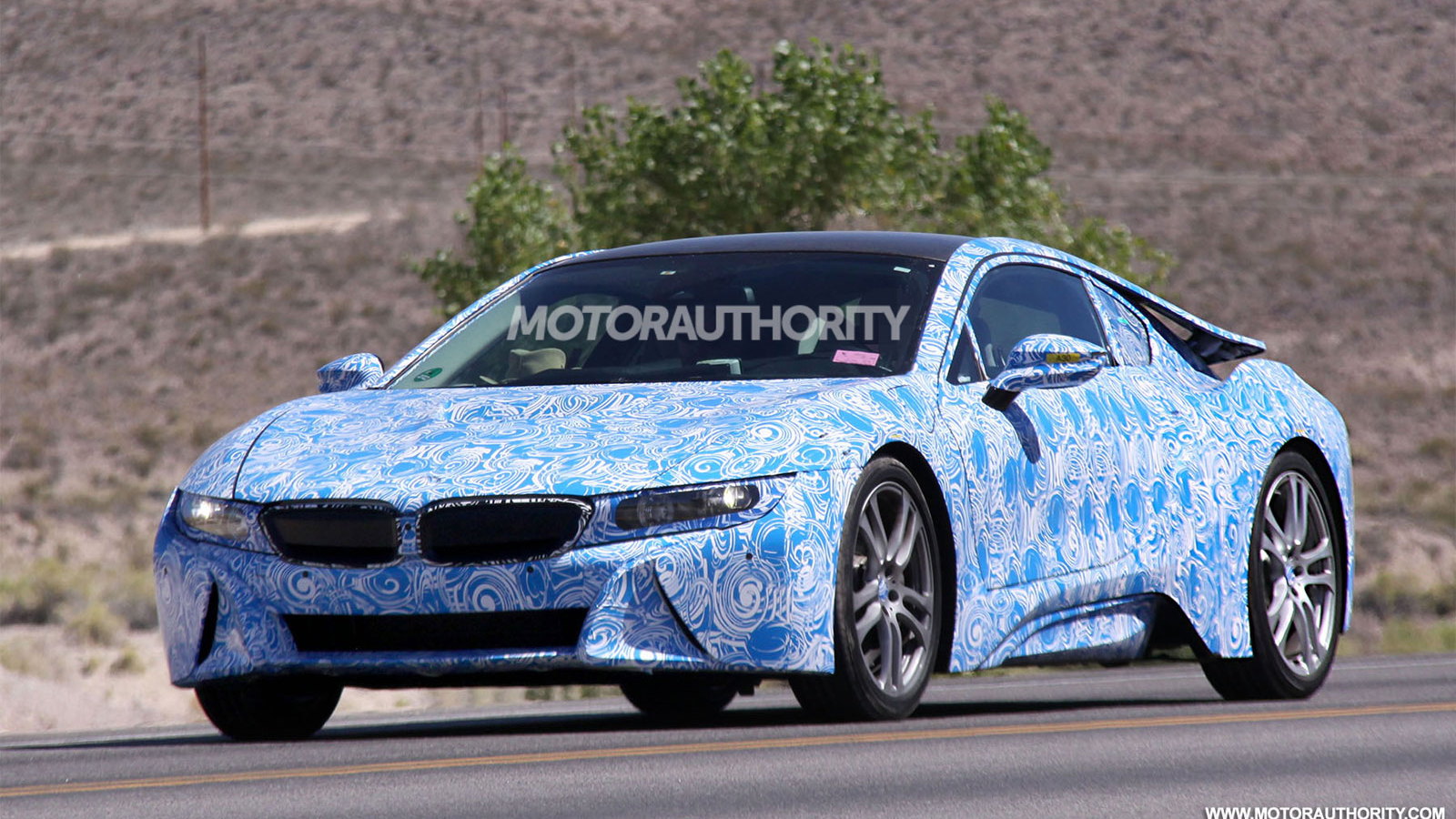 12
photos
The new i3 electric hatch isn’t the only i-badged BMW we’ll be seeing this year; another is a new i8 plug-in hybrid sports car that will not only top the i range of cars but also serve as BMW’s flagship. We were given our first taste of the i8 four years ago, when BMW rolled out its Vision EfficientDynamics concept at the 2009 Frankfurt Auto Show.

Since then we’ve seen the concept’s design revised, a convertible Spyder unveiled, and numerous prototype versions testing around the globe. Soon, we’ll see the production i8 revealed, as BMW has confirmed the car’s appearance at the 2013 Frankfurt Auto Show in just over a month.

In a lead up to its debut, BMW has provided details on the car’s technology and specifications.

As we already know, the i8 features a sophisticated drivetrain that pairs a turbocharged and direct-injected 1.5-liter three-cylinder engine with an electric motor. The engine is used to drive the rear wheels via a six-speed automatic transmission while the electric motor powers the front pair via an integrated two-stage auto ‘box. However, both power sources can work together to form a through-the-road all-wheel-drive setup.

The engine develops a peak 231 horsepower while the electric motor rates in at 96 kilowatts (131 horsepower). Maximum system output is 362 horsepower and 420 pound-feet of torque, which is said to be enough for 0-60 mph acceleration in under 4.5 seconds. Like most BMWs, top speed of the i8 will be governed to 155 mph.

On electric power alone, top speed is limited to 75 mph and BMW predicts a driving range of 22 miles. On a mix of electric-only and hybrid modes, BMW says i8 owners can expect a fuel economy of up to 95 mpg for the European combined cycle.

Running down the center of the floor is an "energy tunnel" that houses a lithium-ion battery. It has a liquid cooling system and can be recharged at home using an ordinary power socket. In the U.S., a full recharge takes approximately 3.5 hours from a conventional 120-volt, 12-amp household socket. Importantly, charging can also be done on the run using regenerative forces.

The i8's sophisticated drivetrain is housed in what BMW calls the “Drive” module, a lightweight aluminum structure that also houses the electronic control units, suspension components, and structural and crash protection components. The suspension consists of a double-track control arm front axle and a five-link rear axle, all made of aluminum. Electromechanical power steering and electronically operated dampers are also fitted. The wheels are forged aluminum and measure in at 20 inches across.

By attaching all of these technical components to the Drive module, the i8 benefits from a very low center of gravity (the lowest of any BMW) and a perfect 50:50 weight distribution.

Mounted on top is the “Life” module, which is essentially the passenger cell. This section is comprised primarily of carbon fiber-reinforced plastic in order to keep strength and rigidity high but weight low. The savings from this design offset the additional weight of the electric motor and battery, giving the i8 a curb weight of less than 3,285 pounds. If it had stuck with conventional steel, BMW says the i8 would weigh around 50 percent more.

Other innovations for the i8 include the use of chemically-hardened glass similar to Gorilla Glass used for smartphones. Some of the glass on the i8 is just 0.7 of a millimeter thick, yet it still provides the sound-deadening one would expect in a luxury car.

For the driver, selection of power sources is done intelligently via computer control. BMW’s typical linear acceleration is said to be maintained even at higher speeds since the interplay between the two power sources absorbs any power flow interruptions when shifting gears.

Using the gear selector, the driver can either select position D for full automatic mode or can switch to SPORT mode. SPORT mode offers manual gear selection and at the same time switches to very sporty drive and suspension settings. Power is also split between the front and rear axles to aid handling. On entering a corner, for example, the power split is biased towards the rear wheels to improve turning precision.

The Driving Experience Control switch on the center console offers a choice of two settings: COMFORT and ECO PRO. On starting, COMFORT mode is activated, which offers a balance between sporty performance and fuel efficiency. ECO PRO minimizes power loss through items like the air conditioner and maximizes regenerative forces. The driving range in the COMFORT setting is around 310 miles but hitting ECO PRO can boost this by around 20 percent.

That's all BMW is telling us for now, but we should have the full details soon. Following its debut at the 2013 Frankfurt Auto Show early next month, the i8 will hit European showrooms later in the year and should be on sale in the U.S. next spring.