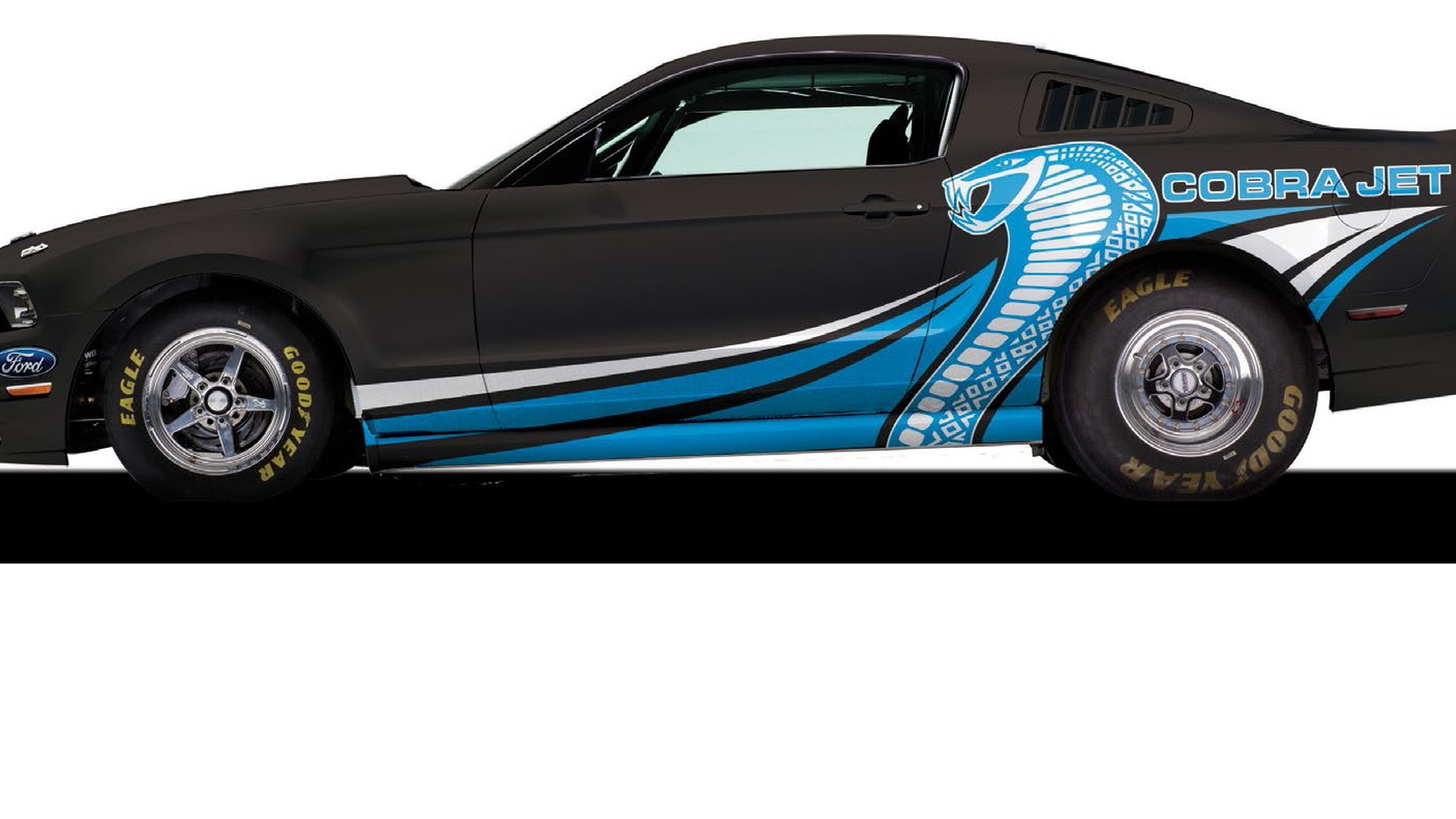 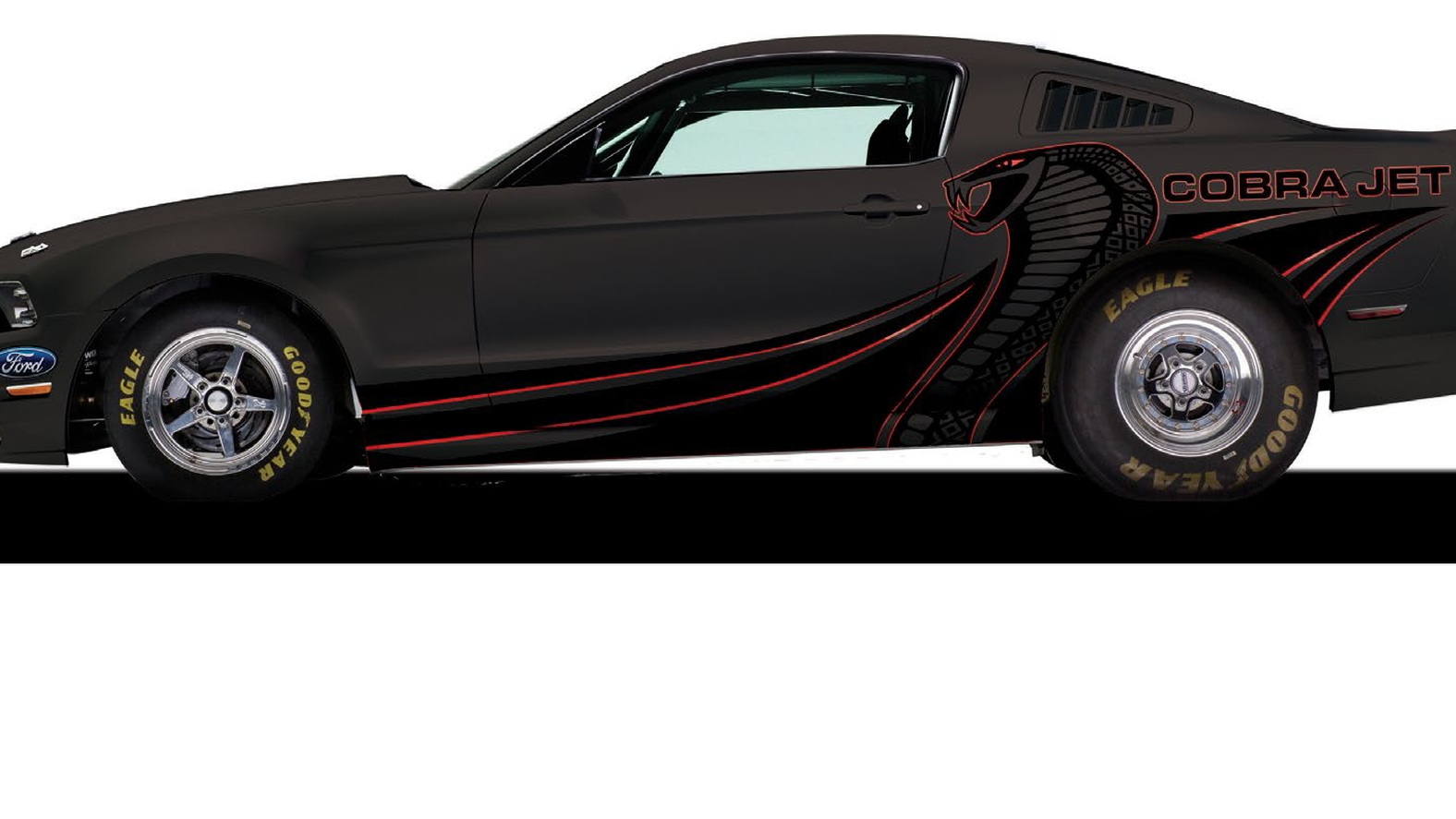 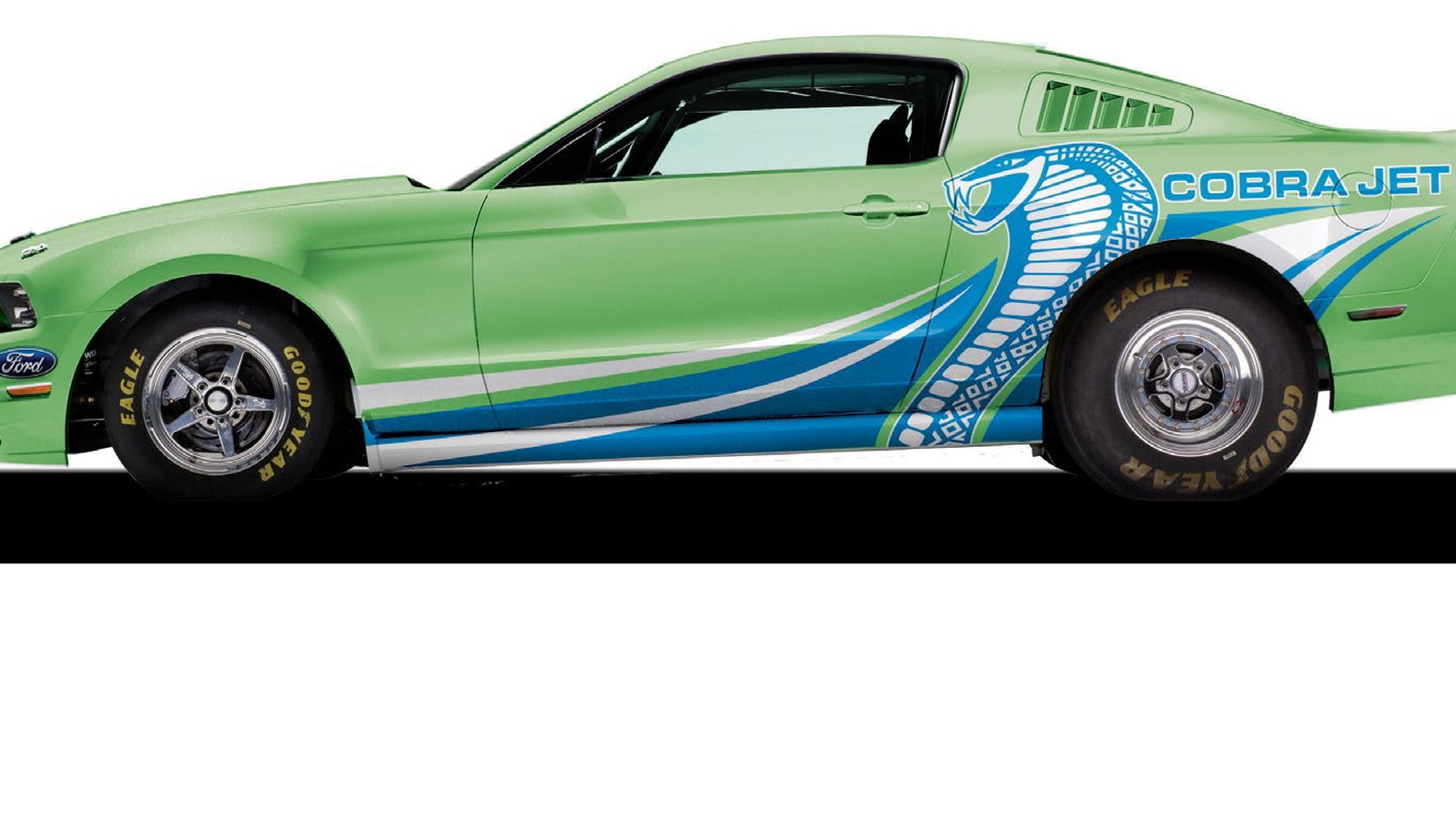 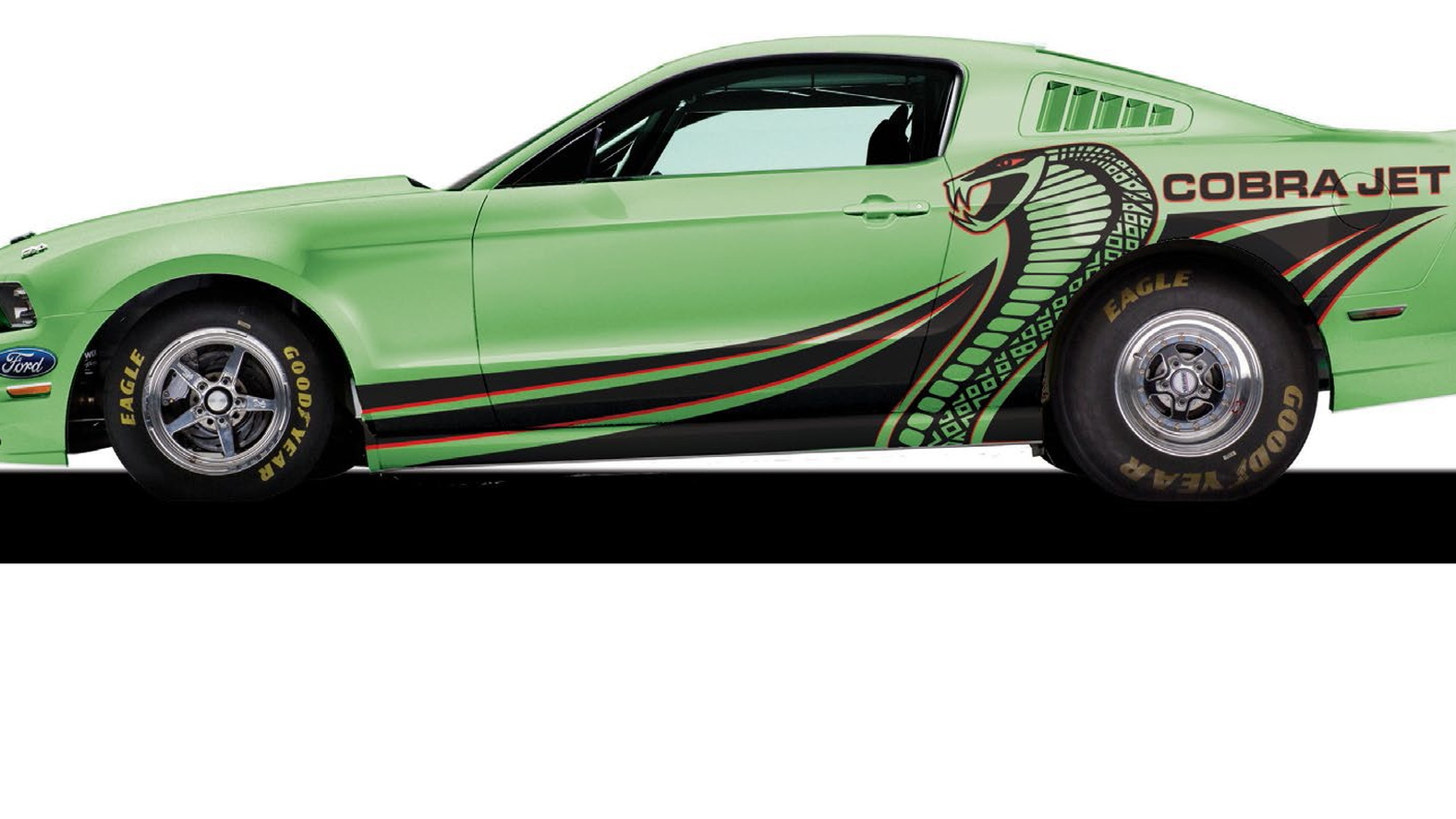 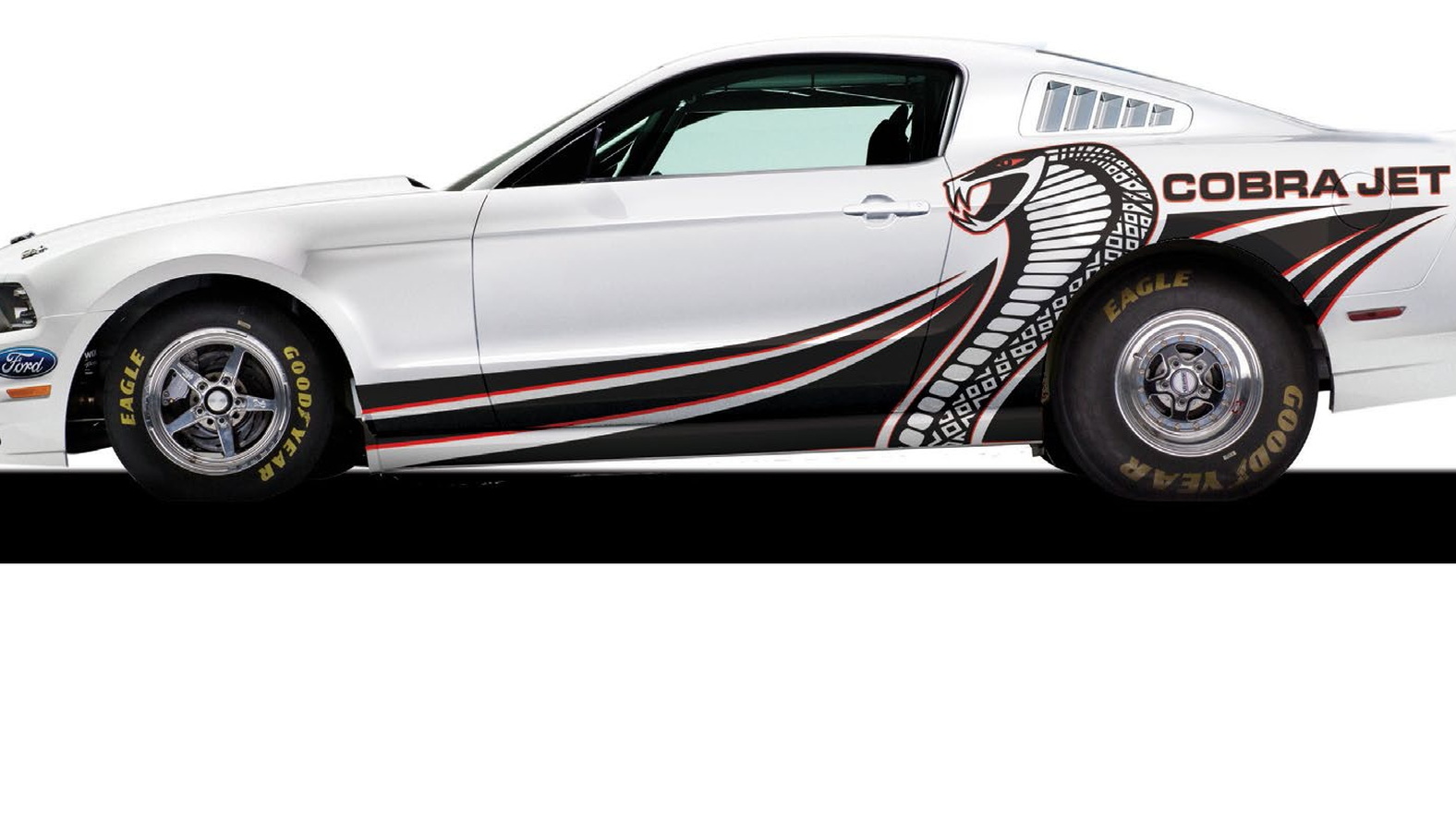 5
photos
Last October, Ford showed a new twin-turbo version of its drag-strip-only Mustang Cobra Jet at SEMA, and spent a fair amount of time talking up the advantages of multiple turbos versus a single 2.9-liter supercharger.

To start with, turbochargers don’t scavenge power off the engine, since their turbines are spun by escaping exhaust gasses. Superchargers, on the other hand, are belt-driven from the engine, requiring significant horsepower to operate. In the case of the 2013 Mustang Cobra Jet, its 2.9-liter blower can take up to 100 horsepower to spin.

That seemed like a pretty clear indication that Ford was going the twin-turbo route for its next Mustang Cobra Jet. Imagine our surprise, then, when Ford handed us the details on its 2014 Mustang Cobra Jet, powered by the same 2.9-liter supercharger-equipped 5.0-liter V-8 as in 2013.

In fact, the primary differences between the years are new colors (including Gotta Have-It Green and flat black, a non-factory color), a new three-speed transmission with an SFI-approved housing and parachute mounts for cars built to exceed 150 mph.

As before, the 2014 Mustang Cobra Jet will be for off-road (and on-track) use only, and it will be built in a quantity of just 50 units (making it even rarer than the 69-unit COPO Camaro). Its lightened body structure is designed for optimum weight distribution, and it sports Recaro race seats and a rollcage designed using finite element analysis.

Even the Ford Racing suspension is designed to deliver the best 60-foot times, via computer modeling and analysis of hundreds of quarter-mile runs. In fact, for $97,990 (plus paint and graphics), you get a turn-key, collectable race car that’s eligible for NHRA Stock or Super Stock classes.

It’s even got its own racing series (the Cobra Jet Showdown) and driving school (the Roy Hill Cobra Jet Experience), and Ford says the Mustang Cobra Jet is a record holder in more Stock and Super Stock classes through last season than any other model.

If you want one, now is the time to place an order (for part number M-FR500-CJ) at your local Ford dealer. Orders are filled on a first come, first served basis, and interested buyers who miss this production run will be added to a list for the next model. Production will start in July, with deliveries in time for the 2014 racing season.