On Tuesday, we brought you the story of The New York Times, represented by writer John M. Broder, versus electric car maker Tesla. While the entire incident has been documented and replayed across multiple media sites, we can summarize it by saying that the two sides are at odds on the Tesla Model S’ winter driving range.

In a piece written for The New York Times that was supposed to highlight the advantages of Tesla’s Supercharger technology, Broder was to drive a Tesla Model S sedan from Washington, D.C. to Boston, Massachusetts. Along the way, however, the article turned into a criticism of the electric car’s unpredictable range in cold weather.

As Broder relates the story, he barely had enough battery charge to reach Milford, Connecticut after using a Supercharger station in Newark, Delaware. To preserve declining battery power, Broder says he was forced to turn off the heat and set the cruise control to a snail-like 54 miles per hour.

Eventually, the predictable happened: on day two, Broder alleges he ran out of power while seeking a charging station, and his Model S shut down on a highway off-ramp in Branford, Connecticut.

Tesla’s CEO, Elon Musk, was quick to label the story a fake, and promised that the vehicle’s data logs would paint an entirely different picture. On Tuesday afternoon, Broder even published a second story on The New York Times' blog, responding to Musk’s allegations.

On Wednesday, Musk published his long-awaited blog post, complete with data logs from the car used by Broder on his test-drive. To call the data damning to Broder’s claims is a bit of an understatement, and (if accurate) it brings into question the real intent of the original piece. For example:

In defense of Broder, the Model S reportedly lacked the charge to release the parking brake when put on the flatbed at the Connecticut off-ramp, and we’re not sure how you’d fake this. While the evidence from Tesla appears to be solid, sometimes things are more gray than back or white. 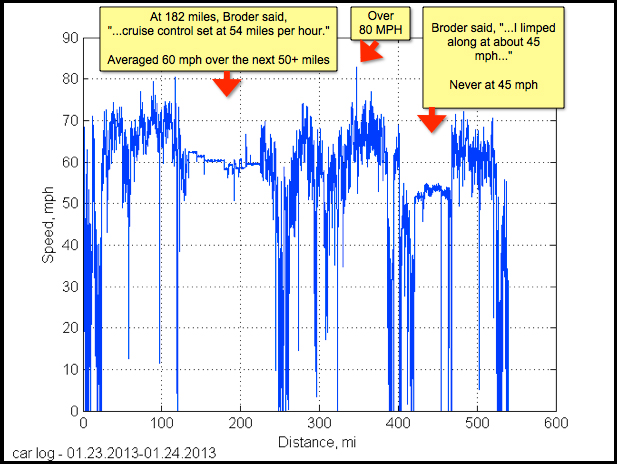 We’re fairly certain that The New York Times will publish its own take on Musk’s data, but we’re less certain the paper will conduct any kind of investigation into Broder’s story. As for Tesla, Green Car Reports says it’s closed the books on the incident, and no further statements will be issued.

Was Broder’s piece a deliberate hatchet-job on the Tesla Model S sedan, or did the Model S sedan really exhibit unexpected (and potentially troubling) range discrepancies in cold weather? The ultimate truth, we suspect, lies between these two extremes.