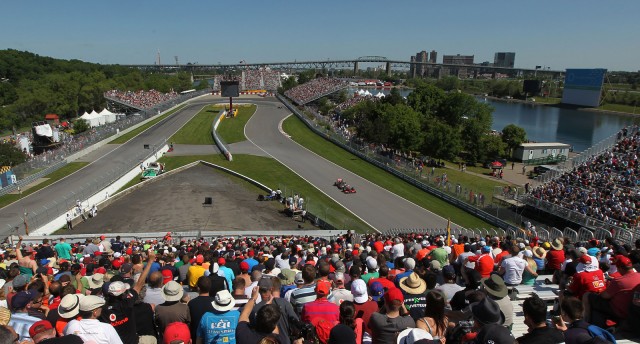 Though we saw some light rain during practice, weather conditions for the 2012 Formula 1 Canadian Grand Prix appear to be fine and sunny.

The current temperature at the Circuit Gilles Villeneuve in Montreal is 59 degrees F (15 degrees C) and there is barely any cloud scatter.

Temperature during the race later today should peak at 75 degrees F (24 degrees C), making for a great race both for teams and spectators.

Hopefully the rain we saw earlier this week won’t return. We’re sure it would have reminded drivers of last year’s heavy downpours, which ended up stopping the race for two hours.

Another factor reminding drivers of last year’s race would have been Sebastian Vettel’s repeated pole position at the event. Unlike last year, however, there will only be a single DRS zone in the race--located on the long straight before the Montreal track’s final chicane.

Joining Vettel at the front of the grid will be McLaren’s Lewis Hamilton, who we’re sure will be eager for his first win of the season. Behind them will be Ferrari’s Fernando Alonso and Vettel’s Red Bull Racing teammate Mark Webber.

Going into today’s race, Fernando Alonso sits at the top of the points ladder on 76 points, followed by Sebastian Vettel and Mark Webber tied on 73 points.

Lewis Hamilton has 63 points while Mercedes-AMG driver Nico Rosberg lies fifth with 59. Red Bull Racing continues to lead the Constructors' standings with 146 points, McLaren is second with 108 and Ferrari is tied with Lotus F1 Team at 86. Mercedes-AMG is fifth with 61 points.

With three world champions starting at first, second and third on the grid, the 2012 Formula 1 Canadian Grand Prix is shaping up to be a thriller. It will be particularly interesting if Lewis Hamilton manages to win his first race of the season, making the 2012 season have seven different winners in the seven races contested so far.