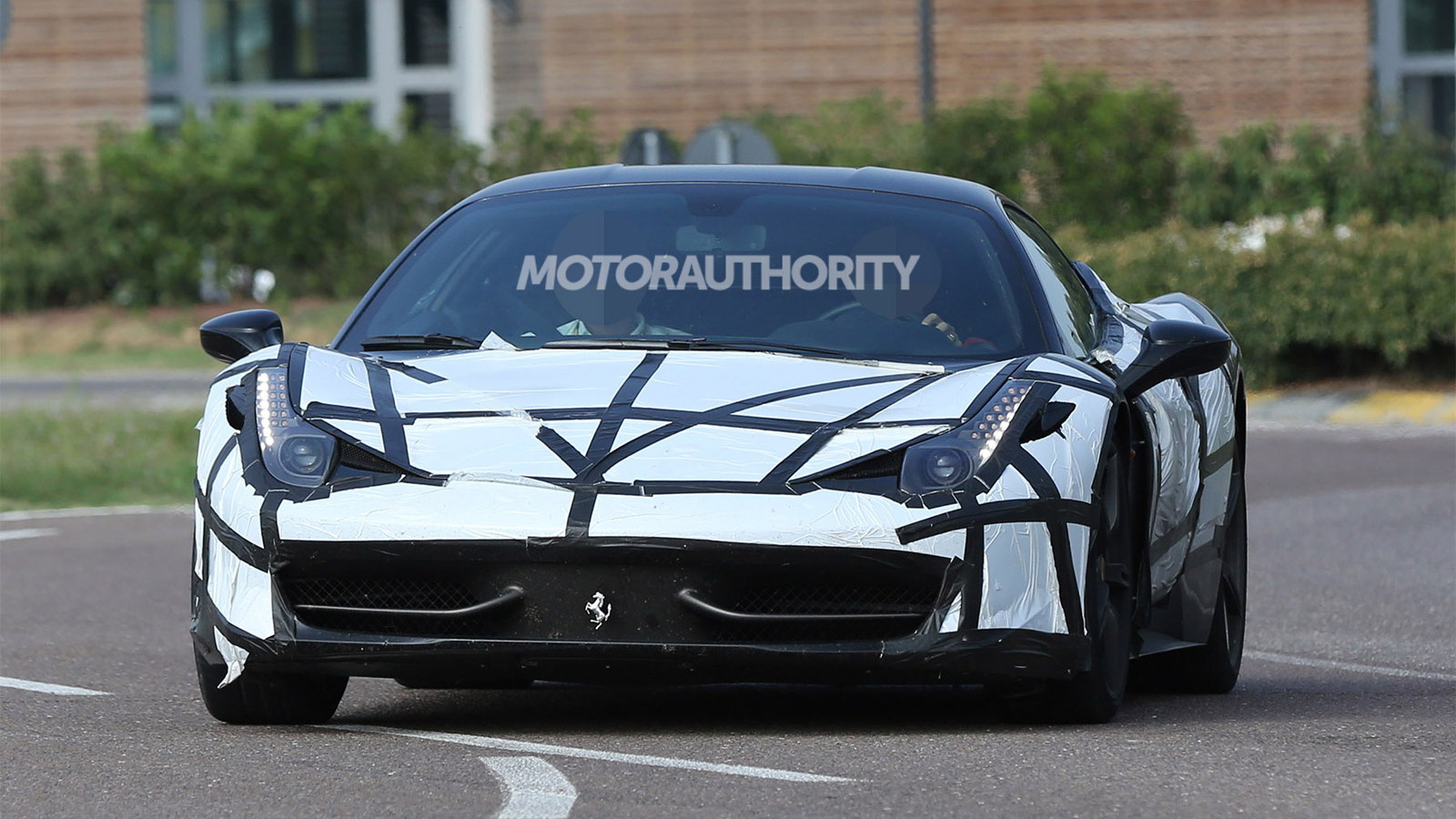 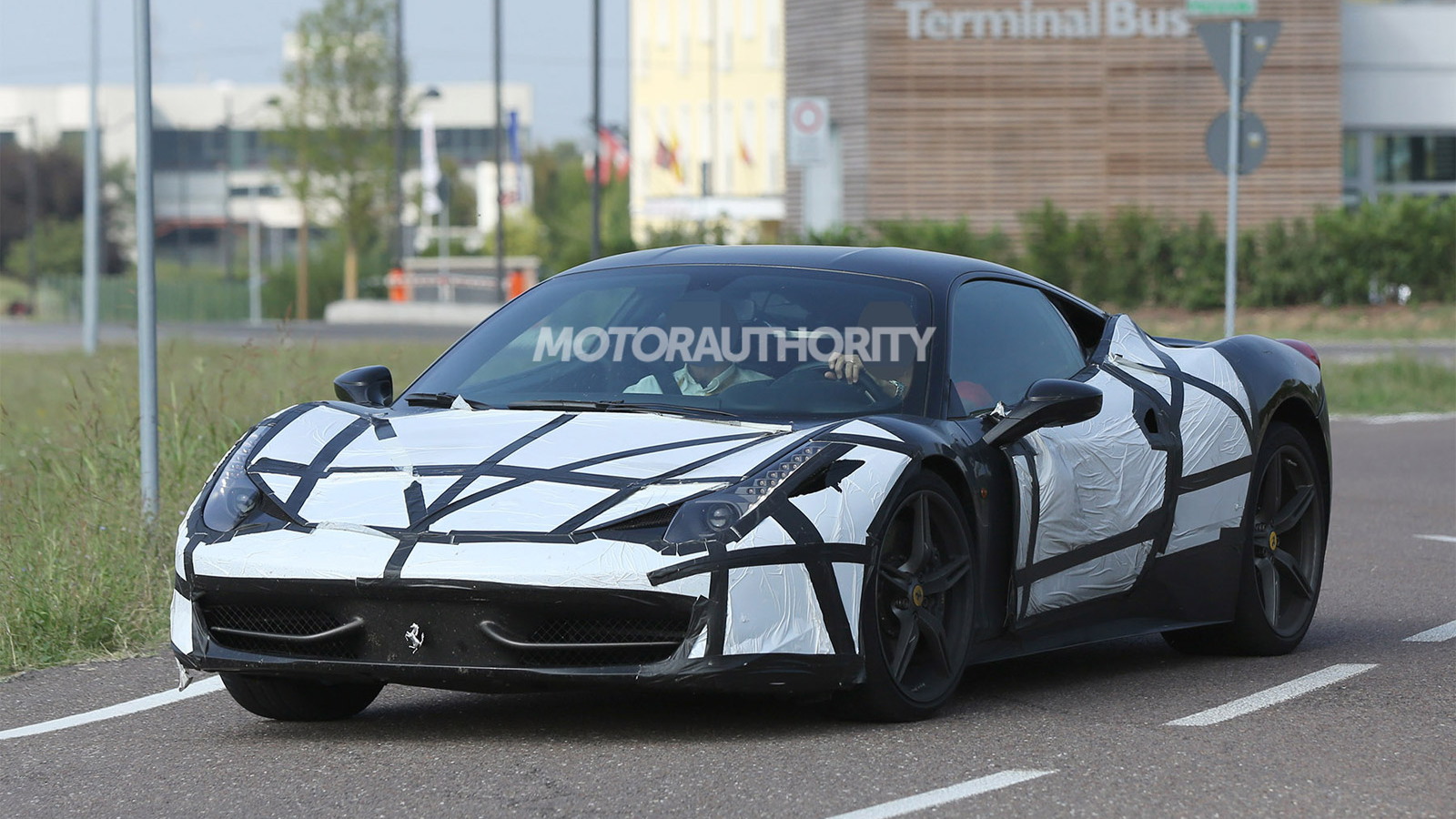 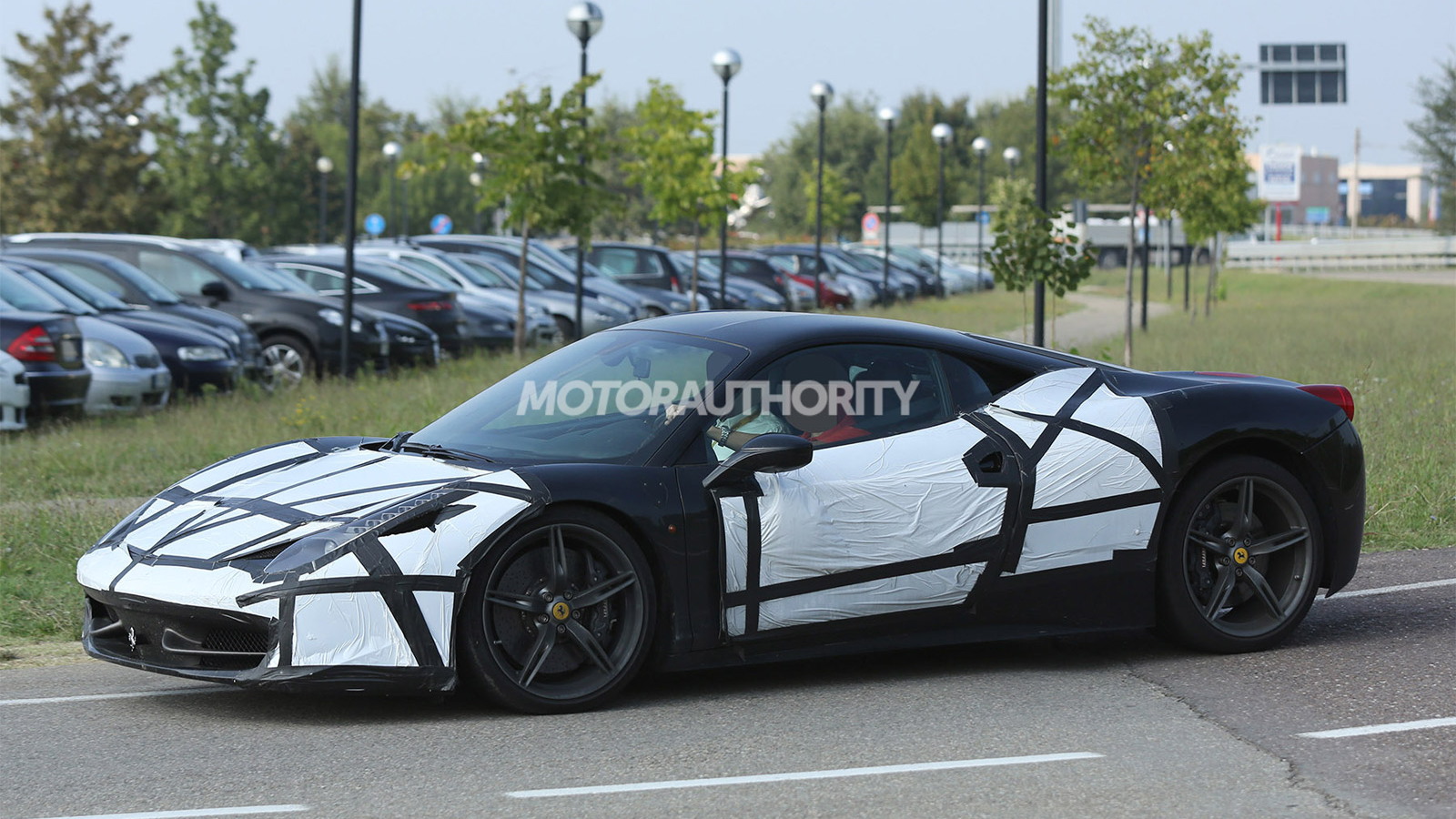 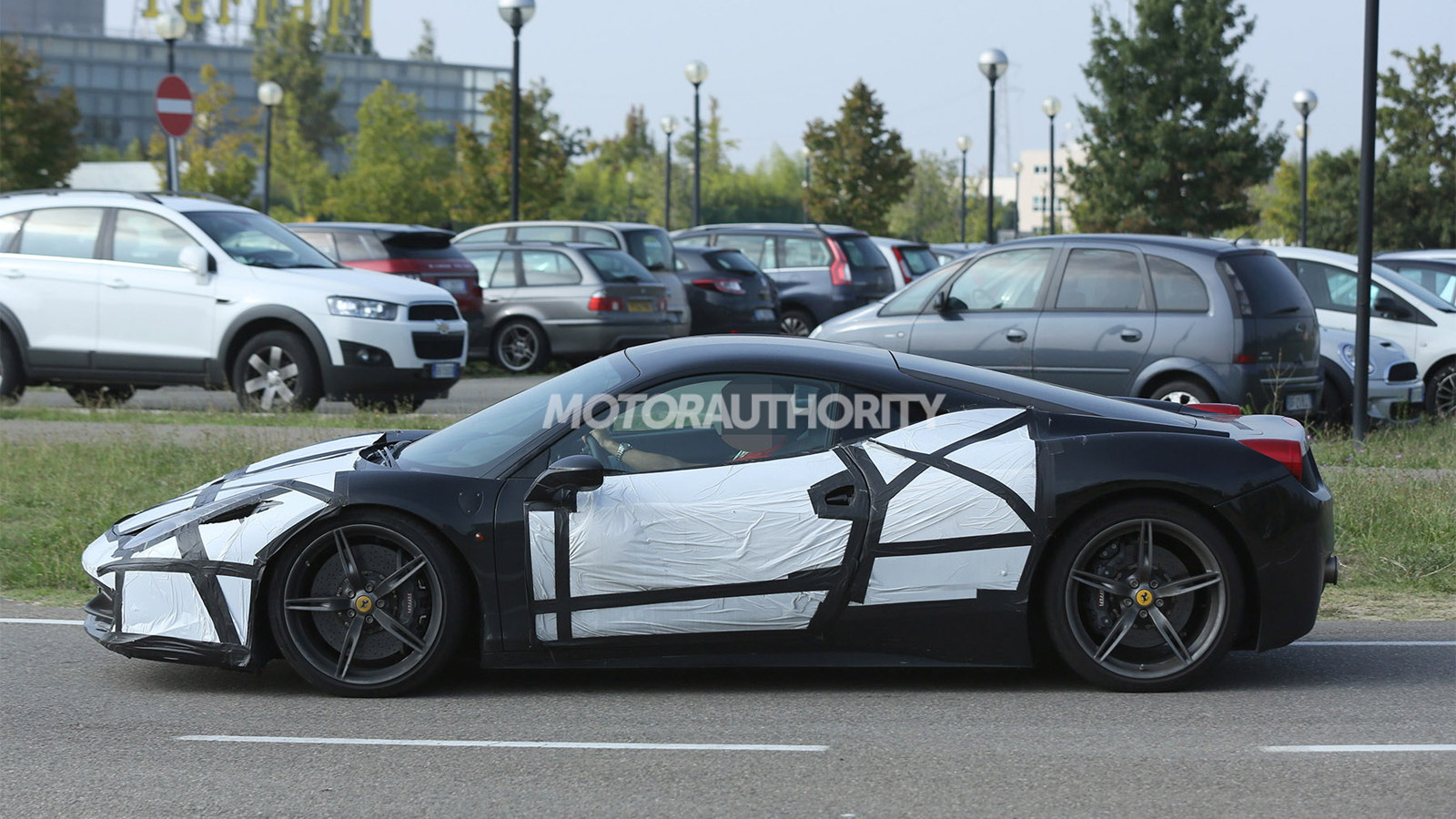 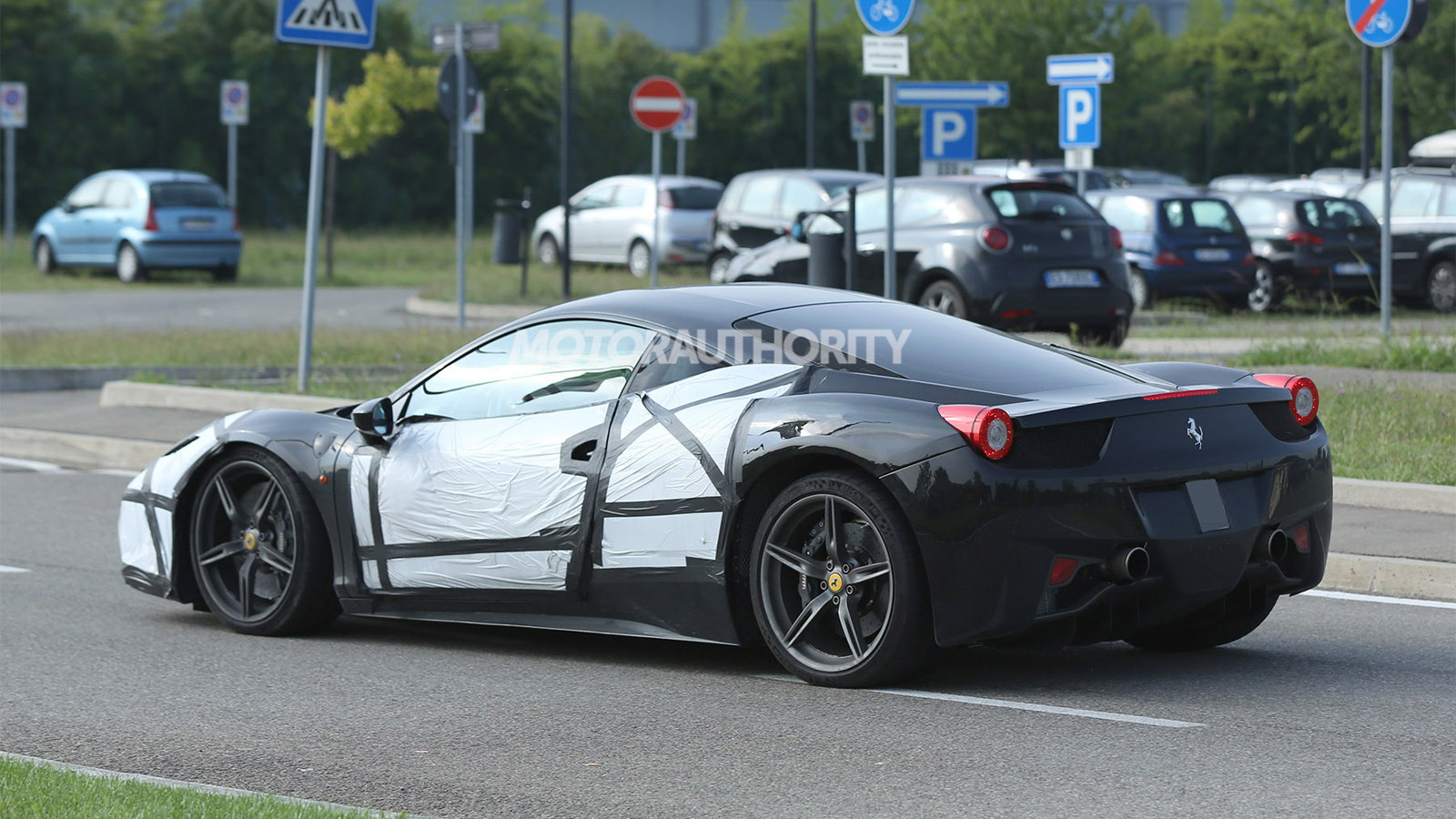 8
photos
Ferrari’s 458 Italia and its hardcore Speciale variant are shaping up to be the Prancing Horse’s last normally aspirated V-8 cars, as the 458 is about to undergo its mid-cycle update and we hear the new car will be powered by a turbocharged engine.

These are the first spy shots of a prototype for the updated 458, or “modificato” as they say in Italy—hence the working title of 458M. The 458M, which may ultimately use the M458-T title, is expected to debut at the 2015 Geneva Motor Show next March.

As the spy shots confirm, the changes to the exterior will be minimal. There will be tweaks to the front bumper, new molding of the flanks and a revised rear. Crucially, the trio of exhaust pipes on the 458 Italia will be replaced by twin pipes fitted higher up in the rear fascia of the 458M, similar to the design used for the 458 Speciale.

This prototype is for the coupe but an updated version of the 458 Spider is due around the same time. It will sport the same changes you see here. For the cabin of the 458M, look for the new Apple CarPlay system to be fitted along with a backup camera and the California T’s Harman-Kardon infotainment system.

The engine destined for the 458M is expected to be an uprated version of the California T’s twin-turbocharged 3.8-liter V-8. Peak output should lie close to 670 horsepower, enough to give the car the advantage over McLaren’s 641-horsepower 650S in the power stakes. Importantly, the 458M will be packing 100 horses more than the 458, which should ensure a significant leap in performance over what is already an excellent car.

To ensure the car sounds as ferocious as ever, Ferrari will maintain a flat-plane crank and tweak the exhaust and electronic engine management systems. And, in order to maximize performance of the car, lessons learned from developing the LaFerrari flagship are also being applied.

Ferrari has confirmed it will stick with V-8 and V-12 engines for the foreseeable future but will add turbochargers to its eight-cylinder mills in order to boost their performance while cutting CO2 emissions. We’ve already seen this with the California T, and now it’s the 458’s turn. The good news is that Ferrari’s V-12s will be staying normally aspirated for some time to come, although we’ll start seeing them being paired with hybrid systems.

Stay tuned for the reveal of the 458M next year. In the meantime, we can look forward to the reveal of a new 458 Speciale Spider at next month’s 2014 Paris Auto Show.