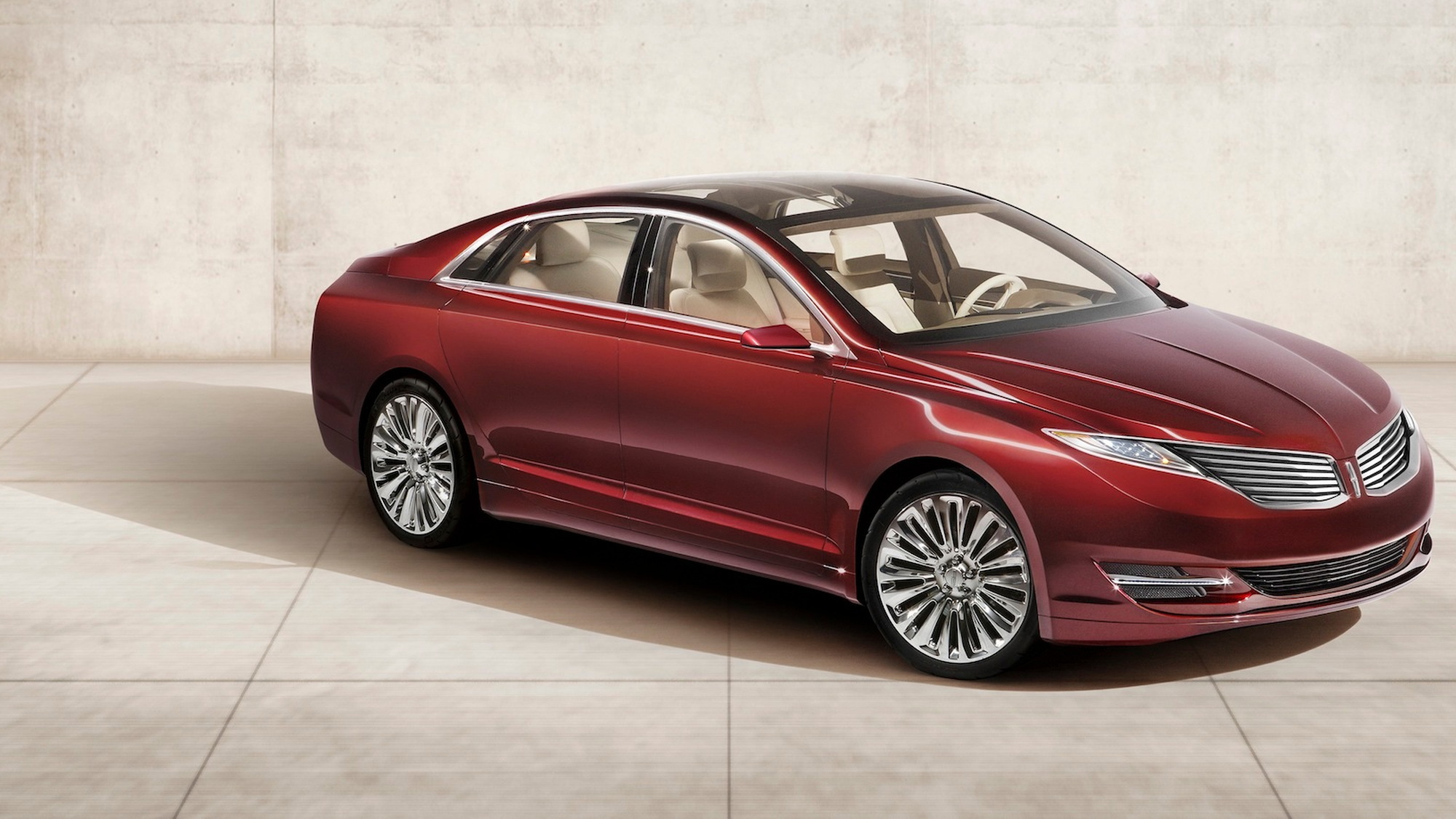 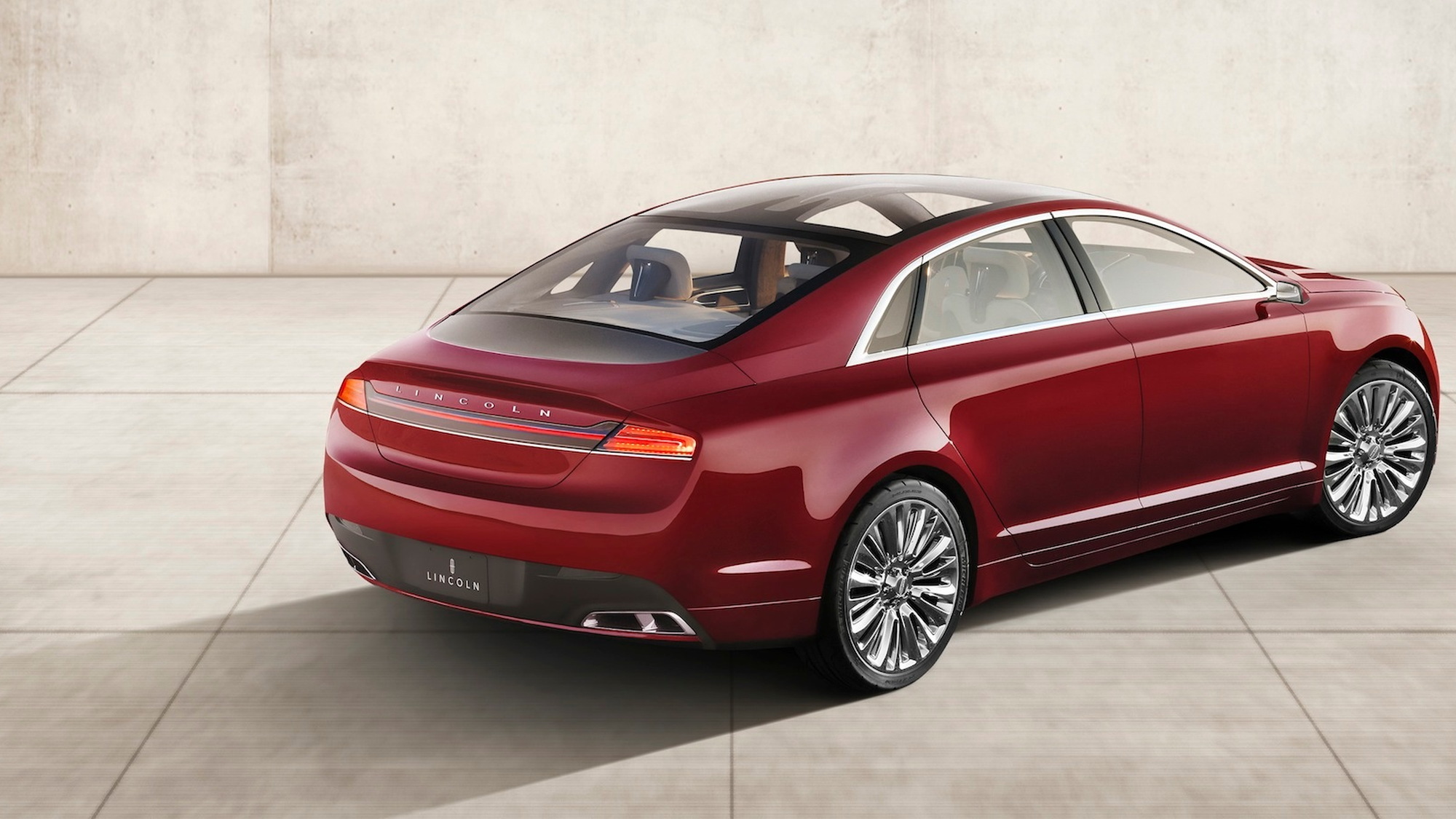 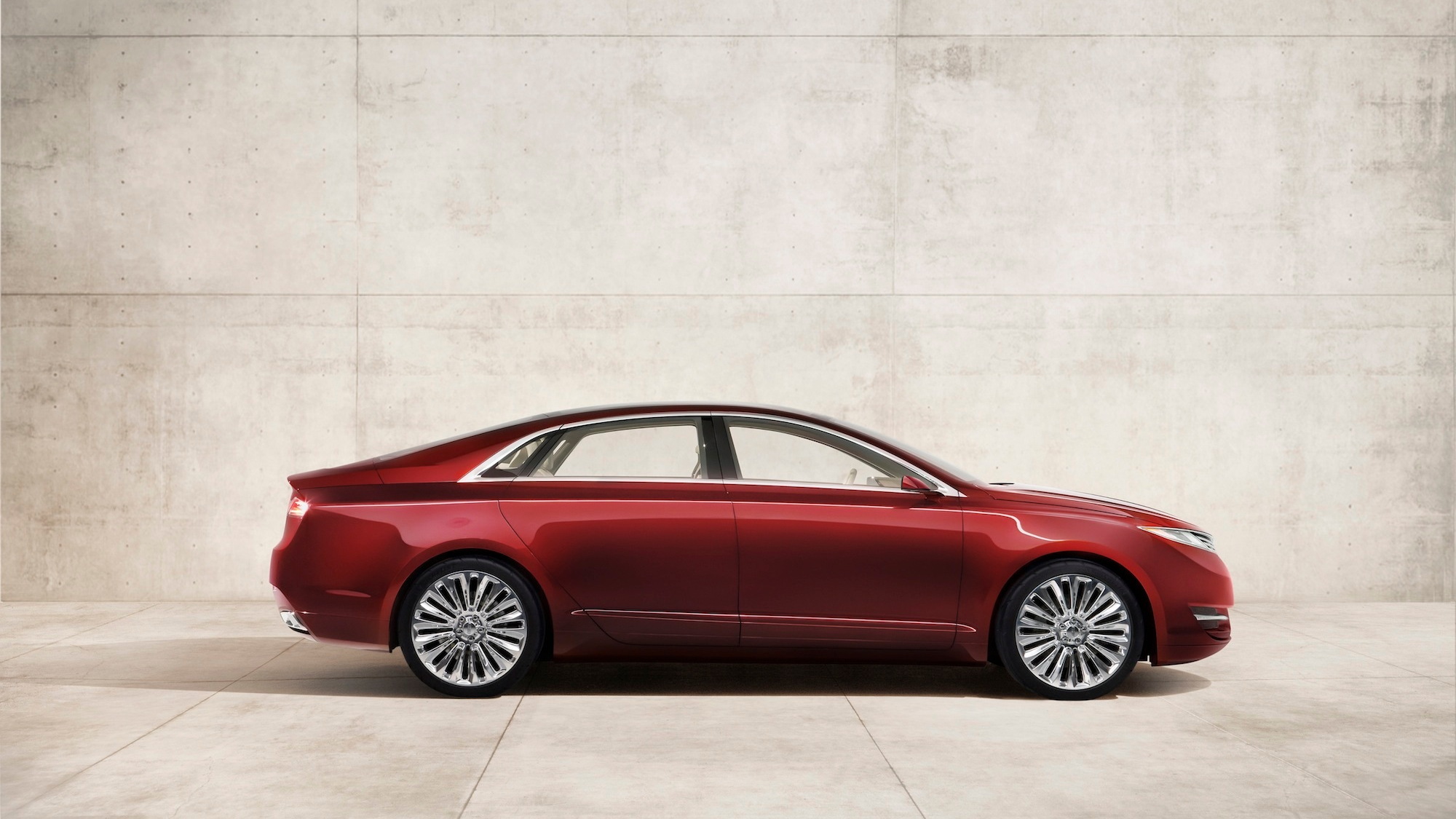 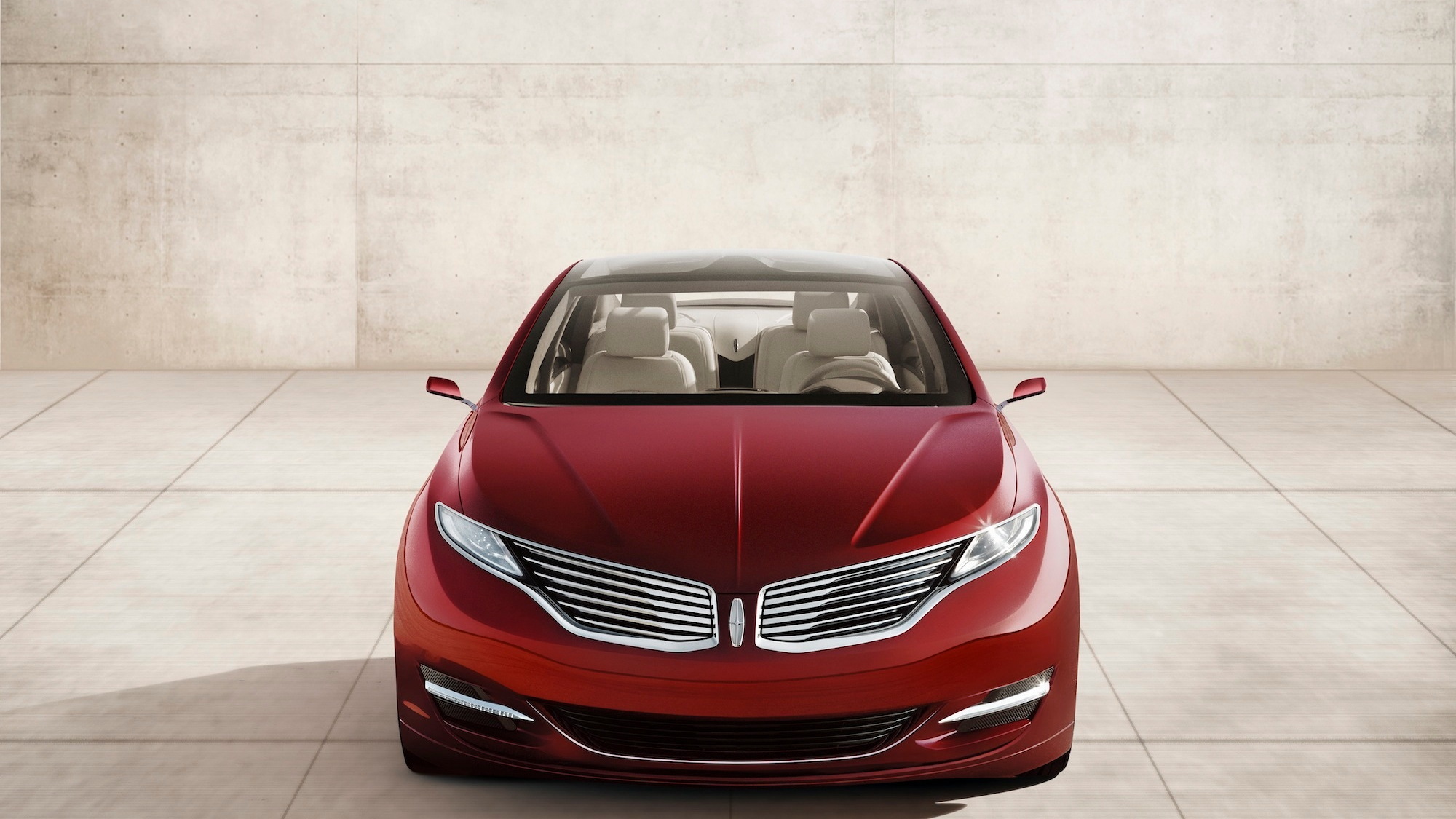 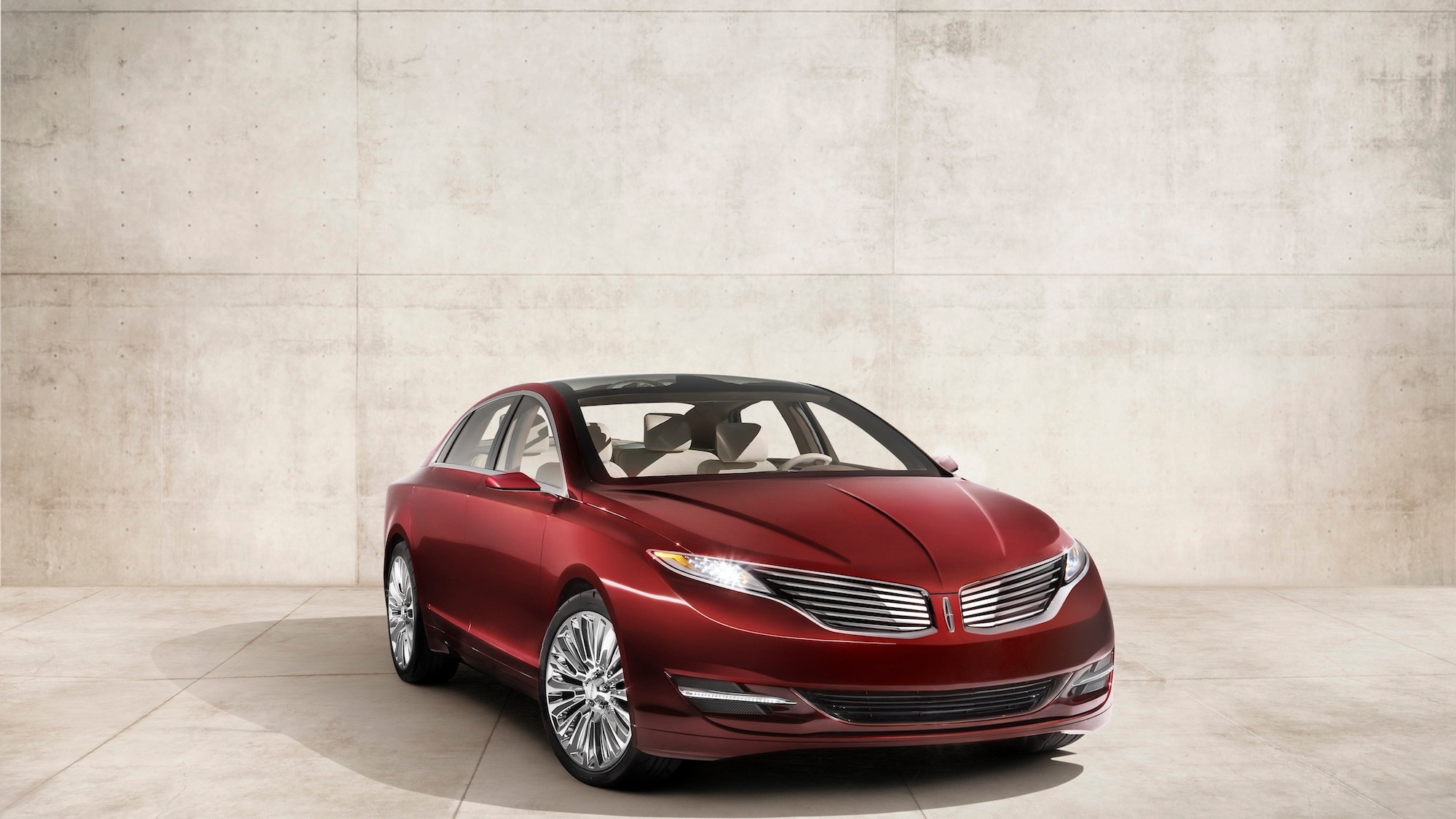 11
photos
Just a day after Cadillac took the wraps off the 2013 ATS luxury sedan, Lincoln is revealing a new sedan of its own, in concept form, with the new MKZ Concept.

Debuting alongside the all-new Ford Fusion, which will likely share its core with the future production MKZ, Lincoln nevertheless promises not just a warmed-over new sedan, but "a new brand."

Carrying that much weight is a huge task, particularly for the previously staid and somewhat underwhelming MKZ sedan, but Lincoln's Max Wolff thinks the MKZ Concept is up to the task. "Our movement as a brand is toward something we call elegant simplicity. It’s something warmer and more restrained, which is moving away from complex designs and traditional luxury," said Wolff in a release.

The MKZ Concept's cognac-colored exterior is intended to convey that sense of warmth, as is the interior's "responsibly harvested" poplar wood, aluminum, and leather interior. A pushbutton transmission, 10.1-inch TFT LCD driver display, and 8-inch LCD touchscreen in the center console highlight the high-tech aspects of the MKZ Concept. Lane Keeping System and MyLincoln Touch are also fitted. A panoramic glass roof opens the cabin to the sky.

The champagne-colored seats are perforated in a "champagne perforation pattern," intended to "conjure the image of champagne bubbles rising from the bottom of a glass."

No mention of engines is made with the MKZ Concept, as it's intended primarily as a design and technology showcase, but we expect Ford's selection of four-cylinder and V-6 engines, including EcoBoost models, to be on the table for the production MKZ when it arrives.

“With the Lincoln MKZ Concept, we are not introducing a new car. We are essentially introducing a new brand,” said Derrick Kuzak, Ford Motor Company group vice president for Global Product Development. “The MKZ Concept is the next step in the reinvention of Lincoln, something we’ve been quietly but aggressively pursuing.”

The MKZ Concept strongly hints at the production model arriving in dealerships later this year, as well as Lincoln’s design future.

“The MKZ Concept’s shape is a vision of simplicity completed with just a few strokes,” said Max Wolff, Lincoln design director. “Our movement as a brand is toward something we call elegant simplicity. It’s something warmer and more restrained, which is moving away from complex designs and traditional luxury.” (View a video highlighting the main design elements of the Lincoln MKZ Concept here.)

Warm hues are evident in every aspect of the new vehicle’s Cognac-colored exterior. The deep finish is achieved with a rich base coat covered in multiple layers of tinted clear-coat finishes.

By retaining key, recognizable brand design elements, the MKZ Concept remains clearly identifiable as a Lincoln. One example is the more refined interpretation of the split-wing grille, introduced on the 1938 Lincoln-Zephyr. (Click here for image.)

The sedan’s profile is dominated by a long, sleek and sweeping roofline that allows the design to break away from the traditional sedan three-box shape. The lengthening of the roofline enables a more flowing, elegant and more naturally aerodynamic appearance. (Access Lincoln MKZ Concept specifications here.)

A panoramic glass roof spans uninterrupted from the windshield to the top of the backlight. Integrated into the sedan’s aluminum and boron steel superstructure, the fixed-glass expanse extends to the side roof rails of the cabin, creating an airy, open interior. (Click here for gallery.)

The Lincoln MKZ Concept’s four-seat interior is open, warm and inviting. “The front graphic is repeated in the dramatic sweep of the instrument panel, helping tie the interior to the exterior. These flowing forms create a comfortable and functional interior that particularly appeals to the younger, more diverse customers we are targeting,” said Wolff.

Responsibly harvested poplar wood, aluminum in bright and satin finishes as well as leather help create a sculptural, luxurious and comfortable interior space. Champagne-colored leather seats with dark taupe accents feature a champagne perforation pattern, so-called because the perforations on the seat backs conjure the image of champagne bubbles rising from the bottom of a glass.

The Lincoln MKZ Concept is a styling study that rides on an all-new midsize platform. The sedan is capable of utilizing multiple powertrain options in front-wheel-drive and all-wheel-drive configurations.

Like the recently introduced MKS and MKT with EcoBoost™, the Lincoln MKZ Concept features Lincoln Drive Control and the sophisticated Continuously Controlled Damping (CCD) adjustable suspension. (Click here for information on these Lincoln technologies and here for background on the Lane Keeping System, another feature integrated into the MKZ Concept.)

The Business of Lincoln

“Lincoln is an important part of our company’s success,” said Mark Fields, Ford Motor Company president of The Americas. “The luxury piece of the industry is significant. In any given year in the U.S., the luxury segment is 11 to 13 percent of overall sales, and it is important for us to win customers in the luxury market with strong new vehicles. That is a key reason we have invested so heavily in Lincoln.”

During the past 14 months, Lincoln has built a dedicated team – including designers, engineers, quality and manufacturing experts as well as marketing and sales leaders. The team includes people from luxury brands, some outside of automotive.

“This team wakes up every morning thinking about Lincoln – and only Lincoln,” Fields said. “These are the people committed to delivering world-class vehicles with a customer experience to match.”

Many of the new team members begin working this year in the all-new Lincoln Design Studio in Dearborn, Mich.

Under Wolff’s direction, construction of the 40,000-square-foot studio began in early 2011 and ultimately will house more than 180 modelers, engineers, stylists and designers in a space that encourages creativity and collaboration.

“This is the first time Lincoln has had its own studio since the 1970s,” said Wolff. “Having our own space is critical to the continued development of the brand. We are passionate about creating beautiful, even seductive, vehicles – and the MKZ Concept marks just the beginning.”

Lincoln is the luxury automotive brand for Ford Motor Company, committed to becoming a world-class luxury brand with compelling vehicles and an exceptional ownership experience to match. Lincoln will introduce seven new and significantly refreshed models in the next three years. For all the latest information, please visit Lincoln at facebook.com/lincoln, media.lincoln.com or www.lincoln.com.