';
The general formula for a spec racing series doesn’t vary much worldwide. Teams and drivers compete in identical cars, powered by identical engines, with only driver talent (and a little luck) separating the winners from the losers.

India loves its motorsports, so it’s a logical place to launch a new spec racing series with a bit of a twist: each team will represent a major city in India, and will field two cars. One will be driven by an Indian driver, while the other team car will be fielded by a “ringer,” with quite a few “international driver” names coming from the world of Formula 1. 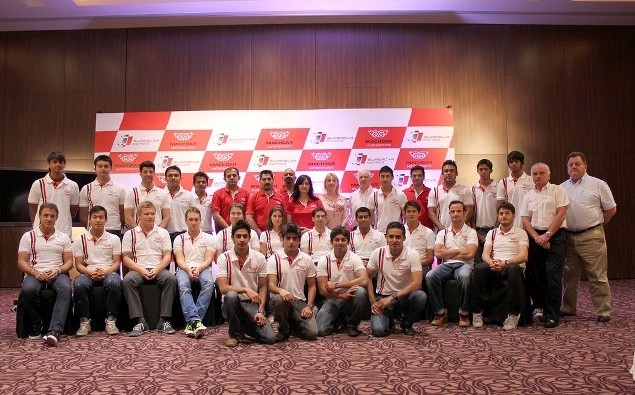 Some of the drivers behind the new i1 Supercar Series.

International drivers in the i1 Supercar Series will include Jacques Villenueve (the 1997 F1 World Champion), Giancarlo Fisichella (who’s driven for Force India, Ferrari and others), Vitantonio Liuzzi (who’s raced for Force India and HRT), Jean Alesi (who raced for just about everyone, from 1989-2001), local favorite Karun Chandhok (who drove for Lotus in 2011) and several other recognizable stars.

Drivers will compete in the Radical SR3 RS, an open-cockpit, LeMans Prototype-styled car that gets power from a 1.5-liter Suzuki motorcycle engine, tuned to produce around 260 horsepower.

That may not be Formula 1 levels of horsepower, but the Radical SR3 RS weighs in at less than 1,300 pounds and has a top speed of 155 miles per hour. In other words, it’s plenty entertaining.

The inaugural season will include ten races at five venues, beginning with Sepang, Malaysia on January 22. Next up is Bahrain, followed by Doha, Qatar; New Delhi, India and Abu Dhabi, UAE.

If you’re wondering what it takes to get so many former F1 drivers out of retirement, the answer is simple: there’s $2 million in prize money at stake.