Audi Sport has won the 24 Hours of Le Mans at the La Sarthe circuit in Northern France in one of the closest races in many years, but were it not for the strength and safety of the R18 TDI sports prototype, the weekend could have been very different.

Less than an hour into the race, star driver Allan McNish suffered a huge accident early in the lap when he clipped a lapped vehicle. Both cars launched across the gravel trap and the Audi smashed into the armco barrier, the resulting explosion of carbon pieces narrowly missing several spectators and photographers, ending up on its roof. You can watch a video of McNish's huge crash at our sister site, Motor Authority.

McNish stepped out of the car unaided, to sighs of relief all around the world. Little did anyone know that they'd witness a similarly serious incident just after 11pm local time when fellow Audi driver Mike "Rocky" Rockenfeller spun off the circuit whilst overtaking another backmarker on the straight following Mulsanne corner. At close to 200 miles per hour, the impact destroyed the car. Rockenfeller is again said to have left the car himself.

As in road vehicles, safety is paramount in race cars. In each accident, the driver was saved by a combination of safety measures developed through decades of technological advancement.

Key to each driver managing to extract themselves from the car was the carbon fiber monocoque that forms a safety cell in the middle of the vehicle. The whole shell is produced in one piece and this makes it incredibly light and rigid. The rest of the car is designed to disintegrate in a crash to absorb the energy with the carbon cell protecting the driver inside.

Minimum weight for the LMP1 sports prototype class is under 2,000 pounds but Audi builds the car even lighter so it can make up the difference with ballast.

To further driver safety, a HANS head and neck safety device is mandatory (and have been ever since the death of Dale Earnhardt Sr) in addidion to a full-face helmet and overalls, and the drivers are cocooned in a specially moulded seat with a full race harness to hold them in place during heavy impacts.

New for Audi in 2011 is also the closed-cockpit design of the R18 TDI, which almost certainly contributed to both drivers remaining unharmed. The situation might have been very different in older open cockpit racers.

Ironically, one of the active safety measures, the R18 TDI's ultra-bright LED headlights, might have been behind Rocky's accident. The headlights are so bright that they can potentially disorientate drivers in front and this could have resulted in the lapped vehicle inadvertantly blocking Rockenfeller as he passed, leading to the spin. 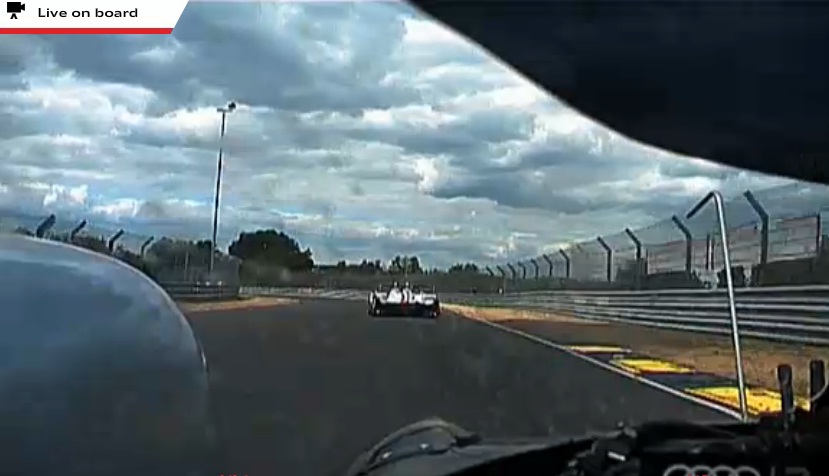 They say that racing improves the breed, and whilst you'll find little of a Formula One car in your daily driver, Audi insists that its Le Mans technology has real-life applications.

"Everything that we have learnt about motorsport over the years - especially about lightweight design and construction during development of the R18 TDI will also be available for our customers in the future" explains Dr. Wolfgang Ullrich, Head of Audi Motorsport.

He goes on: "Carbon fibre is ideally suited for lightweight design and construction". Ullrich wants technology such as the carbon monocoque to enhance road cars, benefitting performance, economy and emissions. Road-going Audis have already benefitted from TSI direct-injection gasoline technology, extra TDI turbodiesel development and LED headlights, all of which have been seen on Le Mans Audi cars.

All Car Tech would like to congratulate Audi on its victory with the number 2 car driven by André Lotterer, Marcel Fassler and Benoît Treluyer.

We're relieved that the drivers of the other vehicles walked away unscathed, and the technology that helped them could soon help drivers everywhere. Dr. Ullrich sees big things for strong, ultra lightweight technology:

"I’m convinced that ultra will be mentioned in one breath with terms like quattro or TDI in a few years".