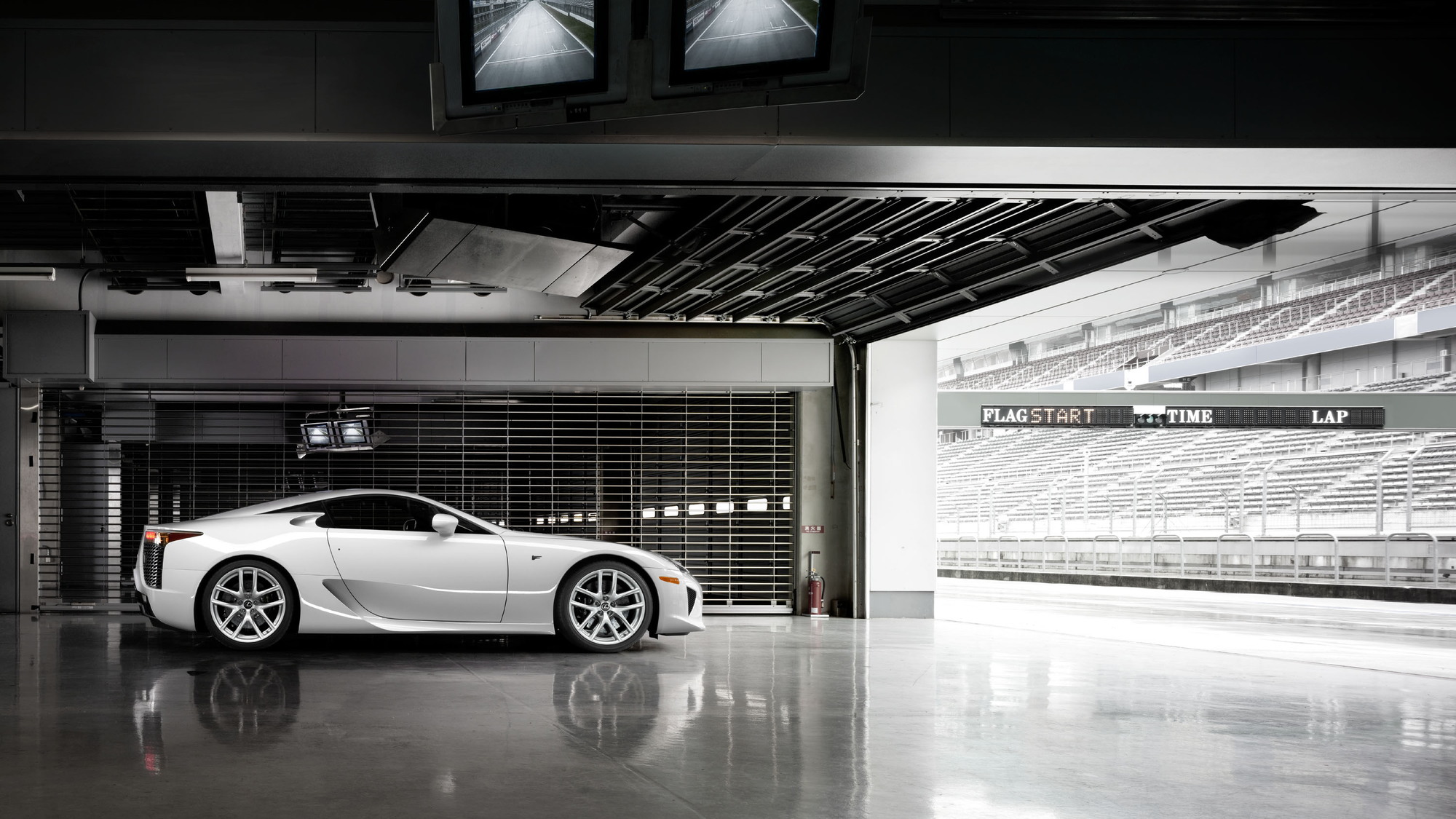 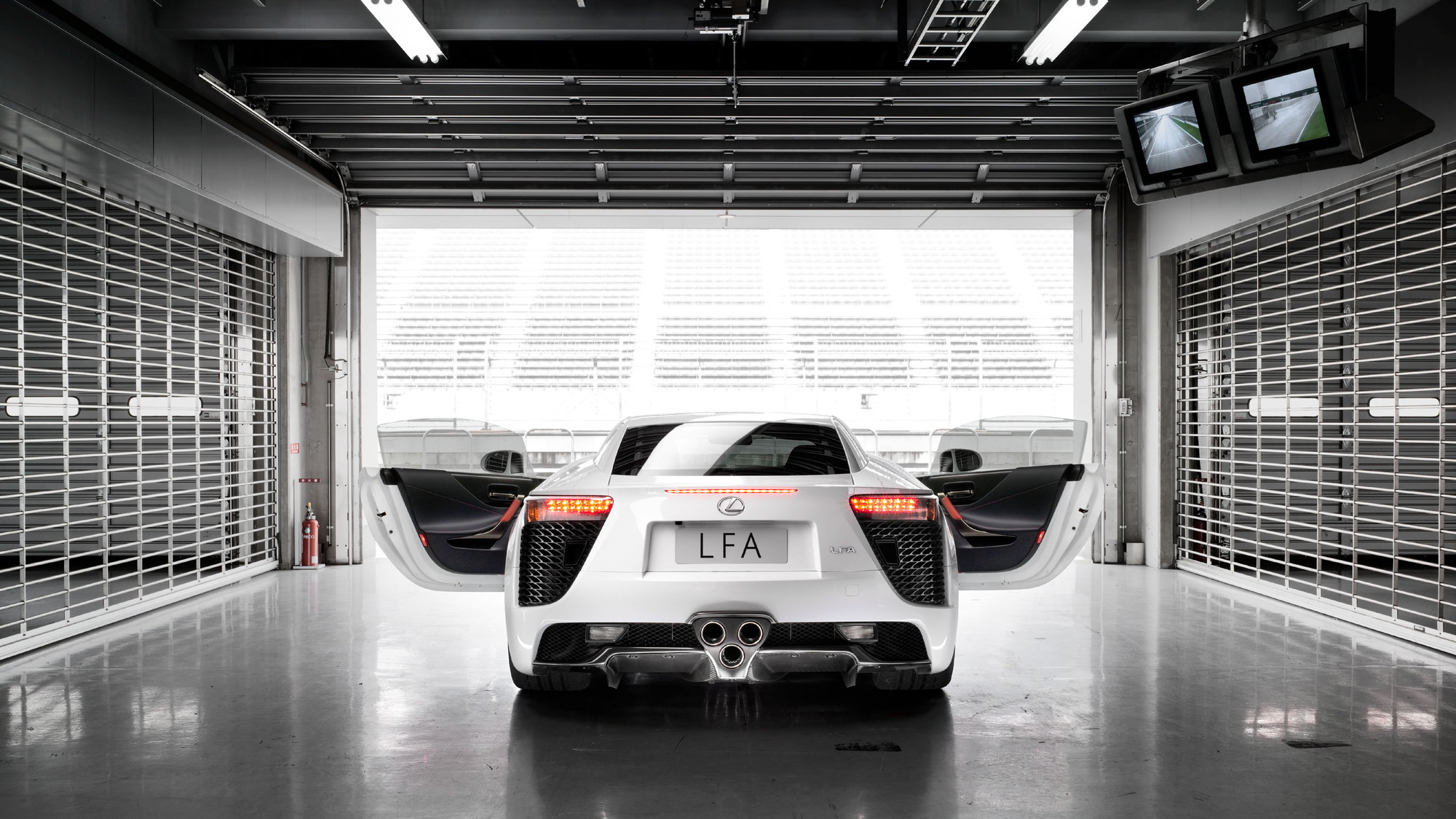 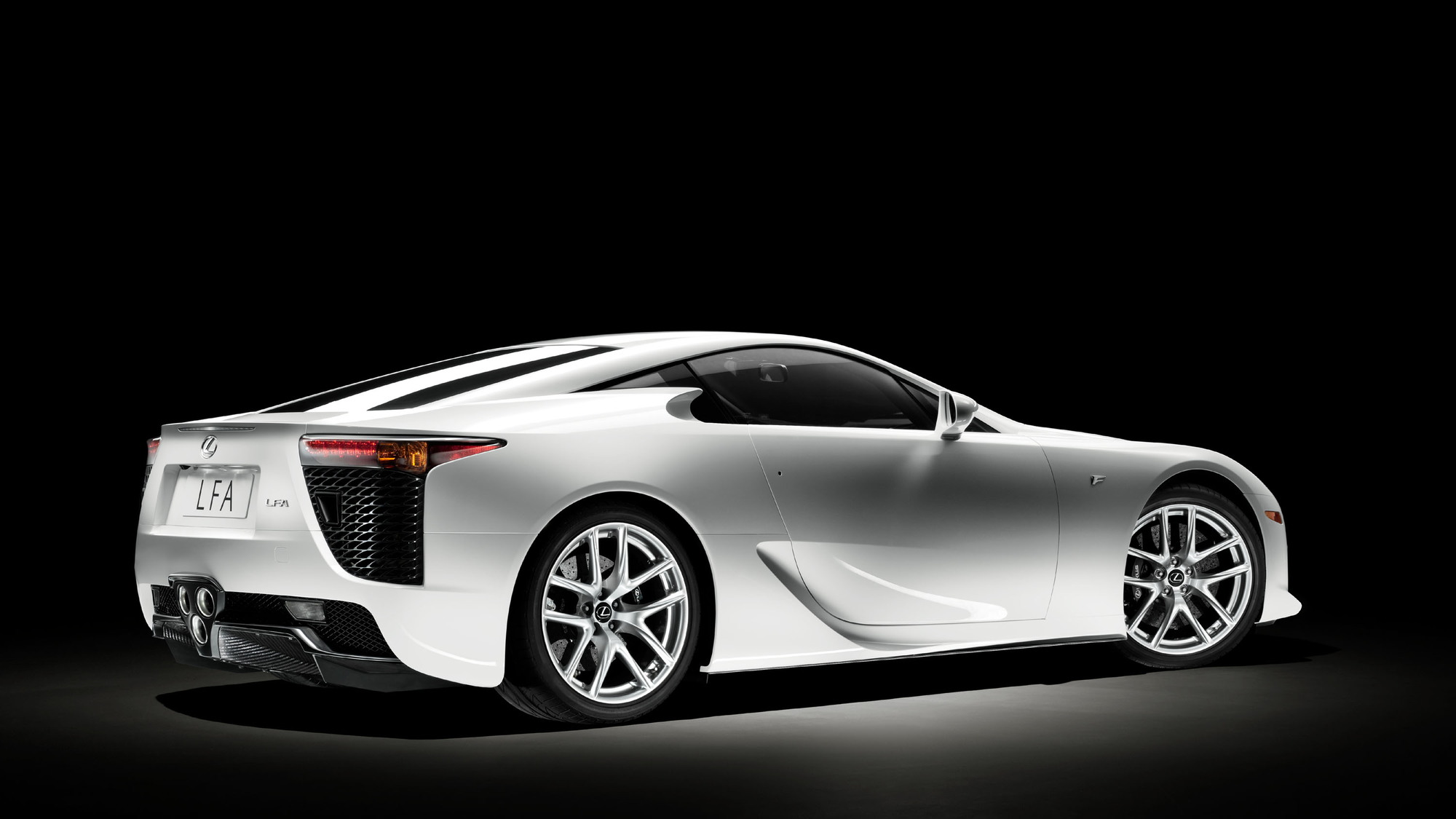 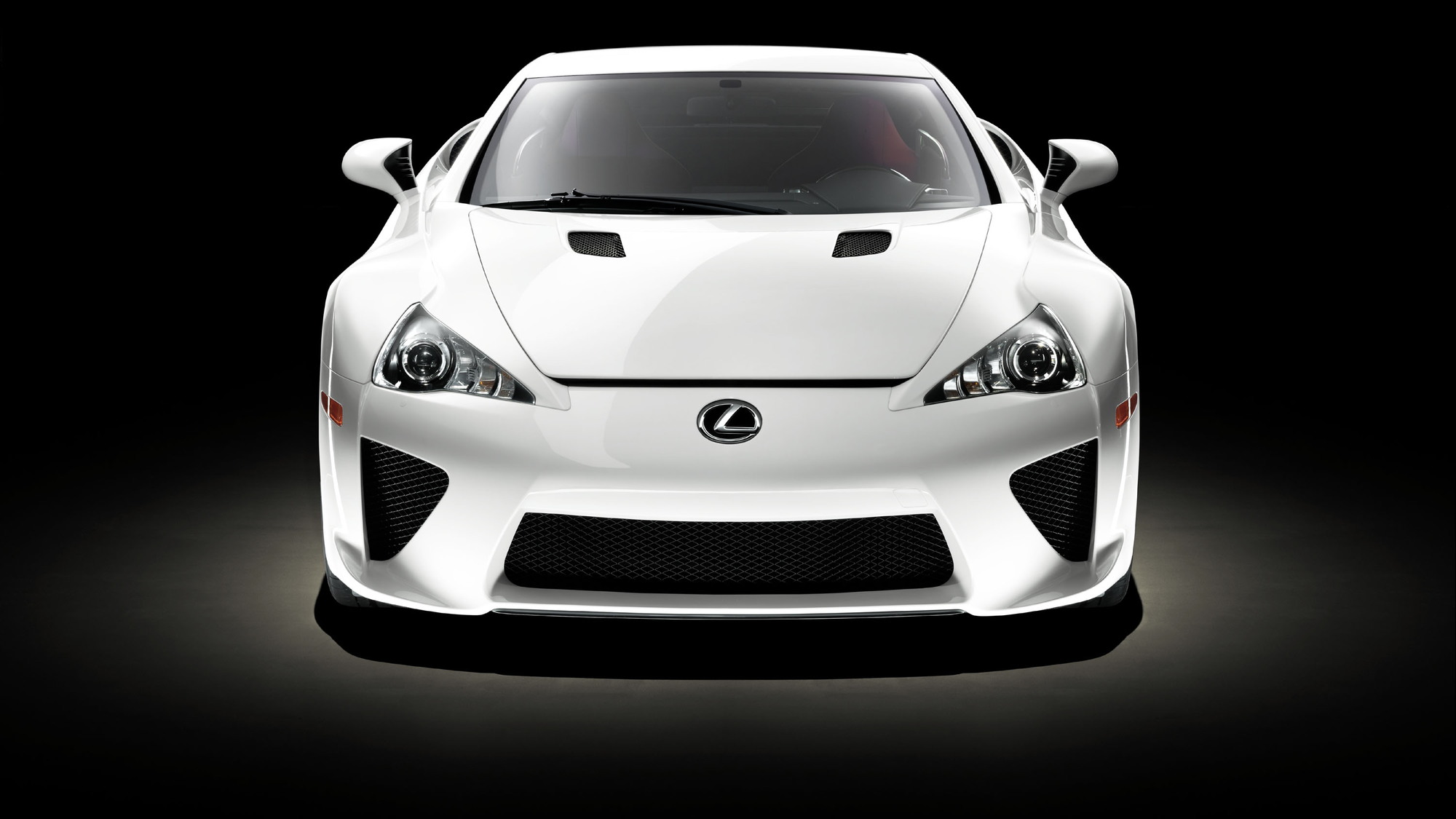 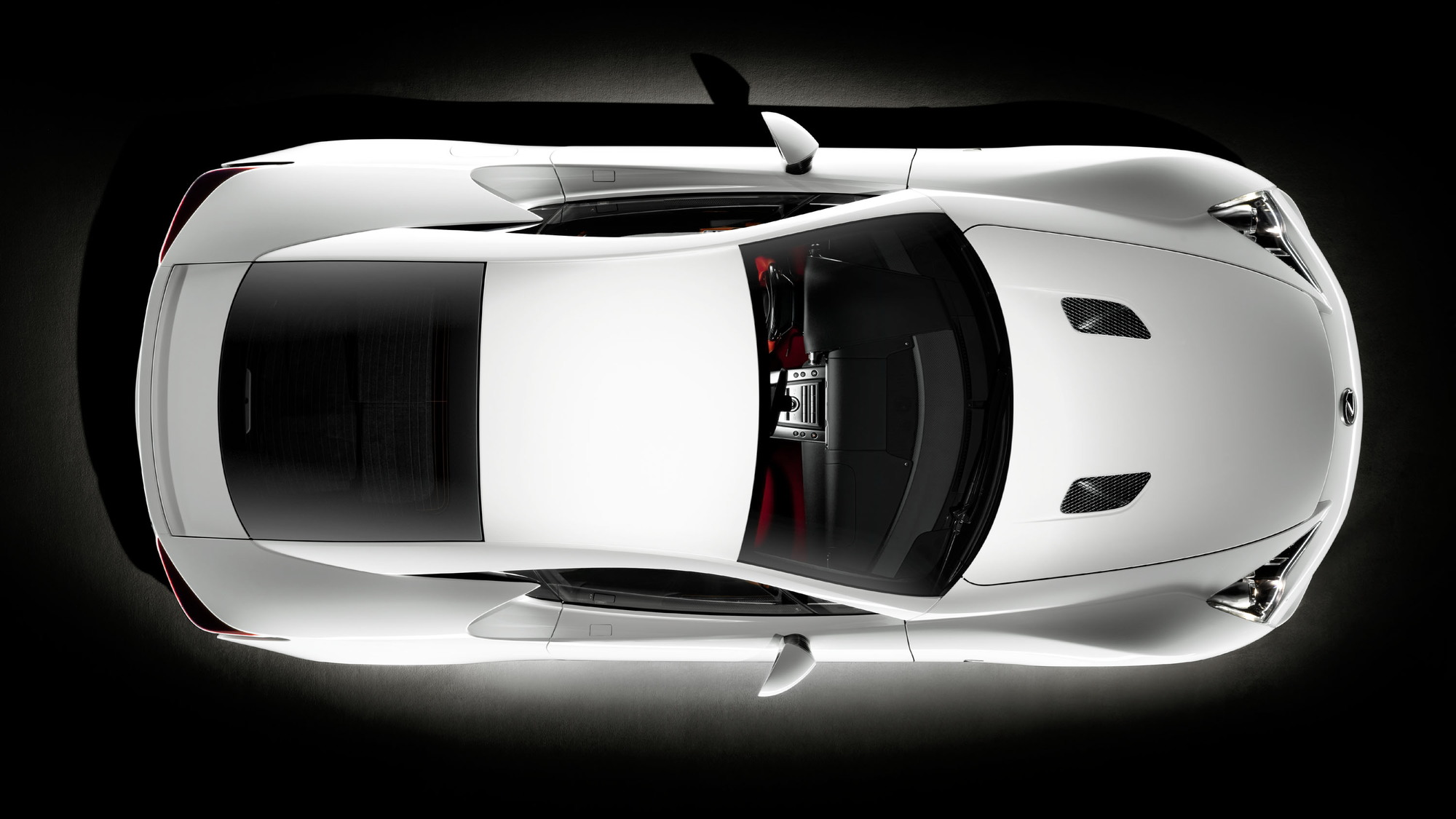 There's no denying the Lexus LFA is far and away the greatest combination of engineering feats achieved by Toyota outside of its Formula 1 ventures. In fact, it uses many of the lessons learned in the sport. But for all of its technological prowess, was the LFA a waste of time, money, and effort?

The question was prompted by our observations of many LFAs present at track demonstrations and other events. This struck us as unusual because the LFA is an extremely limited-production vehicle. Just 500 examples were to be built from the outset, at a rate of only a handful per month hand-built by Lexus' top-level technicians. Typically, such cars are hard to find at all, much less being put to hard use on track. It's all the more bizarre considering the full run was supposedly spoken for, or nearly so, very early on. What need is there to entice buyers of a car that's already sold out?

Part of it could be explained by Lexus' stated desire to see the cars on track, doing what they were built for, not moldering in a collector's garage. But not all of it--there had to be something else at work. So we contacted Lexus' American arm and asked about production and sales figures. The results were surprising.

Slow sales?
Only 90 LFAs have been built to date for worldwide sales. Of those, 22 have been delivered to the U.S. Lexus says it doesn't know precisely how many have been delivered world wide, as some may still be in transit. Even allowing that all built are spoken for, there's still another 410 units to go in its limited run.

The LFA has been in production since last December. At the current rate, it will take another 27-28 months for the remaining 410 cars to be built. That will extend its run into the end of 2013--not at all unheard of for any car, especially a hyper-limited run of very expensive cars. The nearly $2 million Bugatti Veyron, for example, has been in production since 2003 for a run of just 300 cars, including the many special editions. Even so, the rate of LFA production now sits at about 15 cars per month, short of Lexus' stated production goal of 20 per month. With each car intended to be built to order, to the customer's precise specifications, operating below theoretical capacity indicates a shortfall in demand. [Update: Lexus wrote us to point out that LFA production, like most other industries in Japan, was disrupted for some time due to the earthquake and tsunami that ravaged the country. It's a fair point and does explain some of the shortfall in output and sales, though perhaps not all. Time will tell about the remainder.]

There were reports last year--quickly reversed by Lexus--that the LFA had sold out, despite its hefty $375,000 price tag and, in the U.S., restrictive leasing conditions. Even though Lexus corrected the erroneous sold-out status, it indicated, vaguely, that only a few slots were remaining. So how, then, could we formulate our question in such cold terms?

It's simple, really: compared to other cars of its performance caliber and status, the LFA is barely selling at all. Lamborghini's recently-released Aventador, for instance, has already sold the entirety of its first-year allotment of cars through pre-order--before it was even available for testing. Likewise, the Ferrari FF's full year's run of 800 cars sold out in pre-order as well. The Aventador sells for about $370,000, while the FF sells in the neighborhood of $360,000, putting both on equal footing with the LFA in price.

Image is everything
Does it come down to the much-discussed brand cachet issue? Everyone knows the status and impact the Ferrari and Lamborghini marques carry, thanks in part to their perennial stratospheric market positions. Lexus, on the other hand, was introduced in America--a decidedly gauche nation, to many outside eyes--as an affordable luxury brand that nonetheless delivered the amenities of the good life. Can that same brand pull off a halo supercar so far removed from its brethren? Though unsubstantiated by data, that is a popular sentiment among the media and supercar owners alike. Other explanations, such as relative performance (Ferrari and Lamborghini both make cars that will run with the LFA for about half the price) weigh in as well.

Whatever the cause, the slow sales prompt the question: was the LFA worth it to Lexus? Considering the massive investment of time and R&D budget in the project, plus the projected loss of money on every car sold, the failure of the car to resonate with its ostensible intended market may be the strongest indicator that it wasn't.

Lexus has delivered a handful of justifications for the LFA project over the years: it washes the lower-run Lexus performance cars in a sheen of the truly exotic; it serves as a proving ground for next-generation construction and technology; it raises the brand's perception as a whole among the upper echelon of the automotive elite. Well and good, assuming any of these prove true (and, as noted above, we have reason to believe they haven't so far). But how does the return compare to the investment?

A decade of development
To measure that, we have to look at what Lexus put into the LFA. Development began in early 2000, with three years of research and testing before the first prototype was built in mid-2003. Another two years of study elapsed before the first concept car appeared in January 2005, at the Detroit Auto Show. Even then, it was clearly a concept; side-mirrors were replaced by cameras, a heavy and impractical (in super/sports car terms) glass roof was fitted.

Despite rumors of its production-intent status, the car stagnated. Over the next two years, it underwent a radical redesign, switching from a more conventional aluminum frame to a carbon fiber basis due to growing weight concerns. The first of the redesigned LFA concept cars showed in January 2007, again in Detroit. At the same show, the Lexus IS-F debuted, the first--and thus far, only--example of Lexus' long-rumored F Performance line. If the goal were simply to bathe the IS-F in the light of the LFA's technical excellence, the job could have been considered complete at that point--the proof of concept showed Lexus had the technical and design capability.

But it wasn't to end there: over the course of 2007, the powertrain became the subject of vacillation and change. The 2005 concept was touted as generating "more than 500 horsepower" from an engine displacing "less than five liters," though exactly what form that engine would take--V-8, V-10, something else--was not revealed. The 2007 concept brought with it the promise of a V-10 layout. But between the 2007 concept and the 2008 Roadster concept, there were indications that Lexus was considering a possible V-8 engine paired with a hybrid drivetrain not unlike the LS600h L's. Yet another sinkhole for R&D dollars, and one that ultimately bore no fruit.

Returning again to Detroit, in 2008, the LF-A Roadster concept was unveiled, cementing the role of the V-10 engine, but this time showing it without the top. Lexus intended it, along with the dramatically restyled exterior details, to demonstrate the realm of possibilities enabled by the LFA's new-found carbon fiber construction. Though it isn't clear that the Roadster was ever intended for series production, it was this model that debuted many of the production-oriented design features of the car. One has to wonder how much time and effort was sunk into making it a suitable stiff, competent supercar in drop-top form.

Move forward another year to 2009 and the industry, fully in the midst of freefall, and still Lexus marched forward at its achingly slow pace with the LFA. In October, the production model was finally revealed at the Tokyo Motor Show. The order books opened two days after its debut, but even then, it would be another 14 months before the LFA finally entered production.

Was it all worth it?
Throughout this arduous, decade-long development process, Lexus pumped untold amounts of money into the LFA. Billions of dollars would not be beyond the pale. Lexus has never disclosed the exact figure. And still, after all of it, the LFA came to market at twice the price of cars at performance parity--and Lexus is losing money on each one, adding further to its expense.

Now, at the culmination of the project, it's worth looking back and asking if that expense was worth it--if it can, even possibly, deliver on the goals placed at the outset.

Undeniably, the LFA is a feat of engineering and design. Its high-tech carbon fiber and aluminum underpinnings lie near the outer boundary of technological feasibility even today, nearly two full years after its final production form was revealed. Its engine is a thing of sonorous beauty, inspired by the F1 program that went defunct in the same year the LFA was finalized, ripping 9,000 rpm out of its 4.8-liter displacement on the way to 552 horsepower and 354 pound-feet of torque. The high-tech instrument panel looks and behaves like something from the near future.

But it took Lexus 10 full years to reach this point, and a budget that would likely amount to the full purchase price of the entire organizations of either Ferrari or Lamborghini. And for all its aspects of technical advancement, it lags noticeably in others: it uses a hydraulically-actuated single-clutch transmission, for example, rather than the advanced dual-clutches of most of the competition; its suspension is fixed, unlike the dynamic systems fitted to many other supercars, much less the pushrod suspension of the Aventador; its outright performance is matched or eclipsed by perhaps the lowest-tech of all supercars, the Corvette ZR1, a mere one-third the price of the LFA; its carbon fiber tub is matched or surpassed by the carbon fiber monocoque of the Aventador; on measures of power, torque, top speed, and acceleration, it's a full generation behind the top tier of supercars.

To fall short, then, despite this massive investment of time and money, seems to paint Lexus' technical ability in a different light. Despite applying what appears to be near-limitless resources for a decade, Lexus was unable to deliver a car to fully compete with, let alone dominate, the competition. Further, it was unable to do it at a profit on the individual cars sold, much less the project as a whole. In fact, viewed from this perspective, the whole LFA endeavor seems to fit more securely with the reality and, in the wake of the many recalls of the last two years, acknowledged self-image it not long ago promised to correct: that of a mired bureaucracy, hamstrung by its own internal inefficiencies, bent on leading the world but blinded by its own insularity.