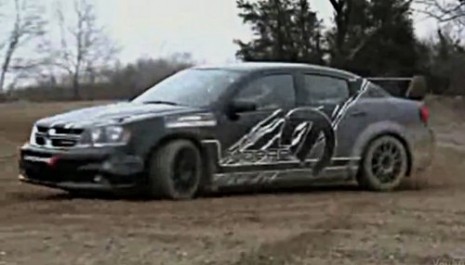 Earlier this week Chrysler made a cryptic announcement that it would unveil a new strategic partnership, a new production car, and a new "race-inspired" project car, with both vehicles to be on display at the New York Auto Show. Today, Chrysler let the race-inspired project out of the barn, and with it, the strategic partnership with Magnetti-Marelli. The result? A Dodge Avenger rally car.

Mopar's contributions are, as you might expect, mostly in the power and appearance department: an exhaust and intake boost output from the stock 283 horsepower to 300, an 8-point roll cage, and unique Mopar/Magneti-Marelli graphics.

Oddly, the project rally Avenger appears to be little more than a demonstration of what's possible: there have been no plans announced to run the vehicle in competition.

As for the production car that'll be sitting beside the rally car at the New York Auto Show next week? That's still a mystery, but we'll be on hand to bring you the live shots and info as soon as it's unveiled.