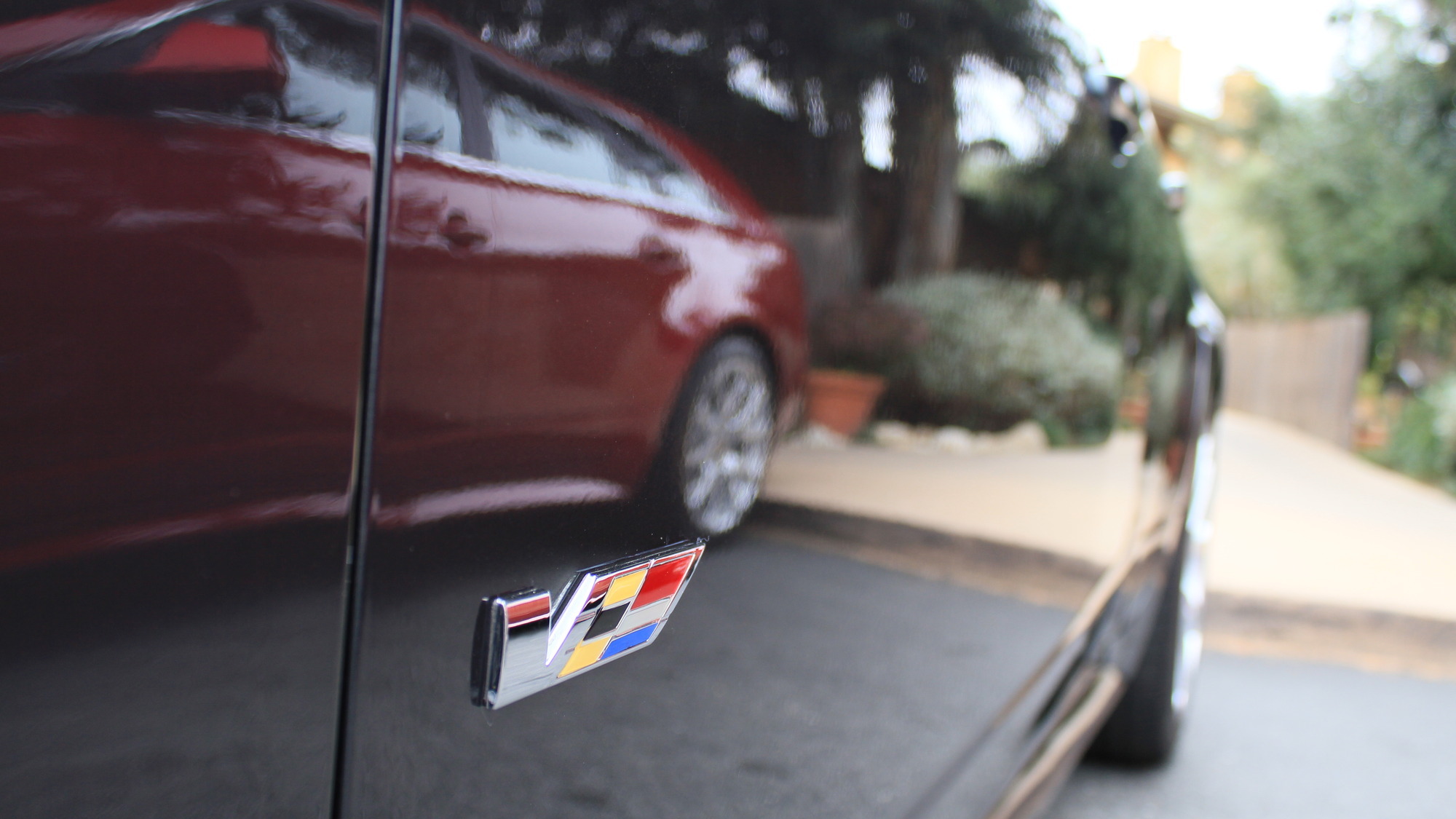 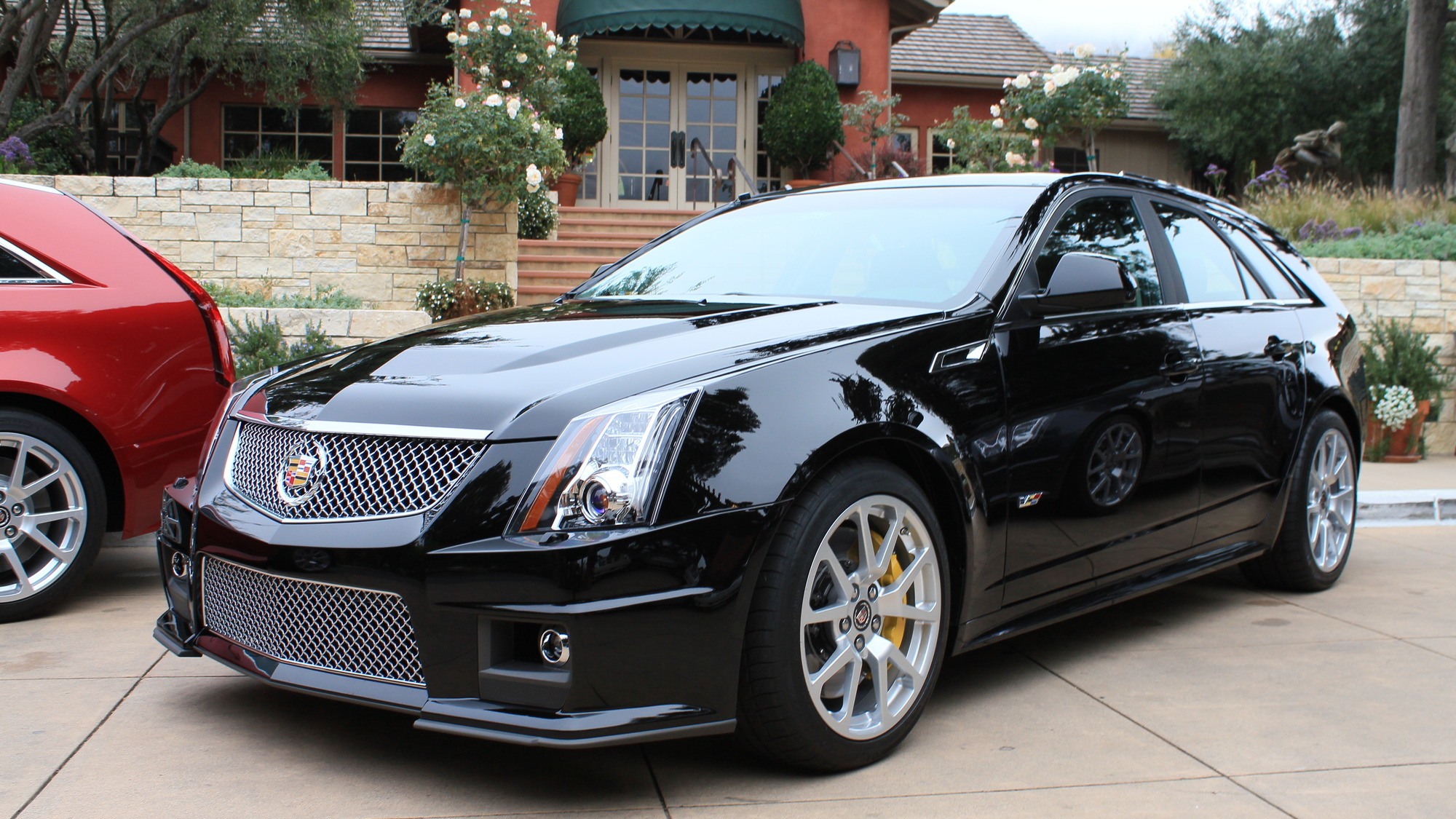 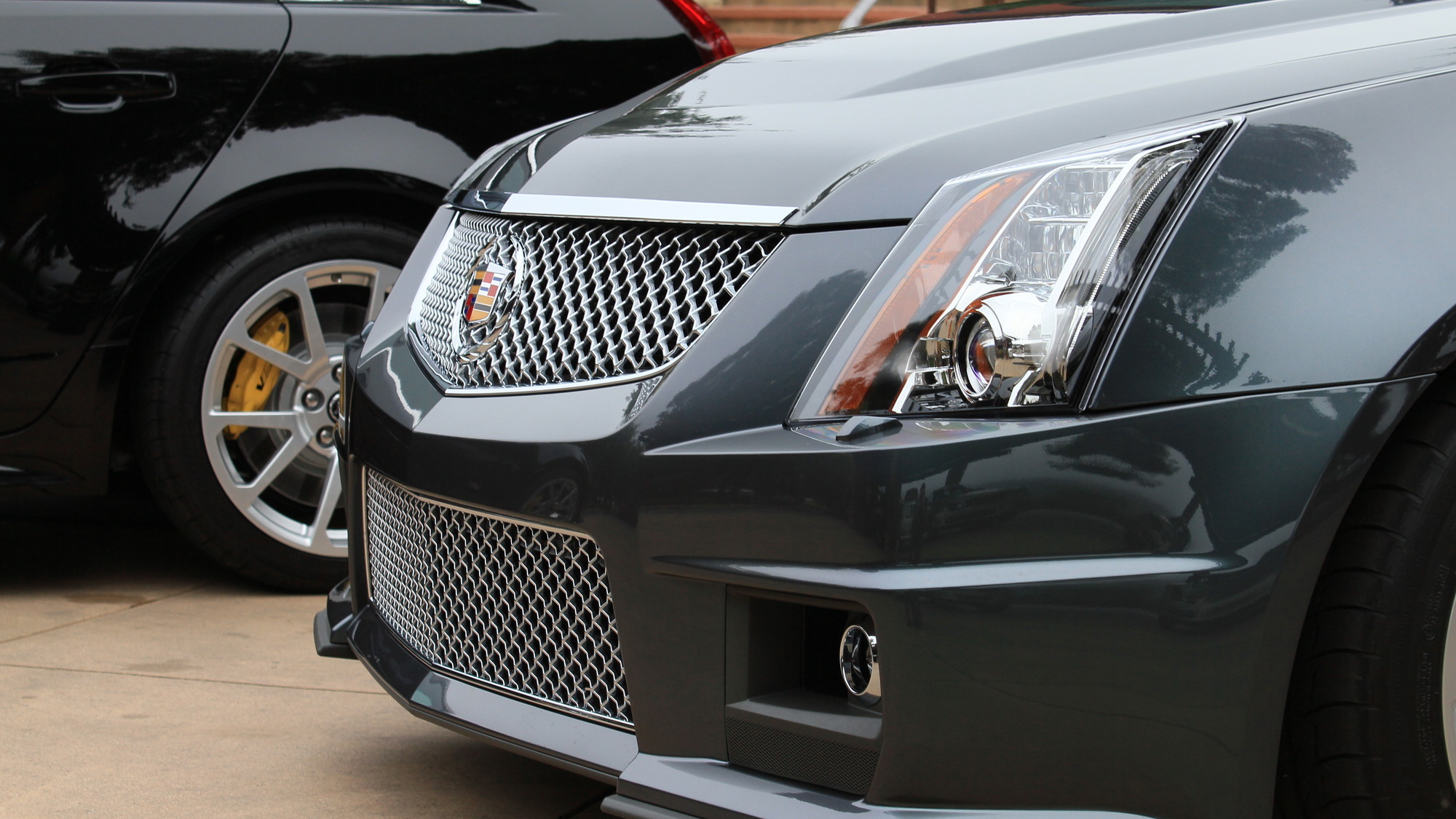 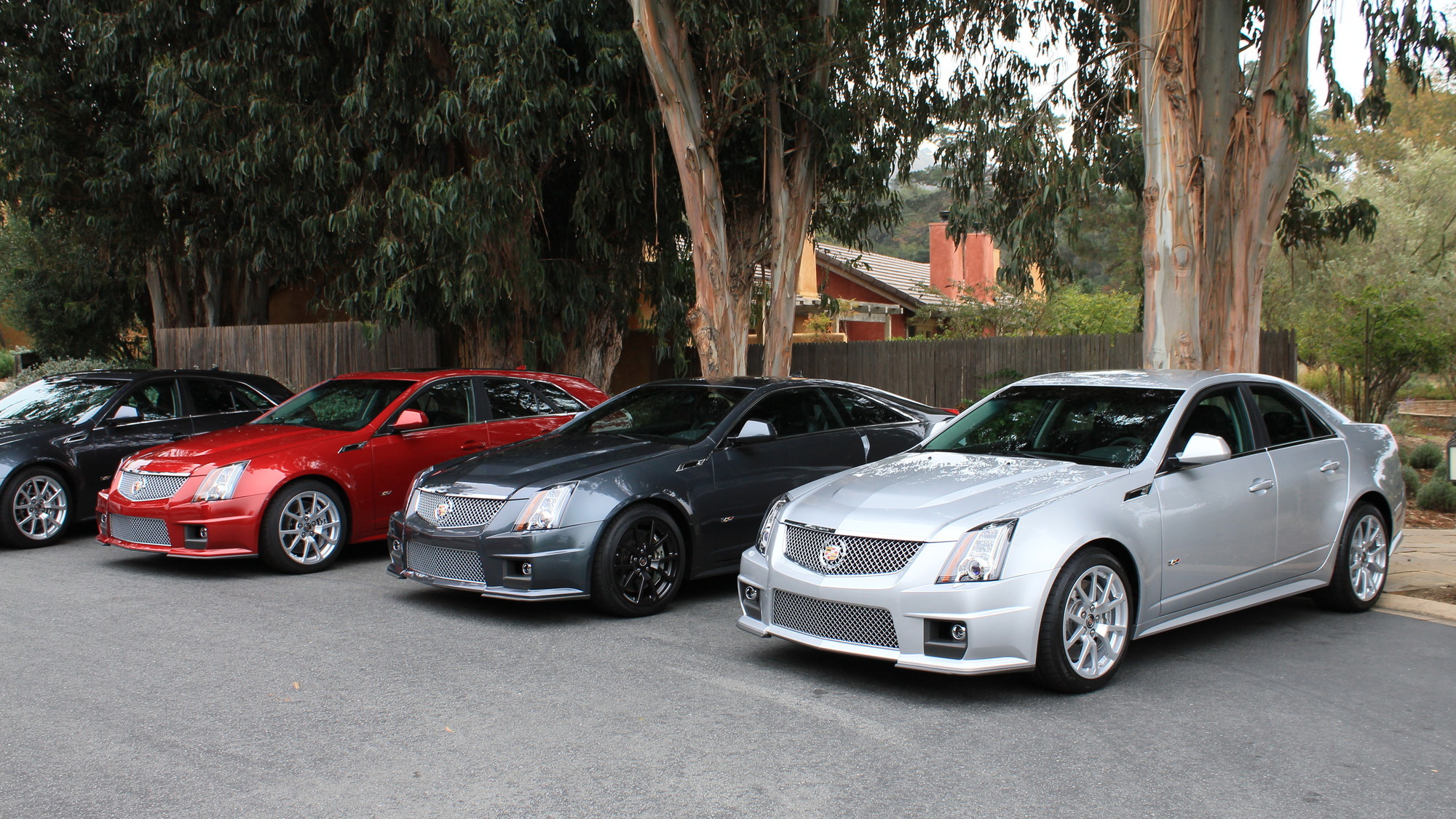 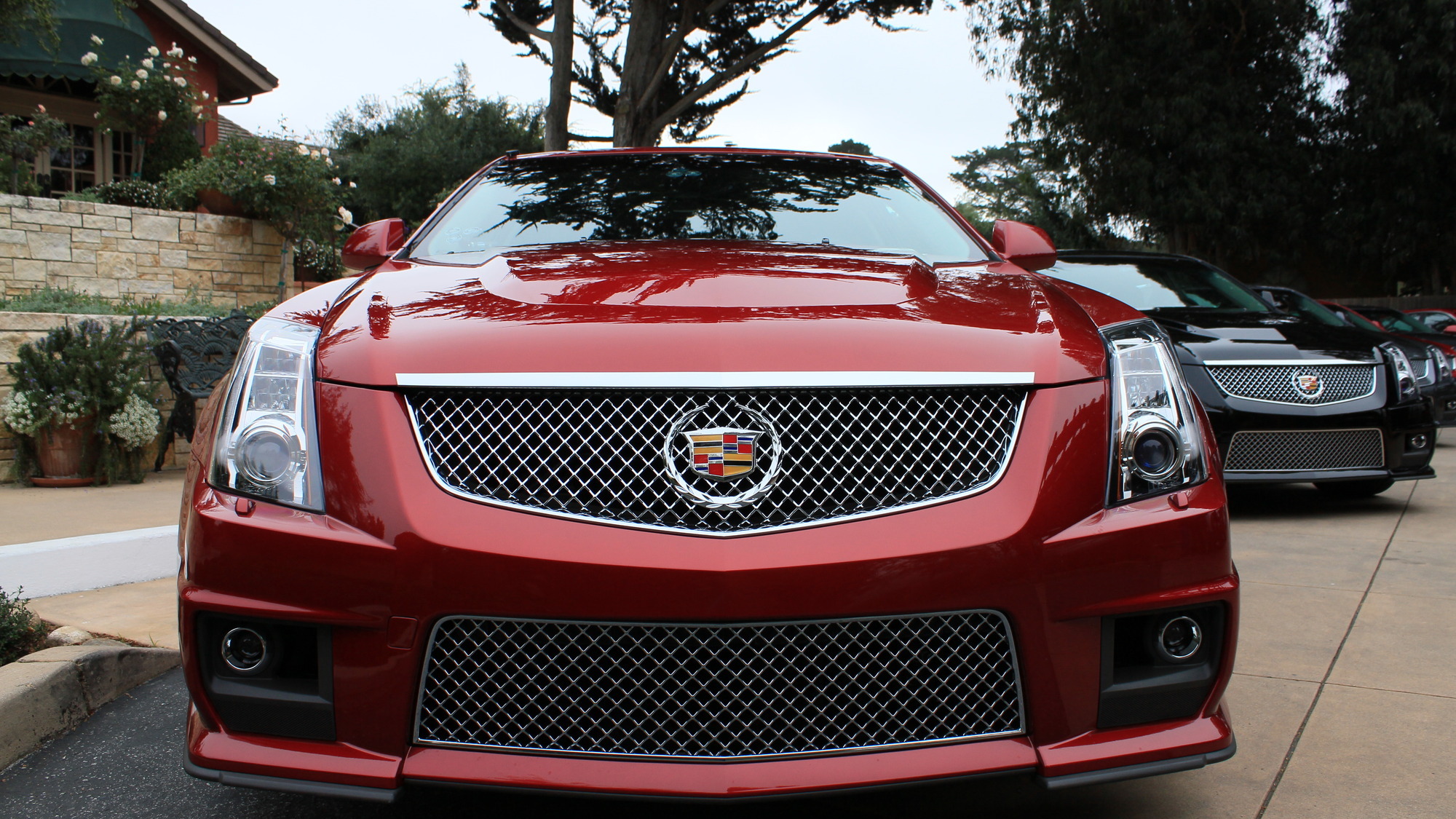 Press launches are odd things, especially when you're dealing with a 556-horsepower super-wagon on a track you've never driven before. Limited time, restricted driving conditions, and unfamiliarity can conspire to put more noise in the signal you're getting from the car than you can filter out. But the 2011 Cadillac CTS-V Wagon rises above the static to deliver one clear message: this wagon is serious.

Serious about performance despite also being serious about luxury accomodations and a quiet, composed cabin. Serious about value despite offering a standard Bose 5.1 surround sound system, heated leather seats, 40-gigabyte nav, and magneto-rheological active dampers. Serious about style though it can haul the kids and the groceries better than any sedan.

If you've read about the rest of the CTS-V lineup, you know what to expect of the Wagon: its stats are the same, or nearly so, from power to weight to performance. Boring, you might think, then, to drive yet another iteration of a familiar car. On the contrary. It's incredibly exciting to drive a wagon with almost identical performance to what is one of the world's fastest production sedans around the Nurburgring (the $132,000 Porsche Panamera Turbo has since taken the title by about three seconds). And an American wagon at that.

Power on demand, ample torque in nearly any gear, an ability to slide the tail at will but a willingness to remain neutral and compliant at the limit even with all the electronic nannies turned off, the 2011 Cadillac CTS-V Wagon is, simply put, a brilliant performance car. We prefer the six-speed manual, but the automatic transmission is fun and engaging, though it displays a slightly annoying tendency to hesitate on near-redline upshifts. The 4,390-lb curb weight impacts braking and transitional performance, meaning you'll have to plan ahead when seriously moving, but the computer-controlled magnetic dampers help, anticipating your every move, reacting to driver inputs, surface changes, and its own known limits to make the car do almost exactly what you want.

I say almost, because toward the upper limits of the car's range, particularly with the electronic aids still engaged, the V-wagon does show some tuned-in limitations. Rather than holding the outside rear full stiff in a fast corner, for instance, the damper will soften and let the car roll a bit more. Whether it's to prevent oversteer or induce understeer, the effect is the same: an artifical cap on the car's capability, put there to keep over-eager drivers from getting bitten by the massive teeth of the car's power and torque.

Almost, as well, because of the steering. As we've noted in nearly every CTS or CTS-V review thus far, the car's steering is a bit numb. Vague on-center feel, slightly over-boosted off-center at medium speeds, and generally without the feedback and feel you'd really like to extract the most from the car. But then you remember this is also a luxury wagon in addition to a monstrous performer, and the compromise makes sense, even if the more hardcore would prefer the balanced tipped the other direction.

Nonetheless, you can see from the video that the car would have turned something in the upper 1:40s or lower 1:50s for a full lap around Laguna Seca even in our hacky, eight-laps-experience at Laguna journalistic hands--and even with having to soft-pedal it between turns 5 and 6, a key uphill acceleration point, to keep from running afoul of the very restrictive track sound limits.

On The Road
Smooth, easy-going, and relatively quiet (given the large tires) the 2011 CTS-V Wagon is every inch the ultimate American highway machine, just like its sedan and coupe sisters, but with the added space and utility of its longer back end. Just as you'd expect.

No, it's not going to win any green awards, but it won't drive you to the poorhouse paying down gas bills either--despite the EPA rating of around 14/19 mpg, low 20s on the highway are easy, mid 20s if you can keep your foot out of it on the on-ramps. Around town the weight and power combine to keep figures in the mid-to-upper teens.

Unlike the regular CTS wagon, sedan, and coupe, the CTS-V line also has the ability to avoid the range's one major pitfall: the uncomfortable standard seats. Fit the $3,400 heated/ventilated/adjustable-bolster Recaros, and problem solved: the ridge down your back is gone, and anyone can find a fit that will allow hours of comfortable cruising.

At The End Of The Day
There's no avoiding it: the 2011 CTS-V Wagon is one badass car. It's almost everything we want in a luxury wagon plus the performance of a car twice its price. That's why we chose it as our 2011 Best Car To Buy, and our time around the Monterey Peninsula and Laguna Seca just confirms it: this is the best do-it-all car you can buy for around $65,000.