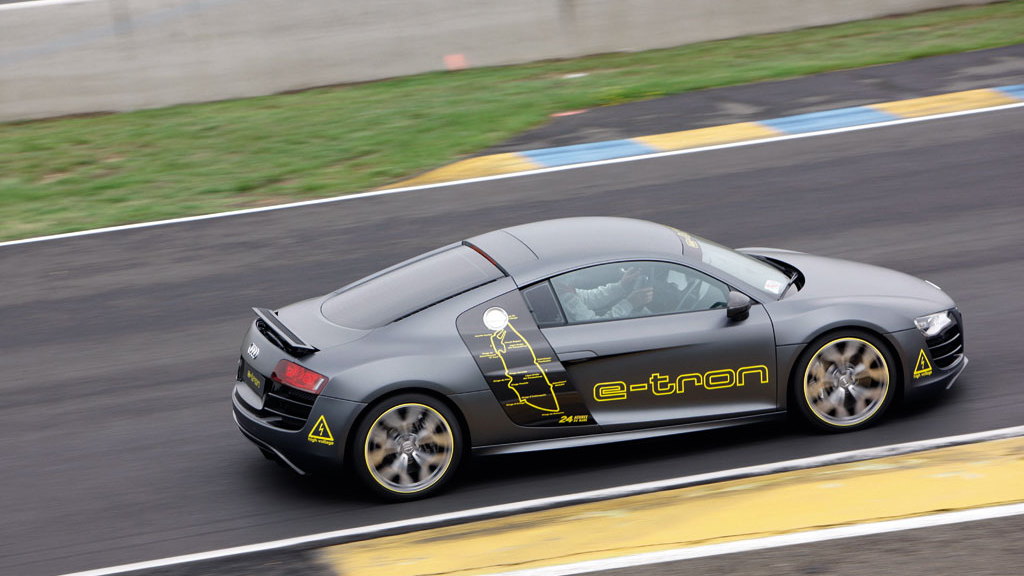 To date, electric cars have largely been the golden children of the green movement. As sleek or stylish as they may be, they're often equally boring behind the wheel (the Tesla Roadster being a notable exception). But the future may hold as much in the way of performance and luxury for EVs as it does frumpy little econoboxes, and the Audi R8 e-tron, fresh from a demo run at Le Mans, is toward the front of that curve.

Soon it will move the bar even higher, participating in three stages of the "Silvretta E-Auto Rally Montafon 2010." The route will take the car through the Austrian state of Vorarlberg along a 104.08-mile path. Audi board member Michael Dick and factory Audi racer Lukas Luhr will drive the car. Interestingly, the car being used isn't the most recent e-tron concept, but the previous R8-styled version.

The four-motor, all-wheel-drive R8 e-tron delivers 313 horsepower, 4.8-second 0-62 mph sprints, and a top speed of 124 mph. Like the standard R8, power is biased toward the rear, with a roughly 30/70 percent front/rear split. Audi says the prototype/concept car exhibits "extremely neutral" handling, thanks in part to the four-motor system's ability to minutely and near-instantaneously add power where it's needed to keep the car on its intended course--without cutting speed.

As for the battery pack--a prime concern when heading out 100 miles in one direction, even with a factory support team at your back--it can be charged in just 2.5 hours from a 400-volt, 63-ampere source. Audi hasn't said how far the car can go on a single charge, or revealed the capacity of the pack, however.

If you want even more details, you can read the press release on page two.

INGOLSTADT, Germany, Jul 8, 2010  -  Audi has entered an e-tron technology platform wrapped in the skin of an R8 in the Silvretta E-Auto Rally Montafon 2010. Michael Dick, Member of the Board of Management of AUDI AG for Technical Development, and factory driver Lukas Luhr will pilot the electric sports car along the 167.5 kilometer (104.08 miles) route through the Austrian state of Vorarlberg. After debuting with a demonstration run at “Le Mans vers le futur” as part of the 24-hour race, the Audi R8 e-tron will now be competing in three stages.

“We already received very good feedback on the Audi R8 e-tron in Le Mans,” says Michael Dick, Member of the Board of Management of AUDI AG for Technical Development. “In Montafon, the e-tron will put its potential to the test in ten different mountain, valley and timed special stages. This is a good opportunity to showcase Audi's integrated approach and to experience the fascination of electromobility in a sports car on the road.”

The technology platform vehicle wrapped in the skin of an R8 demonstrates that the Audi e-tron belongs in the major leagues of electric sports cars. The package does justice to all of the specific realities of an electric vehicle: The water-cooled, lithium-ion battery is located directly behind the passenger cabin for an optimal center of gravity and axial load distribution.

With the R8 e-tron technology platform, Audi is providing an insight into the development work. The requirement specification for the production concept goes far beyond battery technology and the replacement of a combustion engine with an electric drive system. The interaction of all components has a decisive influence on efficiency, range and practicality.

Design and package
One glance is all it will take for the fans at the Silvretta E-Auto Rally Montafon 2010 to recognize the caliber of the car: Based on the R8, this Audi e-tron has a wide, powerful road stance. The trapeze of the single-frame grille dominates the front end and is flanked by two large air intakes. 1.90 meters (6.23 ft) wide, just 4.43 meters (14.53 ft) long and 1.25 meters (4.10 ft) tall – those are the proportions of a supercar. The wheelbase of 2.65 meters (8.69 ft) leaves plenty of room between the axles for people and technology. The sporty proportions offer enough room in front of the rear axle for the battery unit and the power electronics.
The special package of the Audi e-tron technology platform provides for a 42:58 distribution of weight between the front axle and the rear axle, and thus for optimal balance and driving dynamics.

Because systematic lightweight construction is also a crucial prerequisite for the efficiency and range of electric cars, the Audi designers tapped into one of the company's core competences for the R8 e-tron technology platform: The body structure is based on Audi Aluminum Space Frame (ASF) technology.

Driving dynamics
The normal distribution of torque is clearly biased toward the rear axle and is similar to that of the production R8 mid-engine sports car, sending roughly 70 percent to the rear and 30 percent to the front. If an axle slips, this balance can be varied by means of the four centrally controlled electric motors. The electric vehicle from Audi thus enjoys all of the advantages of quattro technology.

The R8 e-tron also uses the four individual motors, which as wheel drives are connected directly to the respective wheel via a short shaft, to control the lateral dynamics. Similar to what the sport differential does in conventional quattro vehicles, they enable torque vectoring – the targeted acceleration of individual wheels – and thus active distribution of the torque. This improves driving dynamics while at the same time increasing driving safety. Understeer and oversteer can be corrected by not only targeted activation of the brakes, but also by precise increases in power lasting just a few milliseconds. The concept car remains extremely neutral even under great lateral acceleration and hustles through corners as if on the proverbial rails.

The chassis has triangular double wishbones at the front axle and a trapezoidal-link rear suspension made of forged aluminum components – a geometry that has proven in motorsports to be the optimal prerequisite for high agility, uncompromising precision and precisely defined self-steering behavior. A taut setup was chosen for the springs and shock absorbers, but still offers a high level of comfort.

Power supply
The energy storage unit is charged with household current (230 volts/16 amperes) via a cable and a plug. What used to be fuel cap covers the socket. With the battery fully discharged, charging time is between six and eight hours. High-voltage (400 volts, 63 amperes) reduces this to around 2.5 hours.

The battery isn’t only charged when the car is stationary, but also while driving. The keyword here is recuperation. This form of energy recovery is already available today in a number of Audi production models. During braking, the alternator converts the kinetic energy into electrical energy and feeds it into the onboard electrical system. This relieves the load on the alternator during the next acceleration phase, which enhances driving dynamics and improves efficiency.

Interior and control concept
The interior evokes motorsports ambience on a luxury level. As with the R8, its distinctive element is the monoposto: a large arc sweeping around the dashboard instruments. Unlike the R8 production model, however, the Audi R8 e-tron has a graphic display to indicate the driving mode. It is located between two dial instruments that indicate the recuperation and the boost level, respectively. Similar to the new A8, the driver of this high-performance sports car can select the various driving modes using a stalk that is based on shift-by-wire technology.

Audi at the Silvretta Classic
It goes without saying that Audi’s heritage department will also be participating in the traditional Silvretta Classic. Thomas Frank, Head of Audi Tradition, will be piloting one of the rare green Audi Sport quattro models. A grand total of 15 of these cars were painted “Malachite Green” between 1983 and 1985. What had long been the most expensive car that Audi had ever built is highly coveted by collectors and enthusiasts, and prices are rising steadily.

Another headturner in the automobile scene is the Audi Ur-quattro. Audi Tradition is entering a 1988 model with a very special team in the Silvretta Classic. Multi-time Mille Miglia-winner Luciano Viaro has relied on blind co-pilots in classic rallies for some time now. The Italian “M.I.T.E.” project (Miteinander, Insieme, Together, Ensemble) is a multilingual symbol for the integration of people with disabilities in classic racing. Blind persons are given the opportunity to participate actively in rallies as co-pilots, directing the driver using a roadbook in Braille. Audi Tradition has supported this project for the past year and is making its project debut at the Silvretta Classic in 2010.