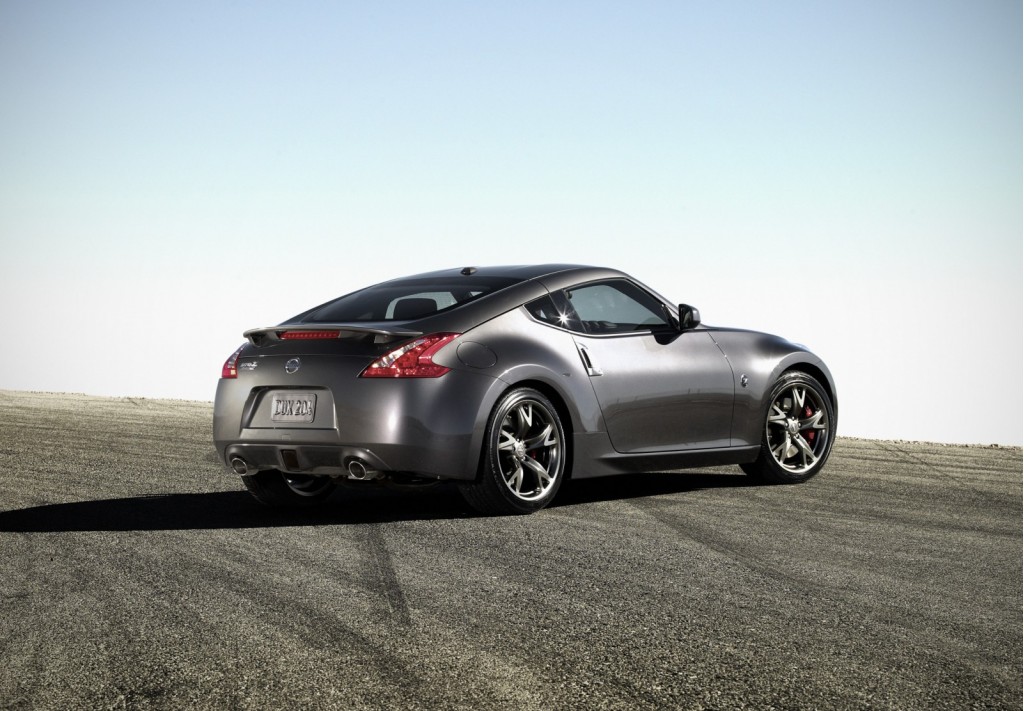 The 2010 Nissan 370Z sports coupe is less a car and more a rocket ship-like force of nature wrapped in a taut and sexy metallic wrapper. Just nail the throttle and the car takes off with enough force and gusto to pin you back in your seat as your ears are filled with the gloriously symphonic howl emanating from the engine bay. This is a driving experience that is on the endangered species list. The 2010 Nissan 370Z is a hardcore, unapologetic sports car. Just as God and Nature intended it to be.

If you were wondering, Syncro Rev-Match is a system that blips the throttle to mimic the effects of heel and toe downshifting. The result is crisp and smooth downshifts each and every time. Syncro Rev-Match also has the side bonus of encouraging the driver to use increased engine speed to slow the vehicle instead of relying so heavily on the brakes. No doubt this will mean any owner’s brake pads will last quite a bit longer if they downshift to slow the vehicle routinely.

The standard 3.7-liter V-6 engine that resides under the hood of the 370Z pumps out a galloping 350 horsepower and 276 pound-feet of torque. That’s plenty to get this 3,000-pound two-seater 0-60 in about 4.8 seconds thereby enabling it to smoke many a so-called muscle cars at the stoplights. What may also surprise and delight any owner is the fact that the 370 gets 18 miles per gallon city and 26 on the highway. During the test the Z returned a steady 22 miles per gallon.

On a test run across the winding Ortega Highway in Southern California the 2010 Nissan 370Z truly proved its handling mettle through the precarious curving S-turns and switchbacks. The upgraded brakes that come as part of the Z Sport Package also helped slow the Z when it happened upon hapless groups of dawdling middle-aged Harley Davidson riders out for a Sunday drive.

Driving the test Z through the streets of Lake Elsinore (home of restaurants with such fanciful names as The Outhouse and Menace) even the masses of scary looking Harley riders liked the looks of this Nissan sports coupe. Some even gave the vehicle a thumbs up all the while bearing ominously scary toothless grins.

Back on the twisting two lane highway the Z’s steering proved smooth and gave plenty of feel without feeling fidgety around tight, winding corners. This is a car that can make even a novice driver feel like he or she belongs in Formula 1 racing. The 2010 Nissan 370Z truly flatters its driver at all times with the depth and breadth of its awesome arsenal of skills.

The interior of the 370Z feels solidly built yet has plenty of room for six-footers (a rarity among sports coupes). All the controls, dials and knobs are angled towards the driver (rightfully so as this is a “driver’s car”) but the passenger seat is comfortable and offers plenty of head and legroom.

The Z offers 6.9 cubic feet of cargo space and while that may not seem like much there is plenty of room for a weekend trip away or for a week’s worth of groceries. There are plenty of cubbies, side pockets and covered storage boxes to hide iPods, cell phones, wallets, and any other junk you may feel the need to bring with you.

While the 2010 370Z may not be cut out for family duty it is the perfect weekend getaway rocket for a couple of overworked parents who need some time away from the kids. Heck, one of those parents could also easily use the Z as their daily commuter as the clutch and shifter are light enough even for heavy traffic. However you rationalize the purchase of a 2010 370Z just be sure to do it soon. Because you never know when cars this fun to drive are finally going to be made illegal.