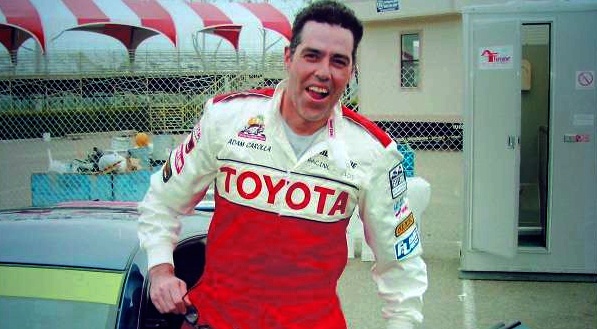 Scandal rocked CelebsAndCars today -- and by "scandal", we mean a total non-scandal that we completely turned into a fake scandal while we were goofing off in the break room, hopped up on double lattes and day-old cinnamon scones. This is how we amuse ourselves on slow news days.

Naysayers point to the fact that at 45, Carolla is two years older than the Corolla itself. Also, his name is spelled  differently. And also, even if you were weird enough to name someone after a car, you'd probably change their first name, not their last. On the other side of the fence, conspiracy theorists insist that Carolla's birth certificate is a forgery, and that he was really born in Tokyo six months, six days, and six hours after the Corolla. ¡Ay, dios mio!

It gets better: deniers point to the fact that Carolla will not be driving a Corolla during the Grand Prix, but rather a Scion tC. Then, in a shocking revelation, we learned that Scion is totally MADE BY TOYOTA. We don't know who to believe anymore!

And that, ladies and gentlemen, is how we amuse ourselves on Monday afternoons. Now we're going to hit TGIFridays for a few pitchers of margaritas until someone sends us some good celebrity nudes and we can get back to the business of journalism.