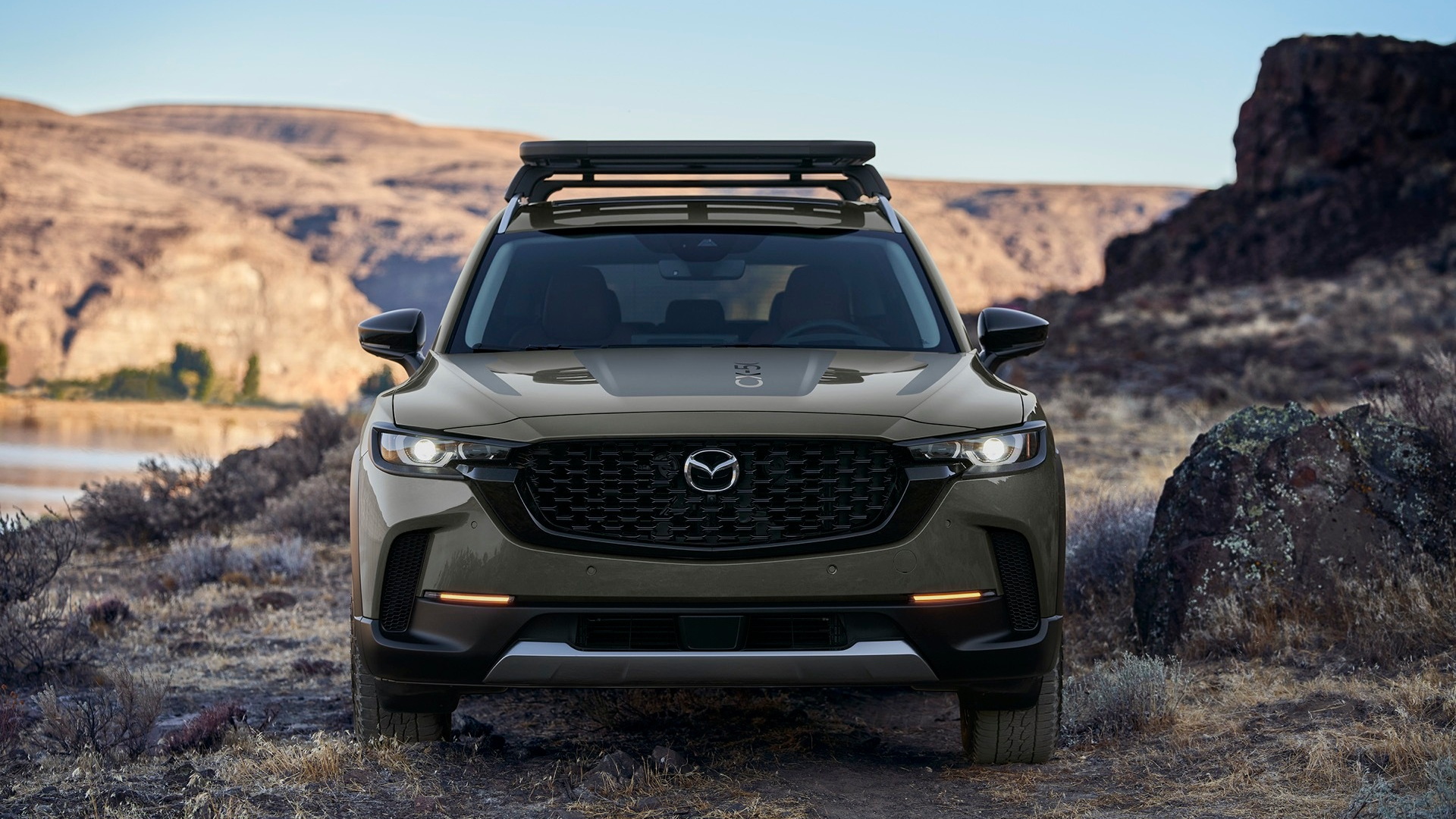 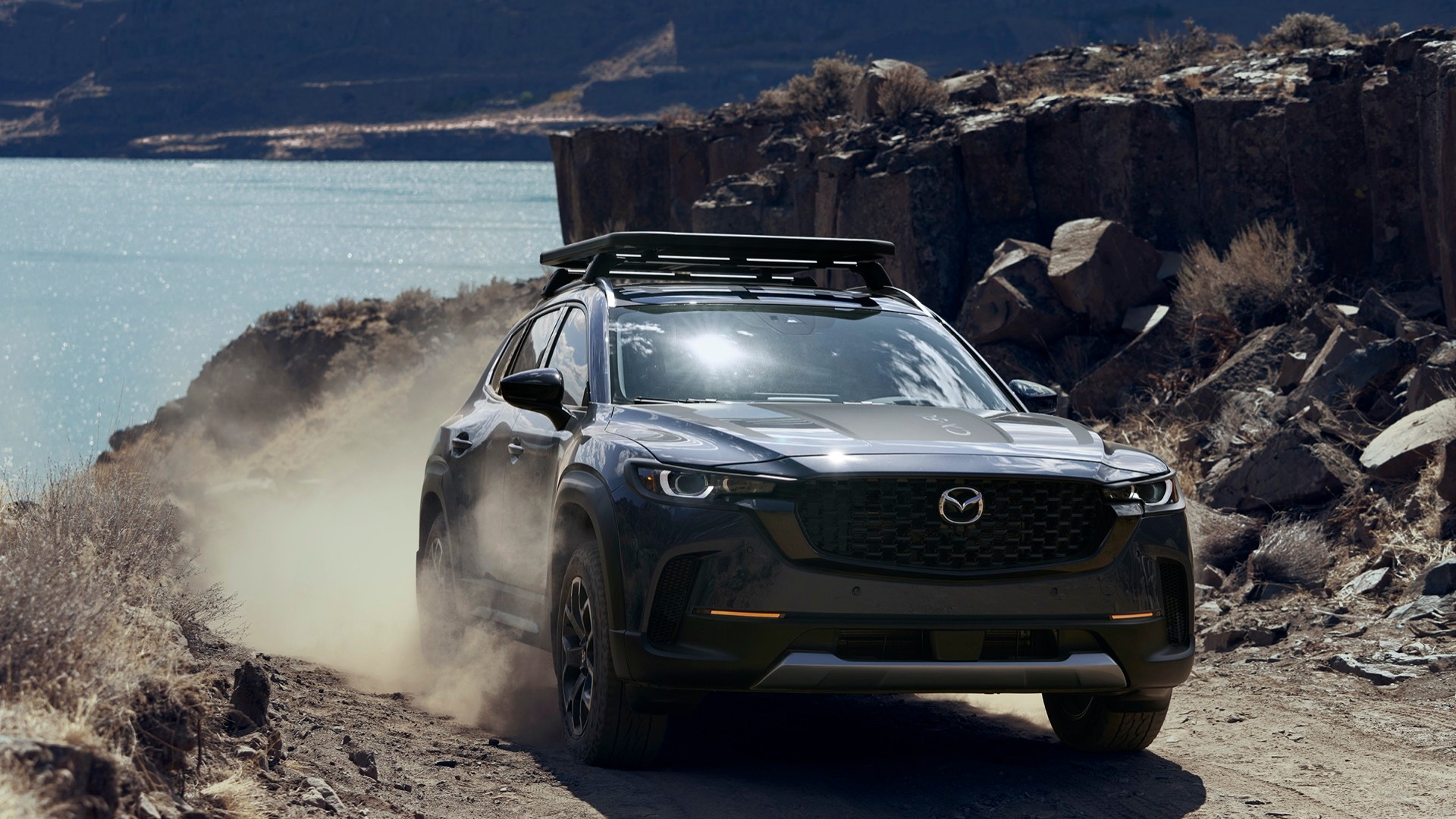 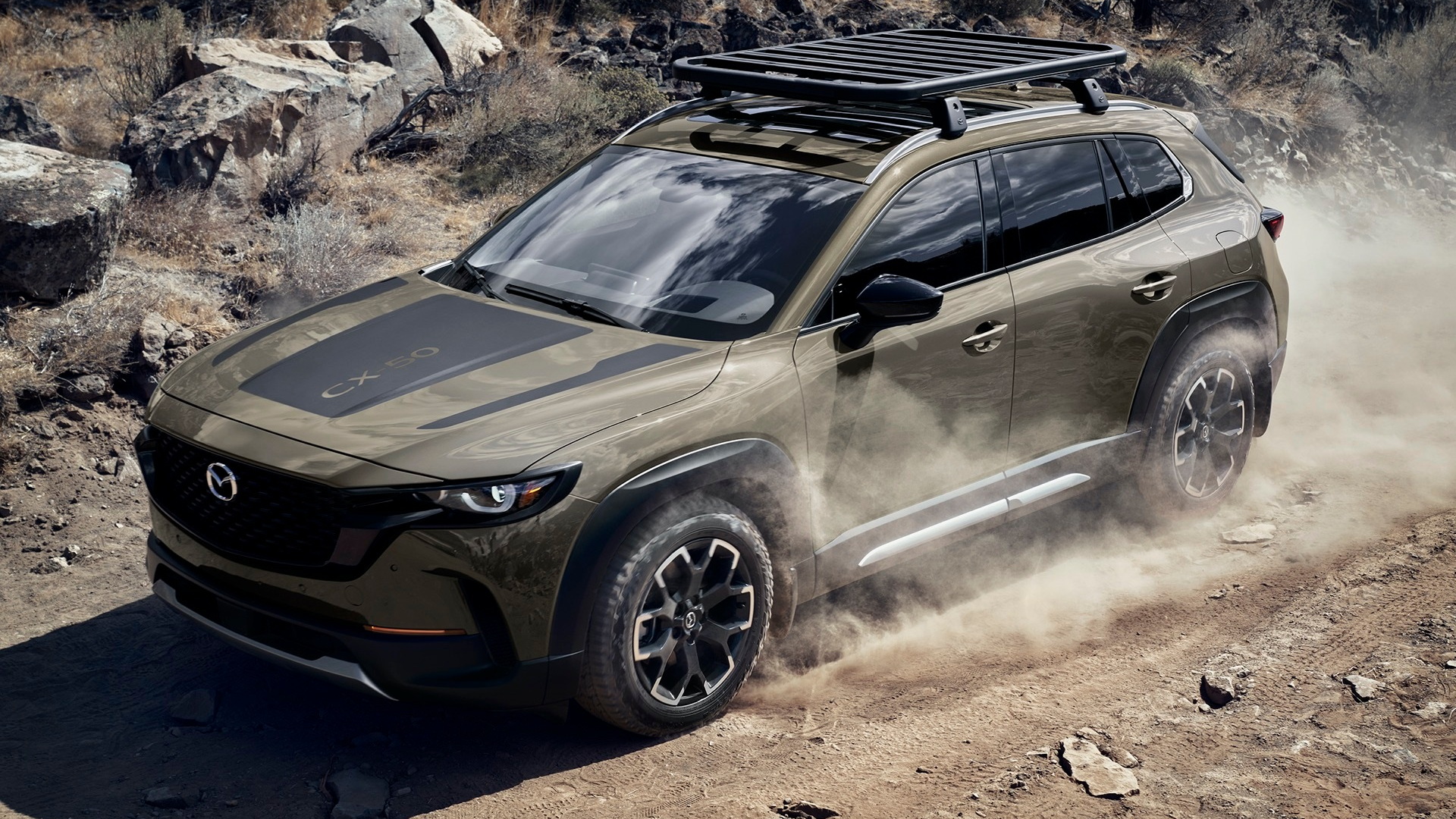 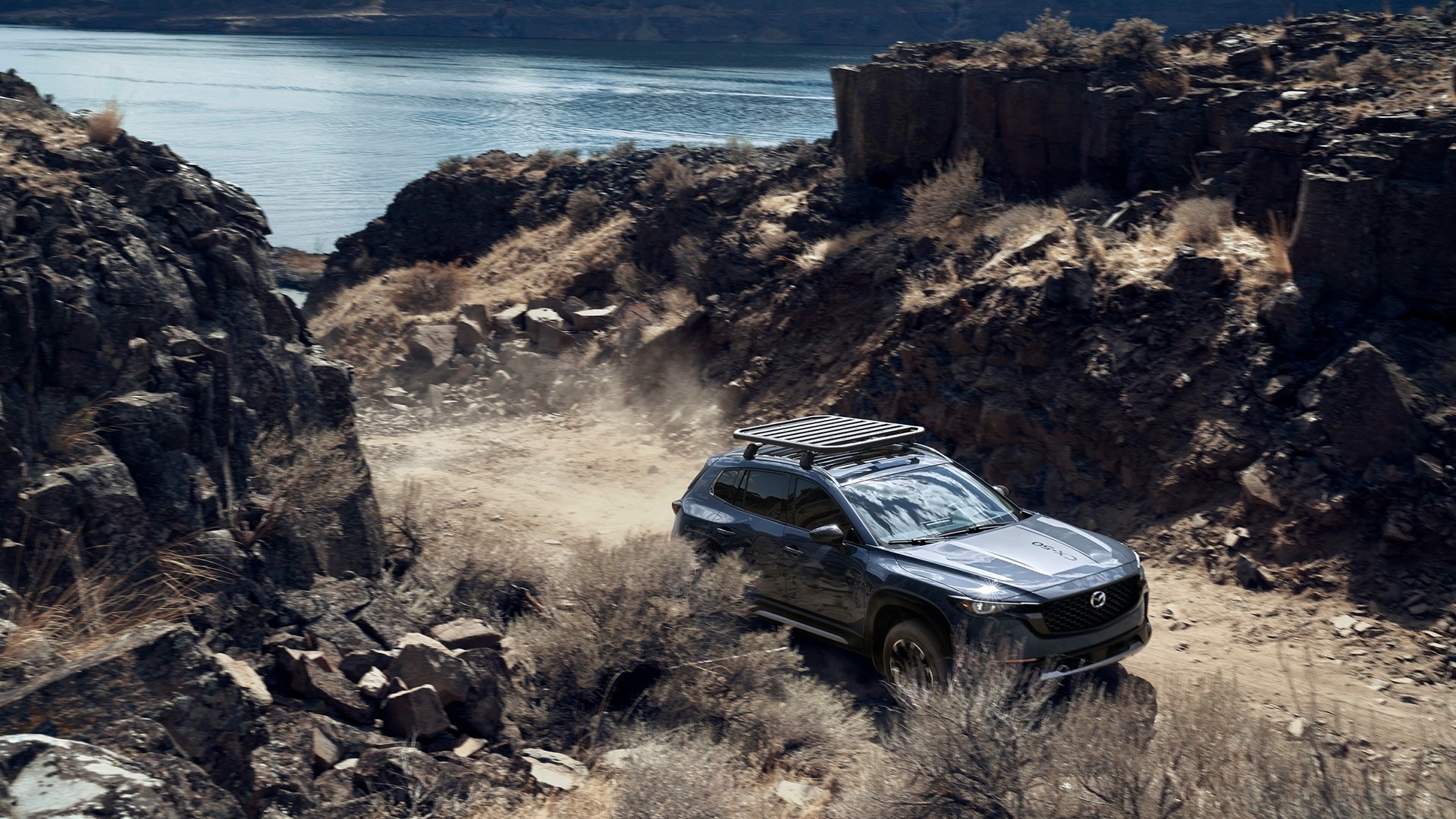 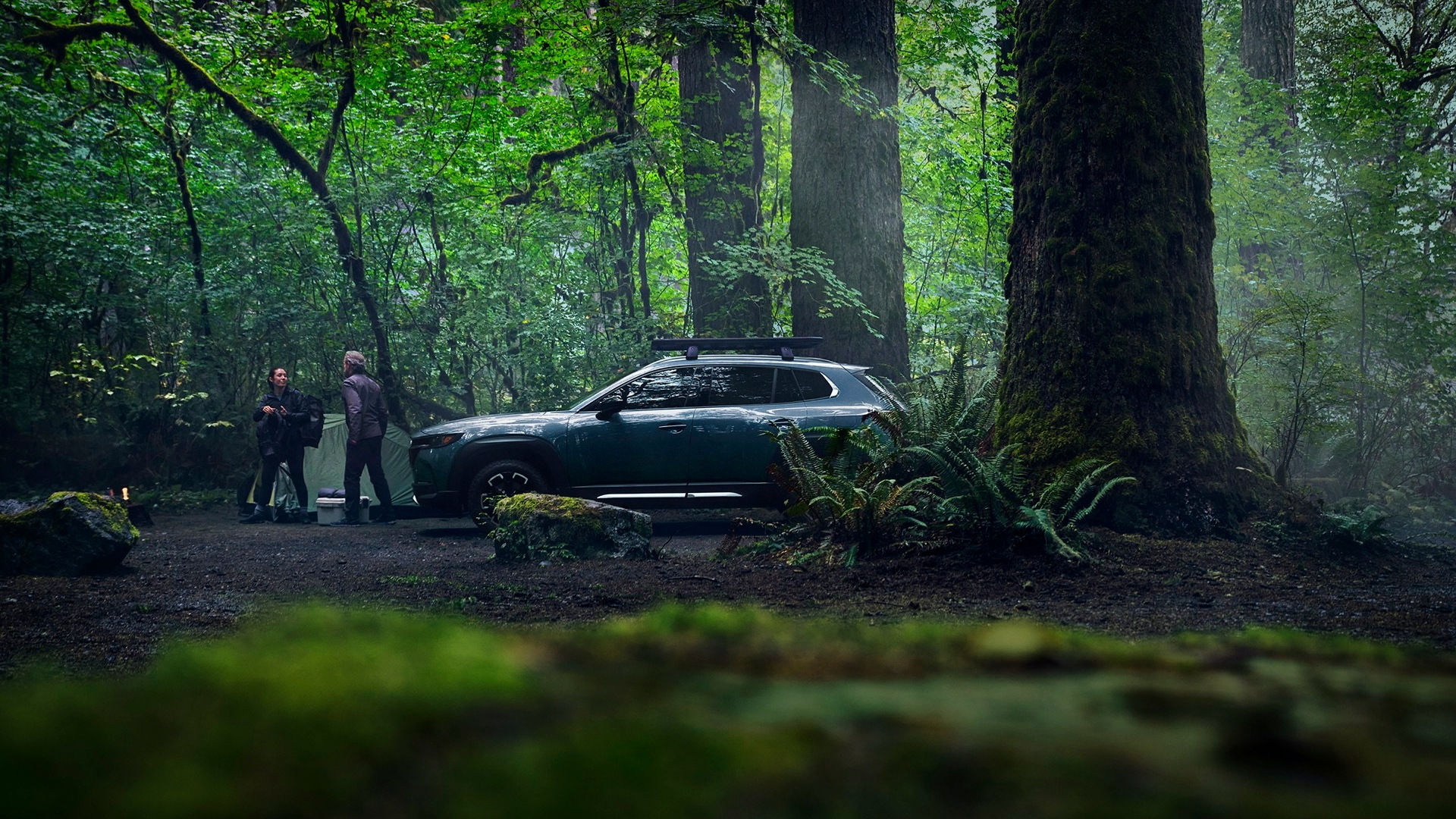 Mazda late on Monday provided a first look at the 2023 CX-50, a compact crossover the automaker said is aimed at outdoor enthusiasts and other lifestyle-oriented buyers.

Mazda is holding back detailed specifications until closer to the market launch next spring, but we know the CX-50 will come with standard all-wheel drive and initially be offered with the choice of a 2.5-liter inline-4 or 2.5-liter turbocharged inline-4. In each case a 6-speed automatic will be standard.

These engines are found in other Mazda vehicles where they rate in at 187 hp and 250 hp, respectively. Mazda said electrified powertrains are planned for the CX-50 at a later date, including a conventional hybrid.

The CX-50 will also come standard with a drive mode selector known as Mazda Intelligent Drive Select, or Mi-Drive. This system provides the vehicle with specific settings for handling a variety of conditions, including off-road terrain and towing, according to Mazda.

Further alluding to the lifestyle nature of the CX-50, Mazda has added underbody protection similar to what you find on off-road vehicles.

The outdoorsy theme continues inside where trim choices have been inspired by the technical material found on outdoor gear. A panoramic moonroof, a first for Mazda, will also be available on the CX-50.

Contrary to previous reports, the CX-50 doesn't ride on Mazda's recently announced Skyactiv Multi-Solution Scalable Architecture capable of supporting inline-6 engines and rear-wheel drive. Rather, it shares a platform with the existing CX-30 and MX-30 compact crossovers, though the CX-50 is closer in size to the larger CX-5. Fans of the CX-5 shouldn't worry as this model will stick around for buyers looking for a more urban-style runabout.

Pricing hasn't been announced but will likely start higher than the $27,945 starting price of the CX-5 with all-wheel drive.

Mazda has confirmed that the CX-50 is the model that will be built at the newly constructed plant in Huntsville, Alabama, which is shared with Toyota. It's where Toyota is already building the Corolla Cross. Production of the CX-50 is scheduled to start in January. The plant has the capacity to build 300,000 vehicles annually.

According to Roadshow, larger CX-70 and CX-90 crossovers powered by inline-6 engines and based on Mazda's new Skyactiv platform mentioned above will follow. The CX-70 is expected to serve as a spiritual successor to the former CX-7 while the CX-90 is expected to directly replace the current CX-9. Plug-in hybrid technology is expected to be available in both new crossovers.

The first vehicle based on the new platform is due in 2022, though its identity is unclear. One possibility could be a replacement for the Mazda 6.