Rivian plans to launch a nationwide charging network for its R1T electric pickup truck and R1S electric SUV, but the electric car startup is taking a different approach than Tesla and its Supercharger network. Instead of highway rest stops and shopping centers, the Rivian Adventure Network will cluster around mountains and other recreational areas.

The network will include 3,500 DC fast-charging stations at more than 600 sites by the end of 2023, according to Rivian's website. With charging rates of 200 kw (to be upgraded to 300 kw+ at a later date), they'll be able to add 140 miles of range to an R1T or R1S in 20 minutes, and will be powered by 100% renewable energy, Rivian said. They'll also offer automatic charging, allowing drivers to simply park and plug in, the company said.

These stations, which will be exclusive to Rivian owners, will be located on highways and main roads, often near cafes and shops, the company said. However, they'll be located within striking distance of outdoor destinations, the kinds of places Rivian envisions owners taking their vehicles.

In addition to the Adventure Network fast-charging stations, Rivian plans to install more than 10,000 of what it calls Waypoints by 2023. These are 240-volt Level 2 AC charging stations, equivalent to what Tesla calls Destination Chargers. They'll offer 11.5 kw of charging power, and will be capable of adding up to 25 miles of range per hour, according to Rivian. Located at shops, restaurants, hotels, and parks, these charging stations will be open to all EV drivers, but Rivian owners will still get automatic charging that just requires plugging in. 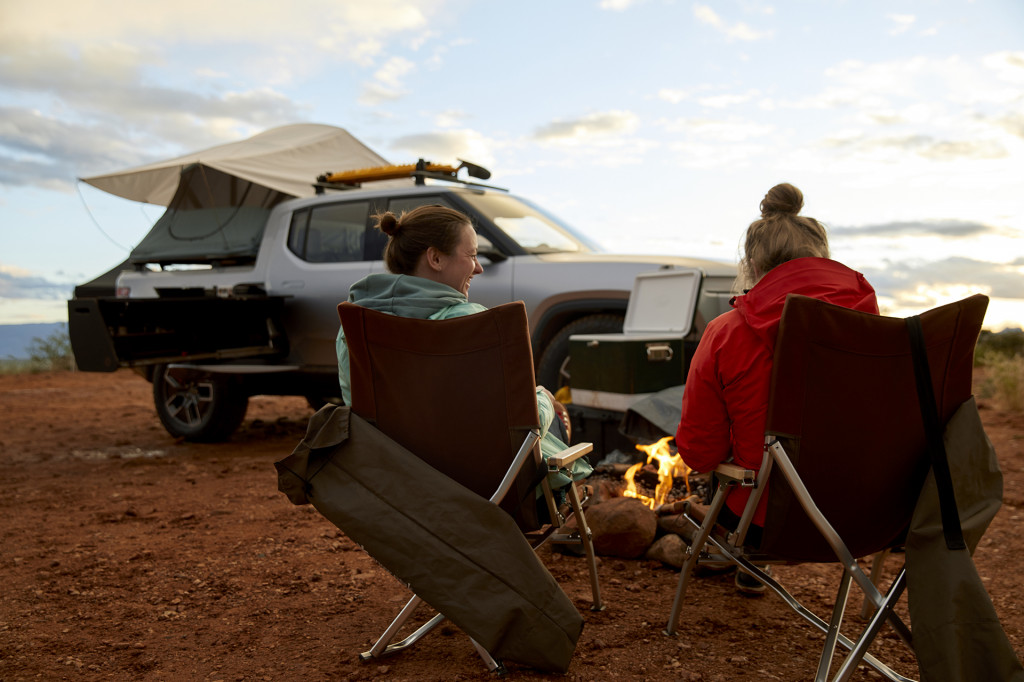 The first Rivian Waypoint locations will be at all 42 Colorado state parks, which will get two charging stations each thanks to a partnership between Rivian and the Colorado Parks and Wildlife Commission. Installation begins in July.

Rivian, like most other automakers, also plans to offer a branded home charging station. The Rivian Wall Charger will have the same 11.5 kw and 25 miles of range per hour as the public Waypoint stations, but it will require a 60-amp circuit for peak charging rates.

Rivian plans to begin customer deliveries this summer, starting with the R1T in June, and continuing with the R1S in August. Both vehicles will be built at a former Mitsubishi factory in Normal, Illinois.

The two vehicles are based on a common skateboard platform, with standard dual-motor all-wheel drive and three available battery packs. Both will launch with what Rivian calls the "Large Pack," allowing more than 300 miles of range, but an even larger pack will be available after launch, affording a 400-mile range. The R1S will have seating for seven, while the R1T will have an 11,000-pound towing capacity, the company has said.