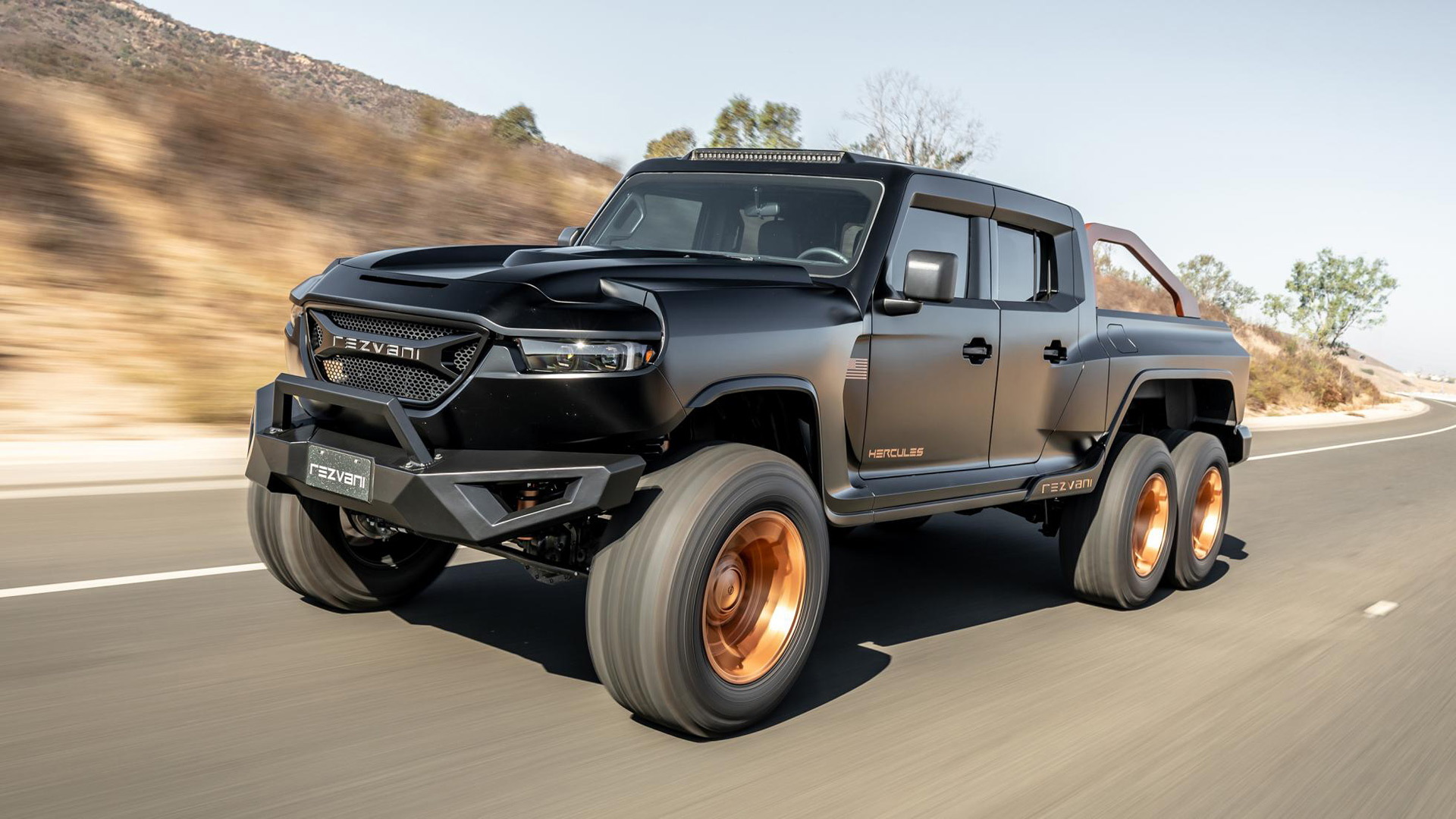 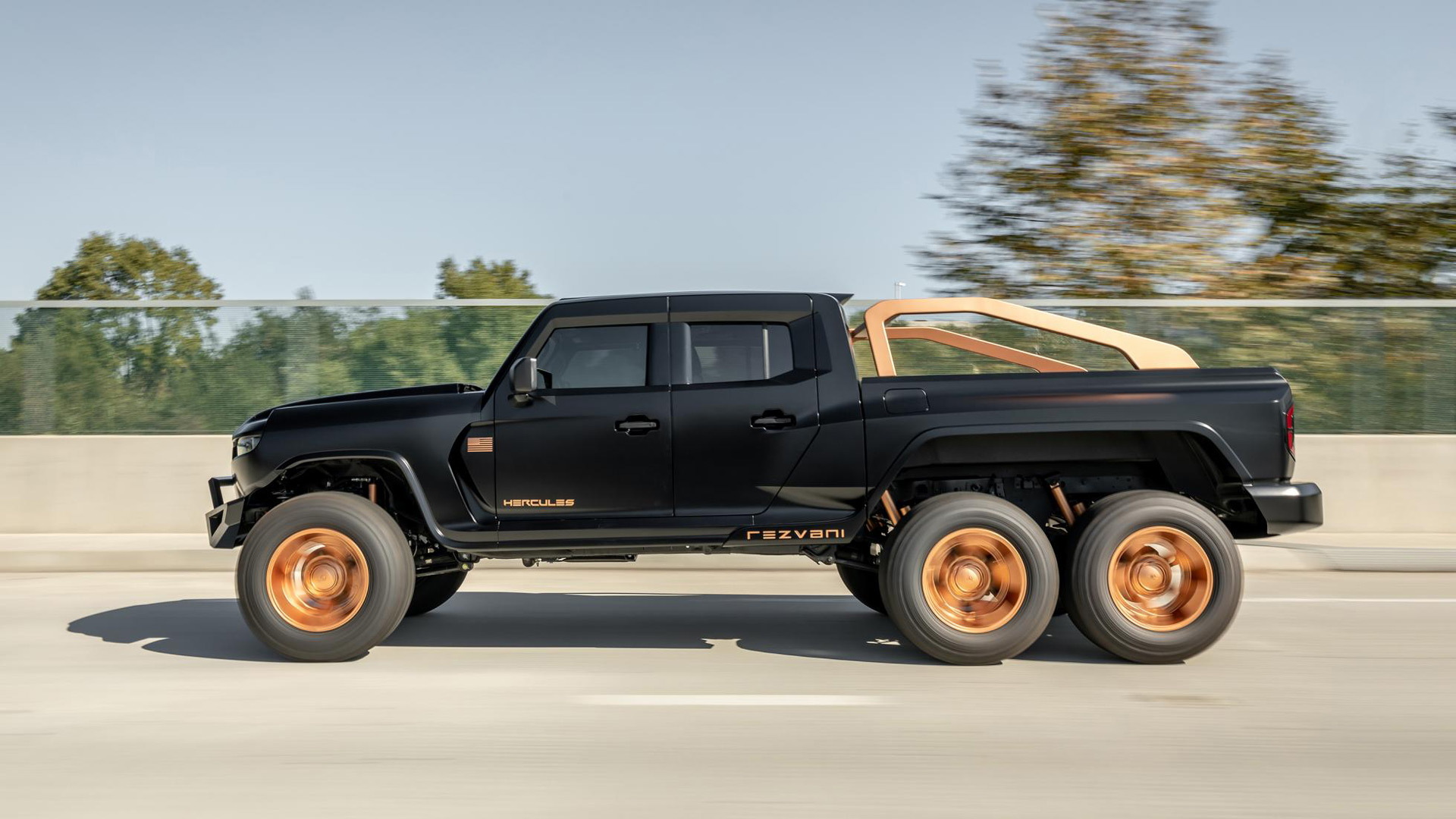 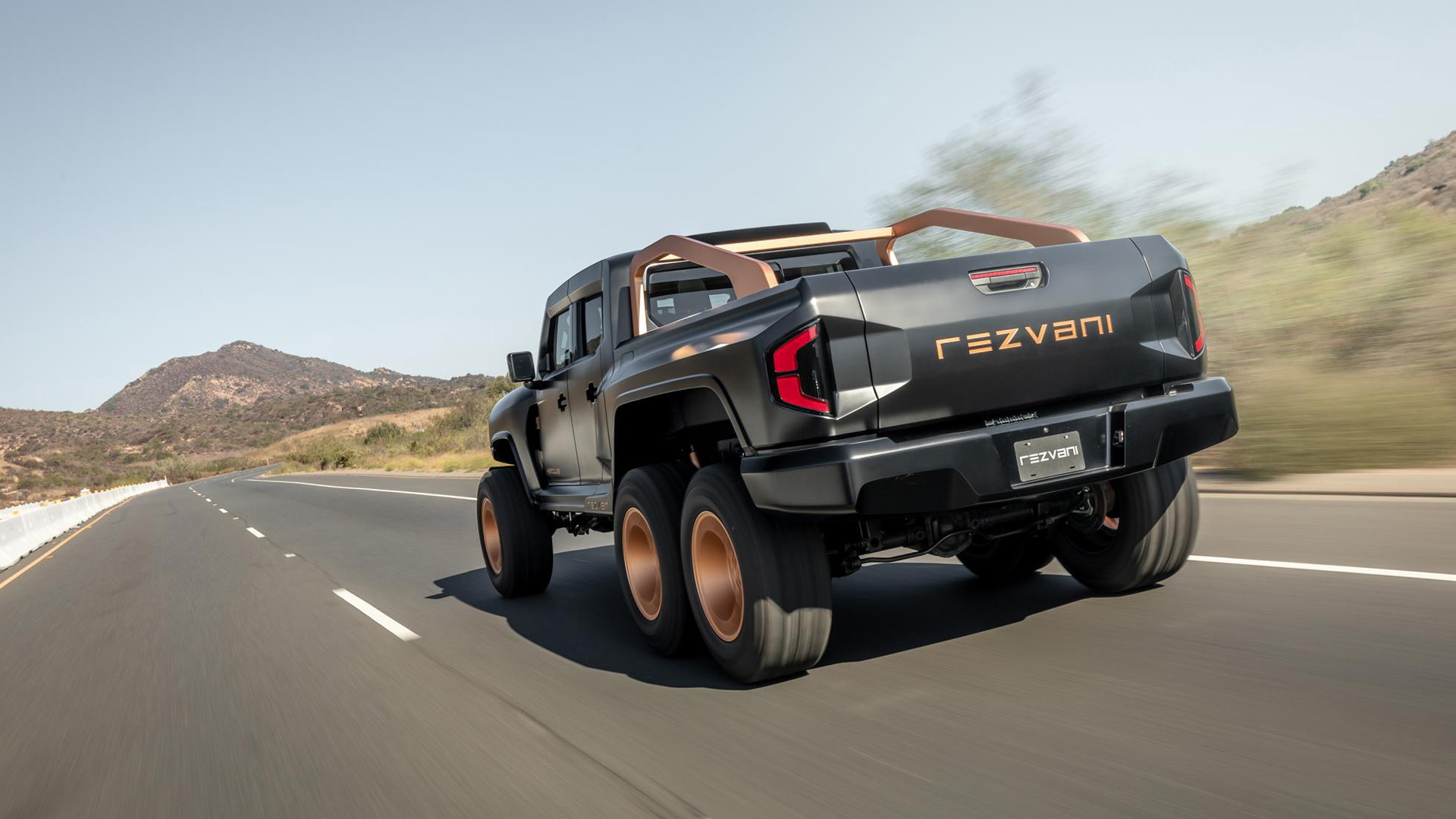 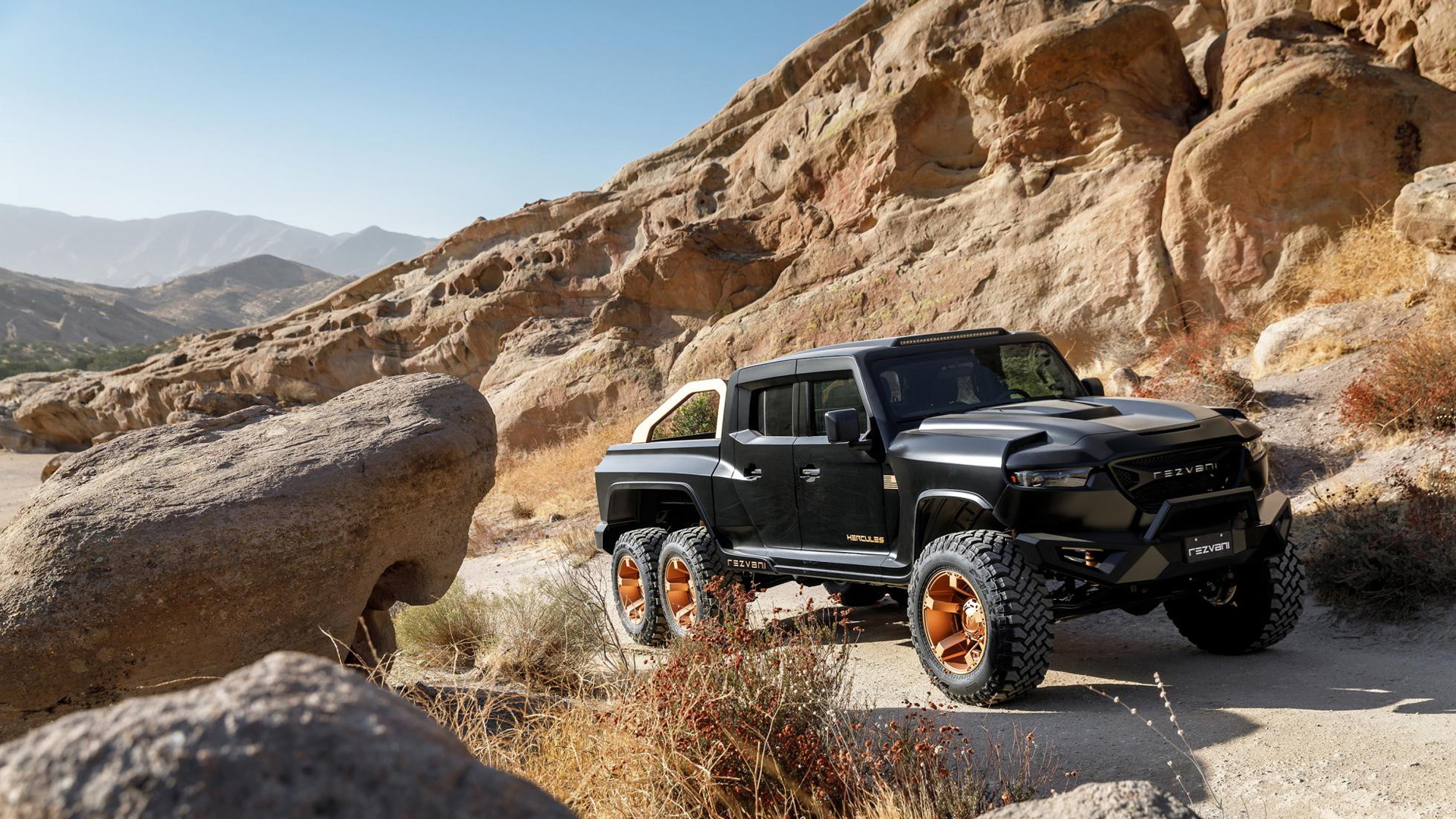 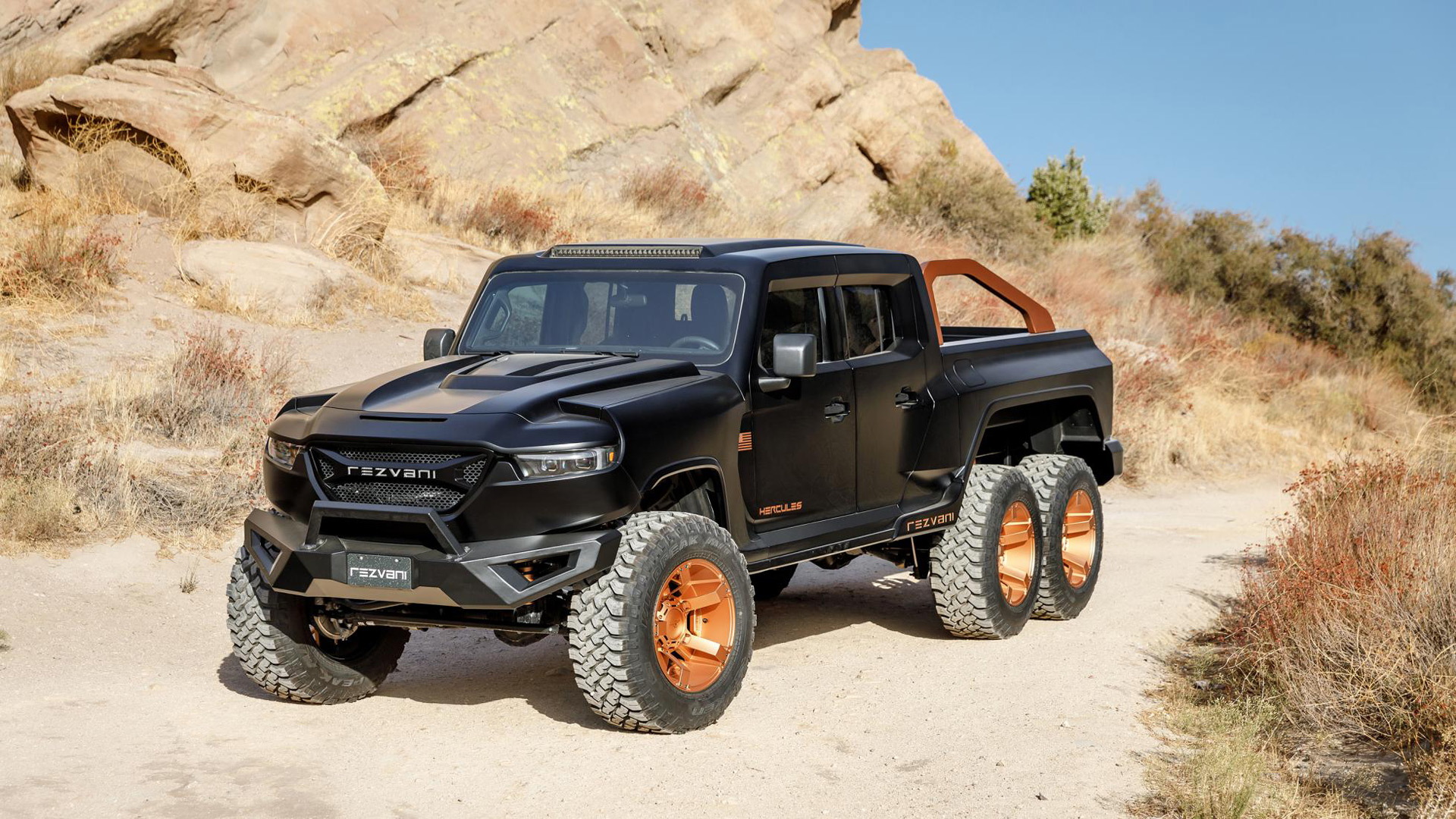 Rezvani is a California coachbuilder that over the years has built up a reputation for launching wild sports cars and SUVs.

But wild doesn't even begin to encapsulate all that the company's latest vehicle has to offer. Behold the Hercules 6x6, a six-wheeled, off-road-focused pickup truck that can be ordered with a 1,300-horsepower V-8.

The Hercules starts out life as a humble Jeep Wrangler, just like the Rezvani Tank SUV launched in 2017. However, the Hercules has been even more extensively modified, to point where the donor vehicle's roots are no longer recognizable. The total length, for instance, is 20.3 feet.

If money is truly no object, an additional $249,000 will get you a tuned version of the supercharged V-8 that went into the Dodge Challenger SRT Demon. Rezvani bumps up the displacement from 6.2 to 7.0 liters and adds a host of other mods to generate a hypercar-rivaling 1,300 hp. This option also gets you the reinforced 8-speed automatic out of the Ram 1500 TRX.

There are also two off-road packs to choose from, which include the brilliant Fox 3.0 internal bypass shocks we first saw on the 2019 Ford F-150 Raptor. There are also massive brakes with eight-piston calipers and 16-inch rotors, as well as an exterior light package that can make your surroundings at night as bright as day.

For those who need it, or simply want it, Rezvani also offers an armored version known as the Hercules 6x6 Military. In addition to the usual protective elements such as bullet-proof glass and body panels, and military-grade runflat tires, Rezvani also fits the vehicle with underbody explosives protection, blinding lights, a smokescreen, and electric shock door handles. There's also a device to protect the vehicle's electronics from an EMP attack. For this version, pricing starts at $325,000.

Mercedes-AMG in 2013 started the modern 6x6 craze when it rolled out a six-wheeled version of the previous-generation G63. We've since seen a number of tuning firms roll out their own six-wheeled monsters, including the likes of Hennessey Performance Engineering and Kahn Design. We think the version from Rezvani is the most extreme yet.