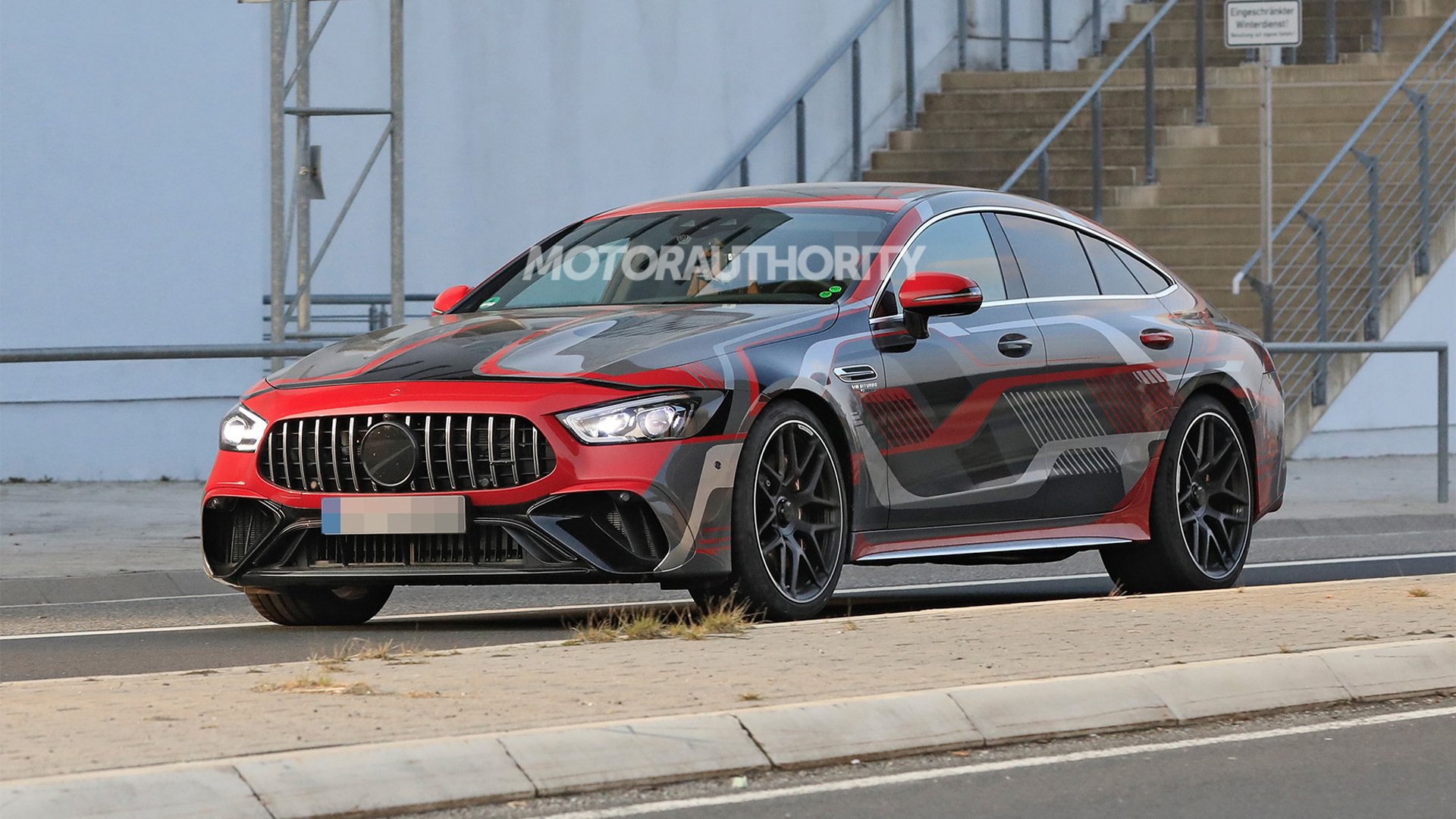 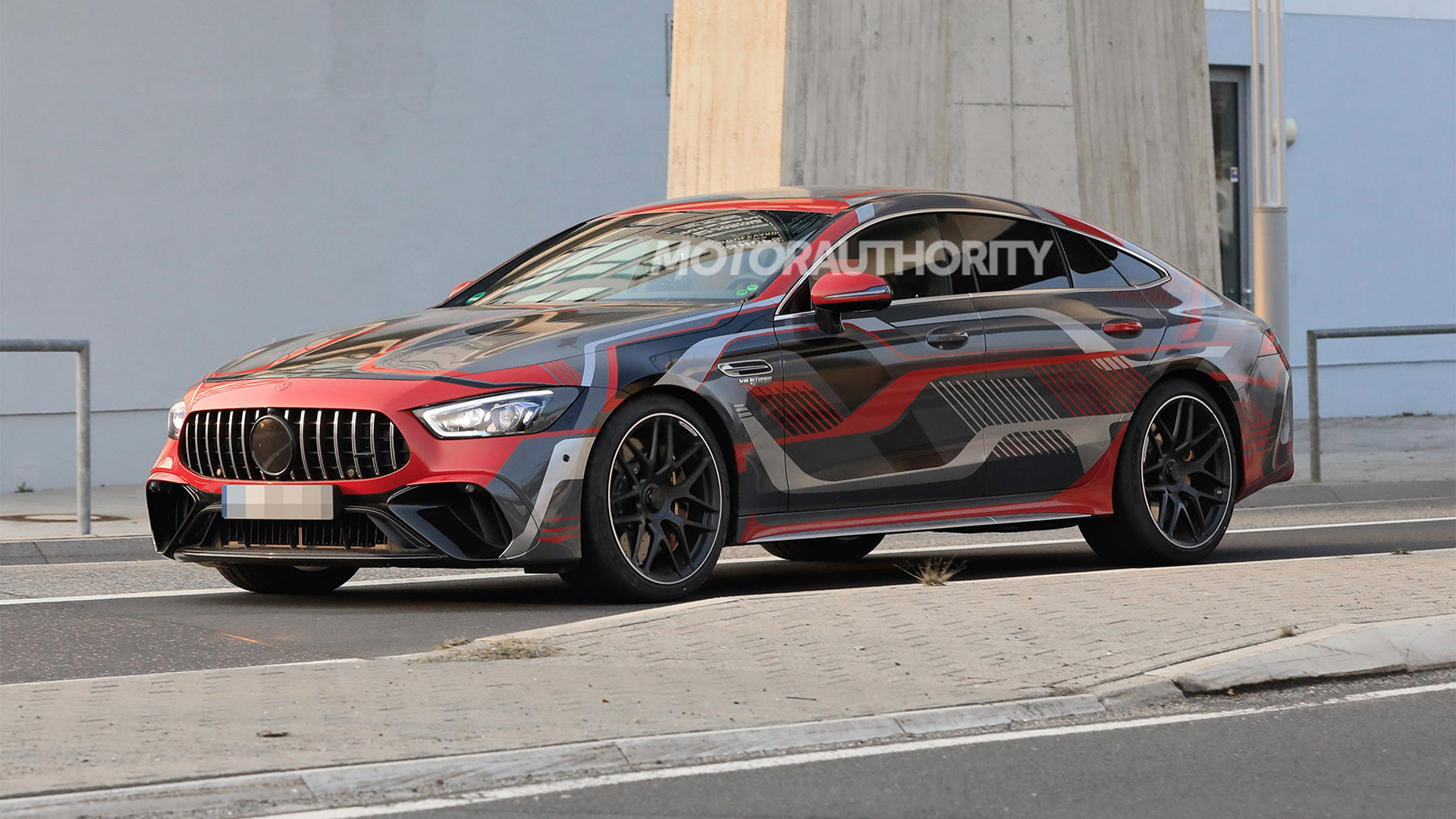 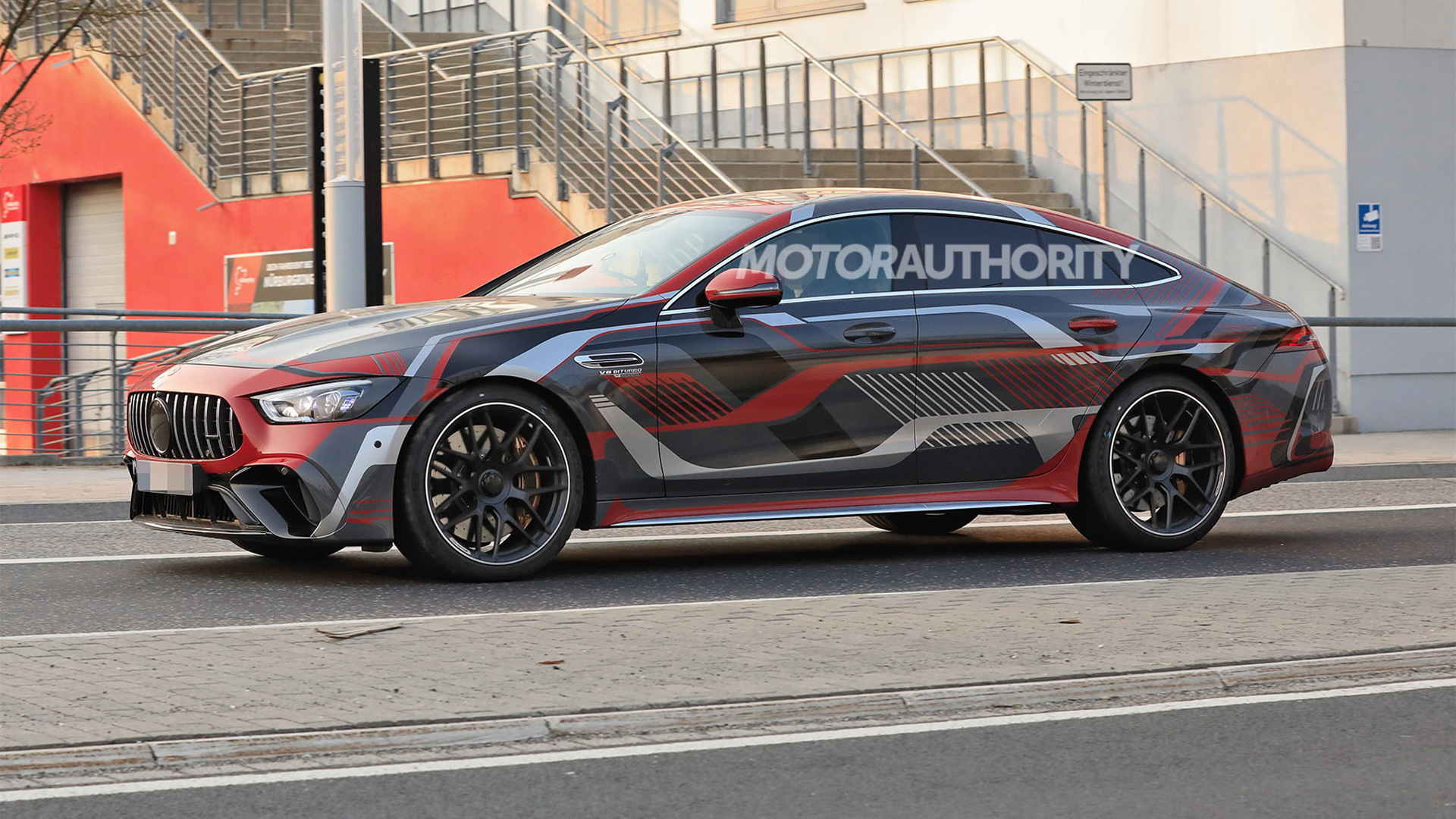 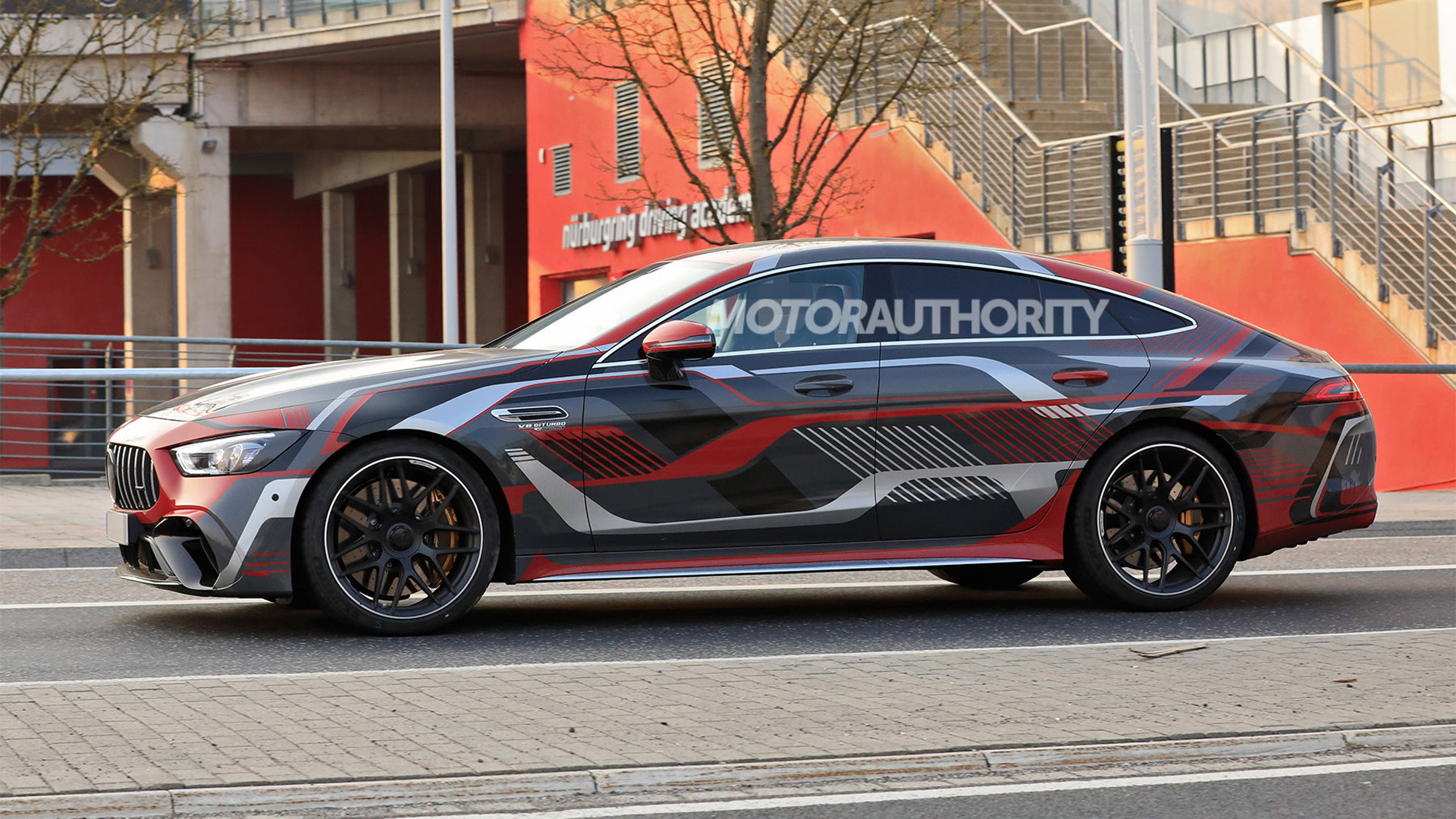 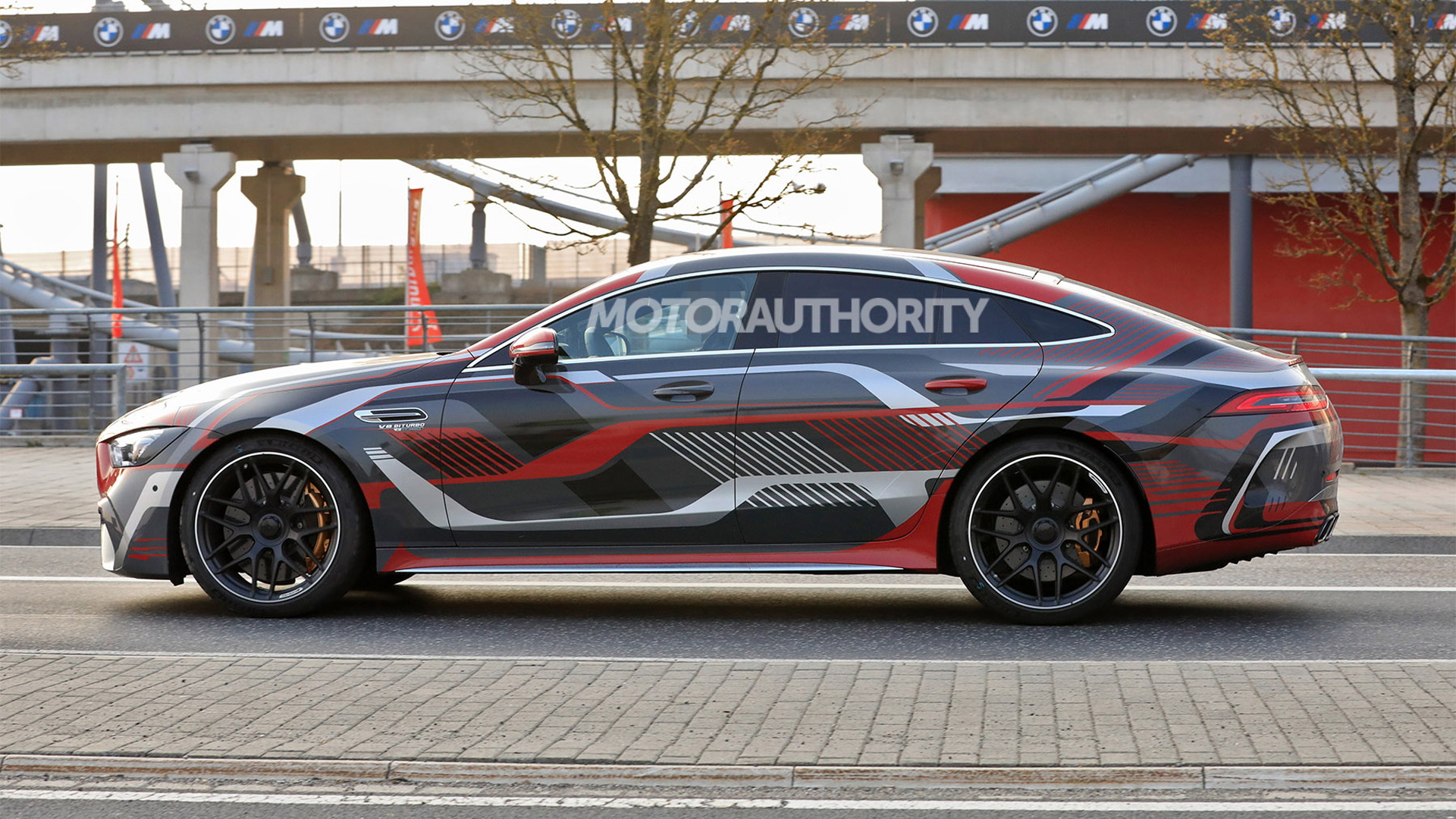 Our spy shots and video show a prototype of the AMG super hatch with a concealed flap on its rear fascia, located just below the taillight on the right. On the corresponding rear fender is the regular filler cap.

When the Mercedes-Benz AMG GT Concept bowed in 2017 as a preview of the GT 4-Door Coupe, the striking show car packed a powerful electrified V-8 under the hood. So far such a powertrain hasn't taken shape but that is now about to change. In fact, AMG has already revealed it. It will debut in this new GT 4-Door Coupe variant later this year.

The electrified hatch will be positioned as the range-topper in the GT 4-Door Coupe lineup, similar to how Porsche's Panamera and Cayenne also feature plug-in hybrids as their top option. Expect the AMG to be called something along the lines of GT 73e, the small "e" representing AMG's new E Performance branding for electrified cars.

The powertrain, which replaces AMG's former V-12 line, is confirmed to feature a 4.0-liter twin-turbocharged V-8 mated to a 9-speed automatic up front and a single electric motor mated to a 2-speed transmission at the rear. There will also be a 6.1-kilowatt-hour battery kept charged to provide power during high-performance driving, rather than pure electric range although an electric mode will be possible. Drive will be to all four wheels via a conventional all-wheel-drive system.

The exact output hasn't been confirmed but we know it will be at a minimum 804 hp, with the electric motor making 94 hp on a constant basis and up to 201 hp during high-load situations. Currently, the GT 4-Door Coupe range tops out with the GT 63 S, whose output is 630 hp. With over 800 horses, expect the super hatch to sprint to 60 mph in less than 3.0 seconds. The GT 63 S does it in 3.2 seconds.

The plug-in hybrid system will eventually filter across to other high-end models in the AMG lineup. AMG's version of the new S-Class is likely the next recipient.

Eager buyers should expect a premium price for the extra performance the powertrain brings. The GT 63 S already starts at $159,995. For this kind of money, buyers could also opt for the Porsche Panamera Turbo S E-Hybrid or the battery-electric Porsche Taycan Turbo S and new Tesla Model S Plaid+.

AMG doesn't have an answer to the Taycan or Model S Plaid+ just yet, but its first dedicated electric vehicle is coming this year. It will be based on the recently revealed Mercedes EQS.