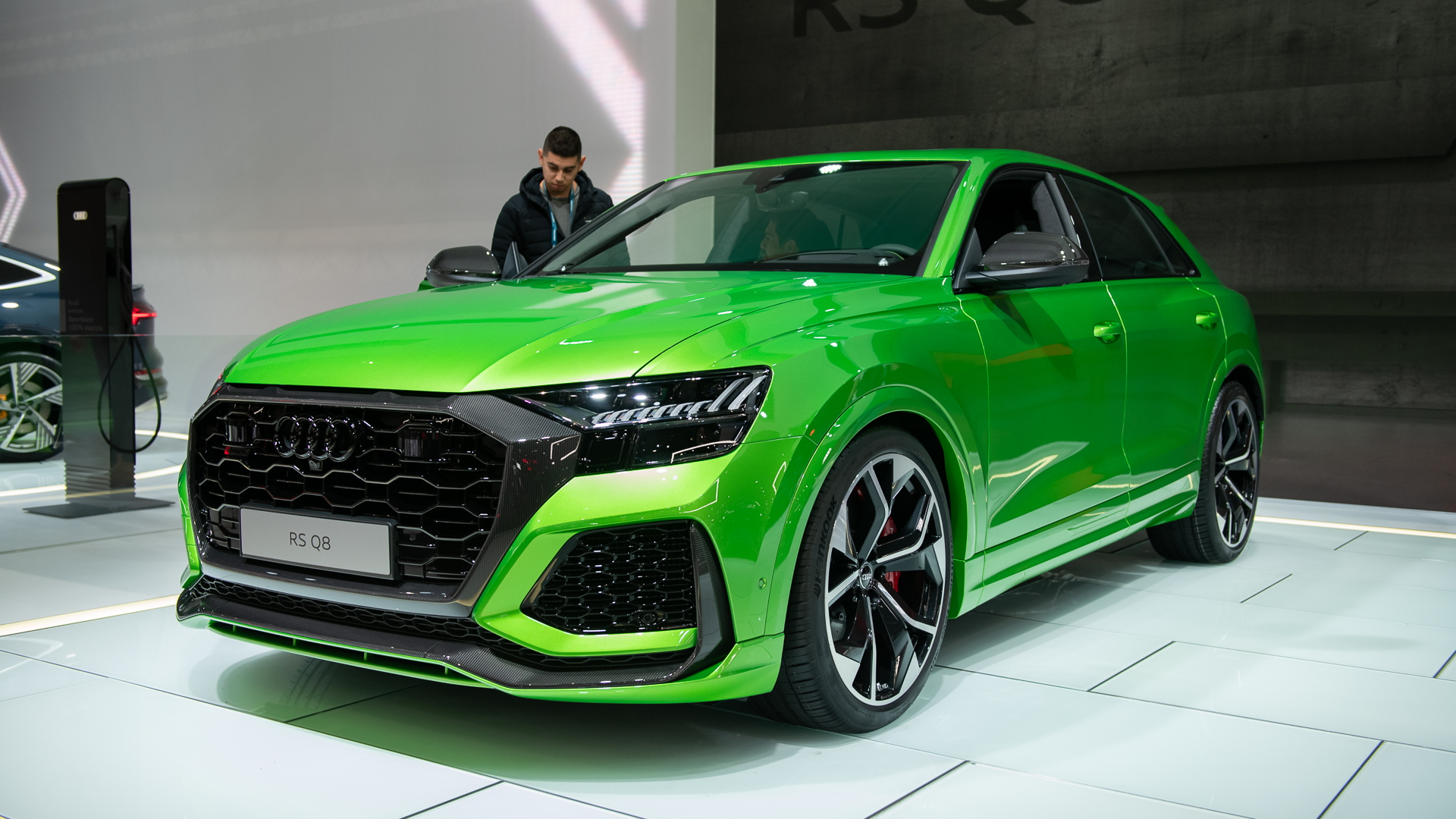 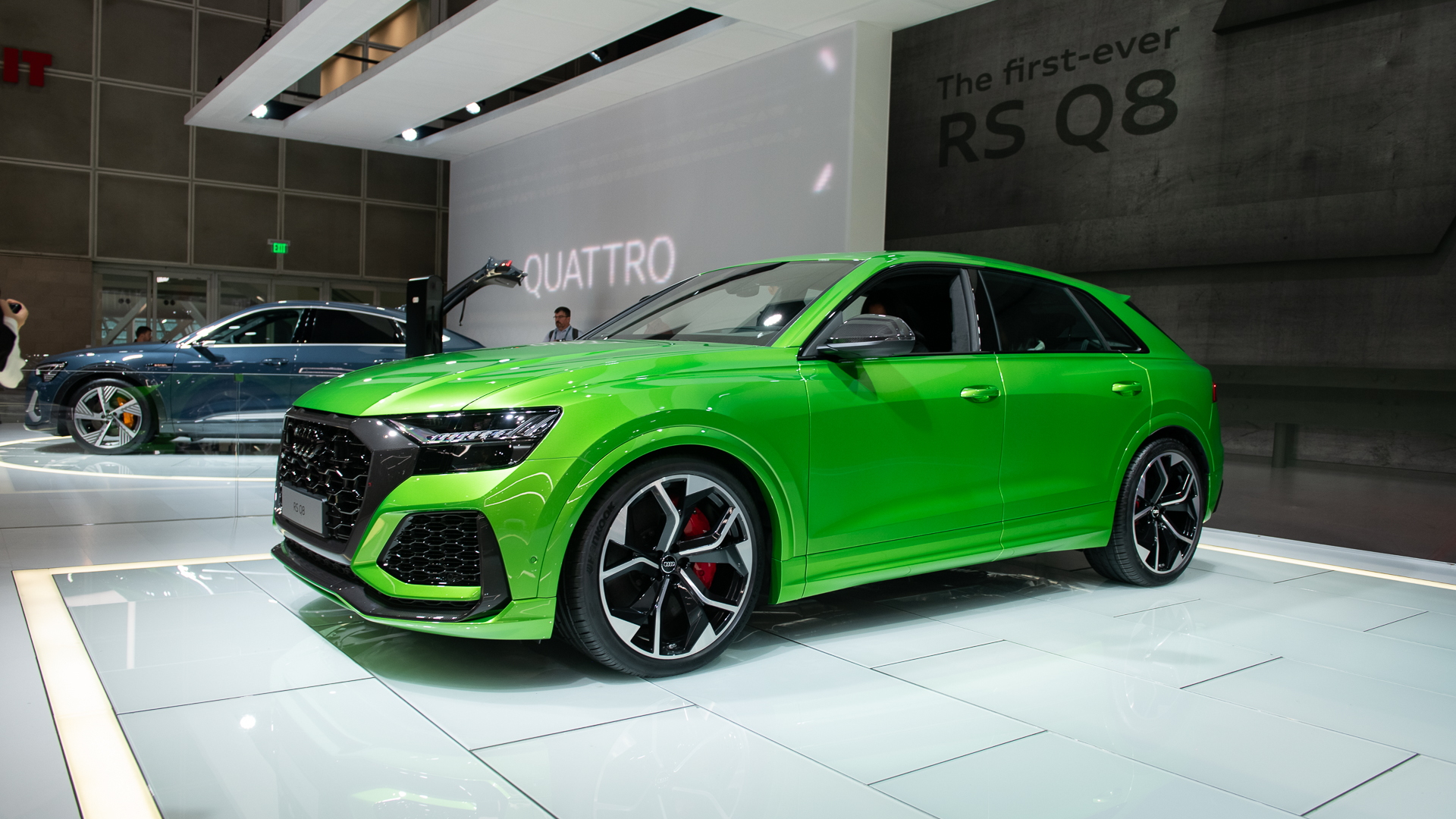 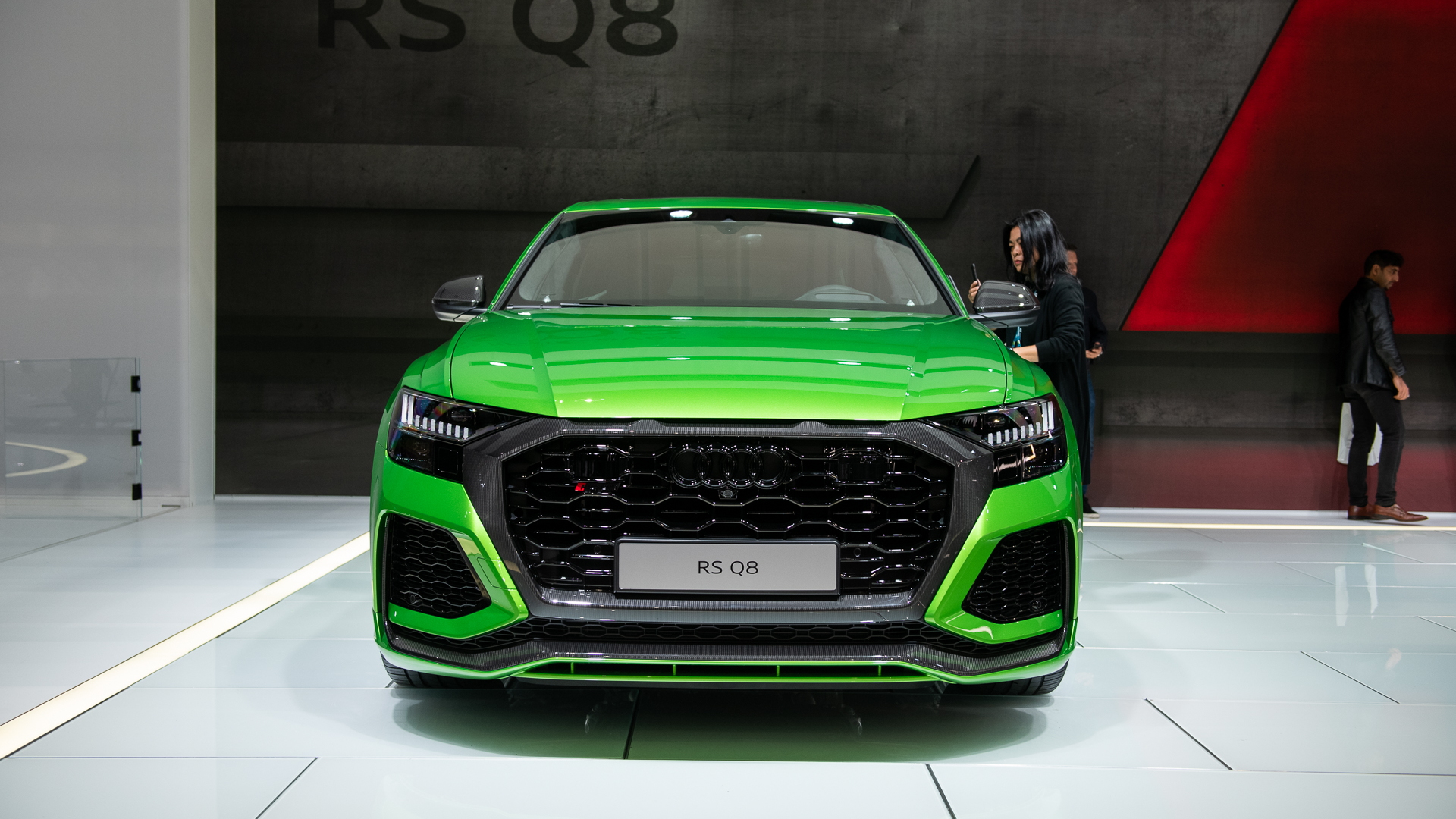 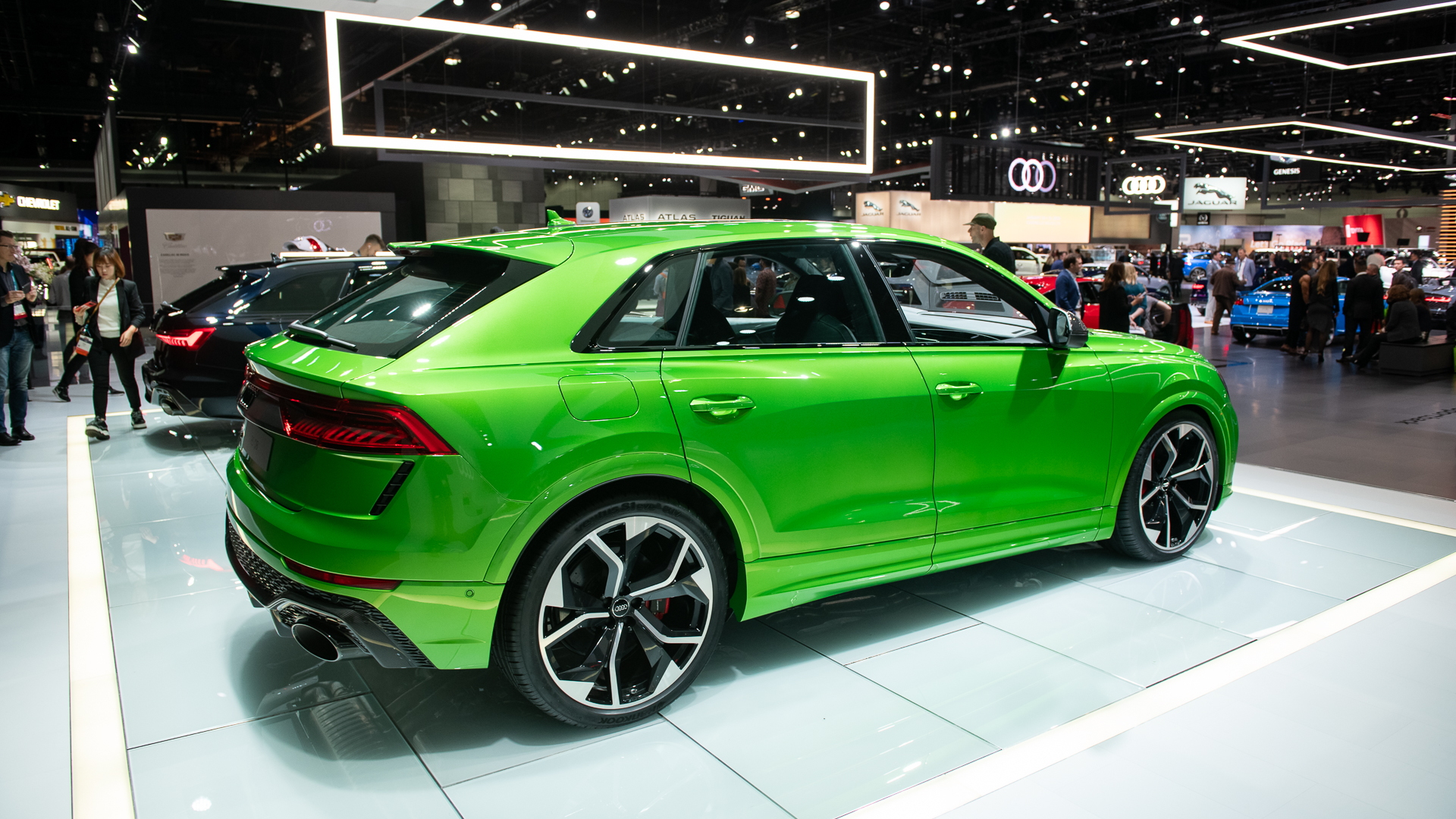 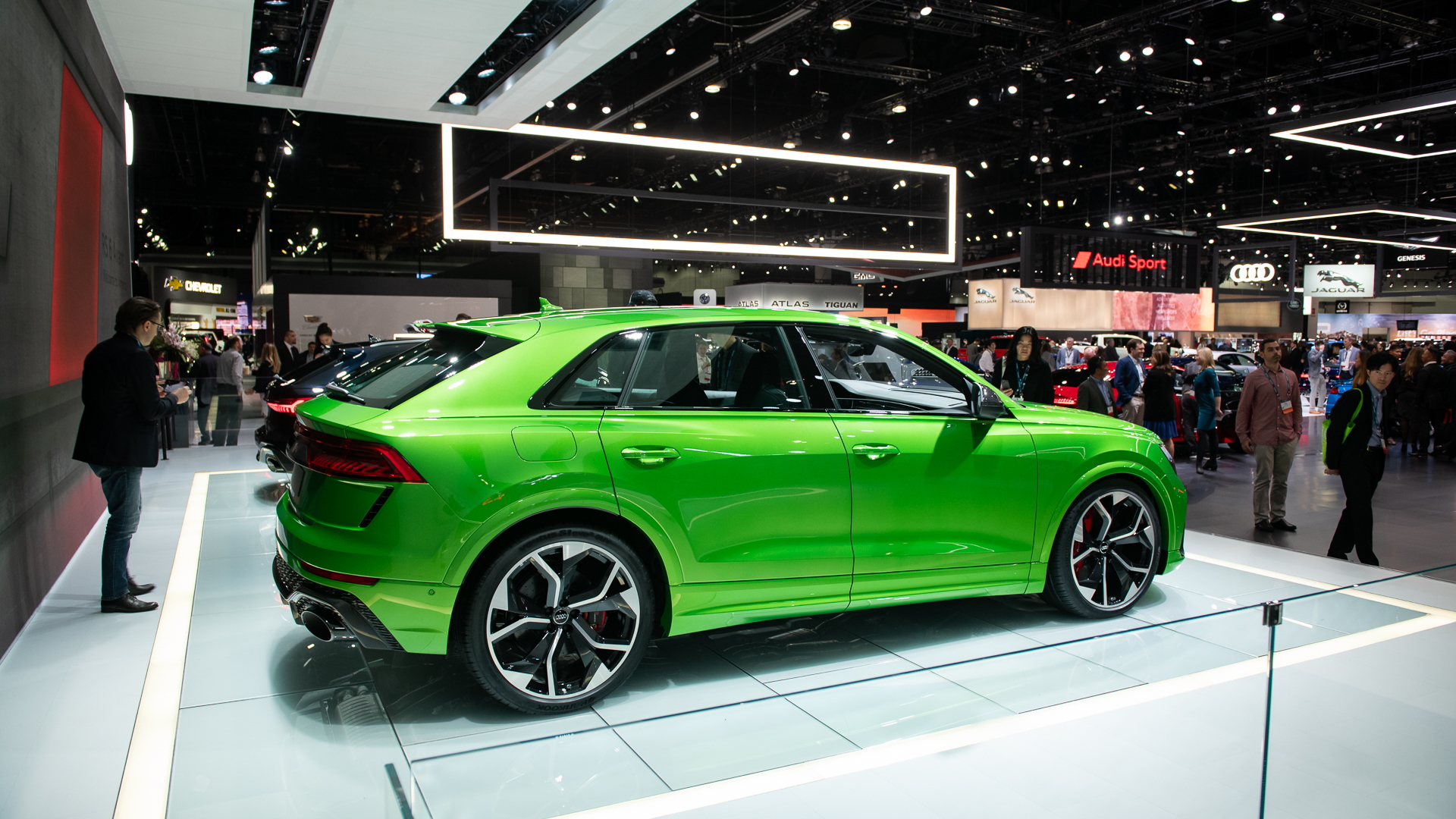 Audi's new RS Q8 made its world debut on Wednesday at the Los Angeles Auto Show.

Developed by the Audi Sport skunks works, the RS Q8 is a crossover SUV whose performance puts many sports cars to shame. We're talking a 0-62 mph time of 3.8 seconds, a top speed of 190 mph, and a Nürburgring lap time of 7:42.253, which is a record for production SUVs.

To achieve those numbers, the RS Q8 relies on the same 4.0-liter twin-turbocharged V-8 found in the 2020 RS 6 Avant and RS 7 Sportback, which made their respective local debuts alongside the RS Q8 in L.A. All three pack an impressive 592 horsepower and 590 pound-feet of torque, together with an 8-speed automatic and rear-biased all-wheel-drive system.

But it's not just about brute performance as Audi's V-8 features cylinder deactivation and mild-hybrid tech. The latter is essentially a belt-driven motor-generator that can recover energy under braking. This energy can then be stored for later use, such as starting the engine during stop-start driving and after a period of coasting. Audi's system allows for coasting speeds of up to 99 mph for periods of up to 40 seconds before the engine is restarted.

Though it's yet to be confirmed, a more powerful plug-in hybrid powertrain is expected in a future RS Q8 Performance model.

For the chassis, the RS Q8 features standard adaptive air suspension and all-wheel steering, while an available active anti-roll system is there to make hard cornering more stable. The latter can be added individually or as part of a Dynamic Package that ups the top speed to 190 mph from the standard 155-mph limit, and also adds an active rear differential and carbon-ceramic brake rotors.

The RS Q8 builds on the already handsome design of the regular Q8 by adding aggressive fascias front and rear, 22-inch (23-inch available) wheels, an aero kit, and Audi Sport's signature dual-oval exhaust tip design. The exhaust is an active system that can be controlled by the driver via the drive mode selector.

For the interior, there are all the standard Audi Sport cues including sports seats, Nappa leather and Alcantara trim, a flat-bottom steering wheel, and “RS” logos everywhere, including in specific displays of the digital instrument cluster. Audi's top electronic driver assist features are also included in the RS Q8. There are more than 30 of them, including adaptive cruise control, lane change warning, and a surround-view camera.

Audi also used the L.A. Auto Show for the world debut of the 2020 E-Tron Sportback. To learn about other vehicles at the show, head to our dedicated hub.