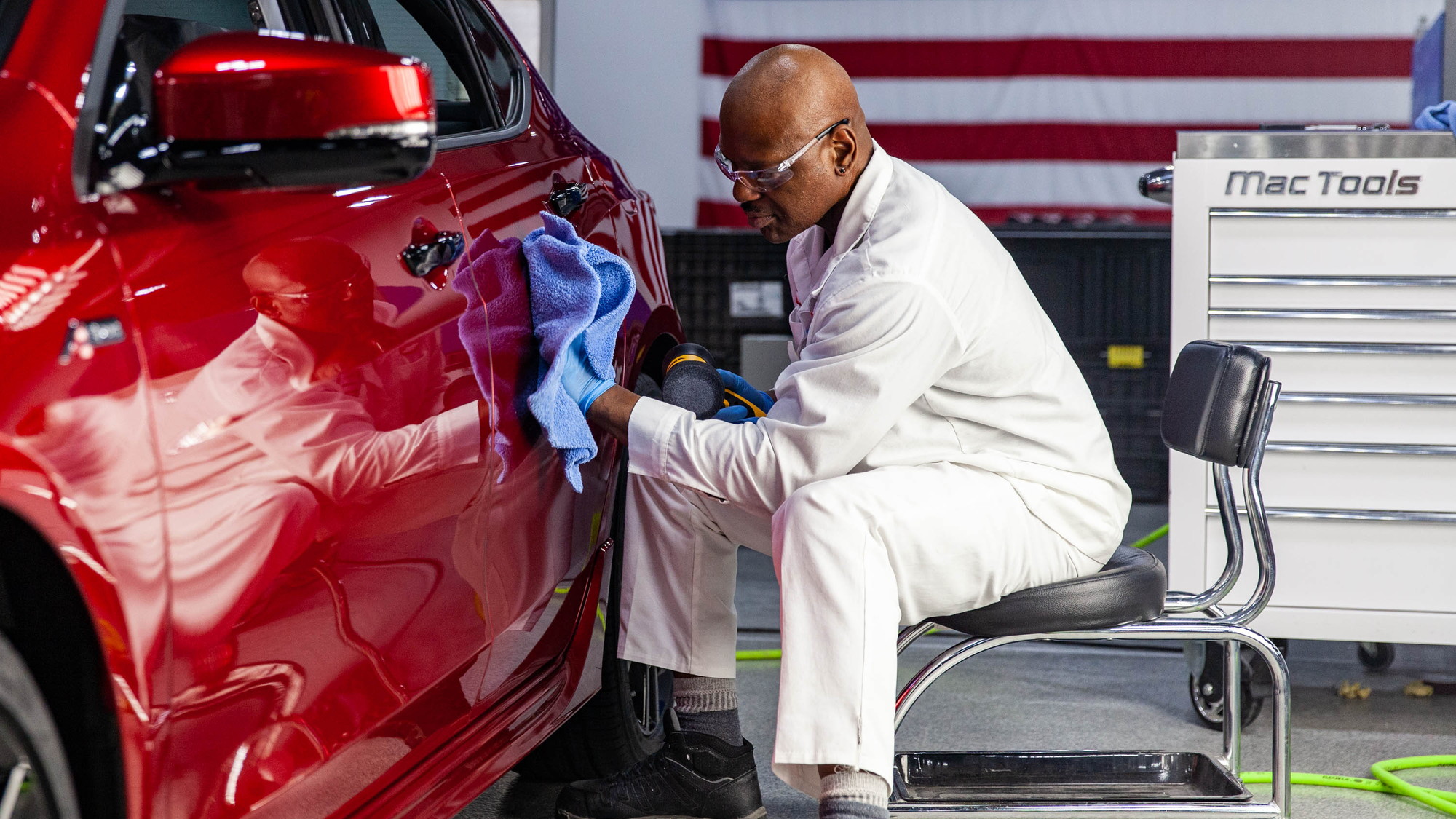 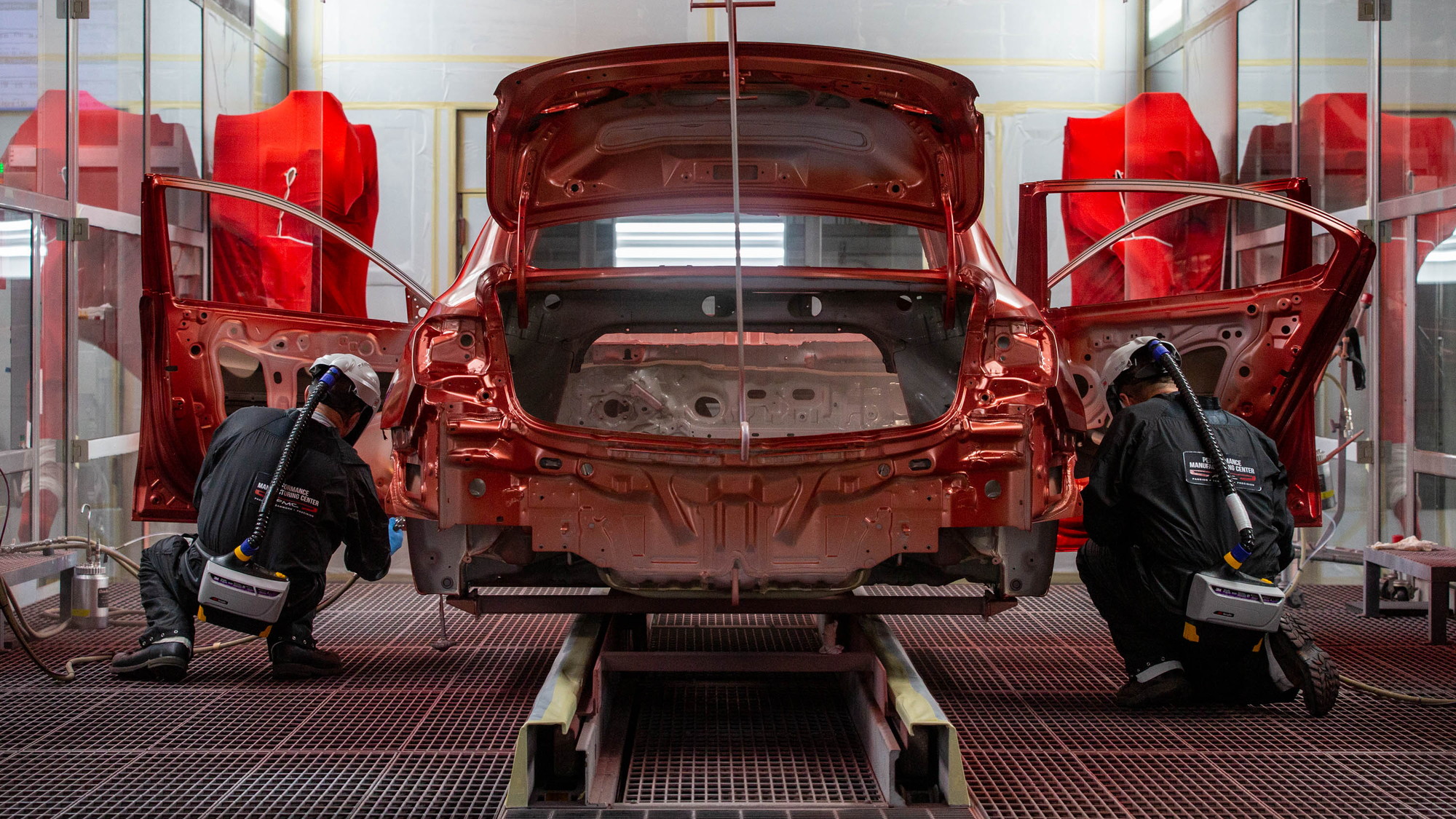 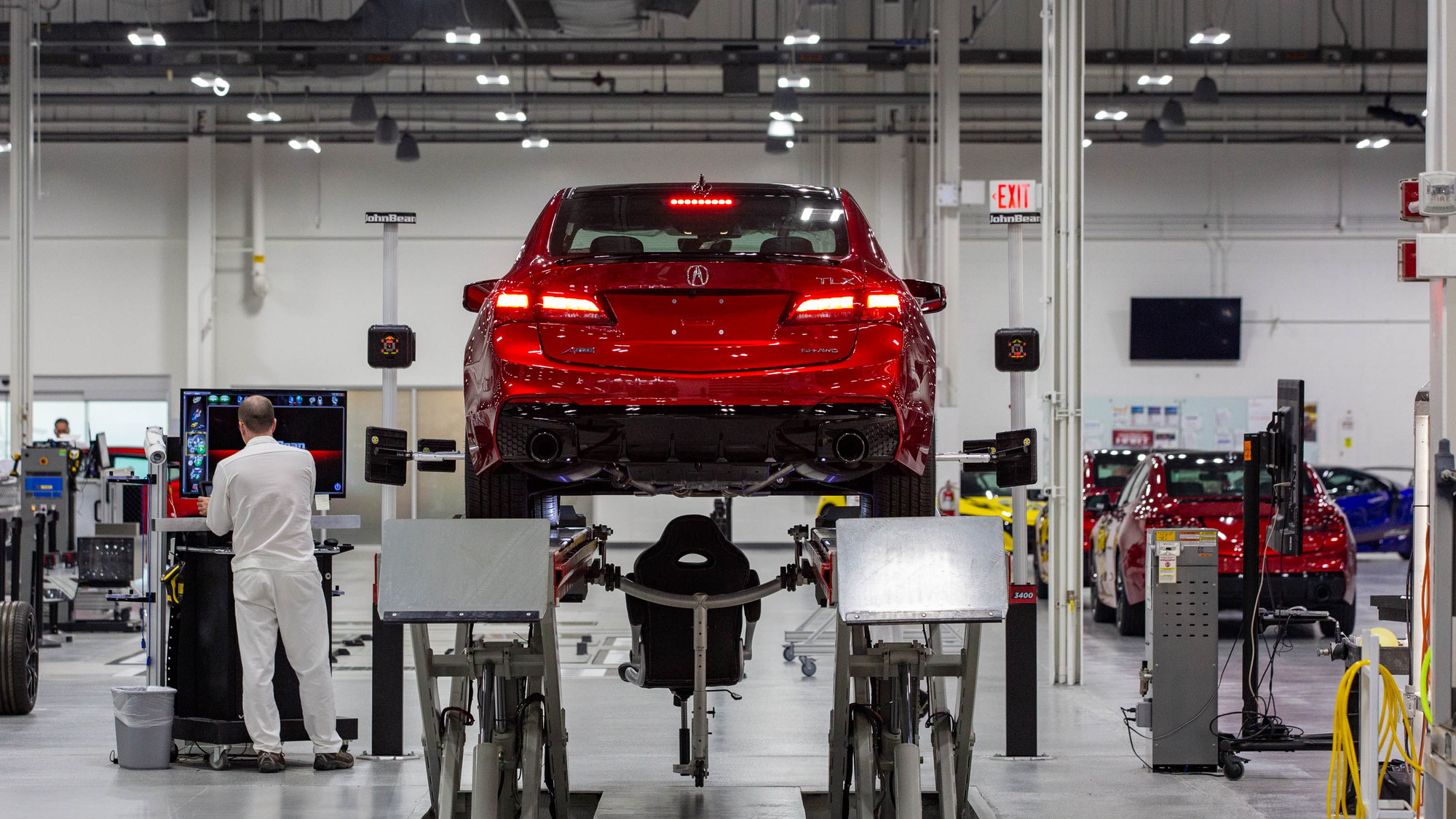 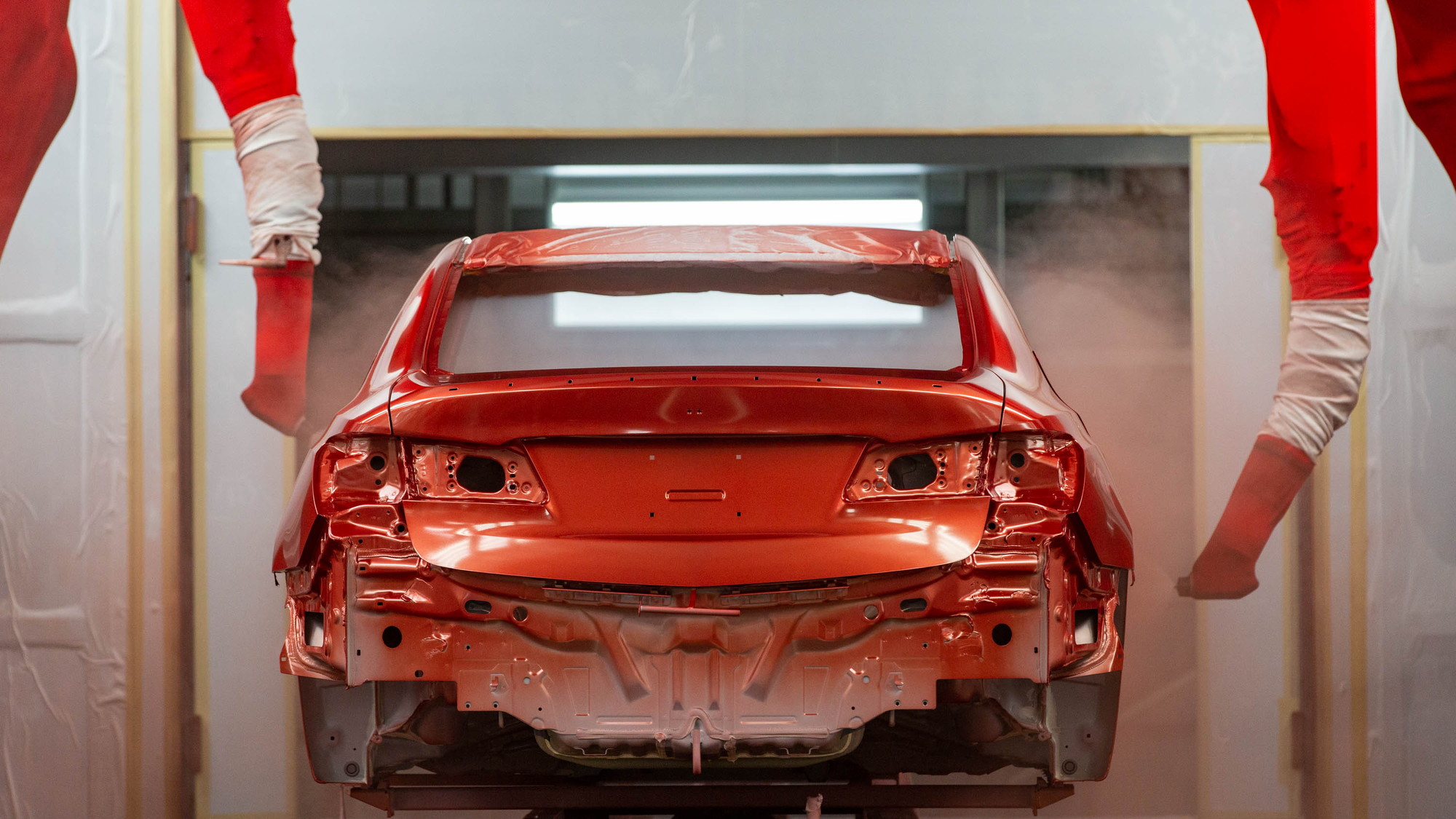 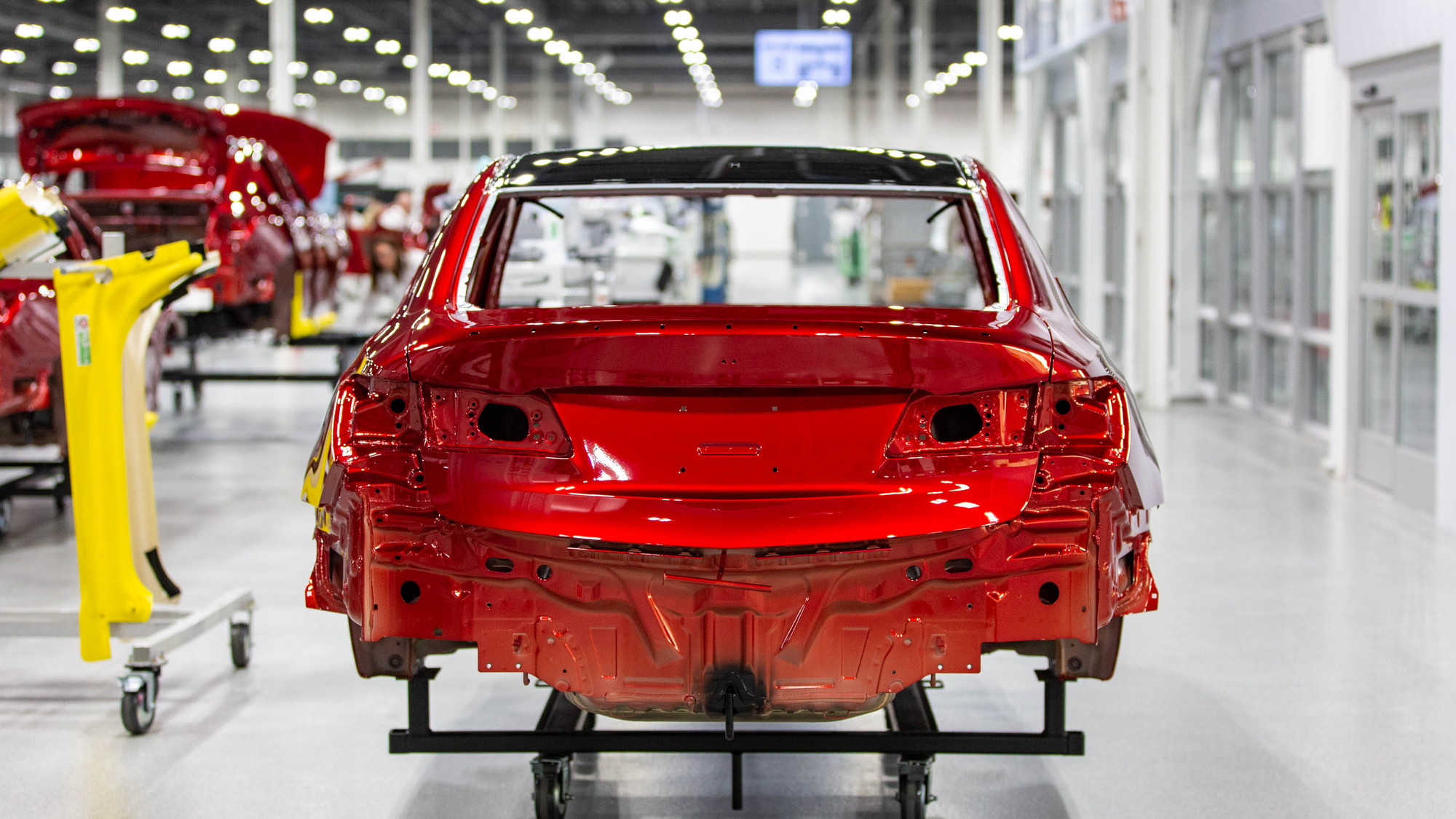 It’s also how exacting Jayme Cummins is in her job. She fits hoods, headlights, and front bumpers to Acura’s most prestigious cars at the Performance Manufacturing Center in Marysville, Ohio. She works on the front lines with the patience and precision of a surgeon and an engineer’s eye for details. She works alone at her station, surrounded by cartons of switchgear and bins of hardware.

Cummins installs the faces for the Acura NSX supercar, and PMC versions of the TLX and MDX by hand—the only cars built at PMC for now. She’s exact and precise where it counts the most, Cummins’ work is mostly noticed only if she deviates from that half-millimeter.

She creates up to six TLX faces per day, sometimes an NSX, which takes longer. She’s steady and quiet as her hand carefully guides in another set of LED headlights. Her coworkers and supervisors can’t remember the last time she’s had a face rejected in quality control.

“She’s more patient than I’ll ever be,” said Jeff Britton, assembly unit manager at PMC. Britton has worked for Honda for 36 years—he knows a thing or two about patience after decades on the job. His first job was installing headlights on Goldwing motorcycles, now he watches workers carefully lower bodies on top of engines and suspension assemblies, in a millimeter-perfect ballet every day.

Britton and Cummins are among roughly 100 workers who clock in and out at PMC, hand-building cars every day for Acura’s top-tier cars.

The process isn’t dissimilar from other luxury automakers. Nearly every luxury brand has its own assemblies built by hand with their own lore. Rolls-Royce is famous for its painstakingly hand-built cars. Bentley and Ferrari have built entire brands based on their hand-building techniques. Mercedes-AMG builders proudly sign their engines.

PMC’s maker’s mark is a PMC emblem stamped onto all the cars it produces, with a serialized number.

Honda is quickly approaching its 40th anniversary of building vehicles in America, which it will celebrate on Sept. 10. The first vehicle that rolled off the line in Ohio wasn’t a car at all—it was a 1979 Honda CBR250 motorcycle. Shortly thereafter, Ohio became the home of Accords and Acura TLs, and now the factory builds as many CR-Vs as it can handle.

Down the street from those assembly lines, PMC operates in an old seat factory that became a warehouse. In 2013, when Acura had plans for a new NSX, the empty floor turned into a “Top Gun” academy for Acura assembly workers. Prospective PMC employees are interviewed and tested, only a few are chosen to hand-build cars at the factory. Their process is exhausting.

The NSX body alone requires more than 900 MIG welds with 148 feet of welded material in each body. Most of the welding is done by robots for consistency, although a skilled welder not only supervises but also programs the robot welders for small deviations in materials and measurements. The robots might do most of the heavy lifting, but multitalented workers supervise nearly every motion.

Welding and preparing NSX bodies and NSX race cars can take up to two weeks for each batch of eight cars; every seamless rivet is scrutinized, and every screw is analyzed.

Susan Dulik is the QA manager and walks the floor each day, inspecting each body in white for the MDX and TLX PMC editions. She also closely follows the progress of every NSX that’s being produced that week. She’s proud to show off the factory floor to new NSX owners—Acura offers a factory tour to buyers where they can see their cars being built. Very often, owners want to install something themselves—a badge or detail—and sometimes they make friends with the workers and text them pictures of their cars long after they’ve been delivered, she said.

Every car that rolls through the facility is carefully watched and documented. Honda keeps torque specs for individual bolts on file for every car for 75 years. Although the process is highly automated, humans and machines are vital cogs in the car-building machine there.

By the time each car hits Lorenzo Christian’s buffing station, which is lit by dozens of LED bulbs, minute imperfections are buffed out and the car is near-perfect.

Christian carefully inspects each corner and crevice, buffing and shining by hand nearly every surface. He works, smiling, polishing every inch of the car until his pearly white teeth are visible in the deeply red paint of the PMC edition cars. Behind his station, an oversized American flag that’s roughly 10 feet tall hangs on the wall. It’s a reminder of the big pride each PMC assembler has in the small details rolling out of the American factory.

After Christian completes his work, the cars roll toward a road simulator—a “four-post shaker”—that exposes any engineering flaws in chassis or suspension. The shaker takes the place of a road test after assembly—each engine is already broken in—and the cars roll onto the covered trailer with fewer than 3 miles showing on the odometer.

Even after building thousands of cars, Britton said he still walks out onto the floor when engines are started, before they hit the shakers.

He can hear it from the conference room just behind the frosted glass doors that open to the entryway, where new buyers see the production home for Acura’s flagship models.

“It’s the heart of every car, coming to life for the first time.” Britton said. “It’s when they come alive.”