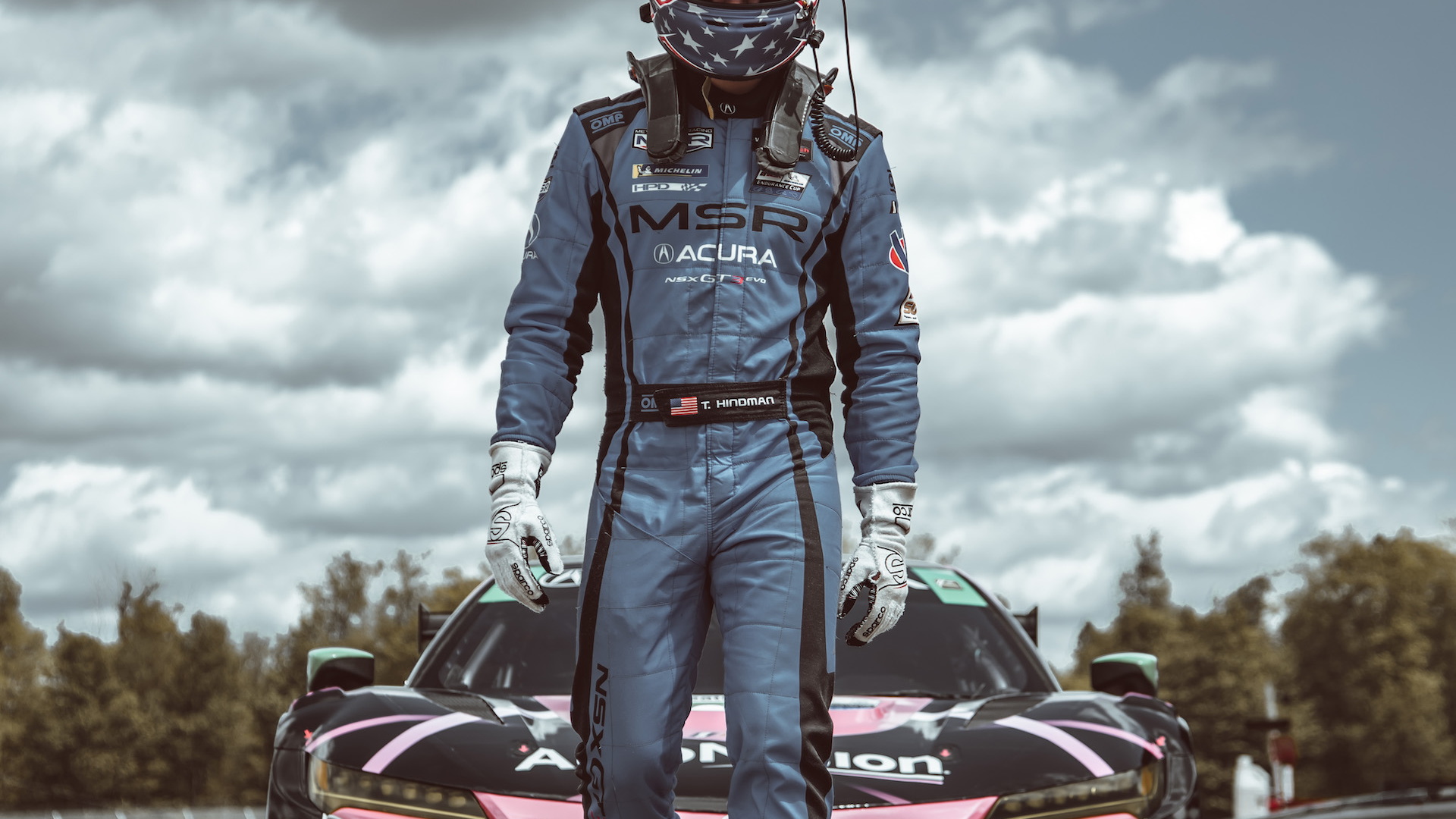 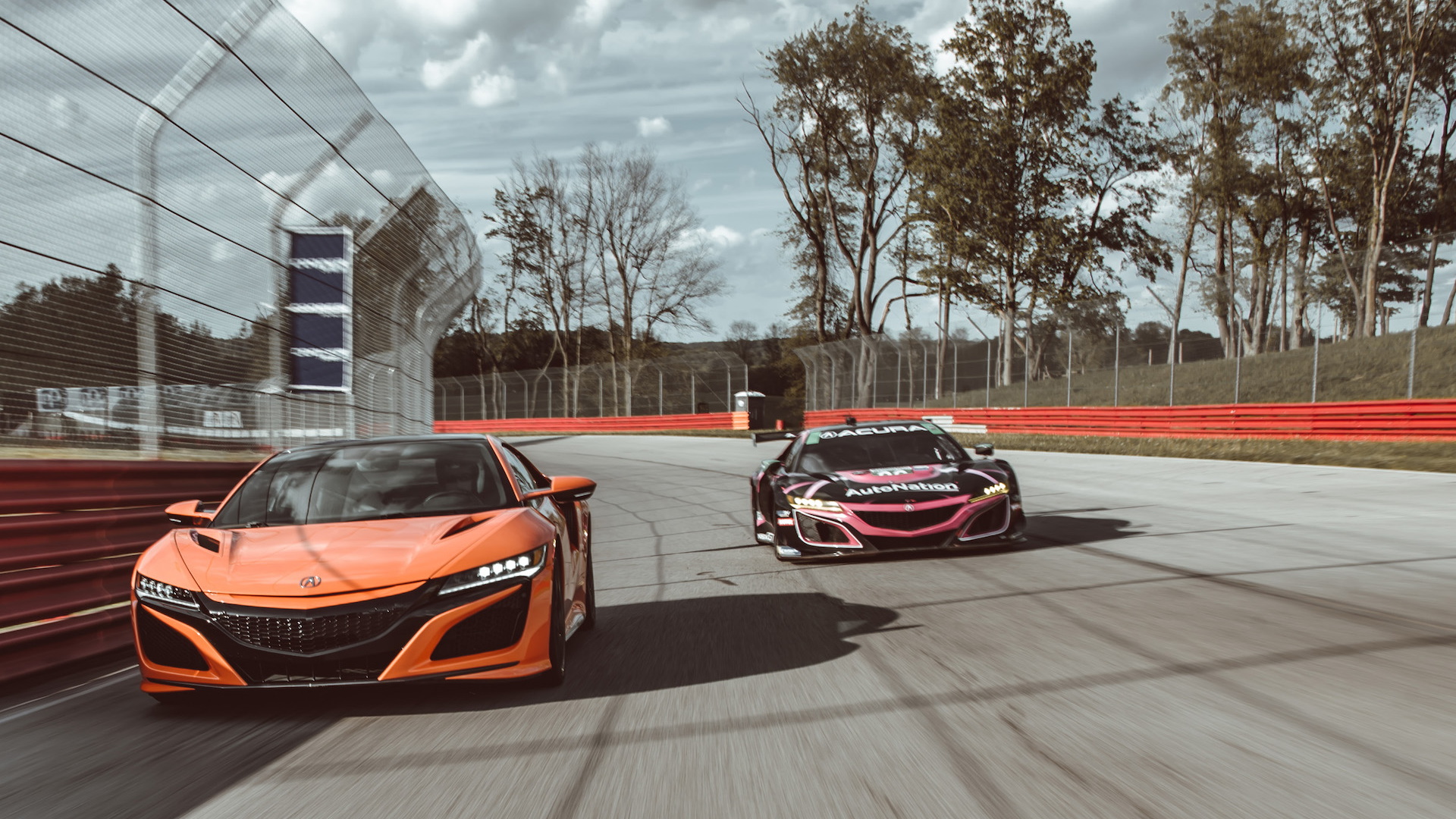 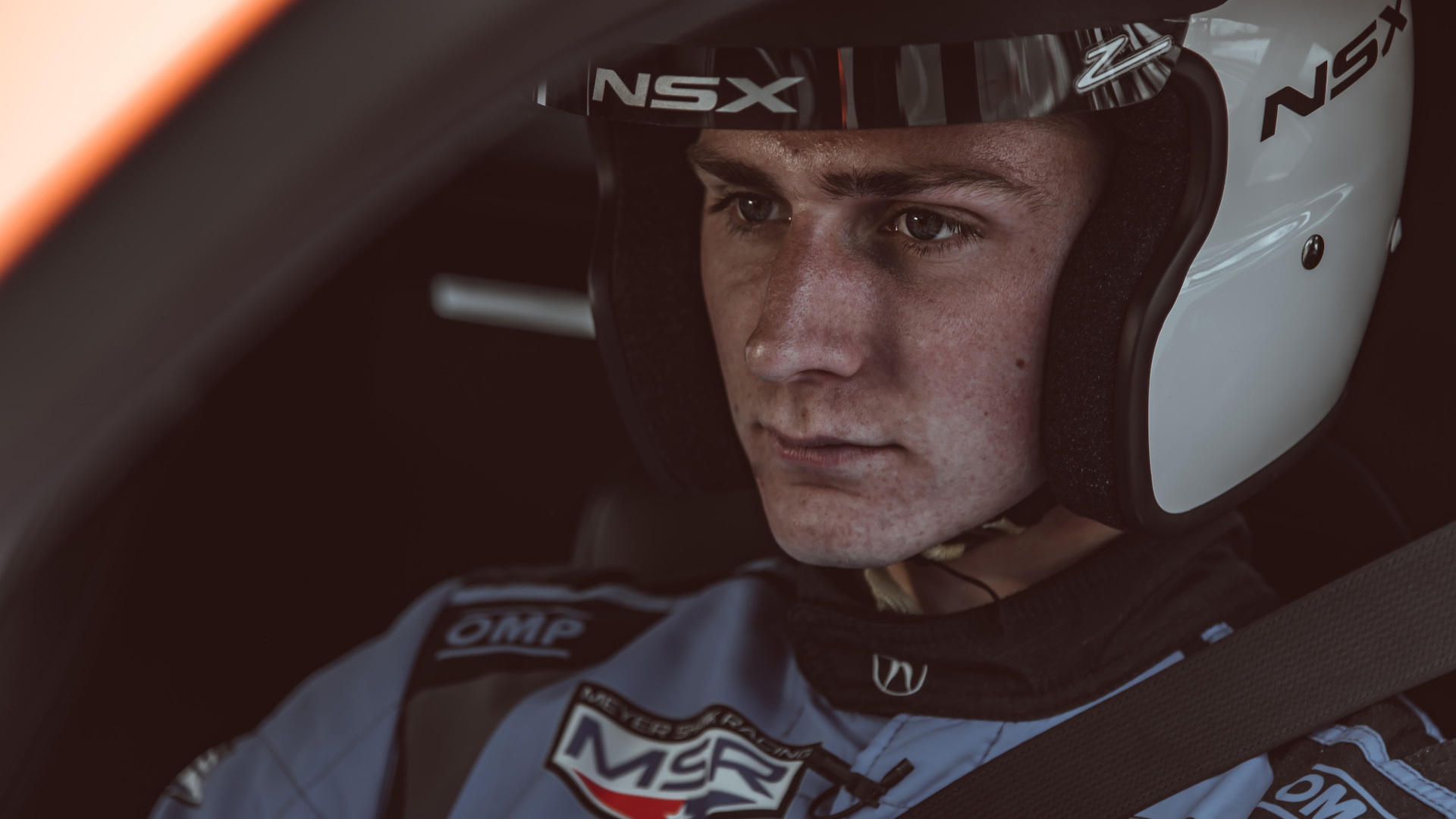 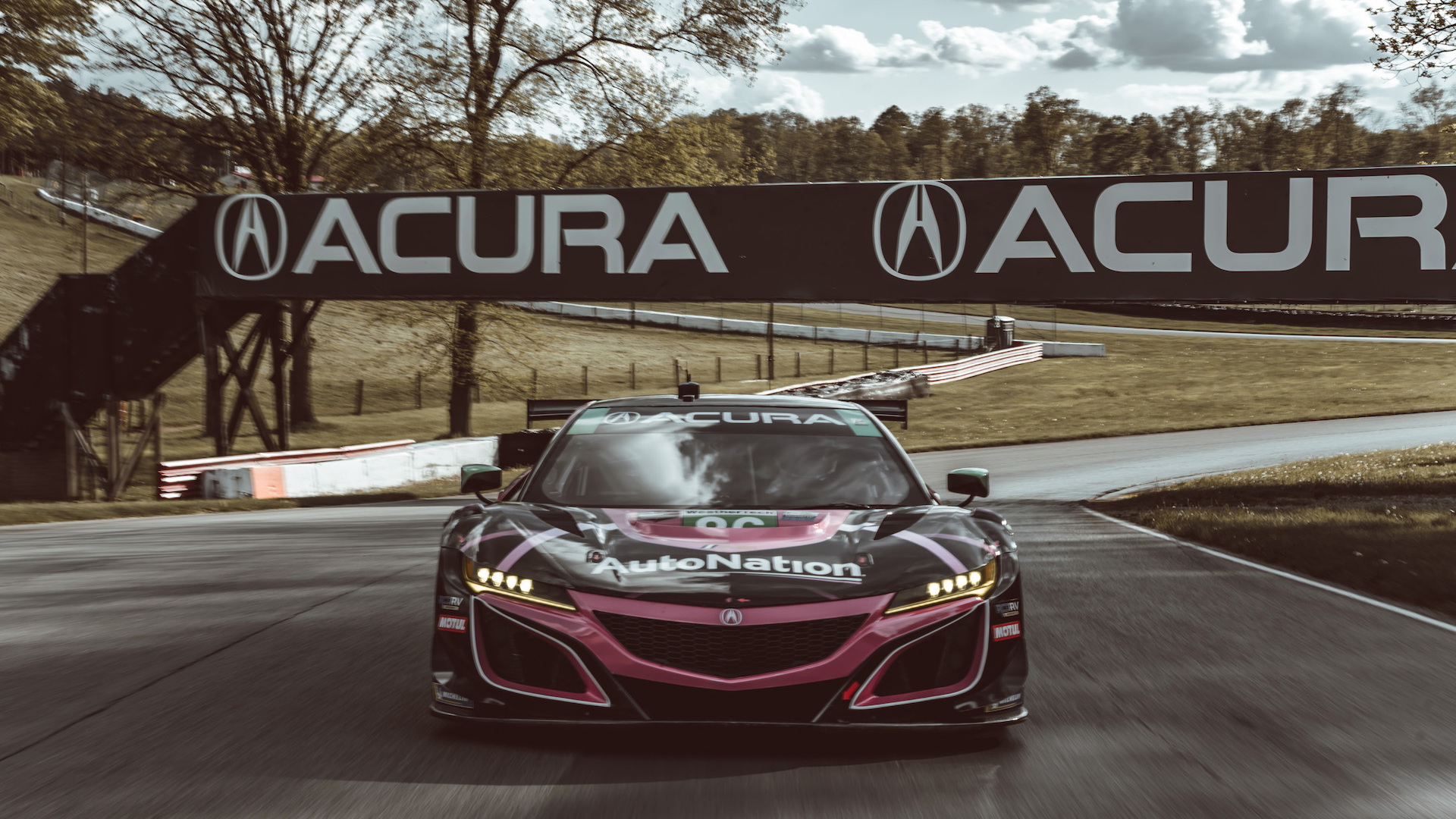 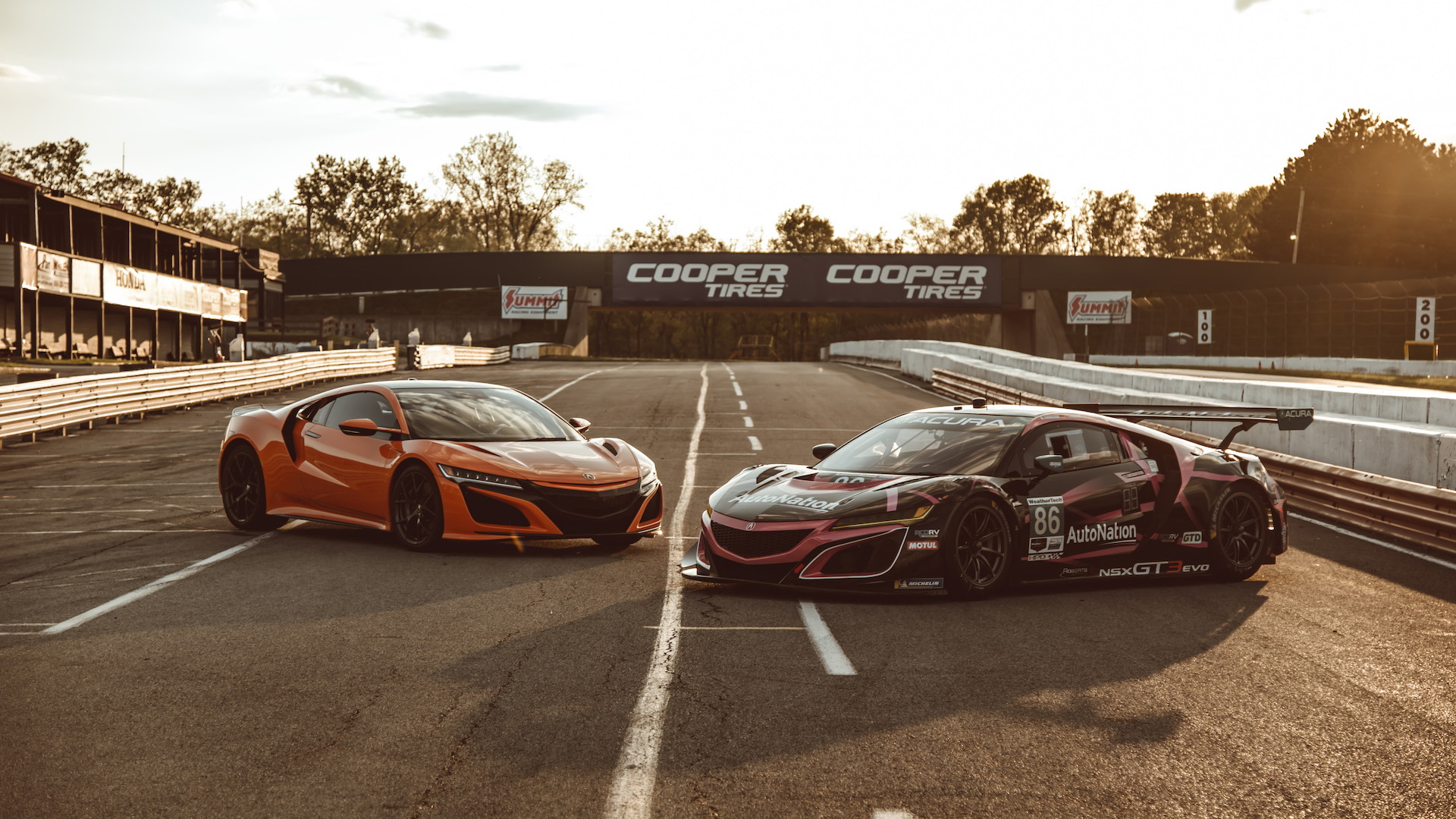 Acura cars have raced for 32 of the 34 years the company has been in business, but no production-based Acura race car has ever been as capable as the current NSX GT3 Evo that competes in the IMSA GTD series. From strong roots come strong trees, and the reason the NSX GT3 Evo is so fast—it currently leads the GTD standings with Trent Hindman behind the wheel—is because it's based on the NSX street car, a mid-engine car that was developed to take on the likes of Ferrari and Lamborghini.

Hindman made the accompanying video for Acura to highlight the differences between the road car and the race car and compare some performance metrics. Motor Authority spoke to Nathan Bonneau, Team Manager at RealTime Racing, which campaigns the NSX GT3 Evo, for additional information during a recent test day at Road America. The cars aren't as different as you may think, and they share 80 percent of their parts.

Both cars are built at Performance Manufacturing Center in Marysville, Ohio, and both use the same aluminum spaceframe. Cars that will become GT3 Evos then ship out to J.A.S. Motorsports in Milan, Italy to be constructed. While the road car gets aluminum body panels, the race car has carbon-fiber panels that are wider and have more cooling ducts to handle the rigors of racing. 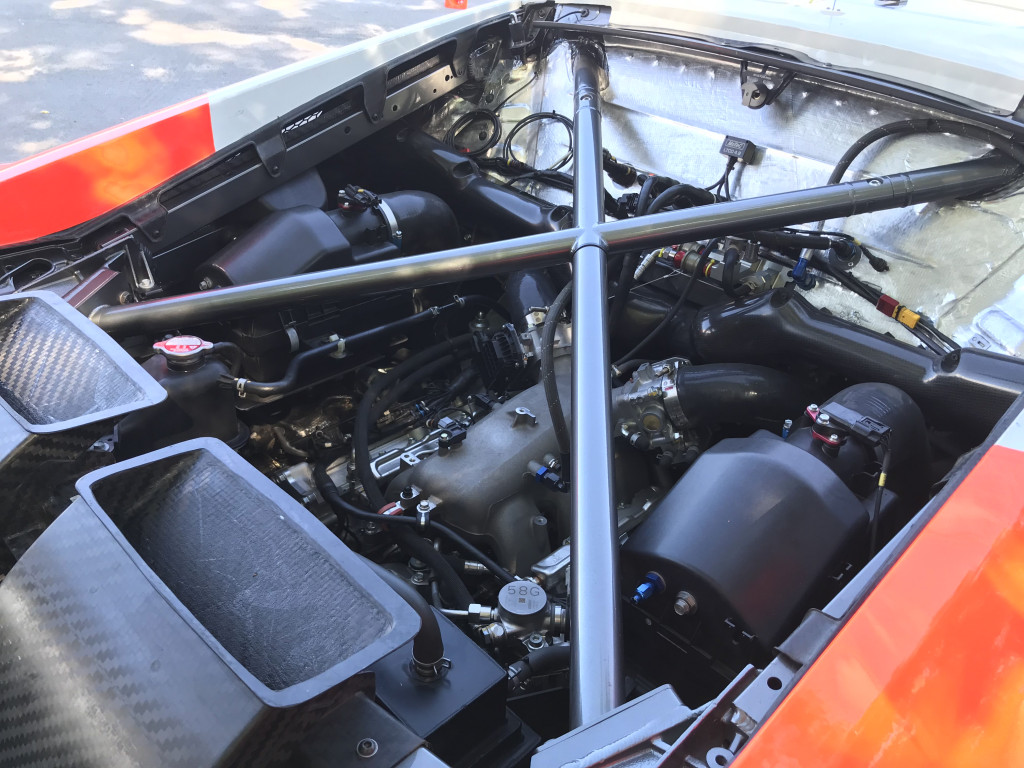 The street car's three-motor hybrid system is one of its strengths. It adds about 73 of the car's 573 horsepower and provides both all-wheel drive and torque vectoring on the front axle. GT3 racing requires rear-wheel drive, so the hybrid system is removed from the race car. That takes away not only AWD, but also torque vectoring and power. To make up for it, Acura applies more turbo boost to the 3.5-liter V-6 with upgraded bearings and propellers in the stock housings to create 550 hp and 475 pound-feet of torque. That leaves the race car 23 hp and just 1 lb-ft shy of the street car. The racing engine also gets an external oil filler to replenish quicker while endurance racing. The intercoolers are stock, but the radiator and air boxes aren't due to the added cooling that's needed for racing. Both engines are assembled by hand.

The race car also uses an Xtrac 6-speed direct-shift racing gearbox instead of the 9-speed dual-clutch transmission from the street car. It comes with a hand-operated clutch to launch the car and paddles to shift the rest of the gears. 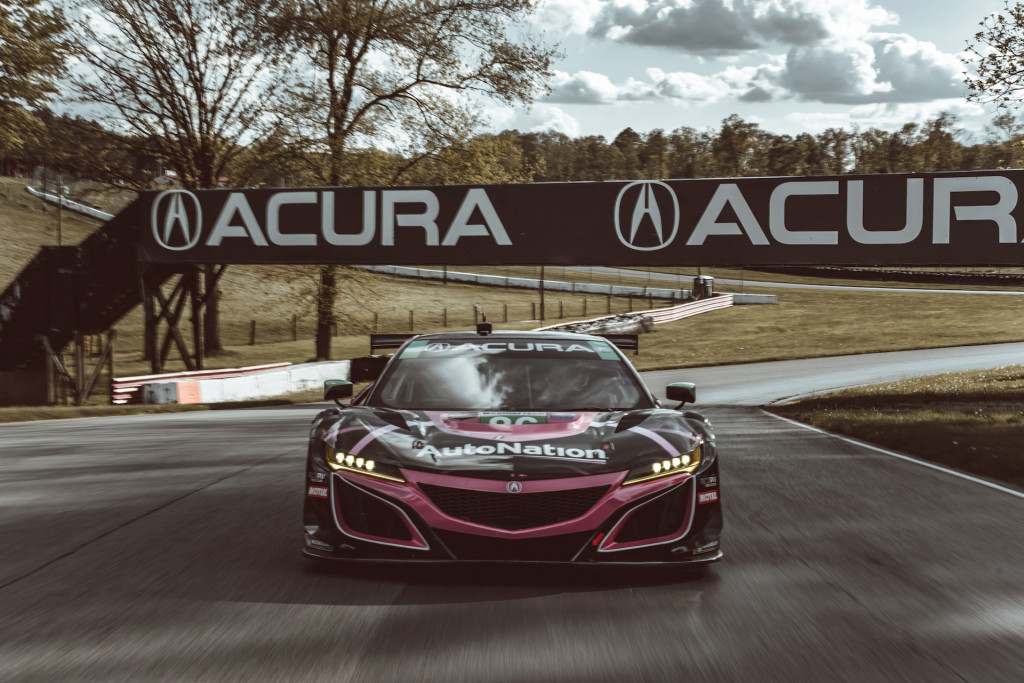 Trent demonstrated the launch sequence for both cars and the results were astounding. The GT3 Evo, which runs from a rolling start during races, spins its tires and posts a respectable 4.35-second 0-60 mph time. The street car, however, engages its launch control and simply goes like a bat out of hell to put up a 2.92-second 0-60 mph run. Advantage, street car.

Brakes are next. The NSX street car is offered with optional carbon-ceramic brakes sized at 15 inches up front and 14.2 inches in the rear. The race car gets iron brakes, 15.4 inches up front and 14 inches out back. While the street brakes need to last a long time, the racing brakes only need to last for a race, and they have more cooling thanks to larger ducts and a Bosch ABS system tuned for racing. However, the street car has an ace up its sleeve as well. Hindman says the regenerative braking of the hybrid system is a big help with initial deceleration. Hindman likes both systems and Acura doesn't do a 60-0 mph stop, so there is no winner in this test.

Trent then moves along to ease of use, which the street car runs laps around the race car. Race cars are complicated, and one look at the steering wheel is proof. Behind the wheel, Trent can adjust traction control and engine mapping, flash the headlights, activate the radio to talk to his crew, even get a drink, all while racing. However, he says among GT3 cars the NSX Evo is very forgiving and attacks corners. The street car, however, is far easier, and its hybrid-aided Super-Handling All-Wheel Drive system improves drivability and balance. Trent says it's just as gratifying for him as an average driver.

Finally, Trent puts the two cars to the ultimate test by comparing lap times on the Mid-Ohio's Sports Car Course. Folks, it's not a contest. One is a race car, one is a street car. The race car wins, hands down.

There are plenty of reasons for the race car's win. First off, it weighs 950 pounds less than the street car at about 2,800 pounds. The carbon-fiber body panels remove weight, the lack of federally mandated emissions and safety systems saves weight, and removing sound deadening saves weight. It also doesn't have heavy power-adjustable seats, an audio system, or glass. Air conditioning is actually optional in the race car.

The suspension components are also swapped out, though they use the stock pick-up points, according to Bonneau. The suspension also retains the double-wishbone front and multi-link rear geometry, and the track is about 2 inches wider up front and 2.7 inches wider in the rear. 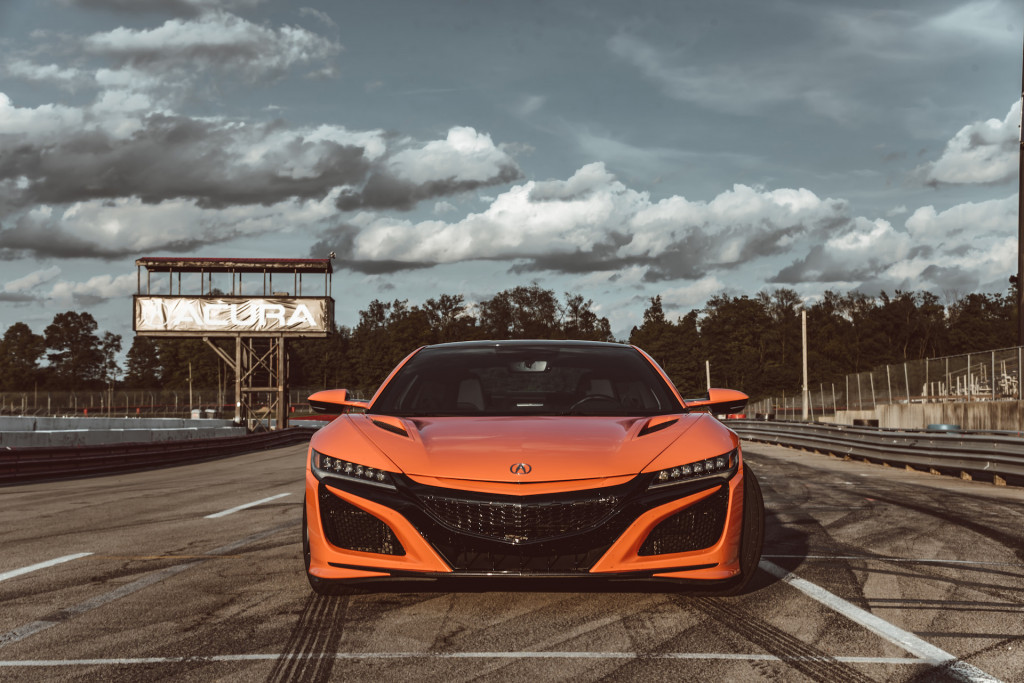 The street car also has updated-but-still-not-very-sticky Continental Extreme Contact DWS 06 tires (or optional Pirelli Trofeo Rs) while the race car has super sticky racing slicks. Those slicks are mounted to center-locking forged aluminum 18-inch wheels instead of the street car's 19s and 20s.

How does that all translate to track times? Well, we'll let you click on the video above to find out.

Anyone can buy both cars. Go to the dealer for the street-legal NSX and expect to pay about $160,000. For the race car, call Honda Performance Development and be prepared to write a check for $525,000. That money comes with support for your GT3 and GTD racing efforts.

Acura provided lodging to Internet Brands Automotive to bring you this firsthand report.