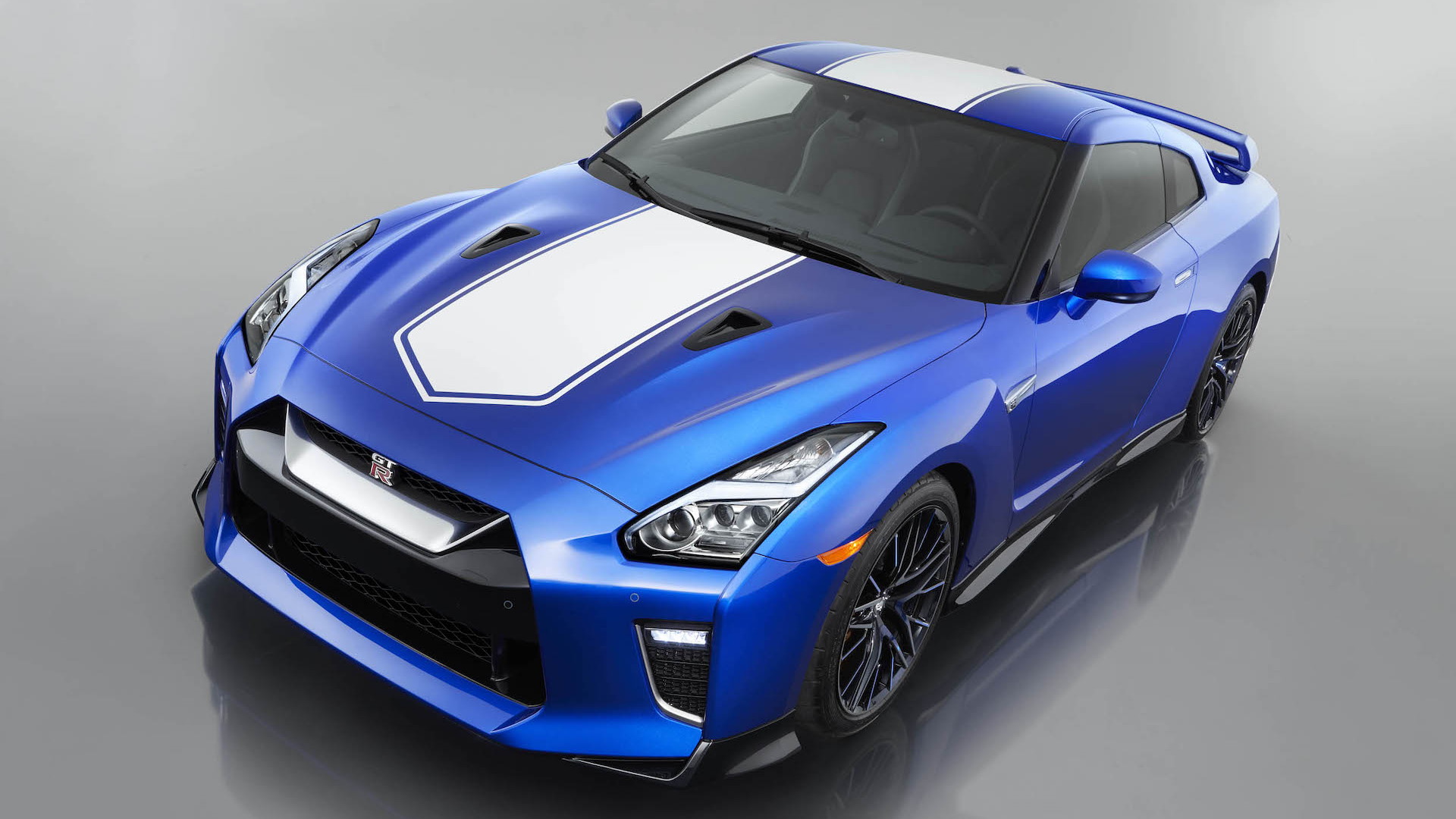 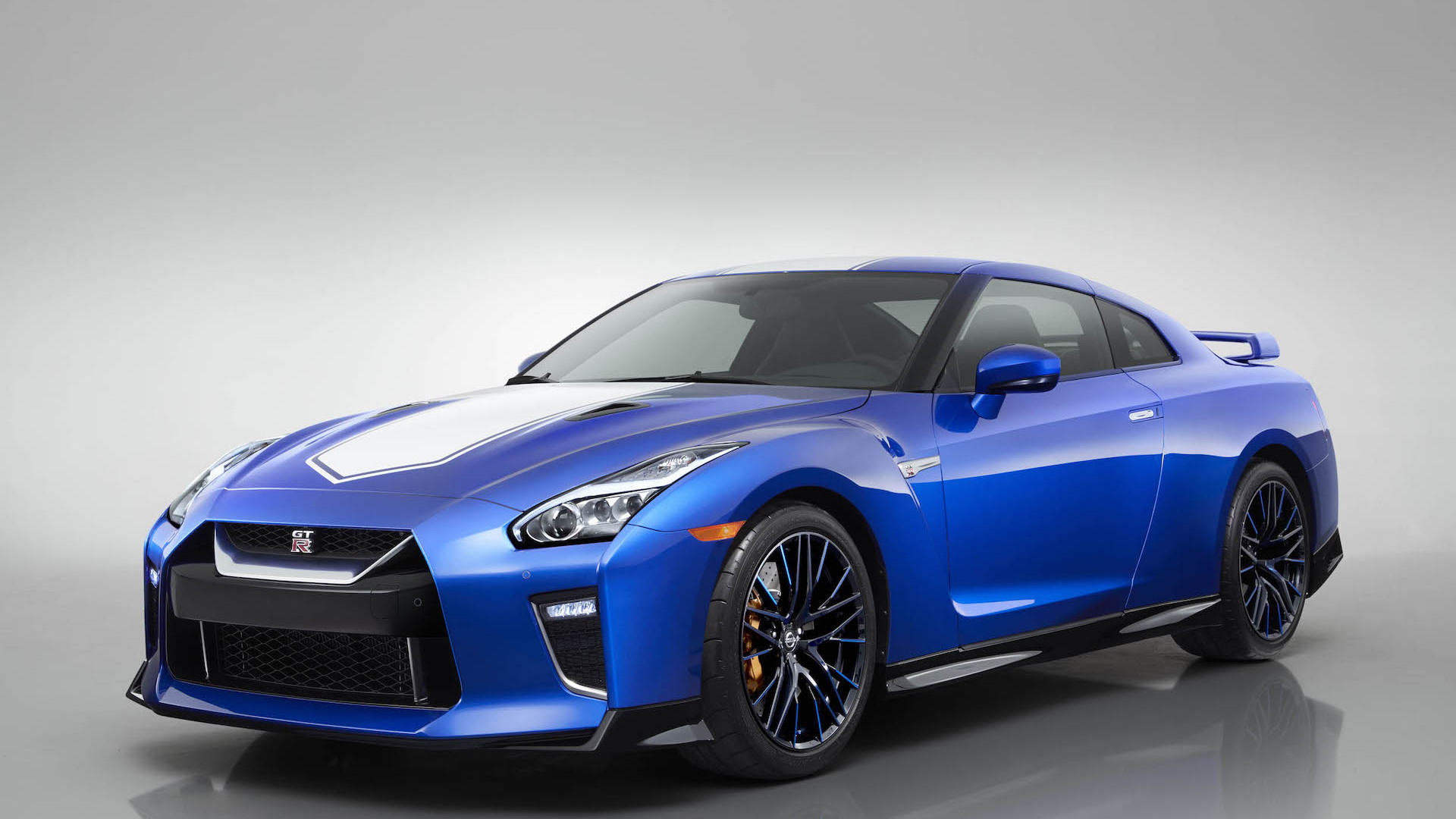 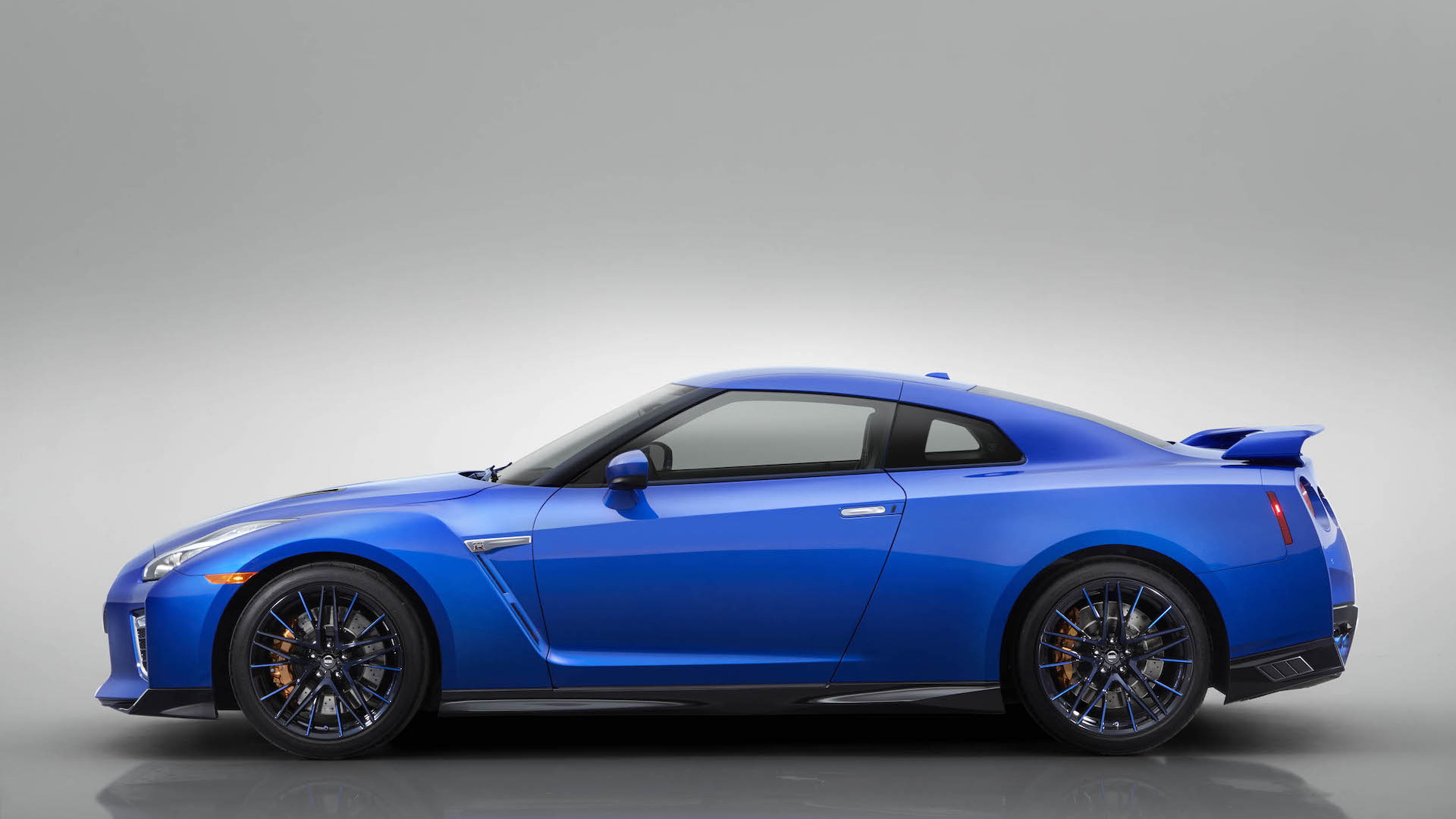 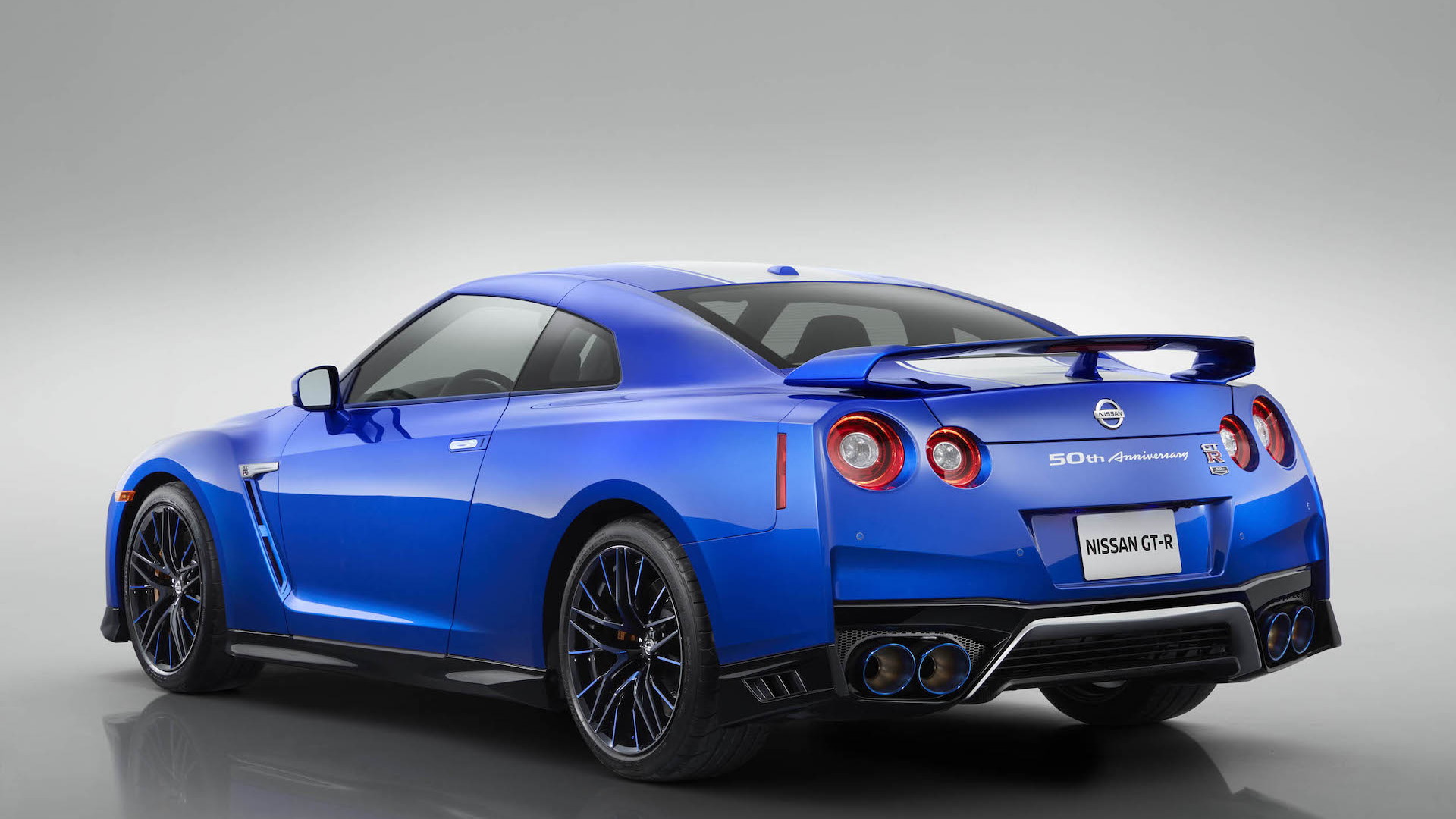 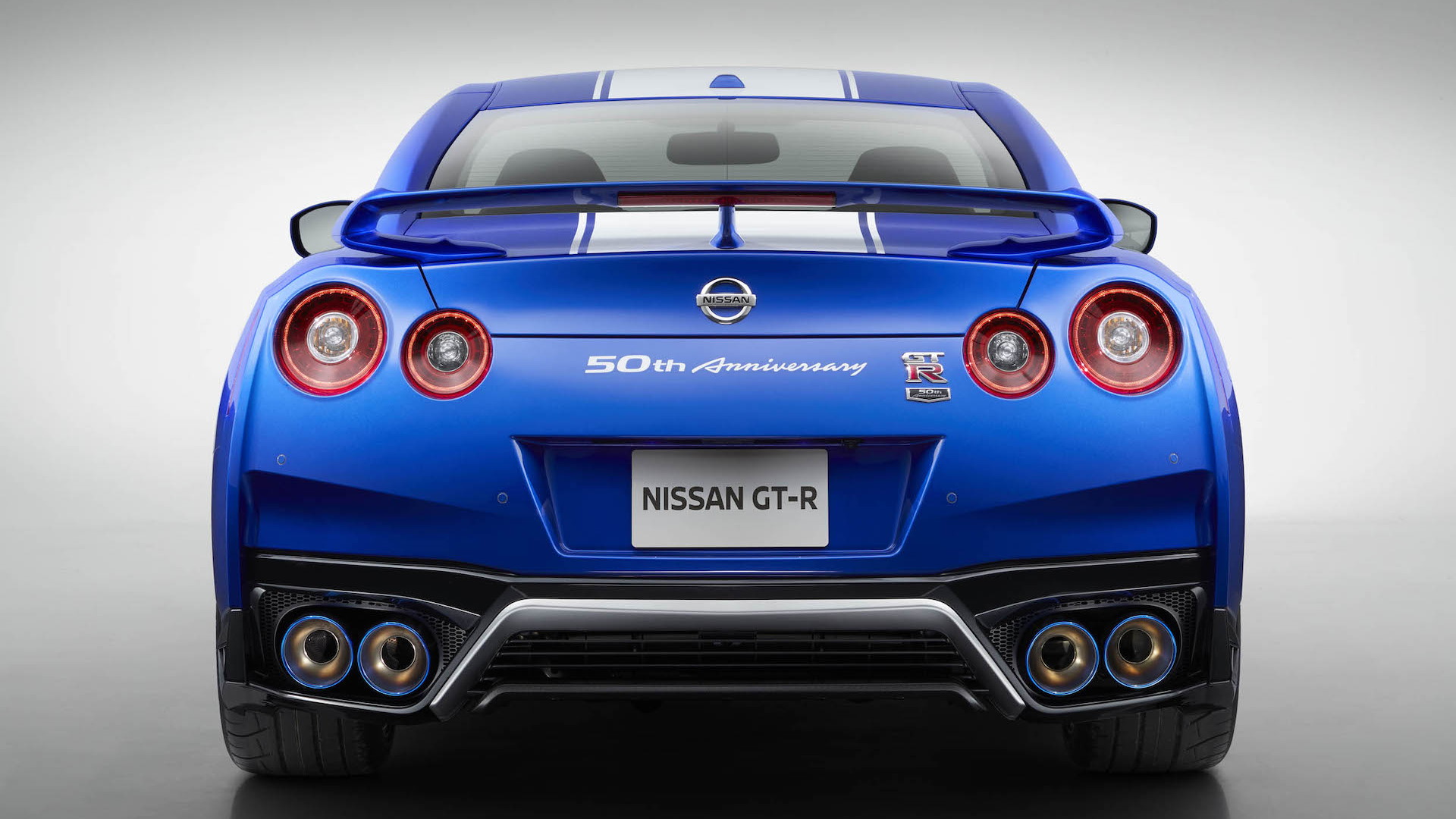 The Nissan GT-R, an R35 to those who know their GT-Rs from their Skylines, was unveiled to the world in 2007 and on sale in the United States the following year as a 2009 model.

More than a decade on, the GT-R is still once of the fastest cars in production thanks to continual updates over the years. The latest have been introduced on the 2020 Nissan GT-R, on show this week at the 2019 New York International Auto Show.

The more substantial changes concern the more extreme GT-R Track Edition and GT-R Nismo models, but the base car, known as the Premium, benefits from a special 50th anniversary package that's available with the GT-R's iconic Bayside Blue paint. There are also special touches in the cabin, which is finished in gray for both the dash and seats. The Track Edition and Nismo can also be ordered with the 50th anniversary treatment.

The GT-R Premium still runs a 3.8-liter twin-turbocharged V-6 that generates 565 horsepower and 467 pound-feet of torque, but the turbochargers are new and help to provide better response at low revs. The exhaust manifolds also feature redesigned turbo flange attachment points, which makes detaching the turbochargers easier for maintenance or modification. A new titanium muffler with burnished blue tips has also been added.

The engine is mated to a 6-speed dual-clutch transmission mounted at the rear for better weight distribution and drives all four wheels via a sophisticated all-wheel-drive system. The transmission's R mode has been tweaked for more aggressive downshifts, and the suspension and steering systems have also been tweaked for improved performance and accuracy. Finally, a new brake booster improves brake response by making the brakes engage with less pedal stroke.

Opting for the Track Edition now nets buyers the same engine in the hardcore Nismo model. It's still a 3.8-liter twin-turbo V-6 but now output registers at 600 hp and 481 lb-ft, up from 565 hp and 467 lb-ft previously. Response has also been improved thanks to new turbochargers with a turbine similar to the one used in the GT-R Nismo GT3 race car.

As its name suggests, the Track Edition has been developed with track-day driving in mind. It’s not as hardcore as the Nismo but does pick some of that model's go-fast goodies. The list includes Bilstein suspension with adjustable dampers, a lightweight anti-roll bar, and Nismo-spec 20-inch wheels. Optional extras added for 2020 include Brembo carbon-ceramic brake rotors (16.1 inches front and 15.3 inches rear) and a carbon fiber roof.

As for the Nismo model, the 2020 model year sees the car adopt more carbon fiber on its exterior, including in new front fender vents. Many other body panels, including the roof, are also made from the lightweight stuff. The wheels are a set of 20-inch RAYS that are lighter than before, and they come wrapped in Dunlop tires with a contact patch that's 11-percent wider than before. The Nismo also gets the aforementioned Brembo brake package as standard.

The 2020 Nissan GT-R will be available from the summer. Pricing information will be announced closer to the market launch.

For more on the Nissan GT-R, read the in-depth reviews at The Car Connection.