Are you a fan of the dystopian-future motion picture "Terminator 2: Judgement Day"? Of course you are! It's a great film that highlights the role of Skynet in the coming robot-driven apocalypse. One of the highlight vehicles featured in the film is a 1991 Harley-Davidson Fat Boy. It was ridden by Arnold Schwarzenegger through the Los Angeles River as he helped John Connor (portrayed by Edward Furlong) escape the menacing T-1000 Terminator. That very bike is still around, and it's heading to auction.

The Hollywood auction house Profiles in History is set to auction off millions of dollars worth of movie memorabilia. That includes everything from clothing and prop guns to set models, miniatures, and actual screen-used vehicles. One of those is the "T2" motorcycle, and it's expected to fetch a serious amount of cash. Pre-auction estimates peg the value of the bike between $200,000 and $300,000. 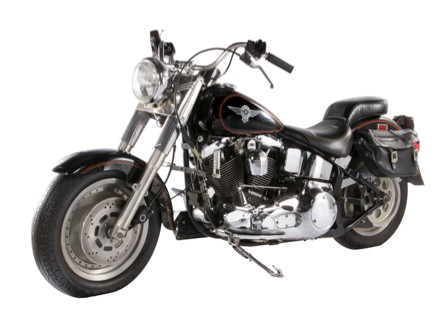 Harley from Terminator 2 heads to auction

According to the auction guide, this 1991 Harley shows just 392 miles on its odometer. It has some minor scratches and dings, it lacks side mirrors, and the rear saddle has three tears. Additionally, the mechanical bits are untested. That shouldn't stop a potential buyer from jumping on this bit of movie history, though. If desired, it also should be pretty easy to get the bike running again.

Interested bidders should take a look at a few other items up for auction. The license plate used on the bike during filming is a separate item that should sell for between $1,000 and $1,500. Arnold Schwarzenegger's jacket from the first "The Terminator" film is also on the docket and it should fetch between $20,000 and $30,000.

If you're not a fan of the earlier "Terminator" films, watch them again because they are great. However, Profiles in History has other vehicular lots that might interest you. The auction house has Dylan McKay's 1964 Porsche convertible from the 1990s show "Beverly Hills 90210," though it has no drivetrain. The 1978 Triumph Bonneville 750 driven by Richard Gere in the movie "An Officer and a Gentleman" may earn between $30,000 and $50,000. Finally, the actual bus from "Speed" is on hand as well. With a pre-auction estimate of just $20,000 to $30,000, the 50-mph bus represents the most movie vehicle bang for the buck.