The Nürburgring was playing host to the annual VLN 24-hour race this past weekend, and Porsche took the opportunity to bring its hybrid race monster to the track. There it would take a lap of the 15.7-mile combined Nordschliefe and Grand Prix sections, so it was no record attempt. Also, the 919 wasn't alone as Porsche also brought a 956 C to join in on the fun.

Group C racing was filled with lightweight, high-powered machines designed for insanely high speeds. One of the greats of that era was the Porsche 956 C. In 1983, Stefan Bellof drove a 956 C around the 'Ring in a still-unbeaten time of 6:11.13. German race car driver Hans Stuck has experience with the car as well, and he's also spent time winning with its replacement, the 962.

He donned his suit and helmet for another trip around one of the world's great circuits. 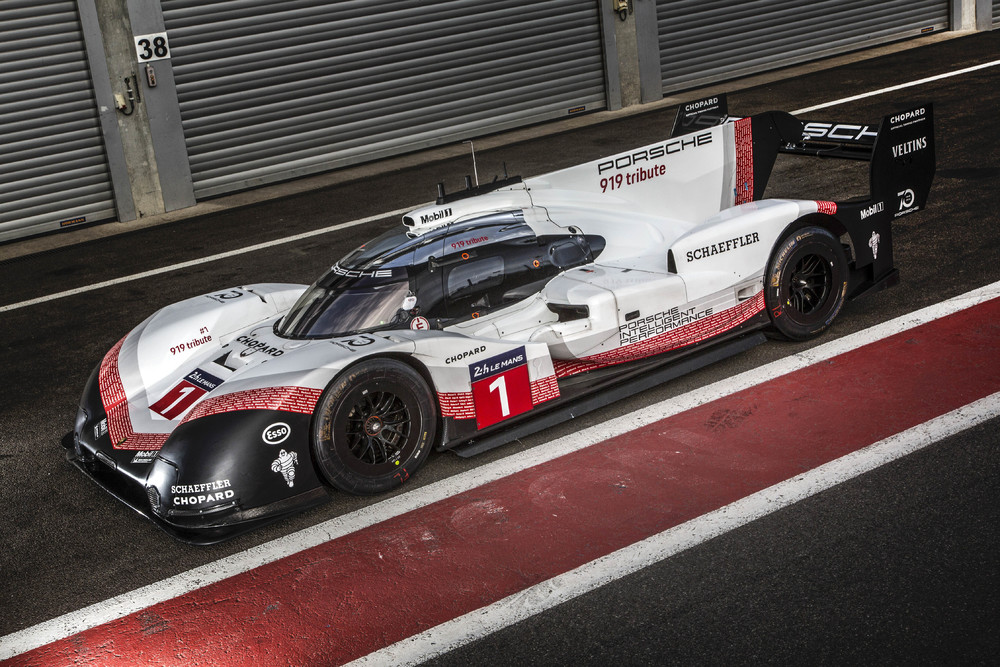 Porsche brought the 956 C to the 'Ring so it could accompany the 919 Evo around the track. Stuck piloted the 956 while the far more modern 919 was helmed by Timo Bernhard. Both drivers know the track well, and both are adept at handling the similar yet still very different race cars.

The Porsche 956 C is powered by a 2.65-liter turbocharged flat-six. Power production was rated around 635 horsepower, and it was routed to the rear wheels by way of a five-speed manual gearbox. Ground effects aerodynamics were utilized on the 956 and it was able to develop more than triple the amount of downforce compared to the older 917 it replaced.

On the 919 Evo, technology is tantamount. Here we're dealing with a hybrid racing machine that features a turbocharged 2.0-liter V-4 producing 720 horsepower. There are a pair of electric motor-generators, extremely aggressive aerodynamics, and a distinct lack of headlights since this car is able to exist outside of any series rules. The way the car is currently set up allowed for a new record 1:41.77 lap time at Spa. We're waiting to hear of a record lap attempt at the 'Ring, but Porsche remains quiet on the matter.

Porsche continues to bring its 919 Evo out to fans all over the globe, and the 'Ring was a smart stop. Along the 15.7 miles of track, many fans could line up near the fence to watch two motorsport legends drive on past. This video helps capture a bit of that wonderful moment.