Hennessey Performance Engineering stirred the supercar pot when it revealed the Venom F5 at the 2017 SEMA show last month, but the concept car lacked a proper interior at its debut. For now, photo sketches of the supercar's interior will have to do. A HPE fan page revealed two images of the Venom F5's interior on Monday, which supposedly preview a full reveal at a later date.

The two images show one cockpit outfitted with an optional "racing steering wheel," which has a screen where the airbag assembly normally sits. The other image shows a more traditional steering wheel with a digital gauge display in front of the driver in the dashboard's instrument cluster.

Otherwise, as shown in a previous interior teaser photo, it looks like plenty of carbon fiber adorns the inside. The minimalist cabin also houses a large touchscreen unit in the center stack with four controls arranged in a vertical pattern below it. We can't make out what the dials and knobs may control, though. Elsewhere, it looks like diamond-weaved material sprawls across the cabin and yellow inserts provide a color contrast from the grays and blacks. 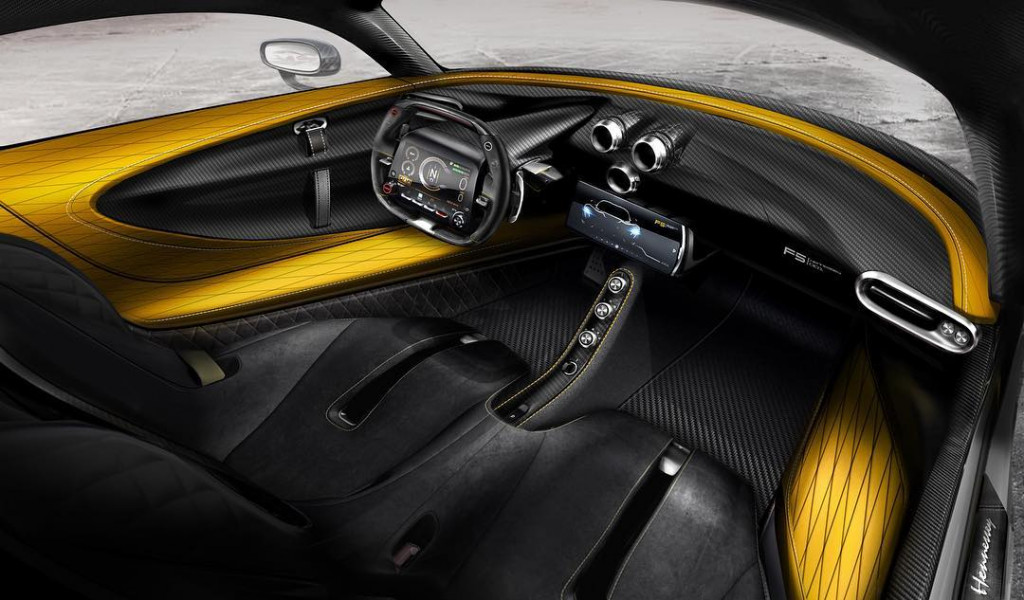 The HVAC vents still mimic the Venom F5's tailpipes, which feature a trio arrangement. Hennessey tossed the number three around quite a bit in the days leading up to the car's reveal; the company believes the car could clock a 301 mph top speed. Hennessey says the Venom F5 will weigh less than 3,000 pounds and house a new twin-turbocharged V-8 good for more than 1,600 horsepower.

Hennessey has yet to validate such performance claims, but the Venom F5 will face tough competition. Koenigsegg recently set a new top speed record of 277.9 mph with its Agera RS, which might be a tough figure to beat. Hennessey proved it can build a wild supercar with the Venom GT, but we'll have to wait and see what becomes of the Venom F5.